Are you ready to embark on an epic cruise adventure?

Which cruise is for you? >

Wondering whether a cruise holiday might be the right option for your next adventure? There are plenty of misconceptions about cruise holidays. Cruising newcomers often perceive cruises as floating retirement villages, or envision out-of-date fallacies based on watching the 60’s TV show ‘The Love Boat’. This couldn't be further from the truth, as cruises now rank amongst the most technologically-advanced holidays in the world, with every mod-con you could possibly want at your fingertips while on the seas.

The cruise industry has changed dramatically over the years - so to give you more insight into the contemporary cruise experience we’ve prepared everything you need to know about cruising in 2019 and 2020. A record year of new builds, new brands and new destinations has the world’s hardcore polar adventurers, high rollers and diehard cruise lovers eager to book their next trip. Here’s the lowdown on the latest and greatest in the wide and wonderful world of cruising.

Cruise Curious Deals: save on travel

Explore some of the world's most amazing locations on incredible cruise adventures. 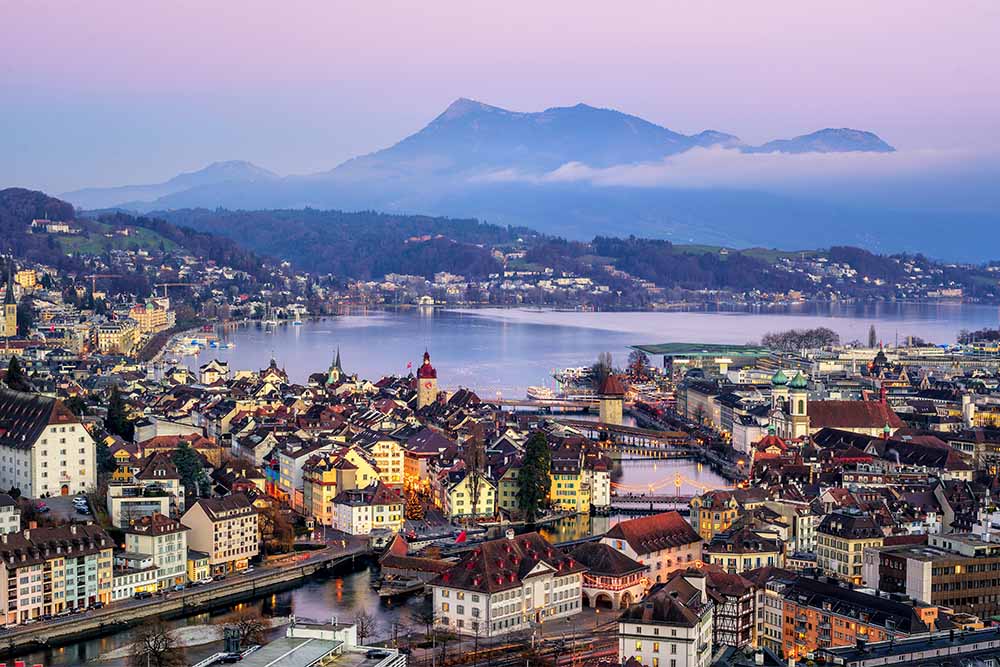 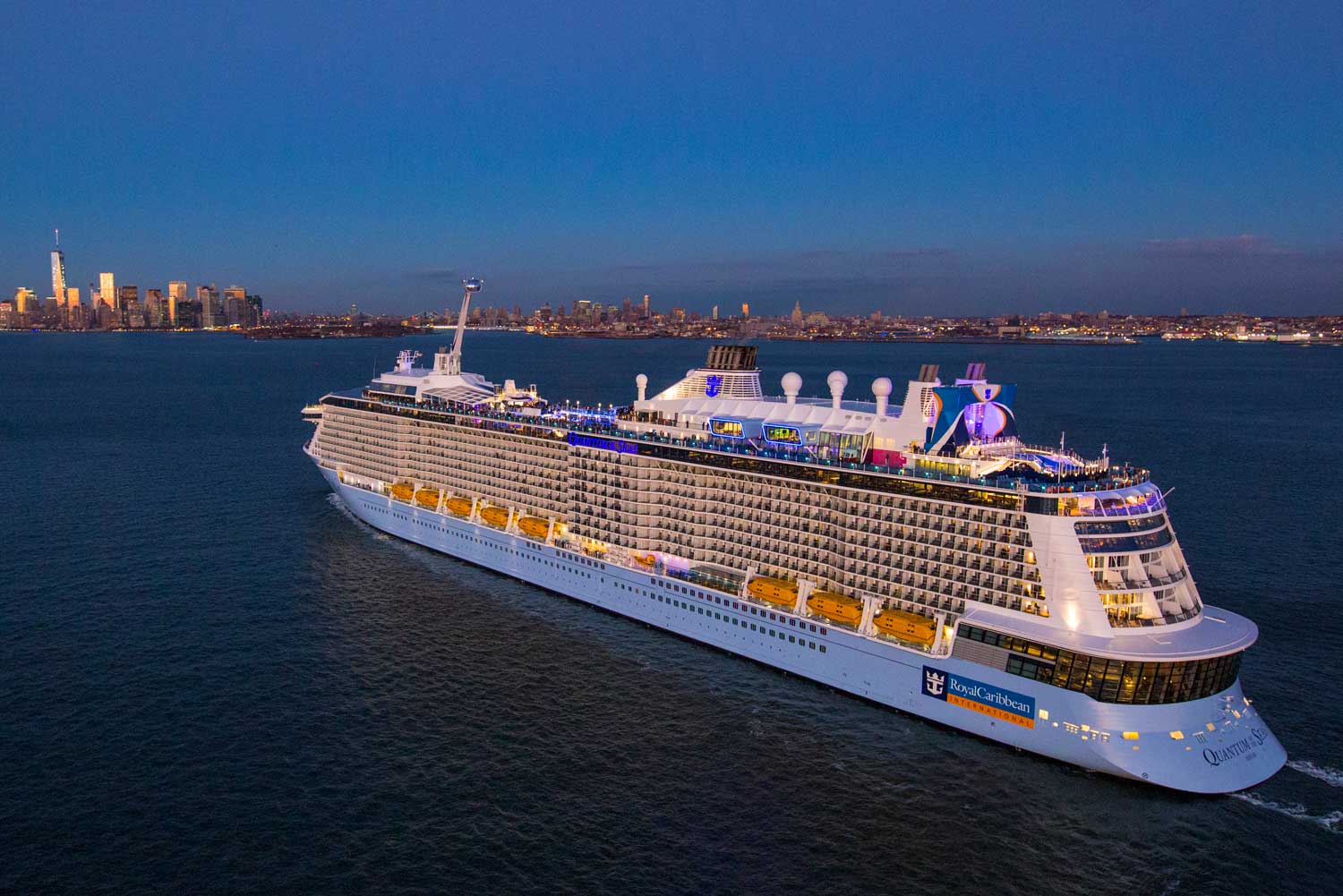 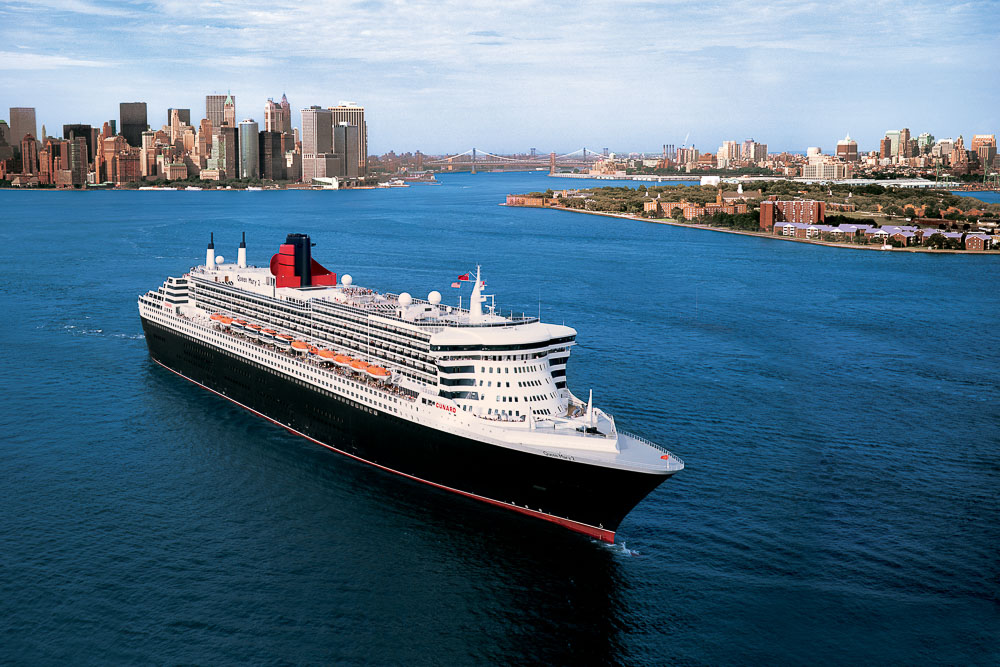 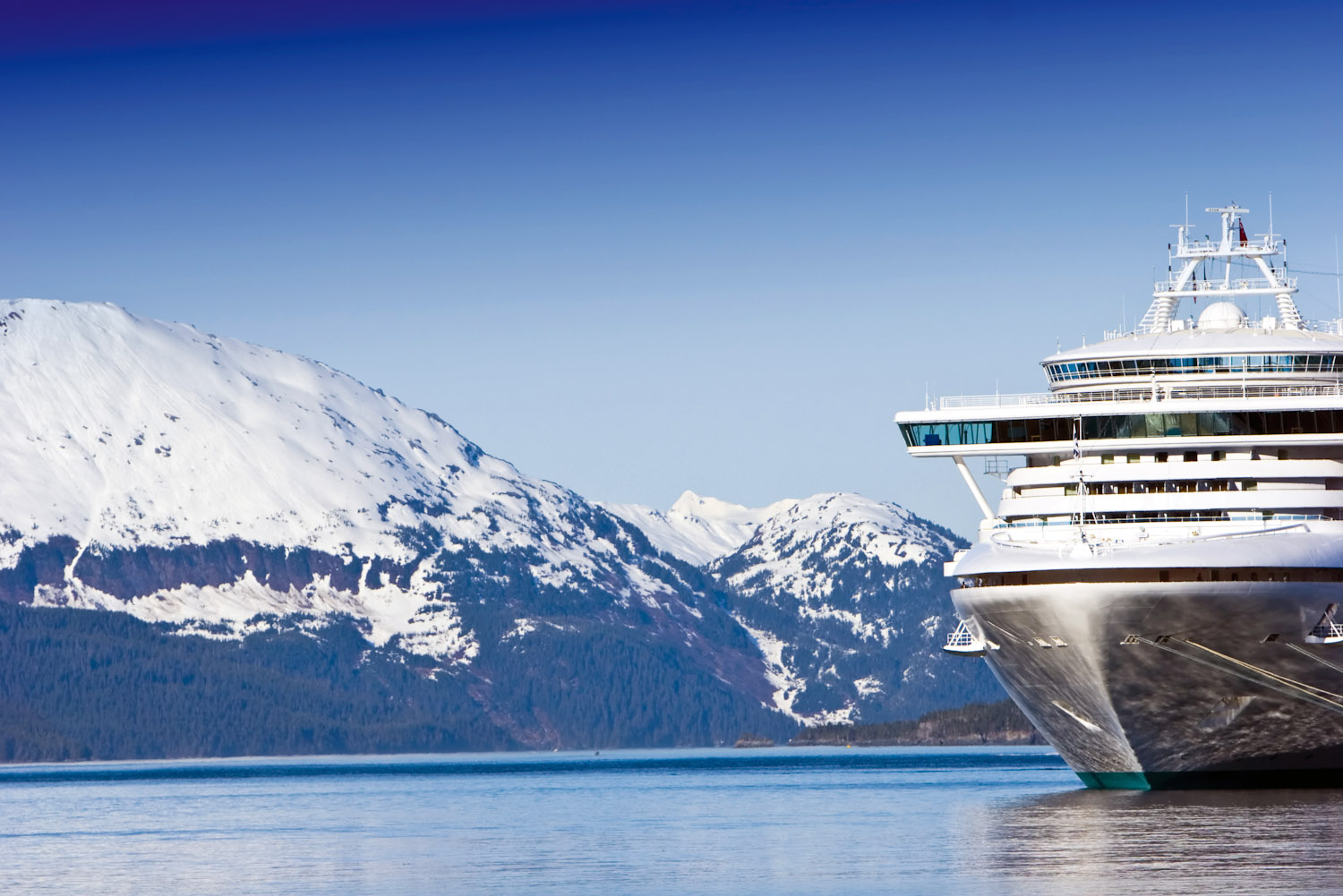 THE FRENCH have a wonderful expression for the high seas: ‘le grand large’. Everything about it expresses that stunningly vast expanse of ocean, the horizon ever distant, as you head off on a seabound adventure.

It’s a concept that is hard to grasp for those who’ve never travelled by sea, but that incredible feeling of ‘scale’ – of being so small, setting out on an ocean so large – can be enormously addictive. Particularly when you feel the power of a supership eating up the kilometres beneath you.

It’s little wonder, then, that there are lots of dyed-in-thewool cruise-goers whose journeys stretch longer and longer each year, some over 100 days and more. In August, the purported longest-ever continuous world cruise set sail on a 245-day circumnavigation of the world. Viking’s Ultimate World Cruise is taking in six continents, 59 countries and 113 ports, including 22 in-port overnights (to prevent cabin fever, we’re thinking) aboard the 465-stateroom Viking Sun.

With super-long itineraries and expedition cruising both clearly a ‘thing’, Silversea made some quite serious waves of its own this year as it announced a ‘world-first’ Expedition World Cruise in 2021.

While longer cruises are seeing a surge in popularity, some cruise lines are best suited, by their very nature, to a less lengthy epic journey. The boutique nature of Star Clippers’ tall ships, for example, means its version of an epic voyage is one of its 15-to-16-night ocean crossings. 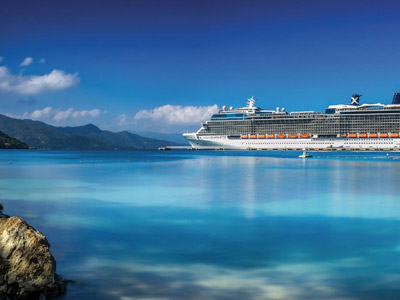 Experience the dreamy beaches of the Caribbean, the charm and history of Europe, the rugged beauty of Alaska or the marvels of the Galapagos Islands and discover the wonders of the world with a luxury cruise holiday. 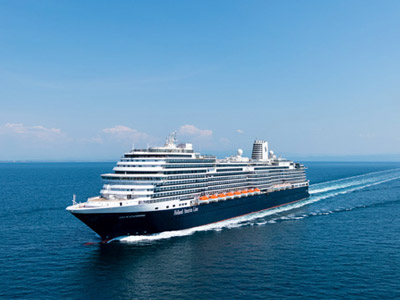 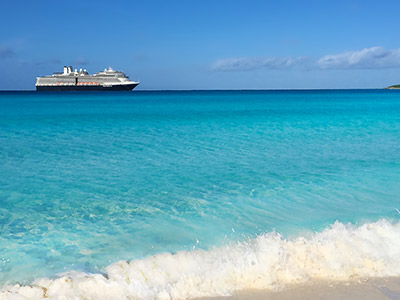 Holland America Line offers the best cruises to Alaska, Panama Canal, and Mexico. Find cruise deals to 14 unique holiday destinations and over 473 ports of call across the globe. 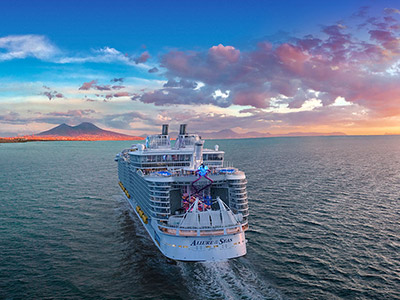 Royal Caribbean International is known for driving innovation at sea and has continuously redefined cruise holidays since its launch in 1969. 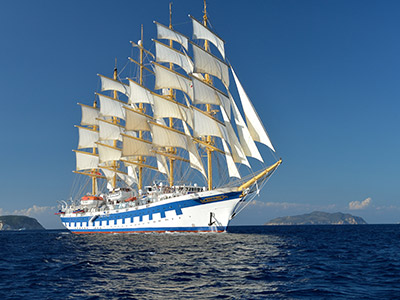 Tall ship sailing vessels in the Caribbean, Asia and the Mediterranean. Offers charters and a travel agent finder. 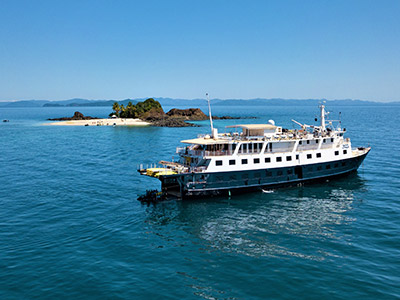 Small ships — hosting 90 guests, tops — fulfill unimpeded excitement about truly getting in the wild with a few nature-leaning souls. 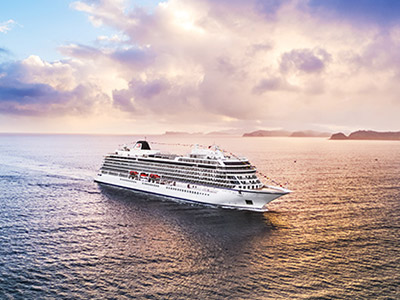 IN THE PAST, exploring the world by cruise ship usually meant compromising on some degree of comfort, with cruise accommodations and amenities considered something to endure rather than enjoy. Not so in 2019 and beyond, as nowadays the luxury cruise tier offers surroundings to rival even the world's best hotels.

The world of luxury cruising is now one in which high standards of personalised service and gorgeous suites are the norm. Sure, the raw pricetag may be higher - but when factoring in most luxury cruises also include high-end dining, upmarket shore excursions, technology packages and more, it's often a matter of added value rather than unnecessary cost.

On board, the array (and quality) of entertainment options scales as well. Butler service is not uncommon, and you'll typically have fewer people to share all this luxury with than standard cruise itineraries; luxury cruise ships are usually smaller and less crowded as a result.

Add in the ability to visit some of the world's more unique and exotic ports - ones which can't cater for the largest classes of cruise ships - and it all combines to make that extra dollar invested pay for itself in terms of quality of cruise memories you'll end up with. 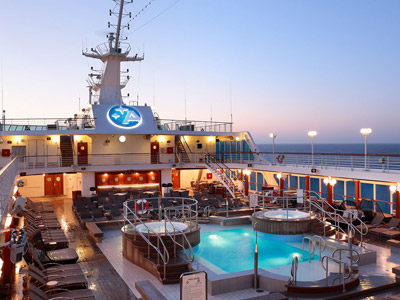 Aiming to be the world's top up-market cruise line, Azamara will not only take you to awe-inspiring destinations, but also give you more time to fall in love with them.

Holland America Line offers the best cruises to Alaska, Panama Canal, and Mexico. Find cruise deals to 14 unique holiday destinations and over 473 ports of call across the globe. 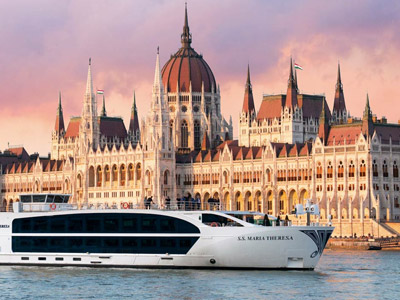 START THE DAY in the Pilates studio and return in time for your butler to lay out breakfast. An iceberg reshapes the horizon as you try out Nordic bathing, slipping in and out of temperature-controlled plunge pools on deck, then steam away in the indoor thermal lounge.

It’s time to spot polar bears from one of your yacht’s two helicopters, or dive below the pristine Arctic waters in a customised submarine before discussing your findings with an international marine expert over canapés and bubbles.

This is the new expedition cruising. And it’s very big news right now, with a gloriously extravagant levelpegging competition going on between some of the world’s top cruise lines, this year and well beyond.

With typically smaller ships designed to reach more remote corners of the globe, it’s a more intimate experience and itineraries are usually specialised to particular interests, often with expert speakers and guides (marine biologists, naturalists, anthropologists, nature photographers and the like) who also conduct immersive classes and workshops on board.

However wild and remote you decide to place yourself on the globe, adventurous, expedition cruising does not have to mean roughing it. It has come a long way, with a growing number of ultra-luxe ships now venturing to both polar caps, offering plush staterooms with premium amenities and fine dining. 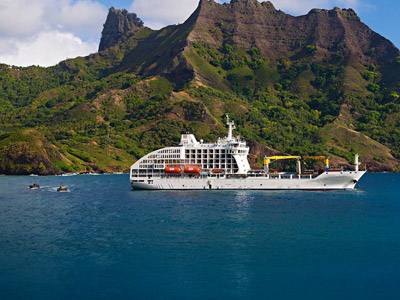 With an expert Polynesian crew, many of whom have been with the company for over thirty years, this soft adventure & cultural experience truly represents the journey of a lifetime. 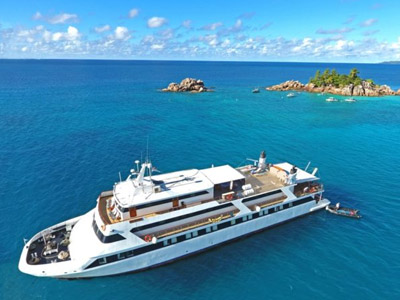 Along with a small group of travellers, join your Peregrine local leader, captain and crew to cruise the glittering waters of Croatia, walk the crater of a dormant volcano in Indonesia, or discover the conical roofs of Alberobello’s iconic dwellings. 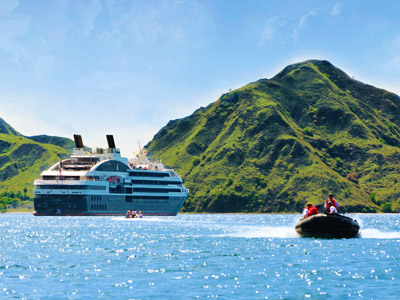 Discover the treasures of the land by sea on board luxurious yachts that are built on an intimate, human scale. 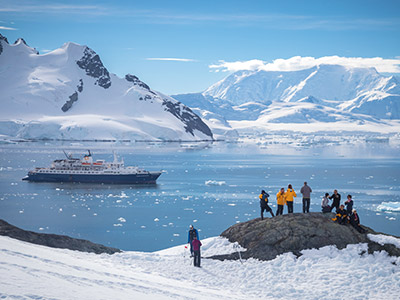 Quark Expeditions have been the leading provider of polar adventure travel for over 25 years and offer travelers unparalleled access to the most remote places on earth.

Small ships — hosting 90 guests, tops — fulfill unimpeded excitement about truly getting in the wild with a few nature-leaning souls.

THE MEGA WATERPARKS and glitz of the ocean liner set couldn’t feel further away when you are gliding smoothly down a lazy river, venturing to the more seldom-visited areas of Europe, Asia, India, or a surprisingly wide range of destinations.

Everyday life goes on around you, framed by your stateroom window, where you have a front row seat to the world’s waterways.

Smoother sailing, more intimate vessels and the advantage of docking often right at the door of your destination, all make a great case for river cruising. It’s the slow food movement in the smorgasbord cruising scene, still benefitting from the ‘unpack once but see it all’ part of a water-bound holiday, but with a quieter, simpler lilt.

The entertainment on a river cruiser will generally be of the conversational kind rather than the dinner-and-a-show variety, but with a trend toward wellness facilities on a lot of newer vessels, a massage and a jacuzzi while Europe floats by seems to be a rather satisfactory way to pass the time, too. 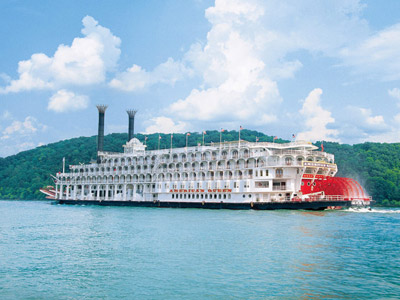 Experience the historic authenticity of the Mississippi River aboard the celebrated American Queen or the American Duchess & discover America from the indescribable perspective of the river. 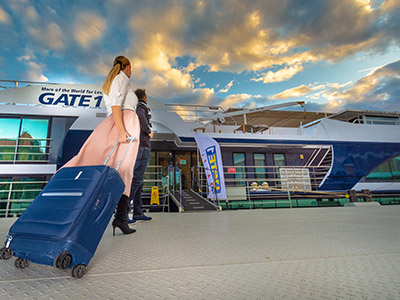 Join our journey on Facebook for our series of the best guides, features, deals and contests for everything about the incredible world of cruising.

Follow us on Instagram for a visual chronicle of the landscapes, people and places that you can encounter on a Cruise Curious adventure.

The World of Cruises

Save on Cruising - Limited Time Only

Get best deals and offers directly in mail