Pristine beaches, lush rainforests, fresh seafood and a tropical year-round climate: there are plenty of reasons this exotic archipelago in the south pacific is starting to pop up on many a traveller’s bucket list. Welcome to our Samoa travel guide.

With a rich culture that is over 3000 years old and natural beauty that leaves visitors awestruck, Samoa is a mere five-hour flight from the east coast of Australia.

So what are you waiting for? Here’s everything you need to know to plan a fabulous trip to this island paradise.

Samoa is about a 5-6 hour flight from the east coast of Australia.

The main entry point is Faleolo International Airport which is 35km from Apia on the island of Upolu.

Virgin Australia and Samoa Airways have direct flights from Brisbane and Sydney, or you can opt for Air New Zealand (via Auckland), or Fiji Airways (via Nadi).

If you want to get there in a more leisurely manner, there are a number of cruises from Australia that take in this part of the South Pacific.

Things to Do in Samoa 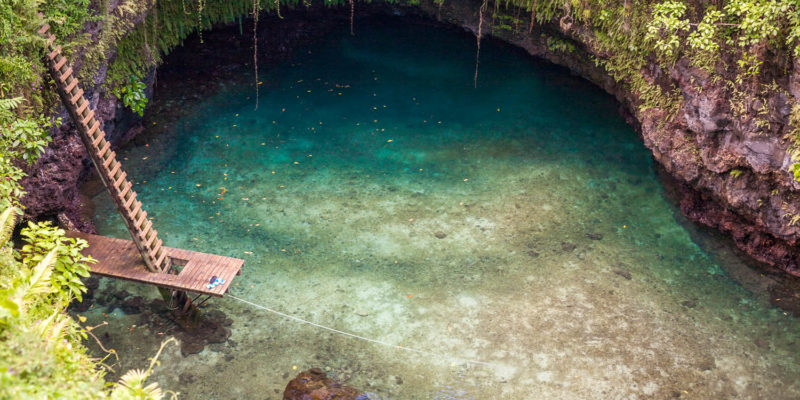 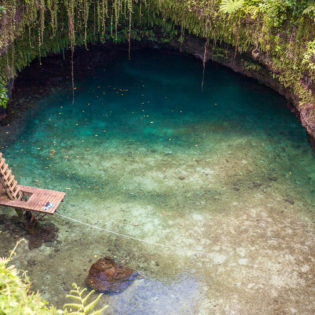 Samoa is the ultimate paradise island full of tropical wonders and luckily remains relatively untouched. Head off to ex...

Samoa’s biggest selling point is its breathtaking natural beauty. Its remote location in the South Pacific makes this one of the most untouched parts of the world.

The beautiful weather and the magical scenery make it a great place to explore the great outdoors. Cycling enthusiasts can hire bikes to take in the sites on two wheels (the roads here are in good condition) and keen anglers can explore one of the best gamefishing locations in the world.

Immerse yourself in local culture by taking part in a best gamefishing locations in the world, where you’ll feast on traditional food (think plenty of fresh fish grilled on coals and tropical fruits) and witness some truly magical song, dance and storytelling. A highlight of this ceremony is often the Siva Afi – an awe-inspiring fire knife dance.

Samoa is also the final resting place of famed Scottish author Robert Louis Stevenson. His beautiful mansion Vailima has been converted into a museum set within lush gardens and is open to the public. If you’re feeling adventurous, hike up to his tomb at Mt Vaea. The rainforests around the islands offer some magnificent hikes.

While there are plenty of activities to do in Samoa, make sure you take some time out to simply unwind on the glittering beaches. The blue of the water and the white of the sand will be seared into your memory.

Due to its tropical location, the waters here are teeming with life, making it perfect for snorkeling and diving.

This is one of the best places in the world to swim with turtles – around the shores of Namua Island is the most popular spot for this, though many tours of the island of Savai’i also stop at the wetlands sanctuary at Satoalepai village to allow guests to paddle with green turtles.

If surfing is your thing, make sure you check out beautiful Palolo Deep, which is a mecca for wave riders thanks to the world class reef breaks.

Samoa has two main islands – Upolo and Savai’i – and they both offer exceptional snorkeling and diving. The protective reefs around these islands create beautiful lagoons that are just perfect for exploring the rich marine life.

One of the most popular journeys is a trip to the village of Lotofaga to experience the To Sua Trench, which is often used as the hero-shot in many Samoa travel brochures.

This 30-metre deep crater is filled with sea water. It’s a picturesque spot for a swim, but adventurous divers can explore the underwater tunnel – only diveable at low and calm tide – that connects the trench with the sea. The trench is surrounded by beautiful gardens, making it the perfect spot for a picnic.

The fringing reef of Nuusafee also has a couple of popular sites – The Terraces, with schools of tropical fish, and the Garden Wall, a densely packed wall of hard corals where spotted eagle rays often float by.

The lush mountains on these islands deliver some of the most majestic waterfalls you’ll ever see. Awe-inspiring sites on the island of Savai’i are the Afu Aau Waterfalls and the spectacular Alofaaga Blowholes near Taga village.

A trip to Alofaaga Blowholes is fun for all ages. These naturally formed rock slides, worn down by thousands of years of running water, are about a fifteen-minute drive from Apia, Samoa’s capital. There’s a five-metre slide for dare-devils and three smaller ones for gentler folk. It’s a great spot to swim and cool off on the warmer days.

Piula Cave Pool in Upolu, beneath the historic Methodist chapel is also a great spot for a swim. 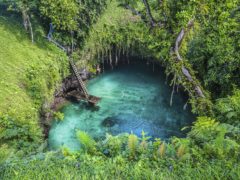 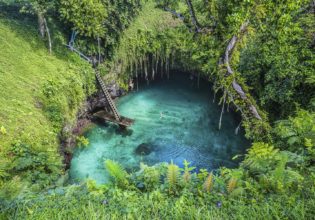 With its rugged beauty and vibrant, 3000-year-old culture, this South Pacific island paradise packs enough punch to have something...

Best Places to Visit in Samoa

Samoa consists of two main islands, Savai’i and Upolu. There are four smaller islands as well, though the two larger islands are the main tourist destinations.

Savai’i is Samoa’s largest island and is known for its laid-back way of life and pristine scenery. Attractions include lush rainforests, secluded beaches and mountainous interior.

Upolo, to the east, is home to the capital city Apia, which is bustling in comparison to the rest of the island’s villages. A trip to the colourful Maketi Fou, Apia’s local market, is a must. The array of local food on display will dazzle your tastebuds.

Namu’a Island, a short boat ride from Upolo is a great spot to visit if you really want to get away from it all. This is a good choice if you’re travelling on a budget, as there are some excellent cheap and cheerful accommodation options.

Sleepy Manono island, a 20-minute boat ride away is also a peaceful spot to visit for a few nights (or even a day trip). There are no dogs or cars here and the serenity is remarkable.

Samoa’s weather is warm and tropical all year round, with an average daily temperature of 29 degrees celsius and ocean temperature in the low 20s… so really any time of year will give you that blissful burst of warmth you’ve been craving.

Samoa has two distinct seasons – the dry season running from May to October and the wet season from November to April. Obviously the dry season is certainly the most popular time to go, as your beach frolicking won’t be hindered by rain. Cyclone season runs from December to March and is best avoided.

Samoa Dive & Snorkel have the local knowledge on the best places to get up close and personal with marine life, and they run reasonably priced tours.

Gain historical and cultural insight from a genuine Samoan High Chief as he takes you on a day tour of Namua Island where you can snorkel with turtles. The tour continues in the afternoon on the east coast of Upolu, where you visit the famous Lalomanu Beach, To Sua Ocean Trench and Sopoaga Falls. This is a great way to see the sights if you’re short on time.

Back of the Ute Samoa is another tour company offering a unique way to see the island… that is riding around in the cab or the back of a ute. They invite you to “see the country the proper way… wind in your hair, beer in your hand.”

Choosing Where to Stay in Samoa

There are plenty of different accommodation options to suit every budget, from traditional Samoan beach fales to luxurious beachside resorts and larger hotels in the heart of the city.

For a truly authentic experience it’s hard to go past the beach fales. Often located right next to the beach or lagoon, they offer a truly unique accommodation experience (and often at a bargain price that usually includes a delicious tropical breakfast and dinner).

During the day the fales are open-air, allowing the cool sea breeze in and offering incredible views of the ocean or lagoon. At night you sleep surrounded by a mosquito net, or if you want a little extra privacy you can close the walls by dropping a woven curtain down. There’s nothing quite like falling asleep to the sound of the ocean. If you’d like a slight upgrade, deluxe fales also offer air-conditioning and fixed walls.

But if you’d like a more traditional style accommodation, there’s plenty on offer…

Sa’Moana Beach Bungalows is one of the true family-friendly options, on the south coast of Upolu. There’s plenty to keep little ones occupied as you laze by the water with a cocktail.

Hotel Millenia in Apia is amid the hustle and bustle of Samoa’s capital. Here you’ll find good value for money and clean rooms in an excellent city location (there’s also a pool which is an added bonus in Apia).

The Samoan Outrigger Hotel is relatively basic, but full of old-world charm. Situated on the outskirts of Apia, it’s on the cheaper end of the spectrum, which makes it wildly popular with budget travellers. Be sure to book well in advance.

Saletoga Sands Resort on the south coast of Upolu is a family-friendly option. There is a broad array of accommodation options, and the hospitality is exceptional. The beach front location is a dream to see.

Taumeasina Island Resort is just 45 minutes from the airport and five minutes from Apia, but it feels worlds away. There are three excellent restaurants to choose from and an array of services and facilities including cooking classes, watersports, day spa treatments and a wonderful pool bar.