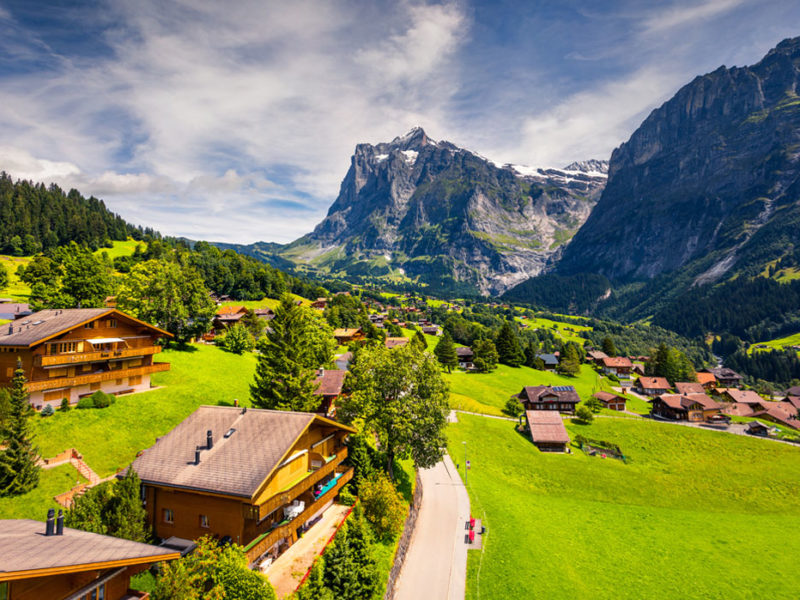 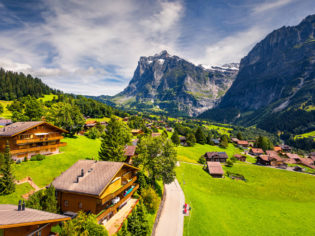 It may be the bear trek, but hiking Switzerland’s Bernese Oberland is anything but scary.

By the time I roll into the village of Meiringen, in the heart of the Bernese Oberland, my thoughts are fixed on the mountain adventures ahead. It’s mid-September and I’m in Switzerland for a self-guided hike that will see me ramble through the final weeks of the European summer. From Zürich Airport, it’s taken just two trains and three scenic hours to leave the country’s largest city and major transport hub far behind and cross into the Swiss Alps by rail.

Switzerland is a land-locked beauty. The entire country is about two-thirds of the area of Tasmania, yet has a whopping 451 peaks over 300 metres, with the vast majority above 2000. Bern – the second-largest canton (region) – is one of only three Swiss cantons with peaks above 4000 metres.

From Meiringen station, it’s a short, line-of-sight walk to the grand old Parkhotel du Sauvage where I meet my Via Alpina ‘Bear Trek’ hiking companions. There are five of us, with a 40-year age gap between the oldest and youngest in the group. Experience levels range from born-hiking to green-as-alpine-grass.

The Alps are Europe’s largest area of unspoiled nature, and the Via Alpina is an epic hiking and cycling network of over 5000 kilometres of trails, split into five routes and extending across eight alpine countries. Two of the five routes run through Switzerland: the red route – part of the long-distance trail – with a total of 161 stages, and the shorter green route, which runs in 14 stages and cuts through the centre of the country. The green route (the one we’ll be taking) stretches 390 breathtaking kilometres southwest from Vaduz – the capital of neighbouring Liechtenstein – to the resort town of Montreux. It takes in six cantons and crosses 14 of Switzerland’s most beautiful mountain passes.

Bear Trek is an eight-day section of the Via Alpina, and gets its name from the cuddly looking, ferocious animal that roamed wild and free here back when the Swiss Alps were less populated by people. Our group is set to do the so-called ‘charm’ version of the first four days of the Bear Trek – a gentler journey – overnighting in Meiringen, Grindelwald, Wengen and Mürren. 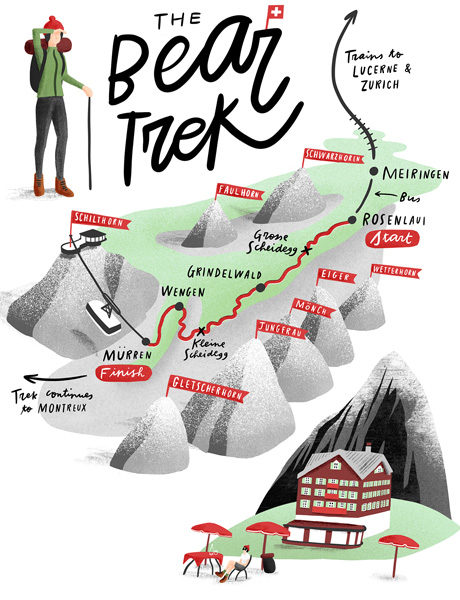 Even so, Justine is nervous. Despite having some hiking experience, she’s the eldest by 15 years and concerned she’ll hold up the group. Leyanne, however, is the most apprehensive – she might be a healthy late-40s, but admits she’s never hiked a day in her life. The rest of us, who are confident this will be a walk in the park, are pretty sure they’ll both be absolutely fine.

The clearly marked Via Alpina isn’t technically difficult, never goes above 3000 metres and is designed to be accessible for all walkers – at least when there’s no snow or ice (or bears or wolves) on the track. Our luggage is being transported between our hotels, and we plan to use public transport to shave some elevation off the uphill slogs. 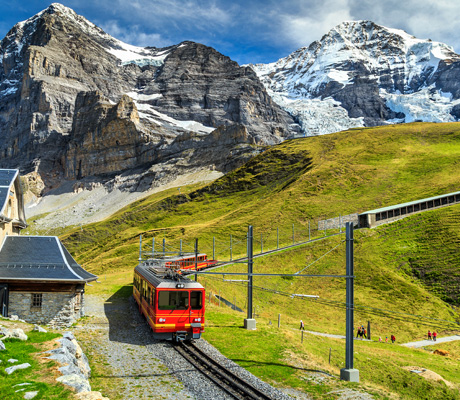 Going on a bear trek

Early the next day we join the light throng at Meiringen station to find our bus. It leaves bang on time, and winds so far up Scheideggstrasse that the road’s name changes, and even I am relieved to have avoided that relentless morning climb. At Hotel Rosenlaui it all begins: we cross the bridge over the babbling Reichenbach on foot and follow the wanderweg (trail) signs marking our path.

Before Switzerland became the model of economic stability and prosperity it is today, most of the population lived a challenging rural existence raising livestock, cultivating the land, making cheese and hunkering down over winter. The trail leading us up the valley passes isolated farmhouses, wooden barns neatly packed with hay, grazing cows with bells donging at their necks. Apart from the occasional sound of a bus horn and the sight of an e-bike, we could very well have travelled back in time.

This agricultural environment exists between natural stands of spruce and pine, wide pebbly riverbeds and boulder fields harbouring marmot (cuddly rodents). All day we’re overlooked by mountains with steep cliffs, snow-laden caps and glaciers. Wild blueberry bushes line the track in places and I gorge on them, bear-like, at regular intervals. 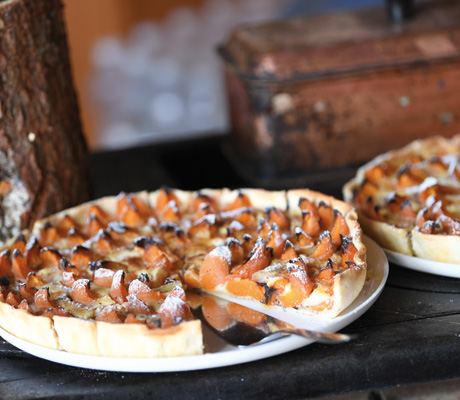 All that walking calls for a treat.

In this geologically dramatic country, trail signs tend to offer walk durations to upcoming features and food stops, rather than distances. After exactly two hours and 20 minutes, just as the signpost at Hotel Rosenlaui said, we reach Grosse Scheidegg. This 1961-metre pass is our highest point of the day. Justine and Leyanne are blown away that our group has arrived together within the forecast time frame.

At Berghotel, on the pass, we’re served lunch by a mountain woman with a hearty laugh. We order a platter of local cheeses and dried meats, and bowls of gerstensuppe – soup made with Swiss barley – with juicy smoked sausages on the side. From the display cabinet, we choose cremeschnitte (the Swiss take on vanilla slice) and zwetschgenkuchen, which literally means plum cake.

From lunch it’s downhill all the way to Grindelwald, where we divert from the trail and walk straight into four-star Hotel Kirchbühl – a classic wooden Swiss chalet adorned with cascading geraniums. My luggage is already in my room (cue sighs of relief). 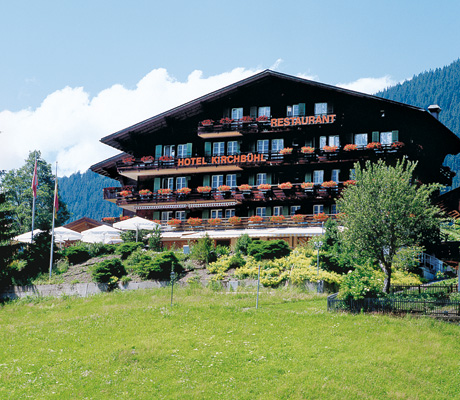 A group text informs me that, according to Leyanne’s activity tracker, we’ve taken 24,661 steps over 18.6 kilometres and climbed the equivalent of 171 floors, just today. Soon we’re all clinking cocktails on the hotel terrace and watching the red glow of the sunset sink down the north face of the Eiger.

The following morning, carrying only day packs again, we walk down into Grindelwald. This popular village and its surrounds are such a playground for activities including hiking, biking, trail running and via ferrata (climbing) that you could easily add an extra night to a Bear Trek itinerary. But we’re on a mission. From Grindelwald, we take a 20-minute train ride up to Alpiglen to, once again, avoid the morning ascent. 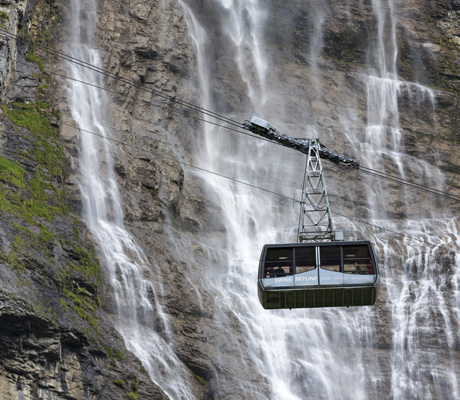 Take the Schilthorn cable car for 360-degree views
of the summit.

At the sunny pass of Kleine Scheidegg, a 2061-metre elevation, the restaurant we were counting on for lunch has closed for the season so we make a picnic instead. Nuts and biscuits from Meiringen, salami bought from a farm fridge the previous day, creamy Ragusa chocolate bars and fresh fruit are shared around the group. Lunchtime entertainment is a small avalanche in a steep crevice of the Jungfrau. By this stage, the faces of the Eiger, Mönch and Jungfrau are so ever-present they’ve become part of the group.

In the afternoon we negotiate the elevated landscape above the valley of Lauterbrunnen into which the waters of magnificent falls like Staubbach and Trümmelbach ceaselessly plummet. When we arrive at Restaurant Allmend, nestled in the forest, we stop for coffee laced with pear honey schnapps, topped with whipped cream, and generous slices of home-baked cake. By sunset we’re soaking our semi-tired bodies in the outdoor hot tub of Hotel Silberhorn’s spa while overlooking the mountainside car-free village of Wengen. 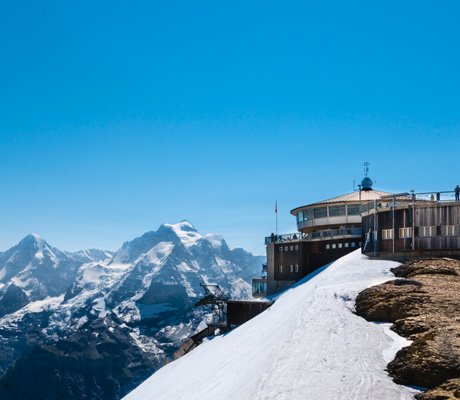 Take in the view from Piz Gloria at Schilthorn’s summit.

Instead of hiking to Mürren on the fourth day, we take a side trip up the Schilthorn, by cable car, for 360-degree views from a 2,970-metre summit. We’re well above the tree-line and, today, the clouds. While trekking the steep, rocky track from Piz Gloria down to the next cable car station, I keep my eyes peeled for ibex and mountain goats before we descend back through the clouds for an afternoon walking tour of Mürren and a fondue dinner at Chalet Hotel Alpenruh. 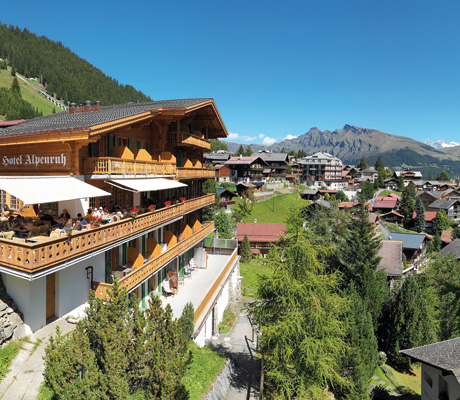 Hotel Alpenruh is your mountain home in Mürren.

From Mürren we’re all going our separate ways. One to Montreux, one to Andermatt, another to the village of Engelberg to ride a revolving gondola up Mount Titlis. One eager rambler even has a friend joining her for the final four days of the Bear Trek. Leyanne says she just wants to stick around and do it all again. 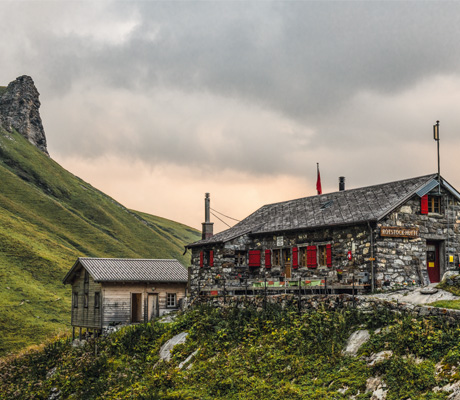 An up-and-down trail will take you to the quaint Rotstock-Hütte on your way to Mürren.

Me; I’m off to hike between high-altitude huts within sight of the Matterhorn. Despite the epic views since Meiringen, the next morning’s cable car ride from Mürren down over the cliff to Stechelberg takes my breath away.

Swiss International Air Lines, along with airline partners, offers daily connections from Sydney and Melbourne via Hong Kong, Bangkok and Singapore. The Swiss Travel Pass gives holders unlimited access to all of Switzerland’s public transportation system and up to 50 per cent off mountain railways and cableways.

In Zürich, Marktgasse Hotel in the Old Town is a contemporary boutique hotel set within a 15th-century building. It’s a short cobblestone-street away from the Limmat River and Rathaus tram stop.

Surrender to your carnivorous cravings at AuGust or head to the world’s oldest vegetarian restaurant, Haus Hiltl.

Local tour operator Eurotrek has been in the biz forever and will customise a Bear Trek itinerary to your specifications, transport luggage and accommodation preferences, and chuck in maps of the area for good measure. 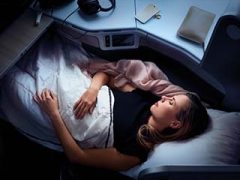 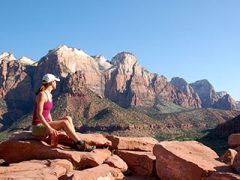 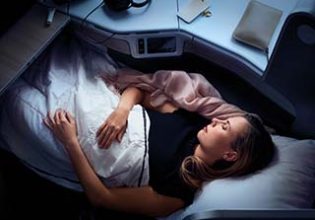 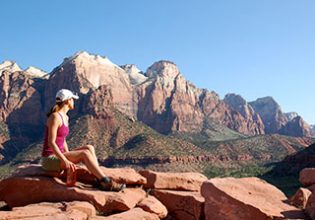