How to choose a Switzerland lake to love 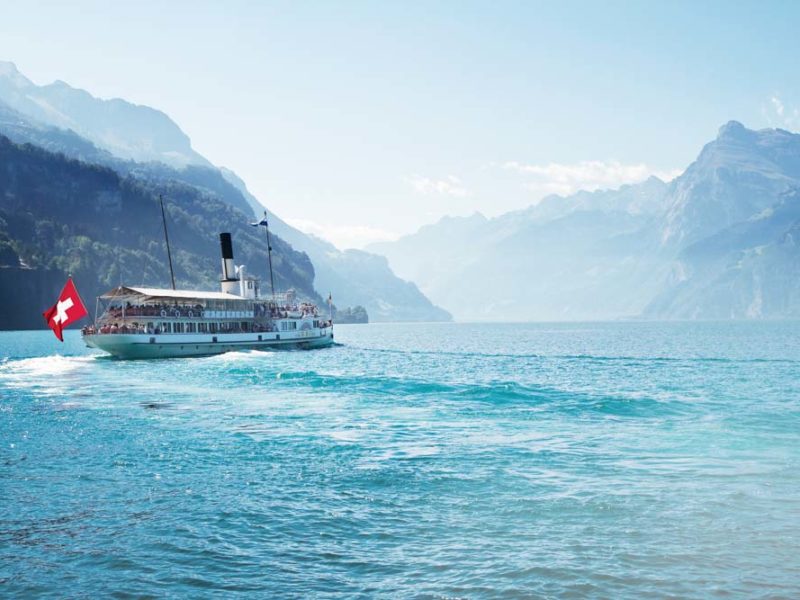 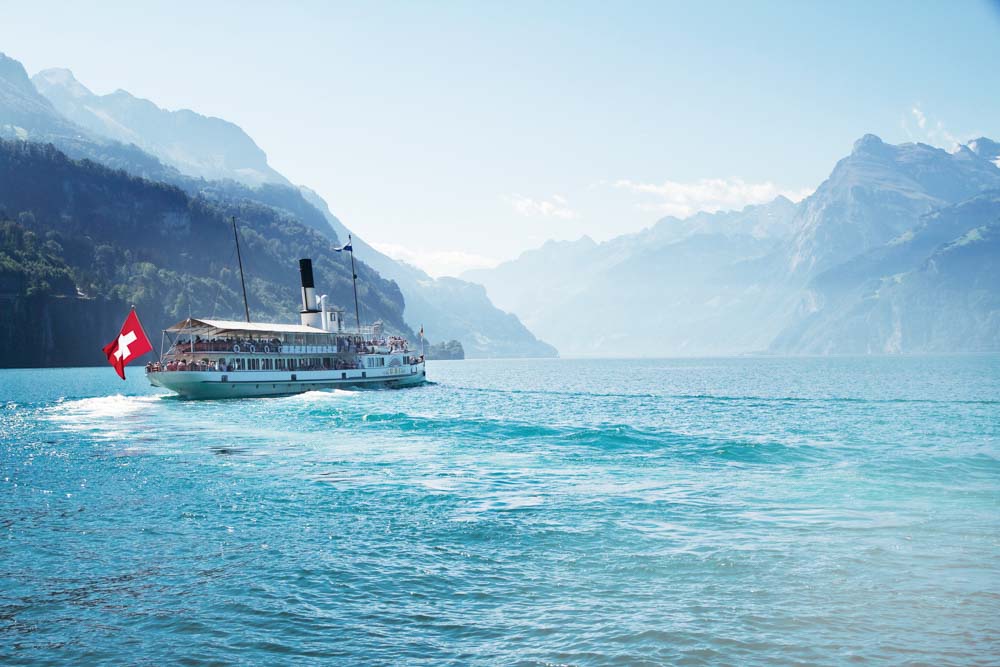 The Swiss flag waves proudly behind a 19th-century paddle-steamboat on Lake Lucerne.

Lined by medieval towns and shining mountains, the lakes of Switzerland offer a welcome point of difference to the usual seaside escapes. Linda Moon indulges in five of the best lakeside reveries.

Tinkling and streaming through mountain and meadow, water is omnipresent in Switzerland. Composed mostly of glacial melt and pure enough to drink from, about 1500 lakes dissect this ‘water tower of Europe’.

By turn mist-strewn and mysterious, wind-swept or sparkling, these lakes have as many moods as the sea.

Each lake has its own unique charms and activities and a bounty of water-based activities, from lakeside castles and vineyards to adrenalin-packed watersports and ladies-only baths.

Choose one that suits your own personal style, or visit them all.

Switzerland’s small geographic size and efficient public transport system means your next lakeside adventure is only a small distance away by any combination of rail, boat, bus or car.

And with summer’s rays lasting well after 9pm, there are more hours to enjoy this vibrant summer alter ego. 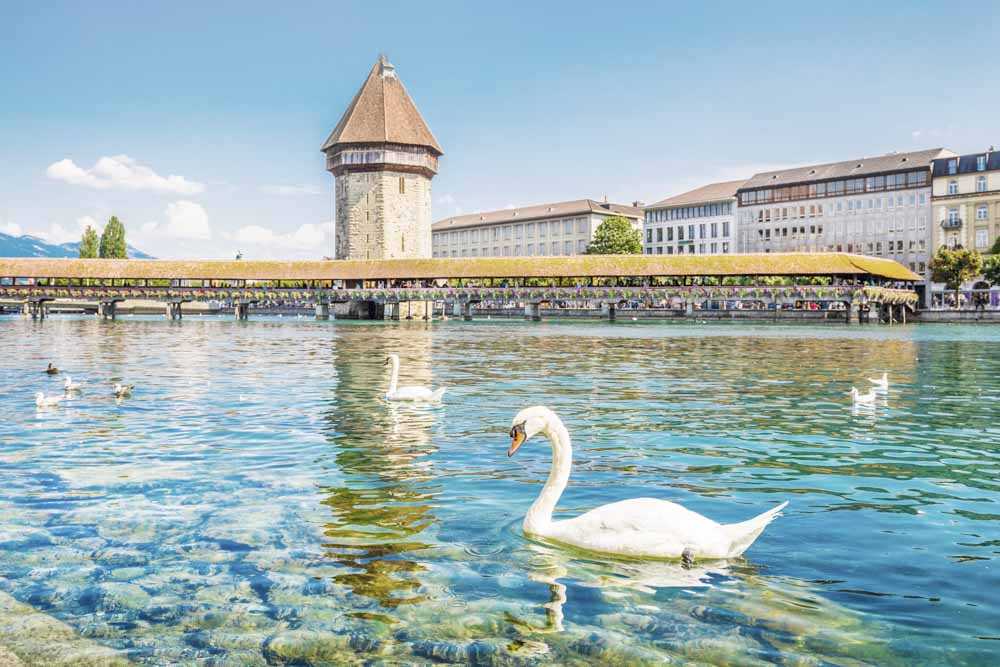 One of Switzerland’s well-known feathered friends glide along Lake Lucerne.

Bounding four cantons and shadowed by Mount Rigi and Pilatus in the Swiss Alps, 114-square-kilometre Lake Lucerne is the principal lake of Central Switzerland.

Clustered at its shores are market squares and cafe-strewn terraces, skating and bicycling paths. Adorned by swans, geraniums and medieval towers and bridges, lakeside is where all the action is.

By boat is the best way to enjoy Lake Lucerne’s appeals. Aboard a 19th-century paddle-steamboat, we catch glimpses of freshwater fjords, villas, castles and mountains.

At the lake’s far eastern end lie the Lorelei swimming islands – a man-made archipelago at Flüelen. You can also hike the historic Swiss Path, a 35-kilometre lakeside trail.

At sunset, gaze down on the lake from one of many elegant eyries such as the Château Gütsch, or the Rigi Kaltbad Mineral Baths & Spa. 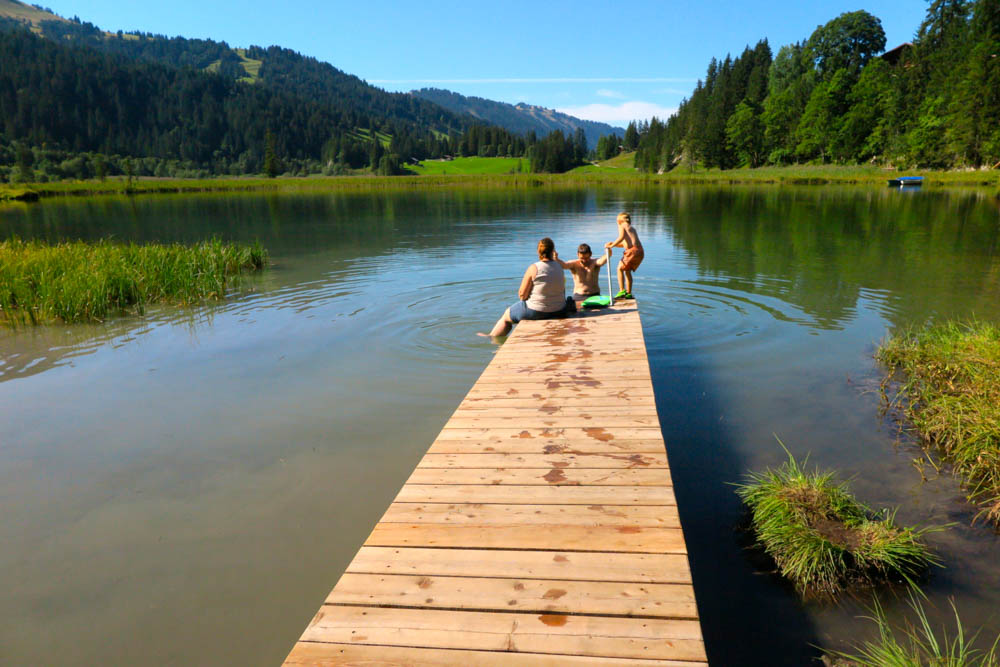 Hauntingly beautiful and remote, Lake Lauenen lies at 1381 metres among pristine scenery in the Lauenen valley, a high alpine meadow.

Here within the Gstaad-Saanenland region of the Bernese Oberland, it’s a designated nature reserve popular with hikers.

Along the three-kilometre loop trail around the lake, the River Gelten bubbles, a waterfall (the Geltenschuss) tumbles 200 metres, and great mountains, including the 3237-metre Wildhorn, shadow you as you wander through giant reeds, gossamer cotton grass, heather, moor meadow and fir trees.

Above, the Gelten Hut – a further two-hour hike – peers down from impossible heights. Emerging from the serenity, the sight of swimmers frolicking in the lake creates a more ebullient mood. 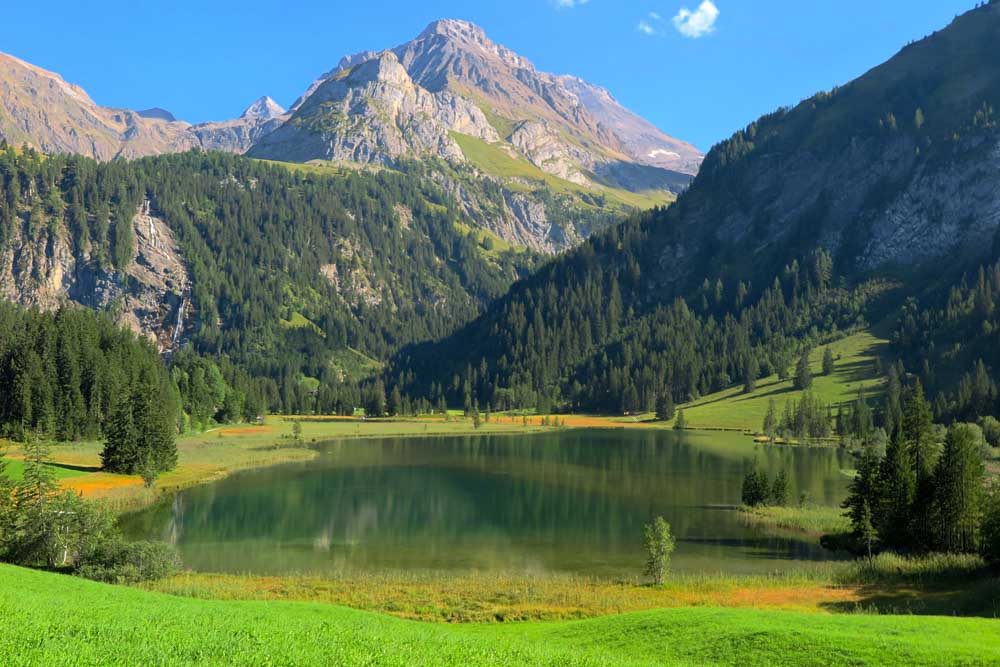 It’s also possible to cycle, mountain-bike or hire a rowboat to cross the lake. In winter the water freezes over and is the site of wildly romantic sleigh rides.

Most travellers access the lake via car or public bus from Gstaad or Bern, or hike four hours through alpine meadow from Mount Wispile.

When you tire of the seclusion, if that’s even possible, head the four-odd kilometres back to the resort chalet village of Gstaad.

Lake Brienz: a jewel in the mountains 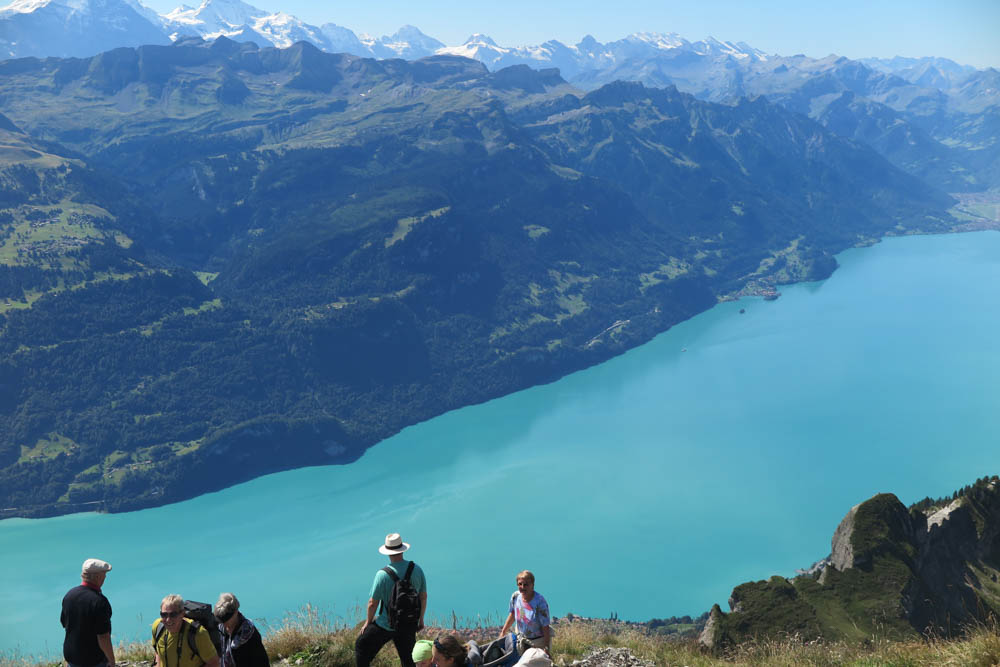 Hikers take in the view of the shimmering Lake Brienz. Located in the Bernese Oberland of Switzerland.

At the base of towering mountains, including the mighty 3454-metre Jungfrau, Lake Brienz shimmers like liquid topaz in the Bernese Oberland, the region already known for its striking scenery.

Edelweiss and other wildflowers stud the paths as we climb the highland trails above the lake among snow-dusted peaks.

Below, on the Brienz-Rothorn railway, Switzerland’s oldest steam-powered cogwheel train chugs along beside the water.

On and around Lake Brienz there’s plenty of action, from picturesque hikes to the Giessbach Falls or bicycling around the lake, to cruising, boating, bungee jumping, canyoning and river rafting.

During summer, culinary-themed cruises on Lake Brienz include a ‘Fondue Boat’.

Skirting the lake, traditional villages such as Bönigen, Brienz (famed for its wood-carving and quaint laneways) and Iseltwald (a fishing village) add charm and opportunities for alfresco dining, window-shopping and more.

Feast in fish restaurants on the water’s edge or try traditional alpine pasta (Älplermaggronen) atop the mountain
at Rothorn Restaurant. 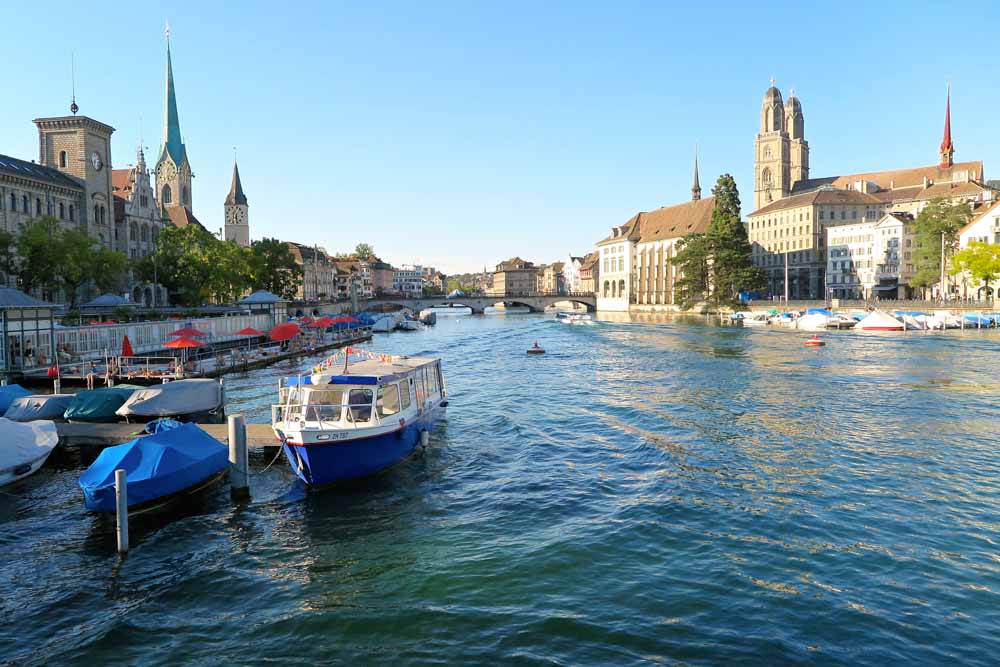 The terrace at Quai 61, one of many restaurants and bars that fringe the lake, proves a good way to hang by the water prior to a dip at the Art Nouveau women’s Stadthausquai river pool.

There’s plenty of options for chilling in the water with 30 lake and riverside bathing facilities and almost 20 open-air swimming baths, including the Tiefenbrunnen swimming beach (with a 62-metre-long lake slide) and sunbathing on wooden platform islands erected in the lake.

At night many of the waterside baths transform into badi bars (barefoot bars) where you can drink, dance or enjoy live entertainment.

Options for exploring the lake range from solar-powered boats to aqua scooters and steam paddleboat cruises.

A leisurely four hours by boat, Rapperswil, known as the ‘rose town’ for its 15,000 roses, lies at the far eastern end of Lake Zurich. It’s also the site of the Alpamare, the largest covered water park in Europe, with 11 giant slides, a wave pool, thermal pools, and a wellness zone. 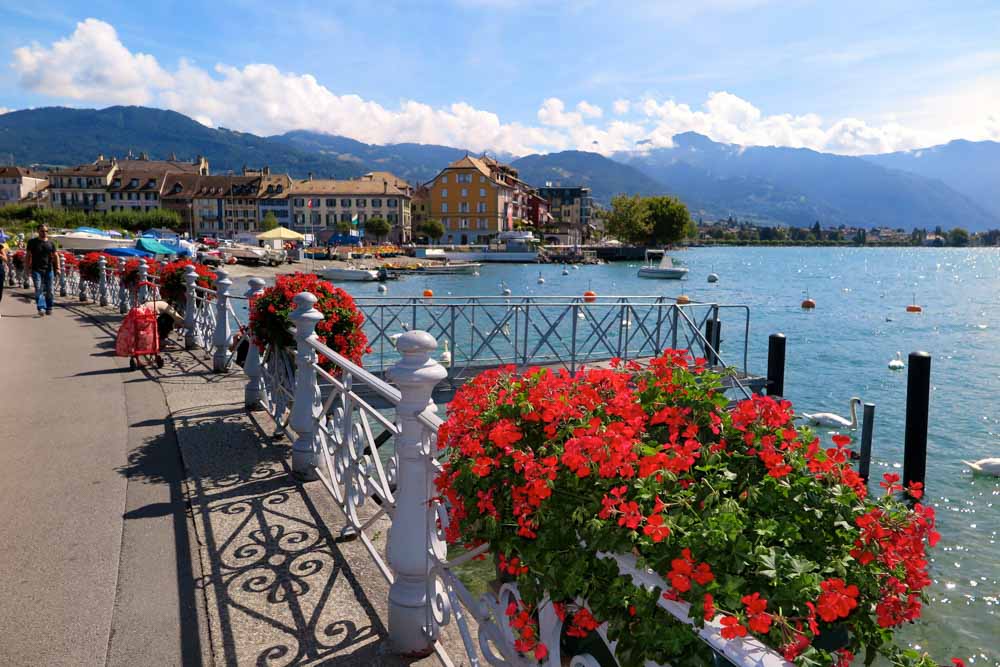 Red geraniums along the promenade of Lake Geneva.

In the French-speaking part of the country, Lake Geneva, Europe’s largest lake, basks in a Mediterranean climate, its shores painted with geraniums, petunias and roses.

The eastern section between Vevey and Villeneuve is known as the Swiss Riviera. Here, outdoor eateries and sculpture add to the alfresco lifestyle, and we stroll the lakeside promenade and browse mushrooms, berries, cheeses and other fresh produce at Vevey’s lakeside market.

We board the aptly named Vevey, one of eight charming heritage paddlesteamers, circa 1907, that cruise the lake. 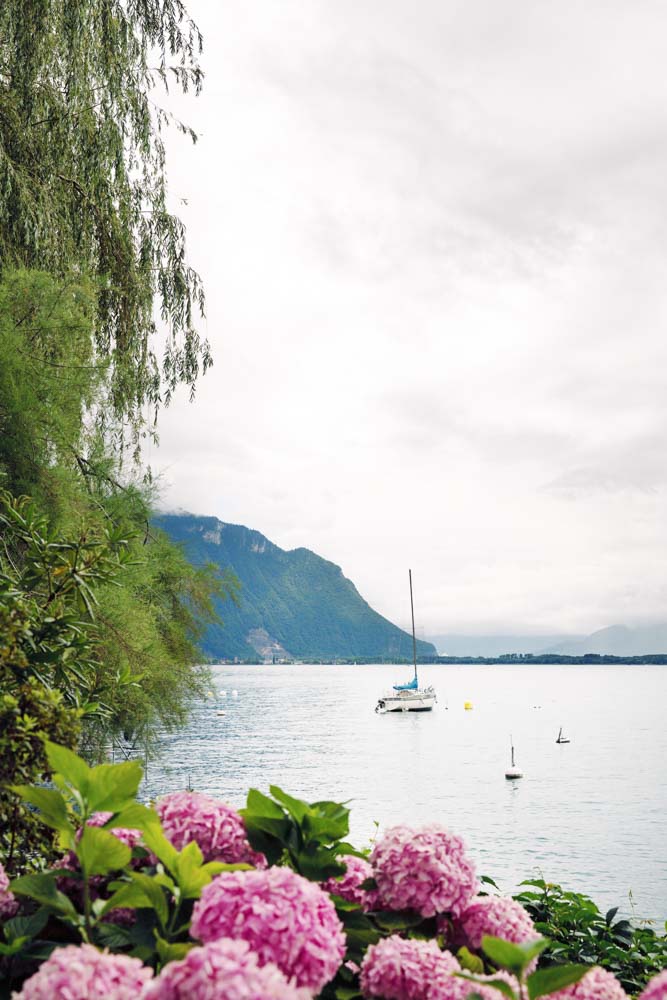 Blooms on the shores of Lake Geneva.

It’s the perfect time to sample Chasselas, the signature wine of the region, amid the vast, blue 581-square-kilometre lake as glimpses of France, shore towns and the mountains of Vaud slide past.

Thirty kilometres of UNESCO World Heritage-listed vineyards, dating back to the 11th century, line the steep banks (the panoramic vintage tourist train, the Lavaux Express, is a great way to explore once you are back on dry land). Our own tour concludes at Chillon Castle, one of the lake’s most imposing attractions.

Where to stay (and eat) while you’re there