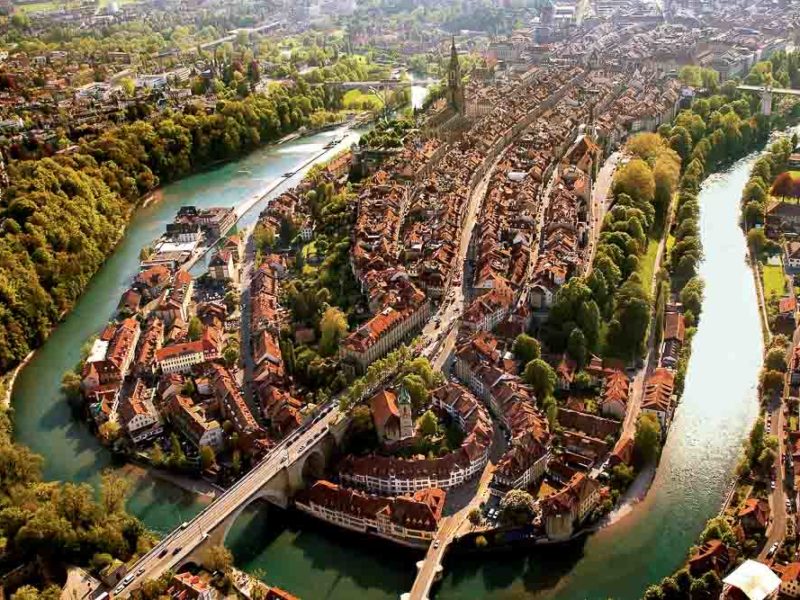 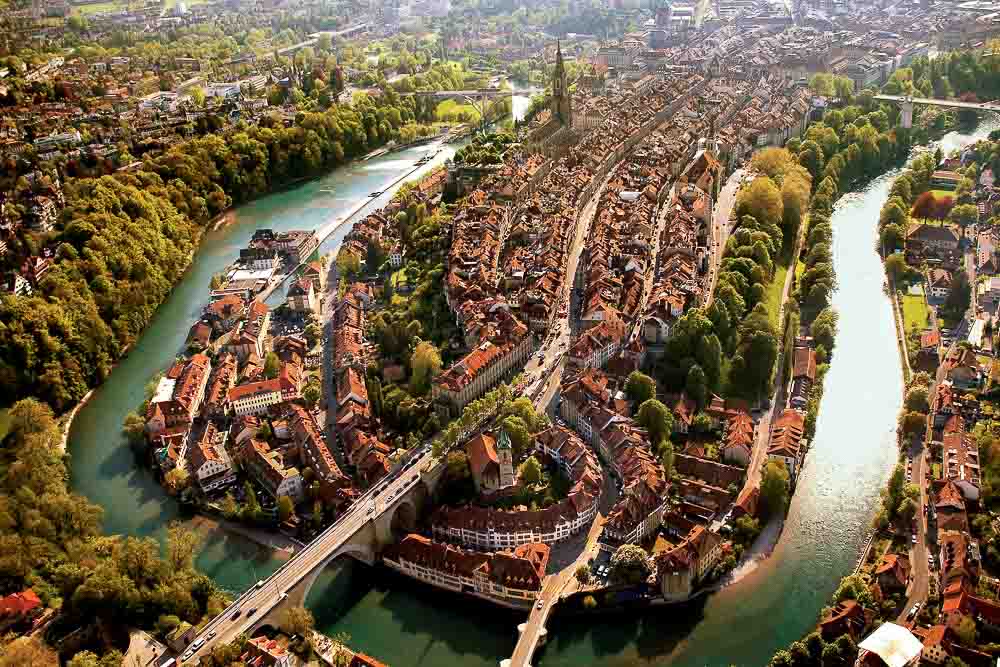 The Old Town comes to life around the Aare river, Bern, Switzerland.

The Swiss capital, Bern, is a delightful mélange of history, politics, great coffee and ghost stories, discovers Leigh-Ann Pow. Come find out the where and how…

One of Bern’s most famous sons, the artist Paul Klee, is feted at the Zentrum Paul Klee, an architectural masterpiece of undulating lines by Renzo Piano situated among green pastures just outside the city. The museum houses around 4000 of his works; you can also take a side trip to the nearby Schosshalde graveyard, where Klee is buried.

Albert Einstein may have been born in Germany, but he was one of Bern’s most famous residents and published his Theory of Relativity while living here. The flat he rented from 1903 to 1905 at Kramgasse 49 has been restored in the style of the period and is open to the public as the Einstein House museum.

Bern is one of the best-preserved medieval cities in the country, and the Old Town (a UNESCO World Heritage Site) is an absolute delight to explore. Lose yourself in its covered walkways and intricate fountains, topped with colourful figures depicting heroes and historical events of the Middle Ages, and make sure you check out the macabre Child Eater Fountain or Kindlifresserbrunnen at the Kornhausplatz. Start at the Zytglogge (clock tower) and work your way towards the river, then cross the Aare River via the Nydeggbrücke (bridge) to get a view back at its beauty.

If you are a culture vulture and plan to fill your time in Bern’s many museums, a small fee buys you a 24- or 48-hour Museum Card and thus unlimited free entry throughout the city. You can purchase these from your hotel or from Tourist Information staff at the main station; the added bonus is each card covers two children under 16 at no extra cost.

Altes Tramdepot has views of the Aare River and the Old Town, and its eclectic menu encompasses Swiss classics as well as French and Asian offerings. But the real appeal is in the homebrews, which are conjured up in giant copper vats in the middle of the restaurant. The spectacular Kornhauskeller, with its vaulted ceilings and frescoes in Bernese High Baroque style, is a treat as much for the eyes as it is for the belly with its menu of Mediterranean cuisine.

Bern is a shopping paradise come snow, rain or shine thanks to its wonderful covered arcades in the medieval Old Town. There are myriad boutiques, galleries, cafes and wine shops tucked in underneath them or intriguingly located below street level in old basements. Stroll them at a leisurely pace.

Bernese natives Nicole Verbeek-Burri and Evelyne Pfeffer, the design duo behind local fashion label PAMB, are committed to making uncomplicated fashion that can be worn from day to evening, and makes a woman feel appropriate and beautiful no matter her shape or size.

The sweetest souvenirs of the city (literally and figuratively) are Mandelbärli, little almond teddy bears reflective of the city’s ursine emblem and styled on the bear dance portrayed on the medieval bell of Bern’s Holy Spirit Church. Shop for flavours including chocolate, honey and lemon, and classic vanilla at Beck Glatz.

Beloved of local coffee aficionados, Adriano’s Cafe Bar bustles at just about every hour of the day: the coffee beans here are roasted in-house making it the perfect choice for a morning hit. At lunch there are bagels and sandwiches with a focus on organic produce and interesting combinations, and at night you can choose from one of its homebrews.

Hotel Marthahaus Bern is located in a quiet residential area only a 10-minute walk to the centre of town, with a guest kitchen, free wi-fi and complimentary breakfast, as well as light, modern rooms.

Located in a 500-year-old building ‘99 steps away from the clock tower’, the three-star Hotel Restaurant Goldener Schlüssel Bern has rooms decorated in modern style and a restaurant downstairs serving hearty Swiss cuisine.

The official hotel of the Swiss government, the Bellevue Palace is classically grand, with beautifully appointed rooms and various dining options, a cigar bar and spa, all in the heart of the city.

Bern’s long history of battles and plagues and intrigues has left the city with its fair share of spooky stories; the best way to hear them is on Get Your Guide’s 90-minute tour of the spooky Bern. Taking in the Old Town at dusk, the guide tells stories of haunted houses, restless souls and the ‘legend of the white mist’. Goosebumps guaranteed.

MORE… Yoo-hoo! – the rest of Switzerland is waiting!