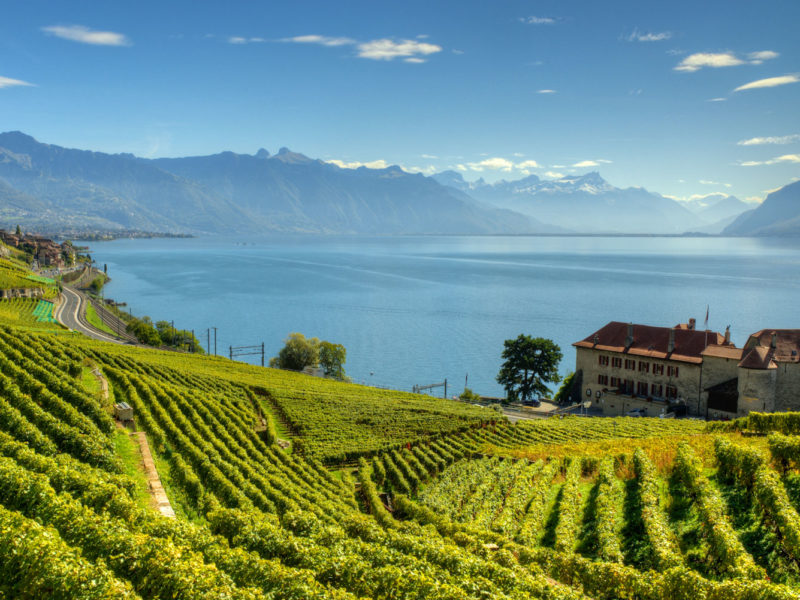 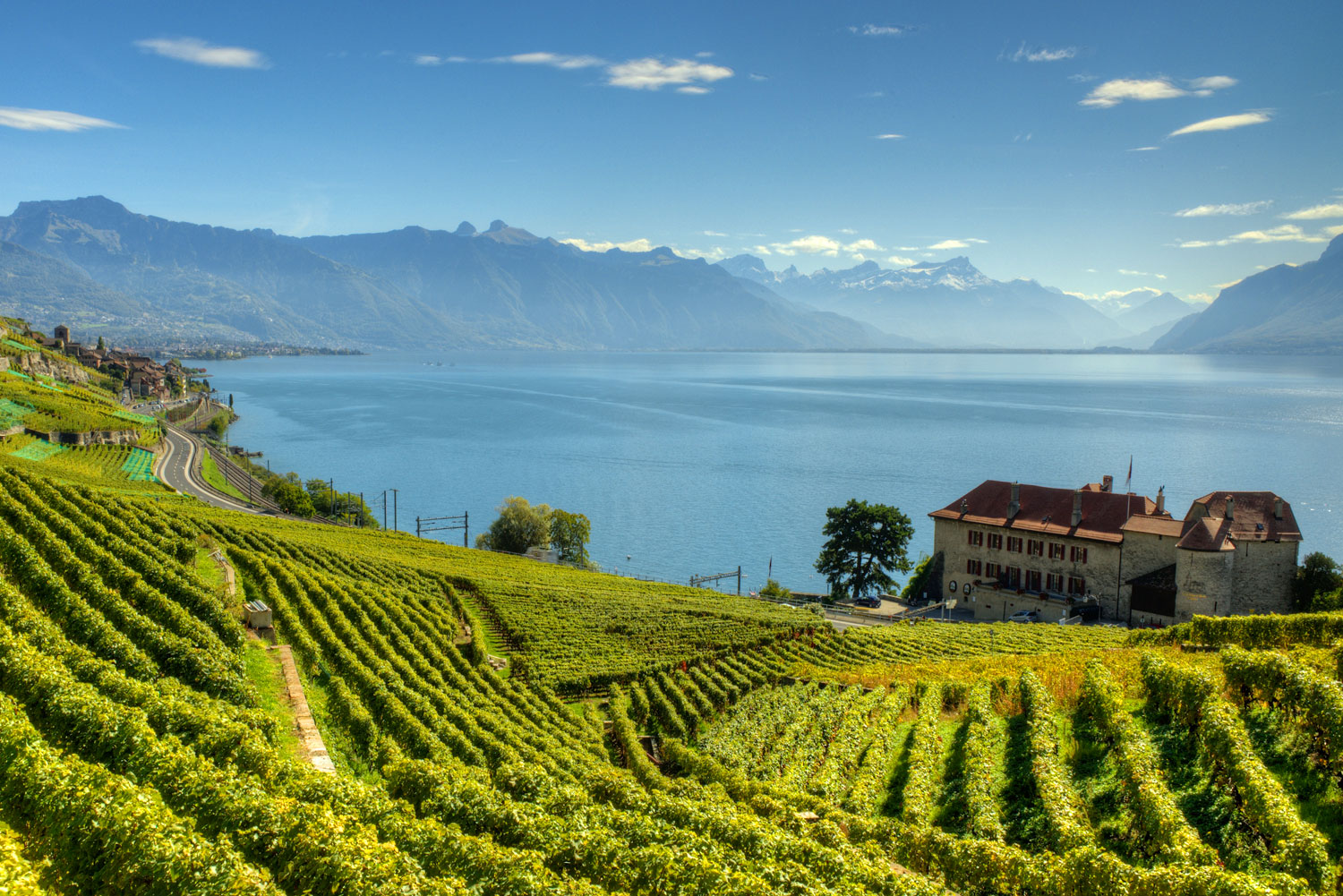 From sparkling glaciers to medieval villages and buzzing cities – there’s no shortage of sights and delights along Switzerland’s ultimate self-drive experience, the Grand Tour of Switzerland. And for a taster, here are a few of our favourite stop-offs.

1. Explore the city of culture and connoisseurs

Situated on the borders of Germany, France and Switzerland, it’s an eternal favourite among travellers, enticed by its beautiful Old Town, nostalgic bathhouses on the Rhine river and world-class restaurants aplenty.

So if you fancy yourself a culture vulture of sorts, Basel is a must-visit on your Grand Tour itinerary.

2. Stand atop a giant natural amphitheatre

Creux du Van, as it’s known, is a rocky cirque in the Val de Travers district, spanning over a kilometre wide and 150 metres deep.

The result of water erosion from a local glacier that caused landslides in the semi-circular shape you see today, this natural amphitheatre is also a haven for wildlife, including mountain goats, marmots, deer, birds of prey.

A must for nature lovers!

3. Stroll (and sip) your way around Switzerland’s most scenic vineyards

Of the five wine areas in Switzerland’s Vaud region, the UNESCO World Heritage-listed Lavaux Vineyard Terraces (between Lausanne and Montreux) is undoubtedly the most spectacular.

Here steep terraced vineyards stretch along the northern shores of Lake Geneva, with some vine terraces tracing as far back as the 11th century.

You can follow the 32-kilometre footpath (comprising seven smaller circuits) around the vineyards, from the eastern outskirts of Lausanne to the Chateau de Chillon, complemented by information panels along the way.

Then reward yourself afterwards by sampling local one at one of the authentic wine cellars nearby.

4. Step back in time in the Medieval town of Gruyères

At the foot of the Pre-Alps is the enchanting medieval town of Gruyères, set at the top of 82 metre-high hill that overlooks the Saane Valley and the Lake of Gruyère.

Best known for the delicious namesake cheese it produces, Gruyères is also characterized by its architecture, seemingly unaffected by time.

Towering above its car-free cobbled streets is The Château de Gruyère, dating back to the 13th century.

Today it’s a museum depicting 800 years of regional architecture, history and culture, while the nearby Château de St-Germain houses an exhibition of images and sculptures from Swiss Oscar-winning designer, H. R. Giger.

5. Board the highest railway station in Europe

In the heart of Switzerland is the Jungfraujoch (also known as the ‘Top of Europe’), which claims the title of highest railway station in Europe, located 3454 metres above sea level.

A popular journey for thrill-seeking travellers, the Jungfraujoch train ride leads through the Eiger and the Mönch peaks, giving those on board access to an alpine wonderland of ice, snow and rock, best viewed from the viewing platforms along the way.

With its seemingly never-ending moors and rugged karst landscapes, it’s little wonder why Entlebuch was designated by UNESCO as the first biosphere reserve in Switzerland.

Explore the area via one of the many scenic hiking trails, then indulge in a nearby mud bath.

7. Follow in the footsteps of Switzerland’s famed freedom fighter

For a taste of Swiss history, pay a visit to Rütli – a mountain meadow on Lake Lucerne in the canton of Uri, where the oath of the Rütlischwur is said to have occurred, which was the legendary turning-point in Switzerland’s pursuit of independence.

Every Swiss National Day (August 1), the oath is re-enacted to commemorate the forming of the Old Swiss Confederacy.

It’s here you’ll also find the Schillerstein rock, which according to legend, is where Swiss freedom-fighting hero Wilhelm Tell jumped off a boat to escape the brutish Austrian governor Gessler.

For the full experience get on board one of the regular boat tours, departing from Brunnen and visiting the most significant historic sites around Urner Lake; the Tell Chapel, Tell Monument and the Tell Museum.

There’s never a dull moment in Zurich, home to the highest concentration of clubs in Switzerland, the country’s most famous shopping mile, over 50 museums and more than 100 art galleries, among a plethora of other cultural offerings throughout the city.

Alongside Zurich’s cosmopolitan appeal is its medieval backdrop, featuring the Old Town, medieval houses, historic narrow lanes as well as public buildings from the Renaissance period, adding to the charm of this entertainment hotspot.

For fans of the world-famous children’s book by Johanna Spyri, Heidi, the small wine-growing holiday region of Bündner Herrschaft is a must.

Situated in the northernmost corner of Graubünden, at the centre of Bündner Herrschaft is the town of Maienfeld – the fictional hometown of the novel’s protagonist, Heidi.

10. Frollick through a nature-lover’s paradise

The Swiss National Park, covering a mighty 170 square kilometres in the Engadine, is the oldest national park in the Swiss Alps, having been founded back in 1914.

With some 80 kilometres worth of hiking paths and nature trails that thread through the area, there is something for all members of the family and fitness levels.

Be sure to keep a look out for wildlife – ibexes, chamois, marmots, northern hares, lizards and countless birds can be observed throughout the park.