Cruising under the spell of the Rhine River 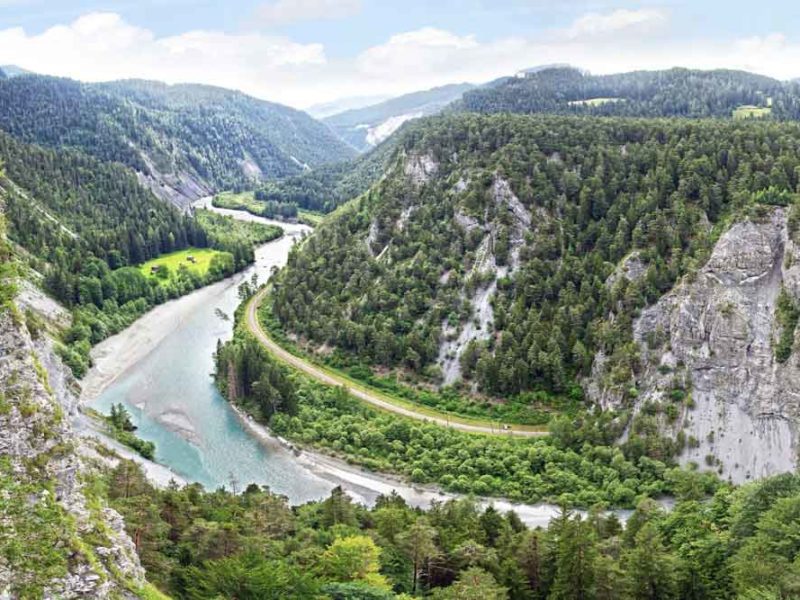 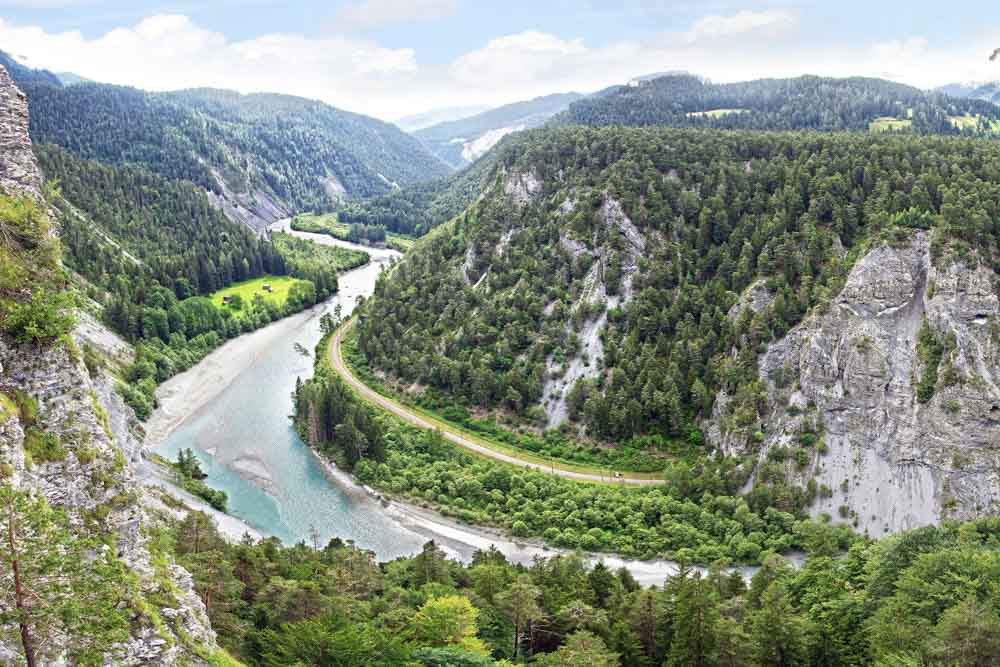 The mighty river Rhine originates from mountain brooks in the Swiss Alps, serves as a border between Germany and France, splits up into tributaries in the Netherlands and empties into the North Sea.

Europe’s most famous river, The Rhine, is as captivating as the fairytales set along its banks. Words, by Megan Arkinstall.

More than 200 years ago, German author Clemens Brentano told the story of Lore Lay, who was betrayed by her sweetheart and spent her days thereafter bewitching men.

As punishment she was banished to a nunnery; on her way there she asked the guards’ permission to climb a rock to view the enchanting Rhine for the last time. It is here where she jumped to her death.

Poet Heinrich Heine adapted the story in his famous poem Die Lorelei, which declares that Lorelei’s hypnotic beauty and singing voice casts a spell over sailors passing the rock, causing them to wreck their ships and meet their demise.

The Rhine is abound in myths and legends; folklore that has been passed on for generations, including the story of Lorelei.

While cruising the river onboard one of Avalon Waterways’ newest ships, the elegant Imagery II, I find it hard not to use words such as ‘magical’ and ‘fairytale’ to describe our journey.

But there’s nothing fictional about the beauty and charm of this river. Its medieval cities and towns are incredibly well preserved; its scenery captivating; and its stories legendary.

During the Middle Ages, the Rhine was a central location for trade and transport; many of the 40 or so castles in the Middle Rhine Valley were built by the rich and powerful who lived in a world of excess and greed, and would charge tolls to anyone who tried to pass by.

Marksburg Castle, one of our shore stops, was built in the 12th century to protect the German town of Braubach and is the only authentic medieval fortress of the Middle Rhine.

Originally named Burg Braubach, ‘Marksburg’ comes from St Mark who is said to have saved the Lord of the castle’s daughter on the eve of her marriage to Rochus von Andechs, who, unbeknownst to the bride, belonged to the Prince of Darkness.

St Mark appeared before a monk praying in the castle’s chapel and presented him with a cross to banish Rochus, who was subsequently swallowed up by the earth.

Marksburg is the only castle on the Rhine never to have been destroyed during these grim times, which comes as no surprise when we explore its timeworn walls.

Its secret passageways were built for quick access to the cannon area (they also bend to the left because attackers would normally draw from their right and thus, if entering via the passageway, it would hinder their attack); the tiny beds were designed to sleep in an upright position, in case of a nocturnal attack; and the toilet door locks from the outside so that intruders couldn’t climb up the external waste chute and break in.

Further up the river in Rüdesheim am Rhein, we have pulled up our e-bikes (an incredible invention – the vineyards of Rüdesheim are somewhat precipitous) at the ruins of Ehrenfels Castle, which operated as a river toll station in the 13th century.

Sipping on the Rheingau wine region’s most famous drop, riesling, we learn that the castle was extensively damaged during the Thirty Years’ War (1618–48) and all but destroyed in 1689 during the Siege of Mainz.

Across the river on a small island is the Mouse Tower, built between the 13th and 14th centuries as a watch tower for the castle.

During a famine, it is said that the Archbishop of Mainz promised begging peasants a feast in a nearby barn. Instead, he set the barn alight and is said to have cried out “Hear the mice squeak!” as they perished. But karma showed up to this cruel ruler in the form of an army of mice who ate him alive in the tower!

Back in town, and safe from mice, we wander down Drosselgasse, described as ‘the merriest street in the world’.

Bustling with wine taverns, open-air beer gardens, and shops selling ornamental beer mugs and cuckoo clocks, we are enchanted by the live music coming from Quetschkommode (German for ‘accordion’) and settle in for a glass of Hefeweizen, a German wheat beer.

With a love of all things Noël, Rüdesheim’s Christmas store tugs at my festive heart strings: it is stocked with the most beautiful traditional German ornaments. But further along the river is the ‘Capital of Christmas’, Strasbourg, home to the oldest Christkindlesmarkt in Europe, established in 1570.

Though if you’re not here during the festive season or you’re more the ‘Bah! Humbug!’ type, Strasbourg – also the capital of France’s Alsace region – is more than just a winter wonderland of markets selling Glühwein, glass baubles and roasted chestnuts.

Arriving by bateau-mouche (sightseeing boat) on the River Ill, we are greeted by Petite France’s pastel-coloured, half-timbered houses heaving together on the banks.

During the Middle Ages, Petite France was the Tanners’ Quarters on the River Ill; its delightful laneways, canals and historic buildings form part of the UNESCO World Heritage Site of the Grande Île, Strasbourg’s central island.

Interestingly, the name Petite France isn’t a patriotic nod – it comes from the ‘hospice of the syphilitic’ that was built here in the late 15th century (syphilis was then known by Germans as the ‘French Disease’).

Shortly after we disembark, we’re standing out the front of the Gothic Strasbourg Cathedral with our heads craned upward, mouths agape. Commissioned in 1015 by the Bishop of Strasbourg, it took three centuries to build.

It was the tallest building in the world for more than two centuries and its spire, which extends 142 metres into the sky, is Europe’s tallest medieval structure.

Inside it’s just as captivating with a soaring nave, more than 4600 panels of stained glass, and an astronomical clock that was first built in the 14th century.

The current clock is the third incarnation; according to legend, the creator of the first clock had his eyes gouged out so he would never reproduce something of such beauty, though similar stories are told for other famous European clocks.

Back outside, we lose ourselves in the twisting cobbled laneways and canals, lined with a hodgepodge of charming buildings, with shuttered windows and flowerboxes.

We stop in at a winstub (Alsatian wine bar) and find a spot shoulder to shoulder with other merrymakers. With a glass of pinot blanc we ‘prost’ each other – though Strasbourg is French, the local language is German.

And that’s the beauty of cruising the Rhine: we’re walking a tightrope between Germany and France, each day slipping in and out of different languages, cuisines, customs and unique stories.

One day we’re eating freshly baked pretzels and buying tins of gingerbread in Colmar, France, a breathtaking town that bears the moniker ‘Little Venice’ and is located at the corner of Germany, France and Switzerland; the next we’re heading into the Black Forest to Breisach, a German town almost completely flattened during World War II and rebuilt in its original style.

Here we cycle through its farmland peppered with tulips and white daisies, passing a lady pushing a cart of garlic and herds of sheep munching on grass.

Eschewing soulless highways and aerial patchworks from 30,000 feet, we delight in watching the Rhine pass us by like a rolling projector while on board the Imagery II, whether we’re sitting on the top deck soaking up the sun, or reclining on our bed that faces the ever-evolving view.

Luckily, we pass the statue of Lorelei safely. She may not have entranced us, but the river that she watches over certainly has – the legendary Rhine, a river that has us believing in fairytales after all.

Avalon Waterways’ Romantic Rhine follows a similar itinerary between Amsterdam and Basel (one hour from Zurich).

Cathay Pacific has more than 70 flights a week from Australia to Hong Kong, and daily flights from Hong Kong to Zurich and Amsterdam, from $1479.

The seven-night Romantic Rhine cruise on Imagery II starts from $3714 per person, twin-share.