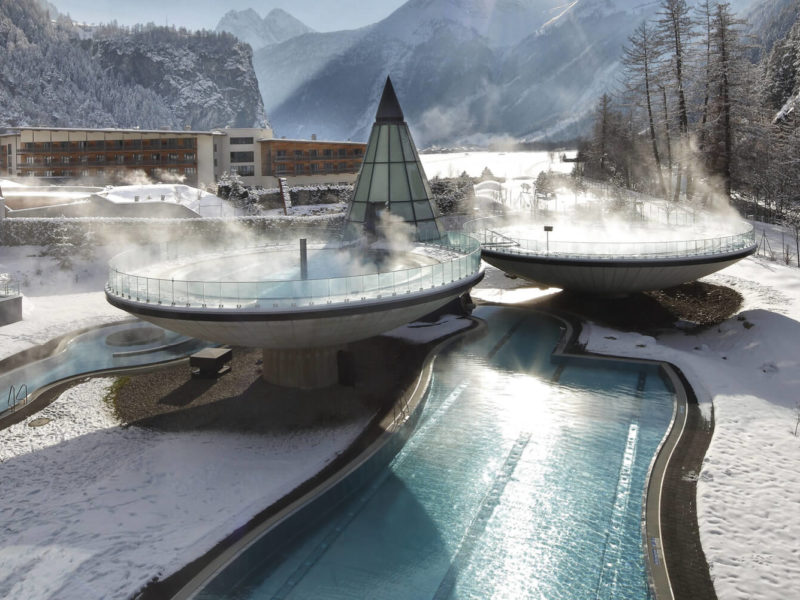 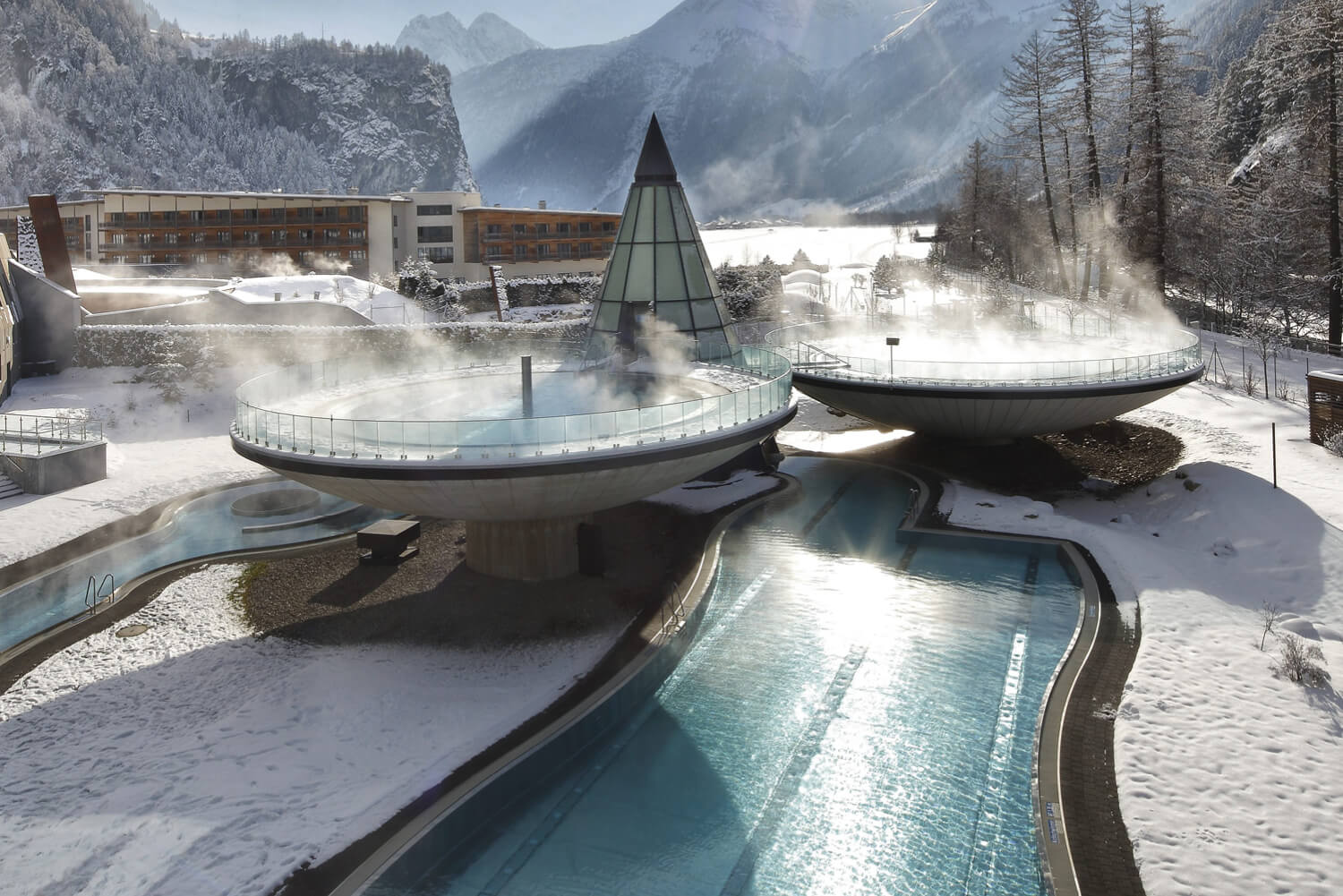 The Aqua Dome, a thermal spa right amidst the majestic mountains of the Ötztal Valley, is perfect for relaxing after an adventurous day on the ski slopes of Sölden.(c) Aqua Dome

If you didn’t consider Austria as your next ski holiday destination before, you will now…

When it comes to all things alpine, Austria offers a virtual chocolate box of choices: from quiet moments soaking up the spectacular scenery to thrilling, thigh-burning runs; from rowdy apres-ski singalongs, to family-friendly villages and high culture concerts. Arlberg and Sölden are two of the country’s most spectacular alpine destinations.

***In partnership with the Austrian National Tourist Office***

The Arlberg region is a mecca for snow enthusiasts, melding serious ski culture (it’s regarded as the ‘cradle of alpine skiing’) with serious party credentials (it’s also known as the birthplace of apres-ski). Comprising five charming villages in the south-western corner of the country, Arlberg includes St Anton, which oozes cosmopolitan flair; Lech, which draws high society to its high-class hotels and restaurants; and the cosy, family-friendly village of Stuben.

Austria’s largest interconnected ski resort (the fifth-largest in the world), Arlberg is an enormous, powdery playground: more than 300 kilometres of marked ski runs; 200 kilometres of free-ride and deep powder slopes; and the new ‘Run of Fame’, a breathtaking round-trip of the entire region. Did we mention you’ll also find Austria’s only heli-skiing on offer here, at Lech? Strap on those boots!

With more than 100 restaurants (many award-winning) and bars to choose from, Arlberg offers plenty of temptations to work off on the slopes. How does a gourmet seafood dinner 2000 metres above sea level sound? Take the gondola to Verwallstube, where candlelight dances off glasses of fine wine and the mountain air elevates your experience to the next level. Those wanting to pay homage to the not-so-gentle art of apres-ski should hit Krazy Kanguruh and MooserWirt, where the adrenalin of the day’s skiing keeps revellers dancing into the night.

Here, ‘high culture’ doesn’t just refer to the altitude: you’ll find everything from arts to wellness spas to round out your visit. At the arlberg1800 resort, a state-of-the-art concert hall hosts classical and contemporary musical performances alongside a modern gallery. Head to arlberg-well for soothing massages, indoor and outdoor pools amidst rugged mountain scenery, and a range of saunas. There’s also a slew of non-skiing pursuits, from hiking to horse-drawn sleigh rides, throughout the region.

A lively calendar of events, from film festivals to traditional village celebrations, keeps things jumping. The most famous, the White Ring, is billed as the longest ski race in the world and sees up to 1000 participants assembling on the Rüfikopf before swooshing off to conquer 22 kilometres of pistes, with various ‘White Parties’ held in its honour.

How to get there: St. Anton Arlberg Travel and Lechzuers Travel Guide

Sölden manages to effortlessly bridge the gap between solid reliability and Hollywood glamour. Located in Austria’s upper Ötztal Valley and boasting three mountains more than 3000 metres high, the region guarantees snow from October through May, its pedigree further bolstered by hosting annual World Cup alpine skiing events. And, thanks to a certain Mr Bond (the 2015 film Spectre filmed some of its most thrilling scenes here), Sölden has found a whole new generation of fans.

With more than 140 kilometres of groomed slopes, direct access to two glaciers via state-of-the-art lift networks and, of course, the ‘BIG3’ summits, the possibilities are endless. Those looking for a challenge should head to Schwarze Schneide – the region’s longest ski trail, clocking in at around 15 kilometres.

Don’t miss Spectre star iceQ, with its huge glass windows and bold lines creating a striking jewel-box setting from which to take in the magnificent mountaintop views while enjoying fantastic food and wine. Throw in Sölden’s lively apres-ski venues, from mountain huts to bars and lounges, and you’ve got a true taste of Austrian alpine culture.

Get acquainted with the stunning forests, rivers and icy plains of the region via myriad cross-country ski and hiking trails, before blissfully soaking sore muscles in the thermal spa at the Aqua Dome, surrounded by the soaring mountains. Families will get a kick out of various toboggan runs, or the sleek new Motorcycle Museum at Top Mountain Crosspoint.

Hannibal, the enormous, 500-person theatrical spectacular, brings to a snow-driven stage the real-life crossing of the Alps by the famous Carthaginian general Hannibal and his vast army. The production makes full use of the open-air theatre, featuring fireworks, songs, snowmobiles, giant frozen elephants and skiing demonstrations. The next staging is scheduled for April 2019. Don’t miss other highlights such as the Electric Mountain Festival, a two-day dance-fest, or the Alpine Ski World Cup opening in October.

Feldkirchen in Kärnten, Austria is a lush, green town with lots of history, check out the castle presiding over the town - number 83 on our list of...

Situated in the heart of Europe, Austria has seen many a traveller lured by the country's stunning architecture, breathtaking nature (especially durin...