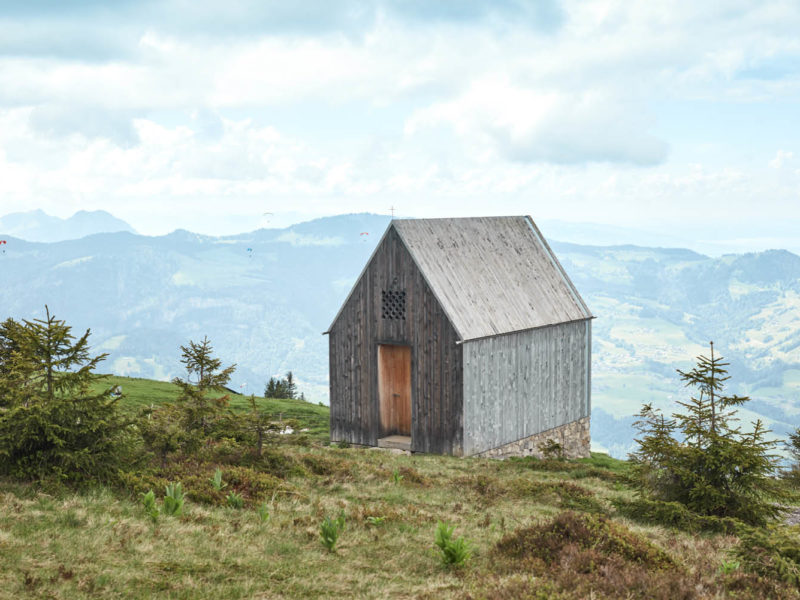 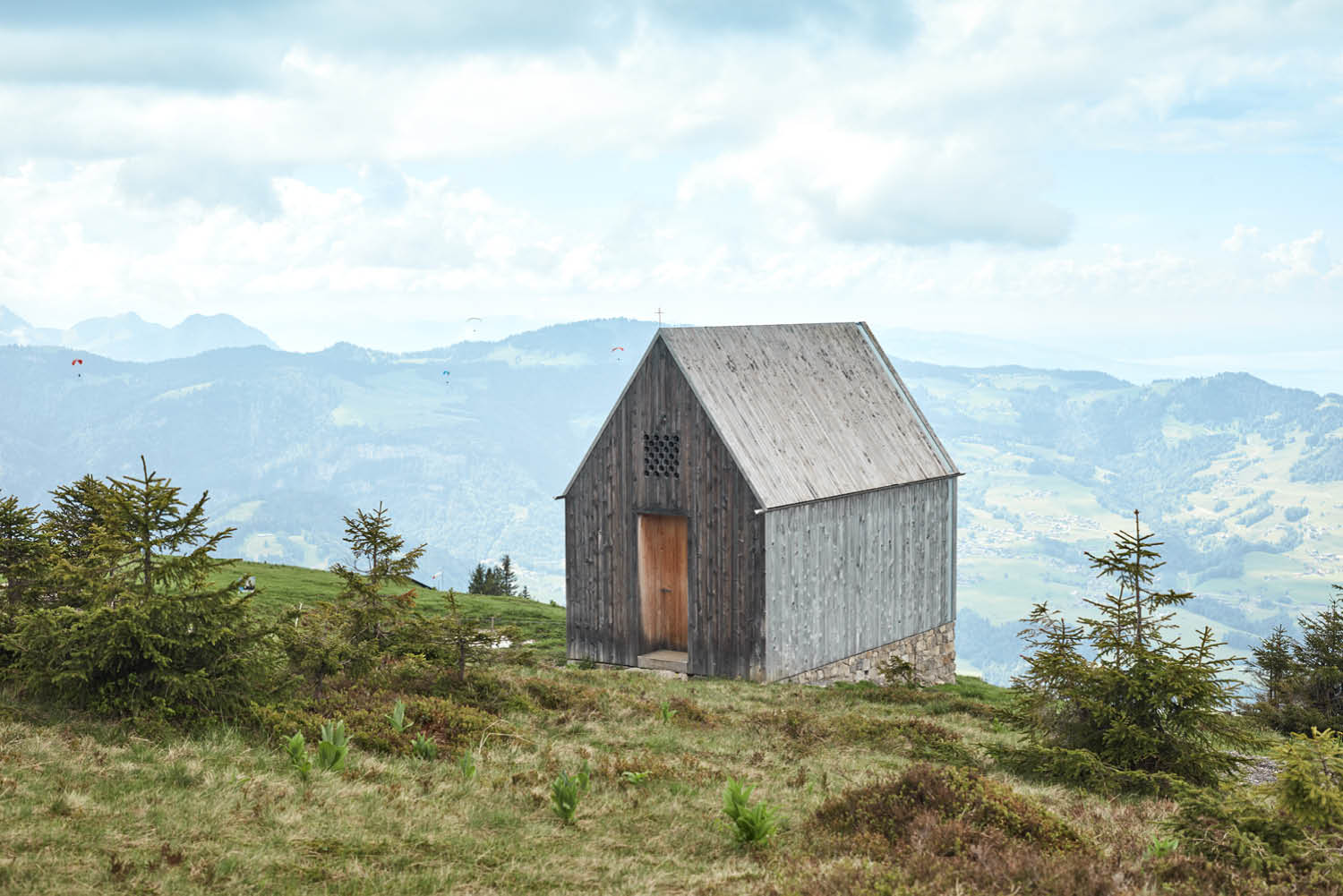 Bus stops, moor houses, and tiny little chapels make for an architectural ‘I spy’ in Austria’s Vorarlberg – a lesser-known region that celebrate craftsmanship in all forms, writes Celeste Mitchell.

The sun is still rousing from its slumber as I walk into Krumbach moor, the forest blanketed in silvery mist. While I’m here in appreciation of nature, in the distance, a steeply-pitched shingled roof steals the scene.

Cutting a modernist figure in this storybook landscape, the Salgenreute Chapel’s clean lines and honey hue hints at its youthfulness – being a new incarnation of a chapel that stood for 200 years. With time, its silver fir cladding will deepen and darken with the effects of the sun, just like the modern farmhouses in this area.

Inside, straight-backed pews match the blond timber walls and floor, facing out to the forest through a dramatic pane of glass, seemingly as much in worship of Mother Nature herself. This symbiosis of nature and design is what the Bregenzerwald region in the state of Vorarlberg in western Austria does best. Well known for their architecture and crafts for decades within Europe, word is only now getting out further afield.

Within the cluster of 22 villages, time-honoured craftsmanship collides with innovative thinking, providing a design playground for visitors to explore.

To the people of Bregenzerwald, inspiration is found in the beauty of nature and everything is done with purpose and pride. So when it came to updating something as mundane as the bus stops in the village of Krumbach, it was another opportunity to think outside the box.

In 2014, seven architects were invited to holiday in Bregenzerwald to find inspiration and design – freely and without a brief – a bus stop each, to be built by local craftspeople. The result jars preconceptions of how built objects interact with the land around them.

Here, Japanese architect, Sou Fujimoto’s white poles reach for the sky with steps leading up to the heavens. Over there, a jagged Jenga-block ensemble dreamt up by Antón García-Abril and Débora Mesa provides shelter while drawing inspiration from the hewn oak planks stacked to dry in timber workshops throughout the villages, their raw scent lingering in the air.

Beyond looking good, an environmental ethos underpins the project, encouraging exploration via bus and foot. Visitors to the region receive a pass which provides free public transport when staying three nights or more.

The chapel that cheese built

After riding the cable car up to the peak of Alpe Niedere from Andelsbuch, I stumble upon another unexpected architectural delight, teetering on the edge of the mountain with the patchwork of villages spread out beyond its spruce cladding.

The tiny chapel belongs to the owners of the nearby mountain inn – Alpine cheesemakers – who held a design competition before awarding the project to local architects Andreas Cukrowicz and Anton Nachbaur-Sturm.

Though the duo had also designed the likes of the Vorarlberg Museum in nearby Bregenz – its striking white concrete façade dotted with ‘flowers’, which are actually the bottoms of PET bottles – Cukrowicz and Nachbaur-Sturm were more than happy with their payment. Three wheels of the family’s prized cheese, to be exact.

With only 30,000 residents – and as many cows – everything in the Bregenzerwald is done on a small scale.

“We can’t offer the quantity, we can only offer the quality,” guide Helda Radler tells me as we sip coffee around the communal table inside Werkraum Bregenzerwald in Andelsbuch. The conversations floating around us contemplate and appreciate the 90 local craftspeople who created a foundation to build this striking museum, school and meeting place.

Such quality is achieved through upholding traditional building methods – once forgotten, now trendy again – such as felling timber based on the moon cycle, and only in the winter.

“In the past you would be embarrassed to ask about where the wood came from and if it was cut to the moon cycle but now people want to know where they come from,” Radler says.

It’s this quest for quality, and what Werkraum Bregenzerwald represents of the local design industry as a whole, that caught the eye of UNESCO. In December 2016, the maker’s space was added to its register of Best Safeguarding Practices for the Preservation of the Intangible Cultural Heritage.

And whether its craftspeople are paid in cheese or cold hard cash, it seems they couldn’t be happier working with what nature has provided in this contemporary corner of Austria.

Getting there: SWISS International Airlines flies to Zurich via Singapore or Hong Kong with partners Singapore Airlines and Qantas. The Bregenzerwald region is a 1.5-hour drive from Zurich Airport. swissair.com

Staying there: Stay at the Romantik Hotel das Schiff in Hittisau to appreciate the marriage of 1840s farmhouse and modernist extension, with the renovations made by local craftspeople and overseen by the owners, the fifth-generation Metzler family.

Playing there: The 12 ‘Umgang Bregenzerwald’ self-guided village walks include information and maps for your own architectural and cultural ‘I spy’ throughout Bregenzerwald. Independent guide, Helga Rädler, is also available for private customised architecture tours.

More information: Guided walks through Krumbach Moor are available every Thursday between June and September or private tours can be arranged. 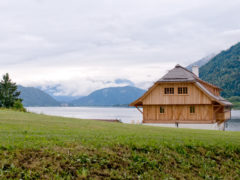 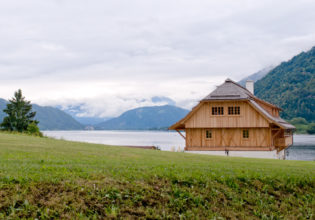 Feldkirchen in Kärnten, Austria is a lush, green town with lots of history, check out the castle presiding over the town - number 83 on our list of...