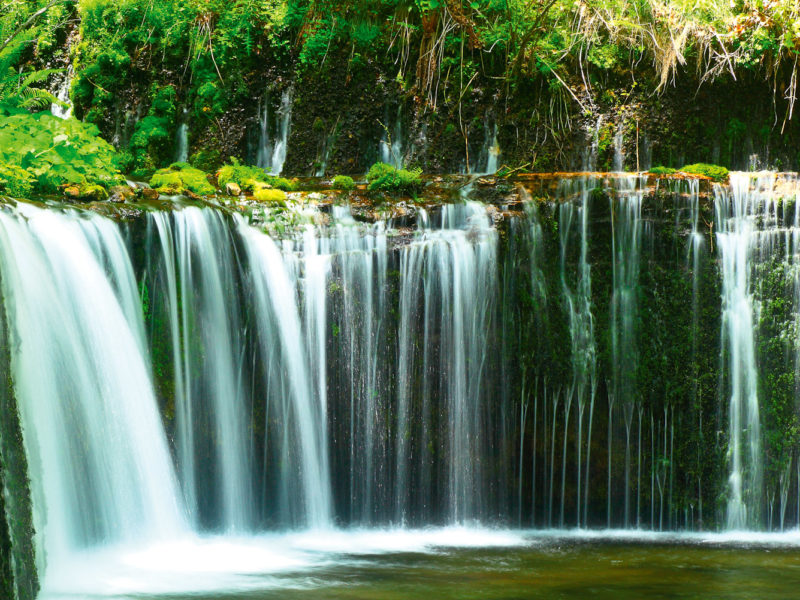 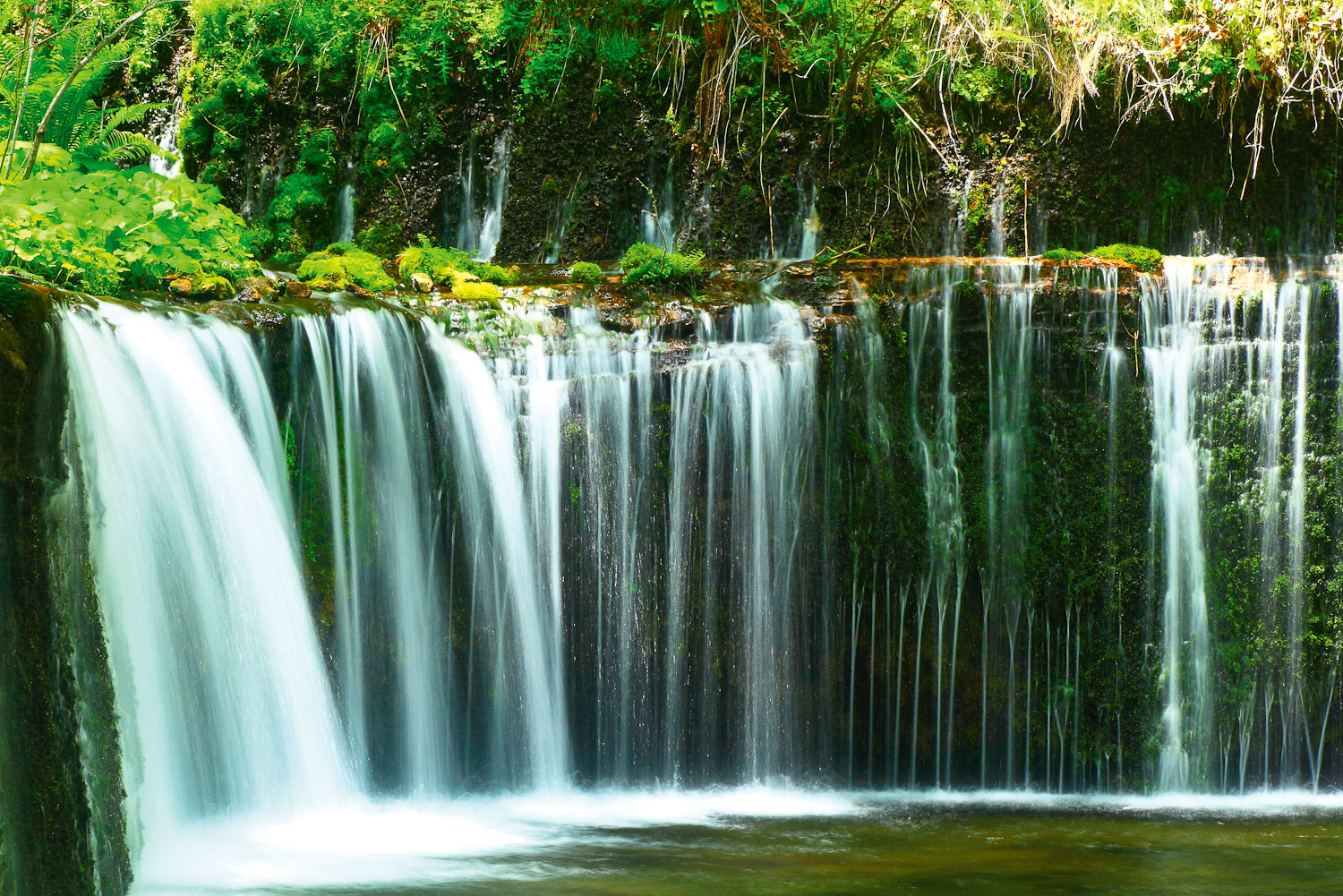 Shiraito Falls in the Shizuoka prefecture outside of Tokyo city.

According to locals, some of the Japanese capital’s best treats can be found beyond the city limits. Here’s what you can discover just two hours out of the city centre.

The suburbs of Tokyo roll by our van window as my perfectly polite Japanese guide Yumi offers a telling observation about Australian travellers: “They don’t venture out of the city. And that is a shame because there is so much to see within two hours of Tokyo.”

So that is the challenge Yumi has been set. 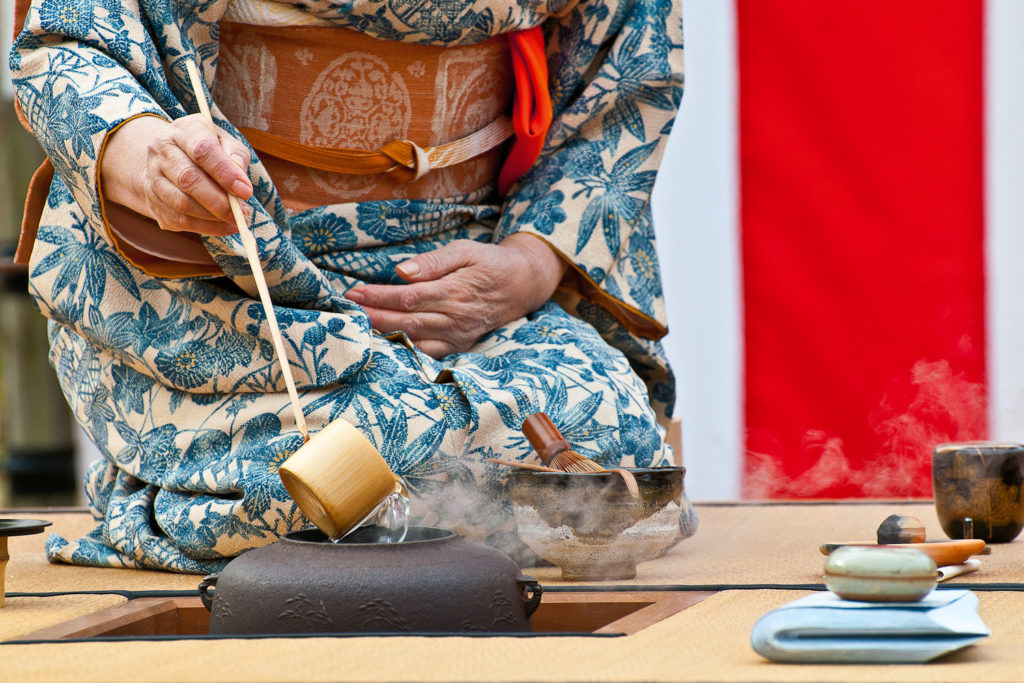 No journey to rural Japan is complete without a tea ceremony.

On a series of day trips out of Tokyo through the Yamanashi, Shizuoka and Kanagawa prefectures to the south-west of the city, my guide has to show off five of the city’s best day trips, all within an easy two-hour journey. 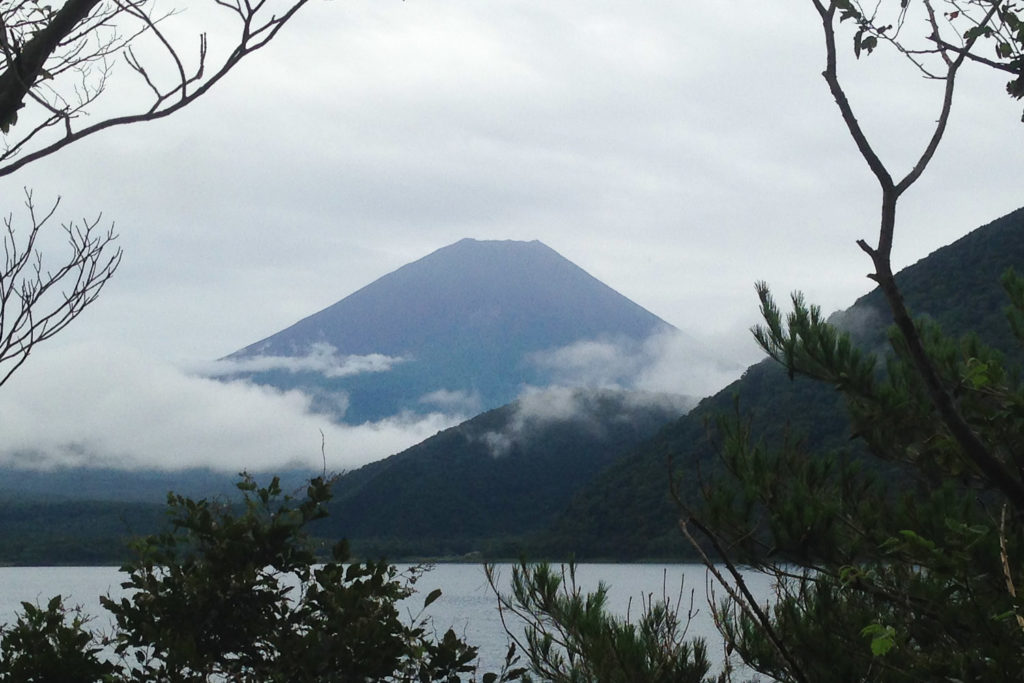 You don’t have to climb it; the conical form of Mt Fuji can be savoured from the shore of Lake Motosu-ko.

With Mt Fuji in sight not long after we begin along the freeway, it becomes obvious that this most iconic of Japanese symbols will take a front-and-centre role in our mission.

Whether from near or far, the sight of Mt Fuji (Fujisan by its Japanese name) lives up to all expectations. It is grand, imposing and almost perfectly symmetrical in its conical shape, making a dramatic statement on the landscape from every vantage point. All of which explains why this volcanic mountain has been a sacred object of worship and a source of artistic inspiration for centuries.

As the highest mountain in Japan, the 3776-metre natural monument towers above all; on a clear day it can be seen from Tokyo 100 kilometres away. Up close, Mt Fuji continues to put on a great show, with differing light throughout the day and the colours of the seasons changing the mountain’s many moods.

It is divided into 10 stations with paved roads going as far as the fifth at 2000 metres. Most people make the ascent between July and August, which can take up to 10 hours one-way and demands you are well prepared. The off-season runs from October to mid-June, but due to the risk of avalanches, areas of the mountain are closed. At that time, admiring it from picture-perfect sites like the nearby Lake Motosu-ko will do just fine. 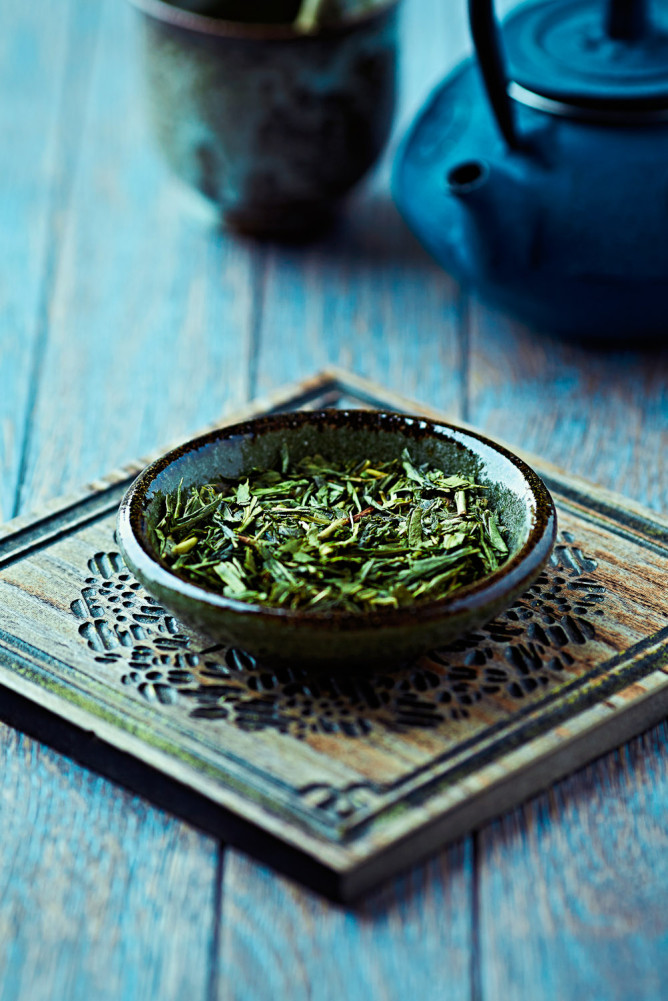 Make sure you try some green tea picked from the base of Mt Fuji.

The spring water streams that flow down Mt Fuji have to end up somewhere, and what doesn’t flow into Lake Motosu-ko heads to the Shiraito Falls. Here the water appears to seep out of crevices in 20-metre-high cliffs, creating a dramatic 200-metre-wide cascade.

They’re not the biggest falls in Japan, or even the grandest, but Shiraito Falls are definitely some of the most intriguing for the way their source appears to weep out of the rocks in thin streams. It’s easy to see why the waterfalls are one of the most sacred places for worshippers of Mt Fuji and were added to the World Heritage Site list two years ago.

For something a little mightier, the Otodome Falls are a short walk along the trail. Otodome is known as the ‘sound-stopping waterfall’ as the noise of the water crashing into the pool below is so loud that little else can be heard. The name relates to an 800-year-old tale of a revenge plot hatched next to the falls so that no one else could overhear the sinister plans. 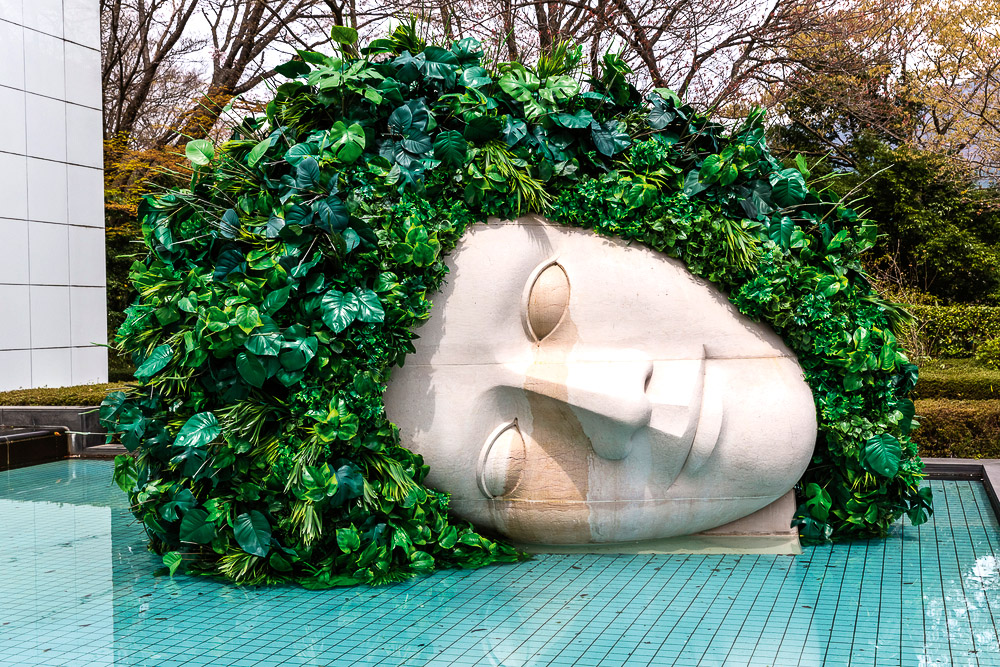 Take in bold sculptural works at the Hakone Open-Air Museum.

Hakone Open-air Museum is surely the art museum for people who find such places hard going.

It is outdoors, set in 70,000 square metres of rolling gardens, and contains 120 magnificent Japanese and western sculptures, including works by Bourdelle, Rodin and Moore. The pieces are big and imposing, and yet appear at ease in their spacious setting, accompanied by views of the surrounding Hakone Mountains.

Abstract is the order of the day here and the result is a success. The cylindrical Symphonic Sculpture tower doesn’t look like much from the outside, but stepping within is like entering a kaleidoscope, its coloured images creating a mesmerising experience.

There is also a sense of irony to the place given that it is open-air but the grand prize is to be found indoors: the Picasso Collection, with over 300 paintings, drawings and sculptures.

To cap it all, the gallery offers a soothing foot bath sourced from local hot springs as its final act, helping you unwind after taking in its collection, and making it a true feast for all of the senses. 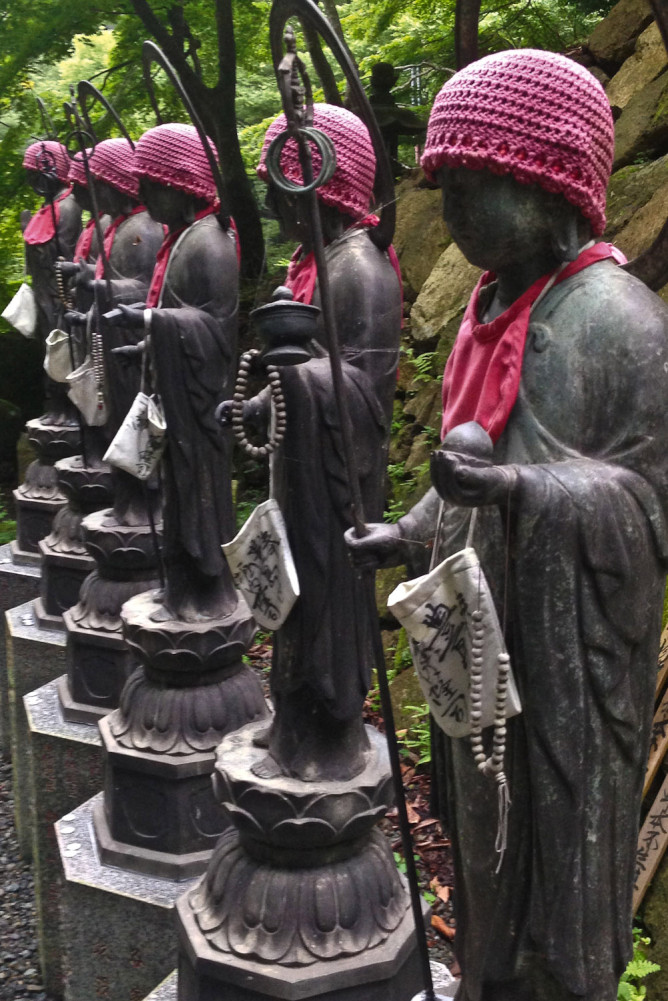 Jizo statues line the path on the way to the Afuri Jinga Shrine.

It’s a long way to the top to get to the Oyama Afuri Jinja Shrine – but the journey is half the fun of this magically serene place of worship, perched high in the clouds on the edge of a mountain.

First, there are 10 minutes’ of stairs to climb past rows of tiny houses and even tinier shops. Then there’s the Oyama Cable Car, a funicular that tackles the sheer climb up the mountainside, heading through the clouds. This is followed by paths through mountain woods to the temple sitting grandly at the peak. With mist swirling round it, the temple has an ethereal appearance.

‘Afuri’ means ‘rainfall’, which is why farmers have been tackling the path to the shrine for centuries in order to pray for rain.

Down a side trail is another gem, the small Chatodera Temple, with its collection of stone Buddhas lit by candlelight and Jizo statues lining the trail for safe-keeping.

Once back at the bottom of the hill, stop for a bite at the Togakubou tofu restaurant, which has been in the same family for 18 generations! 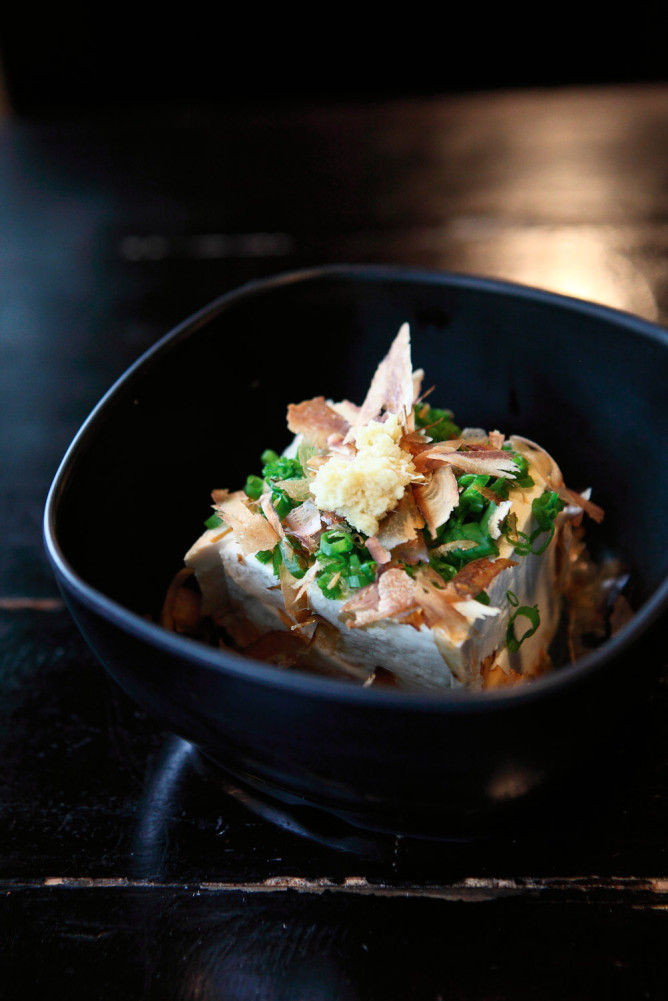 Rest weary legs at the Togakubou tofu restaurant, once having made it up to the Afuri Jinja Shrine. 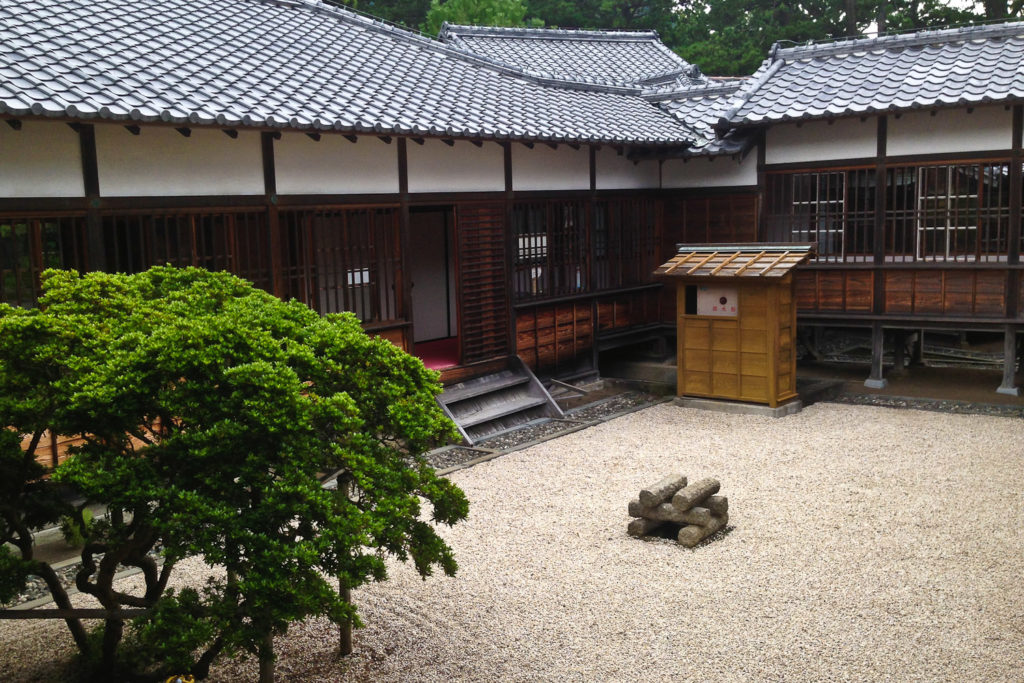 You can find out how the Imperial family used to live at Numazu Goyotei Memorial Park.

The former summer villa of the emperor and the imperial family offers a serene look into how the Japanese royals lived for three generations from the 1890s.

Situated on the shores of the Kano River, the 15-hectare park is complete with a small forest of pine trees, as well as plum and peach trees that bloom annually.

The villa shows off the simple approach of Shoji architecture, made entirely out of wood, glass and washi paper; the charm of this elegant building is its simplicity. The villa remained the royal summer residence until 1969 when it was opened to the public as a museum and riverside park.

While Numazu Goyotei offers a glimpse into royal life, only half the original building remains. During bombing raids by the Allies in the later days of the Second World War, the villa was attacked and much of it destroyed. The imperial family was not in attendance at the time, and whether the bombing was part of a strategic offence to kill the family remains a mystery.

Ultimately Yumi delivered on her promise. The journey out of the city was easy, the destinations were superb and, most importantly for travellers with a time limit, more time was spent wondering at the attractions than moving between them.

In fact, they were all so wonderful that at no time did I wish that I was back in the fun, colour and hustle of Tokyo, which is the mark of a great trip no matter how long it takes you to get there.

Many operators have day trip packages to Mt Fuji and its surroundings, including JTB Luxury Travel’s private one-day tour taking in Mt Fuji and Hakone. All destinations visited above are also serviced by an efficient rail and bus network.

Japan Airlines has daily direct flights from Sydney and Melbourne to Tokyo, with connections from other Australian cities. 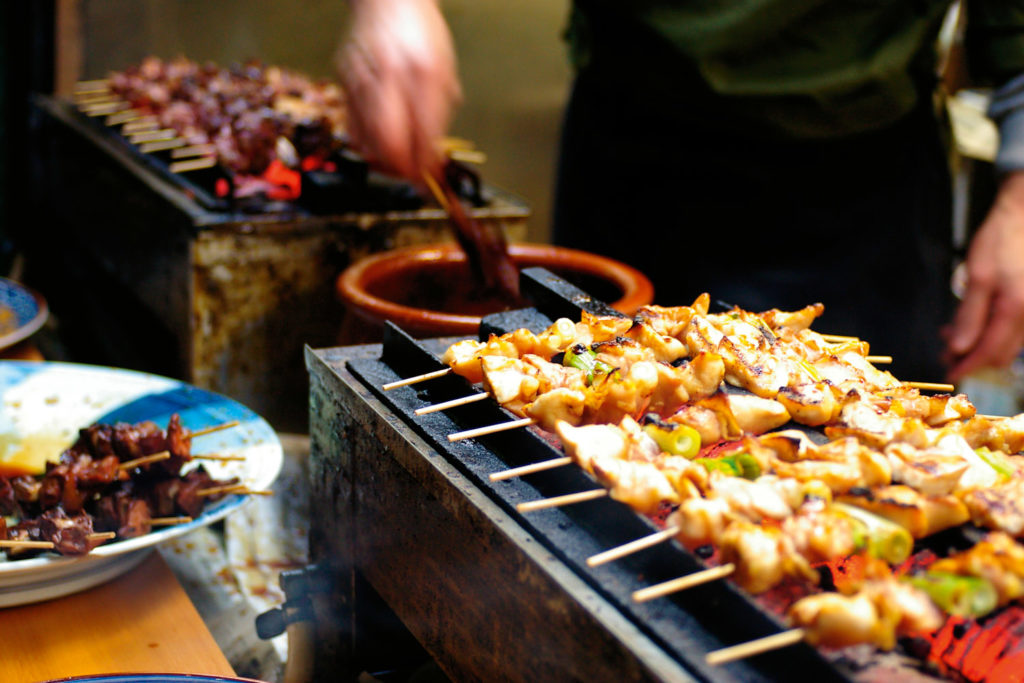 You’re never far from delicious street food when you venture beyond Tokyo.

Planning a trip to Japan? Read our ultimate travel guide to Japan for everything you need to know about where to stay, eat, what to see and do. 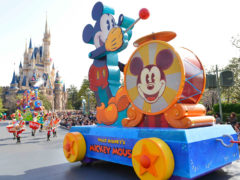 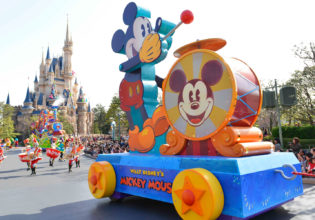 Jen Pinkerton shows grown-ups with kids in tow, adult fans of Mickey, and simply the curious among us, how to get the most out of Tokyo Disneyland, a...