A beginner’s guide to the Louvre, Abu Dhabi 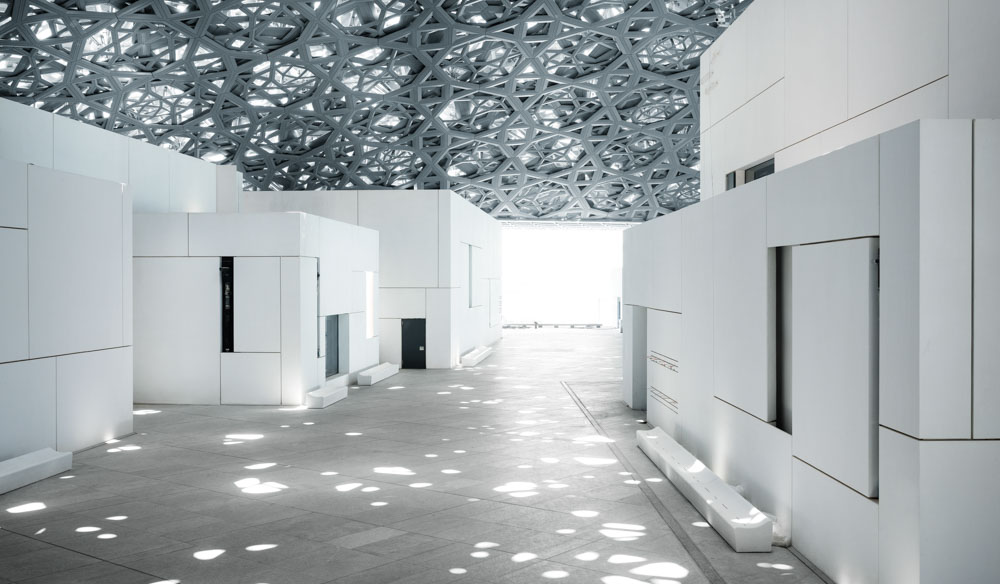 With the recent opening of the new Louvre Abu Dhabi, the United Arab Emirates capital has taken the first bold step on a cultural journey that will see it become an art hot spot to rival the likes of New York and Paris, writes Leigh-Ann Pow.

The life of the Louvre Abu Dhabi began back in 2007 when the United Arab Emirates and France decided to work together to develop a cultural institution rooted in universal human values, fostering respect, curiosity, learning and self-reflection. A lofty vision indeed, but on a more practical level the museum is also the first step on the UAE’s journey of cultural progression and openness that will see it become a capital of culture in the decades to come.

Before you busy yourself with what’s inside, due deference needs to be paid to the stunning structure itself. Award-winning French architect Jean Nouvel has created a structure that is at once boldly modern and totally reflective of the traditional architecture and traditions of the United Arab Emirates.

“A welcoming world serenely combining light and shadow, reflection and calm,” is how Nouvel has described the design. “It wishes to belong to a country, to its history, to its geography without becoming a flat translation. It also aims to emphasise the fascination generated by rare encounters.”

The centrepiece of his vision is the signature dome that anchors the entire ‘museum city’ that has been created, at the point where the desert sand meets the clear, cool waters of the sea. Inspired by the cupola, a constant touchstone in Arabic architecture, Nouvel’s design is an intricate metal web of 7850 stars, rendered in various sizes and at different angles over eight different layers.

When the sun passes through it, a mesmerising rain of light floods the interior, reflecting the patterns that are seen everywhere in Abu Dhabi as the sun beats down on the abundant date palms, casting intricate shadows. Conversely, at night the lights shining from within make the entire structure sparkle as you move past it, like the gem that it arguably is.

The Louvre Abu Dhabi has been conceived as its own micro city, where visitors can wander through and explore 55 detached buildings that appear to float in the water, much like the islands that make up Abu Dhabi itself. A total of 23 of the buildings are dedicated to galleries, which tell the story of humanity in 12 compelling chapters, from The First Villages to Universal Religions to A New Art of Living, with works ranging from ancient artefacts to contemporary artworks.

The aim throughout is to focus on shared themes and ideas that reveal common connections throughout humanity, to remind us that the things we have in common far outweigh the things that make us different. There are also lots of interior spaces for contemplation, a café, a restaurant, and outdoor walks, art and rest areas to explore.

For the little art lovers

With the aim of inspiring young minds, the Children’s Museum at the Louvre Abu Dhabi goes way beyond colouring-in sheets and pint-sized furniture. Spread across two floors, the museum within a museum will host family-focused exhibitions and interactive workshops (in both Arabic and English) that are designed to educate as well as enchant. Aimed squarely at six to 12 year olds, the space itself and the programs featured will nurture the curiosity and creativity of youngsters, and the young at heart.

The numbers behind the creativity are staggering: the dome weighs 7500 tonnes, the same as the Eiffel Tower in Paris, and measures 180 metres in diameter; of the eight different layers on the dome, the four outer layers are clad in stainless steel, the inner layers in aluminium; the largest star in the metal tapestry of the dome is 13 metres in diameter and weighs 1.3 tonnes; just four piers support the dome, hidden within the museum building to enhance the feeling that it is floating above the museum micro city.

Given that the stunning Louvre Abu Dhabi is the first in a series of buildings and artistic concepts on the agenda, there’s definitely more where that came from including a Guggenheim Museum designed by Canadian architect Frank Gehry, the Zayed National Museum by Sir Norman Foster’s Foster + Partners practice, and the futuristic Abu Dhabi Performing Arts Centre by Zaha Hadid Architects, all to be located near the Louvre Abu Dhabi in the Saadiyat Cultural District.

But wait, there’s more… 6 things you need to know about Louvre

Save up to 20% off your Mauritius escape

Save up to 20% off your Mauritius escape

You've booked your ticket, now what?  We'll show you 8 things you absolutely can not miss in Abu Dhabi! (more…)...