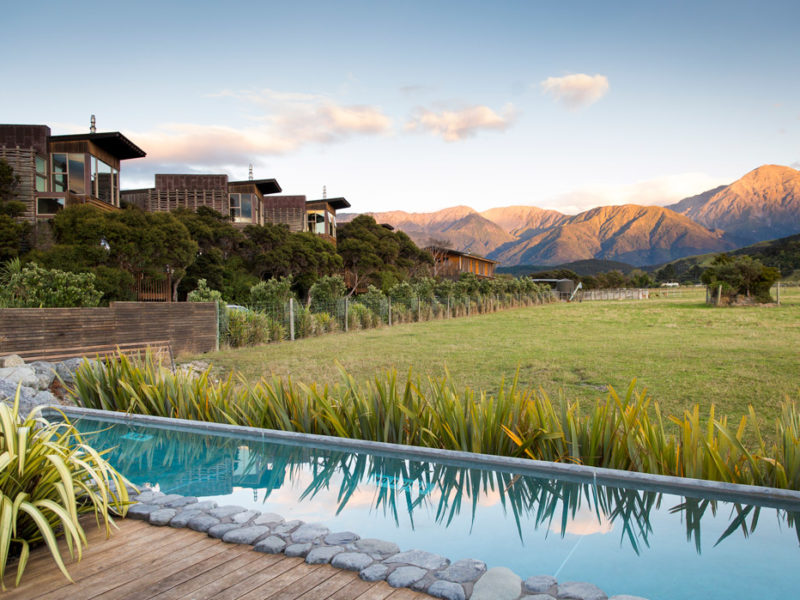 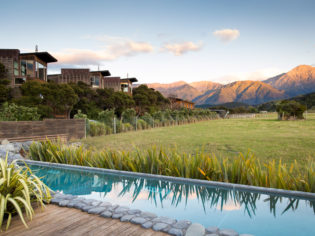 Hapuku Lodge + Tree Houses in Kaikoura on the east coast of the South Island.

Here’s where to sleep in New Zealand’s South Island for a total immersion in its wilderness and culture.

Whether it’s a remote luxury lodge, a waterside retreat, a treehouse or even a castle, accommodation in New Zealand’s South Island is all about sharing the landscapes and cultural heritage that makes this part of the world unique. Here’s our pick.

Stay in boutique comfort in one of Queenstown’s original residences: Hulbert House, built in 1888.

Today, this beautifully restored villa accommodates guests across six uniquely designed rooms that are decorated with an eclectic mash-up of English wallpaper, patterned textiles and rich colours that evoke both period elegance and a modern sense of playfulness.

Each boasts a view overlooking Lake Wakatipu, The Remarkables or the Skyline Hill and is named after a prominent character in the homestead’s history. Located close to the centre of town, it’s a serene place to retreat to after active days spent out and about in this adventure capital.

Alternatively, seek out The Spire Hotel. Smack-bang in the centre of Queenstown, this luxe hideaway is named after a nearby church steeple.

Perched on the edge of Lake Wakatipu, a 10-minute drive from Queenstown, Matakauri Lodge is a tranquil alpine retreat that offers spectacular mountain views every which way you look.

Scenic views meet you at all angles from the dining room of Matakauri Lodge.The sister lodge to Kauri Cliffs and The Farm at Cape Kidnappers in the North Island (considered among New Zealand’s top lodges), it’s also part of the Luxury Lodges of New Zealand portfolio and frequently appears on world’s best lists.

Most of its 12 rooms and suites come complete with their own private terrace, open fireplace and oversized bath, and the four-bedroom Owner’s Cottage comes with its own infinity-edge hot tub.

The private living and dining areas of the Matakauri Lodge Owners Cottage.

Most of its 12 rooms and suites come complete with their own private terrace, open fireplace and oversized bath, and the four-bedroom Owner’s Cottage comes with its own infinity-edge hot tub.

Views from the main bedroom of the Matakauri Lodge Owners Cottage.

Plus, there’s a heavenly spa nestled next to a pine forest, modern New Zealand cuisine to dine on, and a range of signature experiences to embrace: including a once-in-a-lifetime family excursion to Milford Sound, Queenstown heli skiing and a Southern Lakes art and wine tour.

The private spa on the deck of the Matakauri Lodge Owners Cottage.

Te Anau is the gateway town for exploring the glacier-carved wilderness of Fiordland National Park, and checking into The Cinema Suites means your adventure starts early.

Located above the Fiordland Cinema, this townhouse apartment was hand-built by local craftsmen and designed to bring the outside in: a striking feature wall depicts a forest and a plush green wool carpet mimics its mossy floor.

Inside the Cinema Suites Main Apartment.

Accents of velvet, fur and wood add further texture to the experience – as does a welcome bottle of local wine and an invitation to venture into the Fiordland via a stirring nature documentary, Ata Whenua – Shadowland, on show at the cinema downstairs.

Five-bedroom luxury lodge The Lindis only opened in January 2019 and has already scooped a major international architecture prize. It’s not hard to see why.

The Lindis disappears almost entirely into its surroundings.

Nestled almost imperceptibly on the floor of the Ahuriri Valley, the lodge is designed to blend into its rugged Southern Alps surrounds, 2.5 hours’ drive from Queenstown.

Inside one of the five bedrooms of the luxury lodge, The Lindis.

An elegant slatted roof echoes the contours of the earth below it and spotted gum wooden panelling and bluestone masonry is employed inside to reflect the tones of the landscape.

The Lindis has already scooped a major international architecture prize.

What’s on your plate at dinner also reflects what’s outside: with dishes including locally foraged porcini mushrooms and wild Fiordland venison.

The Lindis is located on the cusp of the Aoraki Mackenzie International Dark Sky Reserve – so you know the stargazing here is going to be amazing, too.

Although there’s a case to be made for camping out in the coastal paradise of Abel Tasman National Park, it’s hard to go past this intimate luxury lodge and wellness spa.

With Japanese inflections throughout, the retreat has just three guest suites, each with its own deck looking out to sea and flanked by fragrant gardens.

The retreat also has two private paths that lead to nearby beaches, one of which is home to its namesake landmark: the famous 120-million-year-old Split Apple Rock.

6. Bay of Many Coves, Marlborough Sounds

From the excellently named No Road Inn to quirky eco-lodge Lochmara, the pristine water world of Marlborough Sounds at the top of the South Island is peppered with stunning lodges accessible only by water, air or foot, providing the ultimate escape or welcome retreat for those walking the Queen Charlotte Track.

Perhaps the most show-stopping of all, and a Luxury Lodge of New Zealand, is five-star Bay of Many Coves.

Catch a water taxi for a stay at the five-star Bay of Many Coves.

Architecturally designed apartments are planted in bush that stretches down to the edge of the property’s secluded bay.

Guests fine dine on fresh local seafood and sip Marlborough region wines by the waterfront when the weather’s fine, and indoors by the fireplace in cooler months.

This contemporary country hotel is set on a deer breeding farm just north of eco-marine town Kaikoura on the east coast of the South Island.

Hapuku Lodge + Tree Houses in Kaikoura on the east coast of the South Island.

Alongside its light-filled lodge rooms and three-bedroom Olive House (named after the on-site olive grove), Hapuku offers the unique proposition of sleeping in a treehouse 10 metres high among the canopy of a native kanuka grove (a relative of manuka).

Inside the Tree House of Hapuka Lodge.

These sleek, timber-clad crashpads have cosy fireplaces, deep soaking tubs and big windows with views out to Kaikoura’s dramatic mountains and the Pacific Ocean.

A sustainable operation through and through, the lodge’s restaurant (helmed by a former Masterchef finalist) sources 85 per cent of its ingredients from its organic garden or locally, including crayfish – Kaikoura’s speciality.

Mountain views from the pool and spa at Hapuku Lodge + Tree Houses.

This charming accommodation is housed in a 1910 timber villa that has been restored and converted into boutique, sustainably minded accommodation.

It’s located on the edge of Christchurch’s city centre, across the street from the famous Cardboard Cathedral (which was built after the city’s original cathedral sustained serious damage in the February 2011 earthquake, and has become a powerful symbol of inspiration and innovation ever since).

There are eight upcycled and individually crafted rooms that cater to all budgets here at Eco Villa, paired with beautiful shared spaces and access to a guest kitchen, edible garden and private outdoor baths.

The owners, with their passion for environmentalism and the Christchurch rebuild, serve a homemade organic breakfast in the morning.

Move over, tiny houses. PurePods is where it’s at in New Zealand: an exercise in sustainable luxury and making the most of those jaw-dropping landscapes the South Island has in spades.

Here, six off-grid PurePods are hidden in remote (yet accessible) spots throughout the wilderness: two are 20 minutes inland from Kaikoura and four are within a 90-minute drive of Christchurch.

Solar-powered and kitted out with crisp linen, a good shower, a barbecue, books to leaf through and more, they provide the luxuries of glamping, but with one big point of difference that makes for an absolutely unforgettable stay.

Each PurePod is constructed of heavy-duty glass, which means you can see absolutely everything around you – from the stars above to the native plants underfoot – for a true immersion in the landscape.

It’s not all luxury lodges, quaint bed and breakfasts and eco pods here: you can also stay at a castle.

Situated on the picturesque Otago Peninsula within the Dunedin city limits, Larnach Castle was built in 1871 and has been lovingly restored by the Barker family, who bought it as a family home in 1967.

It’s a popular attraction, so opt to spend the night so that you can have the castle to yourself when the tours have finished for the day. There’s a range of accommodation on offer including budget options in the historic stables, 12 history-themed rooms within Larnach Lodge and a five-bedroom country house decked out in neo-classical style.

Guests are invited to join a three-course dinner party in the castle’s dining room each night.

20 hacks to help you reduce plastic on your travels

Single-use plastics are clogging our waterways and littering pristine landscapes. It's common knowledge that the ubiquitous presence of plastic in ou...

7 of the best travel podcasts for self isolation

One of the things that quarantining during COVID-19 has given us is time. Lots of it. Everyone is looking for meaningful ways to spend this extra quo...

15 ways to travel the world without leaving home

Travelling is on hold, but you can still bring a little bit of the world home to you. It’s time to enjoy the things we can about the countries we l...

As part of an ongoing campaign, World Animal Protection have identified the top 10 animal attractions to avoid. Let’s spread the word further. 1. R...