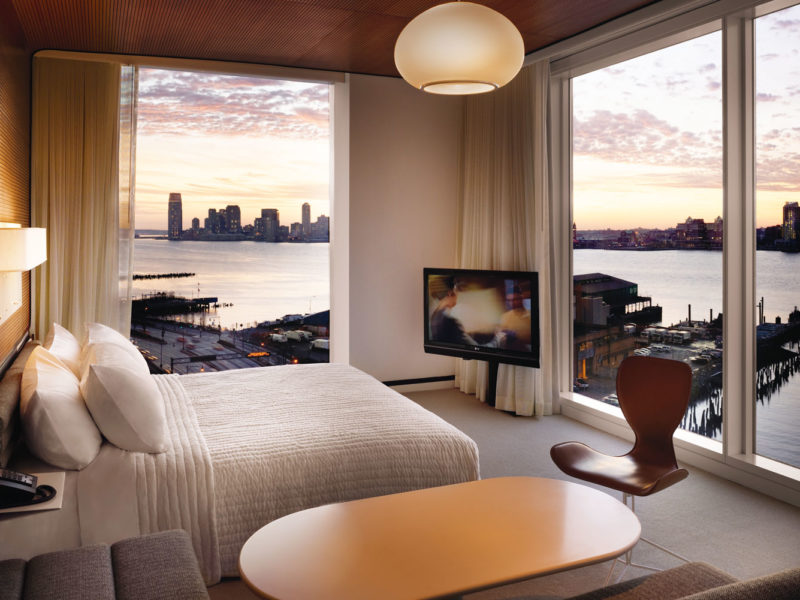 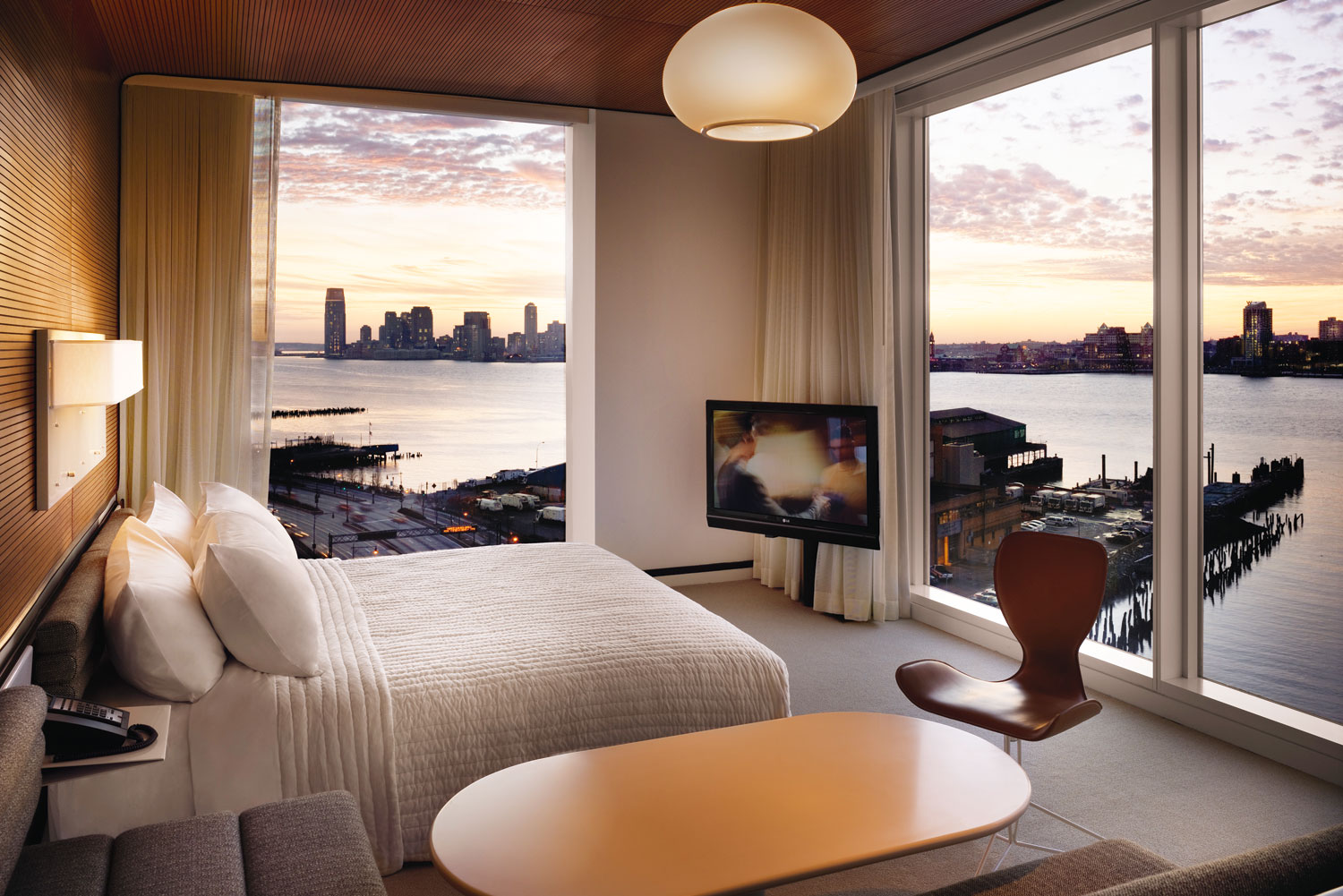 When it opened, The Standard High Line was the pioneer for the next generation of urban hotels. Quentin Long checks in to find out if it still is.

Macy Gray is laughing and sipping with mates across the bar from me but it’s the tap dancer that is the real attention grabber.

His percussionary exertions accompany the jazz quartet’s big brassy sound. He jigs and jags across the crowded bar floor accompanied by woops, hollers, clapping and laughter from appreciative patrons.

His spirit-lifting antics make the $16 Japanese craft beer I am sipping on a great investment.

“This is the quintessential NY moment”, I write in my moleskine. I am not prone to hyperbole but this is the way to start a great New York City night; watching the sun set across the Hudson from The Top of the Standard (formerly the Boom Boom Room).

And that’s exactly what legendary American hotelier André Balazs set out to create when he opened The Standard in 2009: an unashamedly chic destination hotel that was the ultimate expression of New York City.

Balazs chose the area wisely – the rejuvenated and upmarket Meatpacking district. High-end boutiques were replacing grungy S&M clubs and the entire district on the lower west side of Manhattan was becoming a haven for celebs and hipsters.

Checked in and guided through my room by the enthusiastic bell boy, my room feels like the inside of a plush shipping container designed by a Scandinavian.

The curved deep blonde timber ceiling envelops you and feels embracing as opposed to constrictive. A deceptive spaciousness is created by the white utilitarian furnishings throughout.

Scandinavian finishings aside, the room amenities are as surprising as tap dancers launching themselves onto the bar room floor.

The mini bar comes with a dazzling array of goodies and spirits – it’s the first to stock my favourite Grand Marnier but I pass on the Elderflower Liqueur. A decent cocktail recipe card assists in raiding the bar.

The socks, scented candle and earphones are a thoughtful touch; the condoms probably a public health benefit. And to encourage slightly more high-brow entertainment, a book of short stories is on hand and eight art house documentaries are complimentary on the in-room entertainment.

But it’s the exterior that is the hallmark of the hotel’s design genius. Sitting on concrete pylons, the building straddles the High Line, the über successful public park-cum-walkway, synonymous with the Meatpacking District’s revival.

The architecture has been applauded across the globe for its Le Corbusier inspired design (Ennead, the firm responsible, won an AIA National Honor award for the project). The use of concrete and white glass as the primary material moved World Architecture News to describe it as “instantly modern, if not instantly iconic”.

The hinged façade of the hotel ensures every room has a view of the city skyline or Hudson. And vice versa.

Several early guests were spied in flagrante delicto leading to some interesting New York Post headlines and this welcome from the GM: “When the curtains are open, any activity in your room may be visible from the outside.” This visibility has become a virtue for New York’s exhibitionists who are now, irritatingly for the operators, regulars of the hotel.

The huge public spaces under the hotel’s pylon foundations draw in locals and guests alike. The signature Standard Grill on street level is not for vegeterians as every cut of every animal comes flying off the grill.

The dry-aged rib eye for two is the signature dish but this single diner opts for the flash seared lamb chops with crisp confit potatoes. Juicy and glazed in flavoursome fat, it’s uncomplicated high-end comfort food.

The Top of the Standard crowd can take their partying up another level, literally, at Le Bain – the rooftop club covered in fake grass and kitsch pastel décor, that anywhere else would be viewed as pretentious.

But the Standard High Line is not without flaws. Four years in, the scuffed walls could do with a touch up. The staff is mostly friendly and helpful but a snooty maitre’d at the Top of the Standard needs to take a step down from her high horse.

The lobby lacks the buzz and theatre of the rest of the hotel, and there are some dead spaces around the ground floor that fail to replicate the energy levels so successfully created elsewhere.

In total it is a fabulous experience hotel perfect for old NY hands who know where they are going and what they are doing.

The Top of the Standard is a must for any New York visit: get there at sunset for amazing views and a seat.

The IT verdict: A fab mix of incredible architecture, well executed design with quintessential New York style and energy.

Notes: Quentin paid $475 (including taxes) for a standard queen

The Maritime Hotel:
The original 1966 National Maritime Union building is now an unpretentious four-star hotel with eclectic interiors.
The rooms are New York-small and famous for their five-foot porthole windows with views over the Hudson and the much maligned New Jersey.
The Italian restaurant La Bottega, with its huge open-air terrace, is a hit with hipsters.
From $325 per night.

The Jane:
From the same design team behind The Maritime, The Jane is an old sailor’s home built in 1908.
In fact, it housed survivors of the Titanic so has a ship load of history.
Restored in 2008, it is a favourite with Australians for its affordability mixed with character and an excellent bar.
Entry-level rooms do not have their own bathrooms and make matchboxes look positively spacious.
From $82 per night. 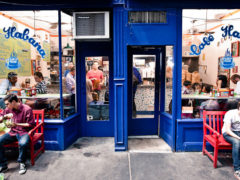 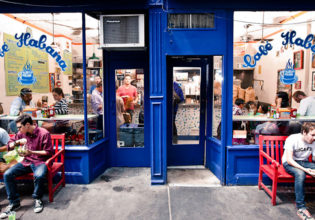 Dimity Noble – once a downtown local – returns to New York to relive old memories and hunt for new ones.  (more…)... 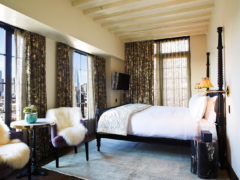 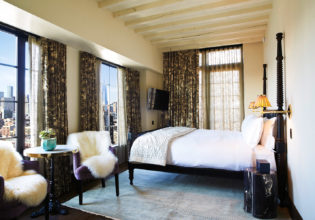