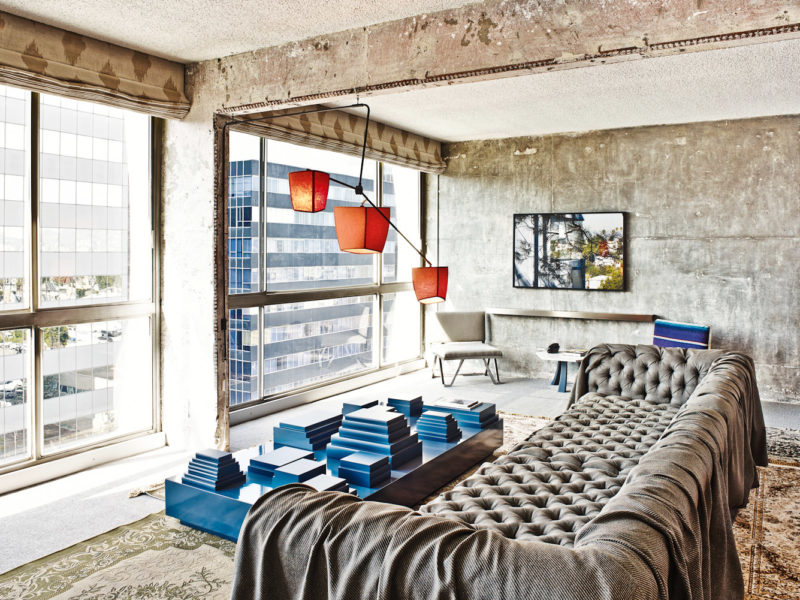 The interiors were designed by landscape-cum-interior designer Sean Knibb who filled the rooms with cool and eclectic furnishings. Not all walls were concrete so he created custom-made wallpaper that looks just like the real thing.

“How long you folks staying in Koreatown?”

The Korean taxi driver seems amused – or perhaps bemused – by the idea of us staying in one of the city’s grooviest, but still slightly gritty, up-and-coming ’hoods.

When we get out at The Line Hotel, surrounded by heavily tattooed Koreans, Latinos and assorted young Angelenos, to the deafening sound of gangsta rap surging from the lobby, he seems worried.

Actually, we’re a little worried ourselves.

Once inside, however, the staff members on the front desk are charm itself. They dance as they speak – or rather shout over the din – and suggest we upgrade from a ‘Standard’ to a ‘Hollywood View’ room because it might be more quiet.

While they reassure us the DJ usually winds up around 1am mid-week, the music can travel up on the lobby side. We don’t take much convincing.

Just when it looks like they can’t actually find a Hollywood View room, one of the receptionists says, “We’re upgrading you to a suite on the 12th floor”. Sweet!

Choi has gone from chef to food-truck superstar to style-setter, restaurateur and cookbook/memoir author faster than you can say short-order cook. His Kogi food trucks put a new spin on multi-culti with his Korean barbecue-stuffed tacos, and his creative style permeates The Line.

Our suite is like an industrial shell – raw, rough concrete walls and exposed conduits, but with floor-to-ceiling windows (that open) and a bed that’s strategically positioned for the view, and supremely comfortable into the bargain.

There are pinpoints of colour in the dangling, angular, orange lampshades, Mexican fabrics and commissioned artwork. There’s also serious attention-to-detail in the quality of the bedding and the fittings: a huge TV, full-size desk, recharge station for all your iThings, a bedside remote to operate the lights and blinds (including block-outs – perfect for late-sleeping rock stars).

The suite has a sitting room with a sofa that is half-chesterfield, half-drapey dressing gown, another TV and a well-equipped bar. The furniture is custom-made; a little kooky but cool.

If you do stay at The Line, definitely take a Hollywood View room, and if you can afford a suite then go for it.

From the upper levels of the hotel, it’s a great LA view, a panorama sweeping across to the magic Hollywood Hills. It positively sparkles at night (and it’s quiet – just the gentle hum of a big city).

When we wake the next morning, the softest, haziest light reveals the craggy edge of the mountains, rows of those bizarrely tall LA palms, the soft terracottas and creams of the city’s low-rise buildings, and in the distance, the Hollywood sign itself comes into focus. Truth be told, the sign does seem quite far away, but it’s strangely mesmerising.

Given Choi’s profile, much of the hotel’s energy comes from the restaurants, as much a drawcard for outsiders as for hotel guests.

The Pot is the star, perhaps because it captures the kind of down-to-earth, Korea-meets-USA restaurants you’ll likely encounter when you head out into Koreatown itself – except with louder music. It’s gutsy, lively and unexpected.

This is a 388-room, four-star LA hotel, yet its signature restaurant evokes a pared-back, brightly lit canteen.

The sometimes-cryptic menu names (Boot Knocker, Poke Me) are in English, but it feels authentic, serving up pork-neck hot pots and kimchi like there’s no tomorrow.

Commissary, on the other hand, is a contemporary LA space, a light-filled greenhouse of a restaurant with masses of hanging plants, Danish design chairs, mismatched glasses, delicate china cups and oversized flowery napkins.

The lobby can get hectic. Pot CaFé (for a quick snack or grab-and-go bakery with Asian sticky buns, coffee and free wi-fi) is low-priced, popular and buzzes in the morning.

The small lobby bar has a quirky cocktail list (curry and kimchi in cocktails – really?), but once the DJ gets going at night it can overflow big time.

And this is LA, so there’s an outdoor pool and a 24-hour gym, as well as bespoke Linus bicycles so you can get out and about in the ’hood. Just do it bro’!

The Line is a hip hotel with creative design, Korean food and music in abundance, in the heart of LA’s Koreatown.

If you’d like to see another side of LA, this is it.