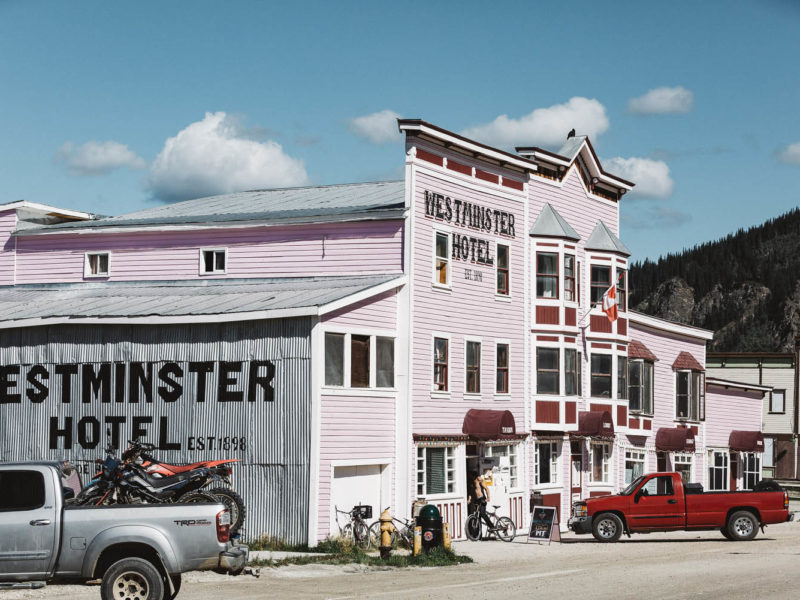 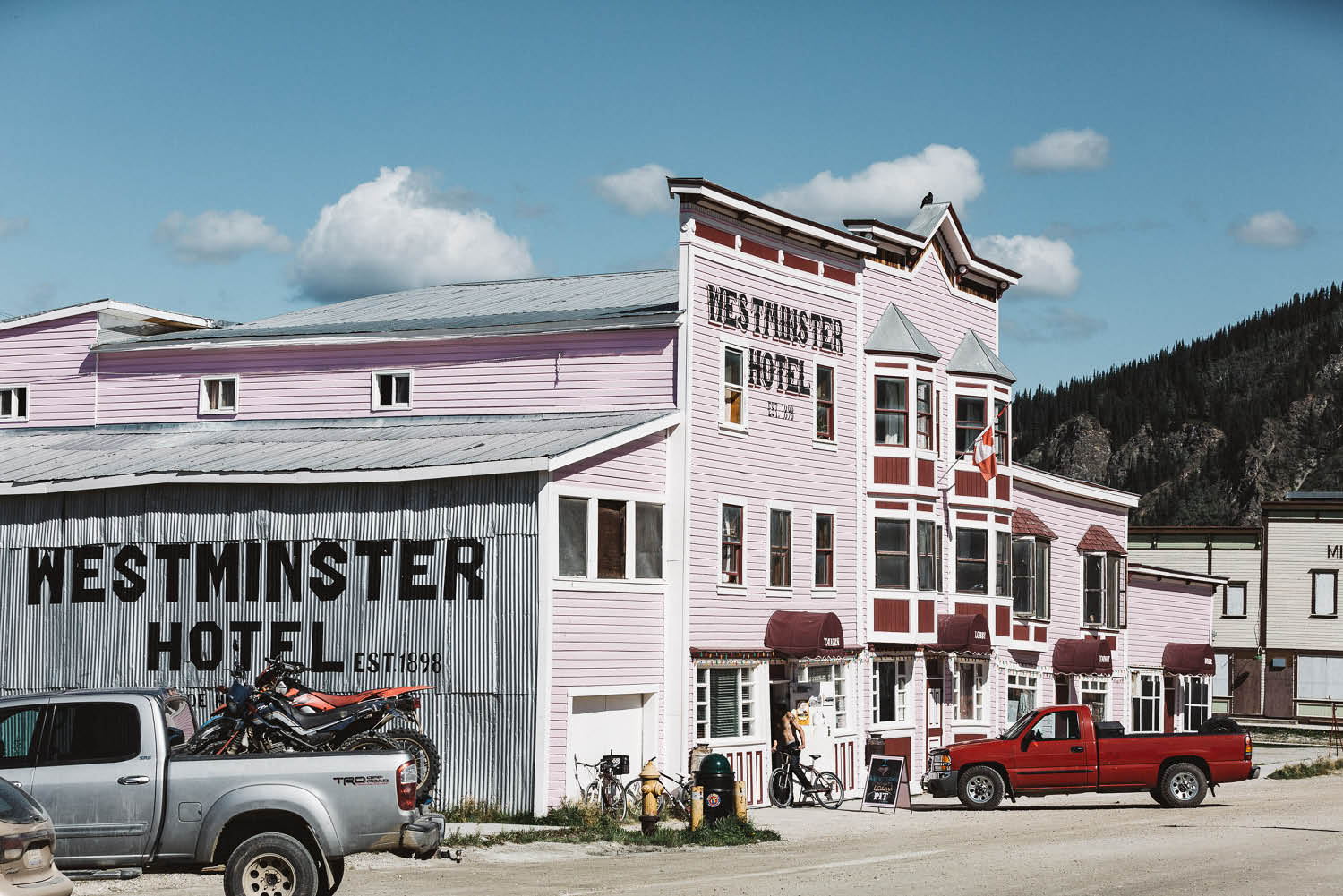 What happens in Vegas stays in Vegas, right? In Vegas maybe, but that’s certainly not the philosophy in Dawson City, the Yukon’s equivalent to the famed party polestar.

The average Dawson City (DC) local, if there’s such a creature in this distinctly un-average enclave in the Canadian subarctic, is proud of its weird and Wild West spirit. The raucous way life is lived up here is the same way the city’s forefathers and foremothers lived it.

And while Canada’s capital of the Midnight Sun is a whole lot more than a miniature Vegas, with more history, soul and presence, you don’t make it all the way to DC (well north of Anchorage, Alaska, as the raven flies) just for the peace and quiet. Yep, in a place where the sun doesn’t set until midnight in the peak of summer, a little local knowledge goes a long, long way.

The drink: The toe-kissing cocktail

Nothing shouts Dawson’s esprit de corps louder than the city’s accidental signature cocktail, which comes complete with a mummified toe in it. Yes, a human toe. Yes, a real one. Between 9pm and 11pm at Downtown Hotel every summer night, punters pay five bucks to line up and down (well, tolerate) the infamous ‘Sourtoe’ cocktail. Basically the toe (the most recent version of which was anonymously bequeathed in a will) inside a shot of rum watched over by one of the ‘toe captains’.

The secret is to let the toe kiss your lips as you slug back the drink (because there is a $2500 fine for swallowing it. And, yes, someone has swallowed one before, see the link below). The idea is that when you ‘kiss the Sourtoe’ you shed your ‘cheechako’ (outsider) status to become a ‘sourdough’ (true local), a title usually only bestowed on someone who has stayed from freeze to thaw.

Read the full story about the legend of the Sourtoe cocktail

Alternatively…
Powder-pink Westminster Hotel is the place to a meet a genuine straight-talking Yukoner. Lively and amusing, ‘The Pit’ (delineated into two sections: Snake Pit and Arm Pit) is hectically decorated with charming Klondike flotsam, murals, moulded ceilings and perpetual Christmas lights. Don’t be offended if the barkeep serves the locals first, who flock here for the live music (and happy hour) from about 6pm.

The meal: Greek Islands in the Yukon

It’s a close-run race but best restaurant option here goes to curiously named Drunken Goat Taverna. Owner Tony channels an Aegean Sea vibe with wall-length murals of Lesbos Island and plenty of airy seating options in the restaurant, bar (Billy Goats) and undercover patio out back, where local soloists amplify the atmosphere in the evenings. The paidakia (marinated charbroiled spring lamb chops) is what most people seem to bang their fists on the table for. Think carefully before ordering because each single main could feed Paul Bunyan twice over.

Alternatively…
Klondike Kates is the pick of the overtly touristy offerings; match a Deadman Creek Cranberry Wheat Ale with a serving of alder-smoked pulled pork out in the dappled and airy patio area. For a fresh and light brunch (with gluten-free options), pull up a log on the shared street-side tables at happy and hippy Alchemy Café. Tuck into the alchemy summer salad (local greens, organic apple, maple roasted nuts, goat cheese) and the best organic (or for that matter, overall) coffee in this part of the Wild West.

Two more things to know about Dawson dining: 1. Don’t bother packing your evening wear because Dawson embraces the come-as-you-are philosophy; 2. Be prepared to line up in the hot sun for the best chow houses at peak times.

The Yukon’s former capital lives in a weird hybrid of its Wild West-past (population 30,000) and the seize-the-moment present (population, a shade more than 2000 in summer). Know this and you’re on the way to understanding the place, as much as it can be understood by a cheechako.

It’s impossible to shun the gold rush-era vibe in the town centre, which has been designated as a National Historic Site, from the boardwalk-lined (purposely) dirt streets to the pastel-coloured Spaghetti Western-style, false-fronted buildings (some foundation-less ones lean at oblique angles because they are sinking into the permafrost). You’ll have no trouble locating the frontier-era icons: the Grand Palace Theatre (which once earned Dawson the moniker ‘Paris of the North’); Bombay Peggy’s Inn & Pub (“a graceful testament to its former madam”); retired paddlewheeler SS Keno; and intimate museums like the tribute to The Call of the Wild novelist Jack London et al.

However, to really unearth the eccentrics, anomalies and tragedies behind Dawson City’s reasonably orderly visage, hop on Parks Canada’s ‘Strange Things Done in the Midnight Sun’ tour (from the Visitor’s Centre). Learn about modern reluctant personalities like Caveman Bill (yep, he lives in cave, as do his chickens) and Black Powder Ray, and DC’s muddy, salacious history, from town-raising fires to a cemetery named after the disease that filled it.

For the gold-mining curious, drive 13 kilometres (south-east) out of town along a dusty gravel road into the goldfields’ moonscape for a tour of Dredge Number 4. The dormant municipal-building-sized floating gold pan used to plough the streams and rivers 24/7, catching every last bit of gold-bearing gravel (and transforming the landscape into said moonscape). If you catch ‘the fever’, stop by Claim 33 Gold Panning village (on the same road) to rent the cure: a shovel and pan.

Alternatively…
For a First Nations perspective to Dawson City, stop by the Dänojà Zho Cultural Centre back in town. The diverse and ancient perspective of the Tr’ondëk Hwëch’in (People of the River) band gives a refreshing take on the Klondike landscape; not necessarily in concert with the gold rush narrative above.

The grandest outlook over this city, which illustrates the dramatic confluence of the Klondike and Yukon rivers, is found at the Midnight Dome; up a steep, windy road accessed on the Klondike Highway heading south out of town. They used to hold midnight church services and throw parties where locals were greeted with “nuts, candies, cigars at suitably elevated prices” on this nob of metamorphic rock. Today it’s a rarefied place to truly appreciate the setting Midnight Sun at a time when you’d be long asleep back in your ‘normal world’.

Then there’s Diamond Tooth Gerties Gambling Hall, which may seem like an overly obvious perhaps too-touristy recommendation initially. It does indeed draw the (bused-up) cruise-ship crowd, but it’s difficult to avoid the lure of throwing a ten-dollar chip on the blackjack table, served by a croupier with “slow burn” tattooed across her knuckles, in the not-for-profit casino. Or pack in for one of the thrice-daily cancan shows; the later the show, the more revealing it is. Touristy? Yes. But in a weird and ironic way.

If you need just one festival to aim for in DC’s busy season, you cannot go past the city-stopping Dawson City Music Festival (held in July).

Alternatively…
Inevitably, you’ll browse Front Street’s trinket stores (The Dancing Moose is the pick for local art and ‘northern fashions’), but if you’re lucky enough to be in DC on a summery Saturday, shop with and from the real locals at riverfront Dawson City Farmers’ Market. Peruse local jewellery, organic veggies and jams (it’s a good place to replenish you fresh road-trip supplies); local remedies, potions and lotions (some spruce sap to glue your wounds together?); or maybe barter for a bear claw carved out of petrified mammoth bone (plenty have been unearthed while mining the area).

Sadly, it’s time to go… Where are you headed next?

The Arctic Circle? Come with us up the mighty Dempster; where Ice Road Truckers fear to tread

Alaska bound? Top of the World Highway to a place called Chicken 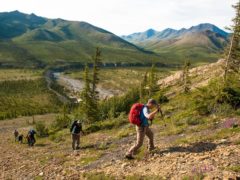 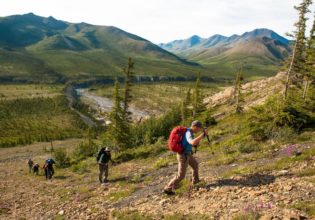 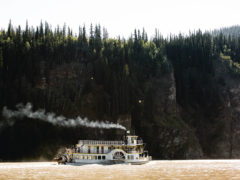 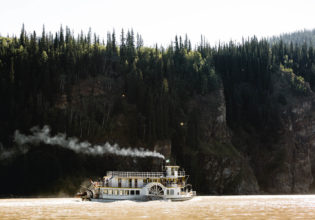 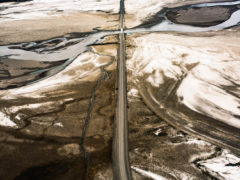 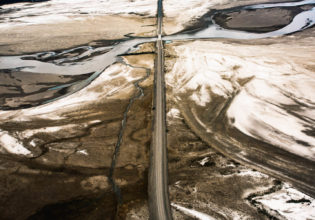 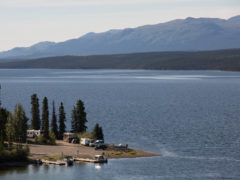 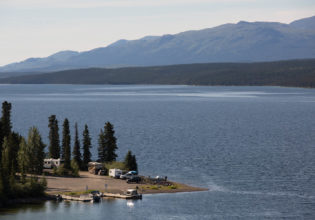