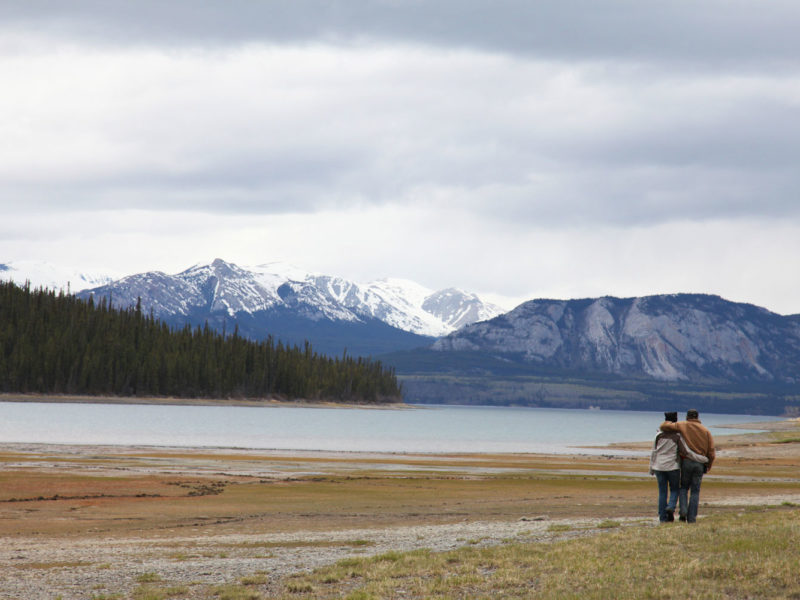 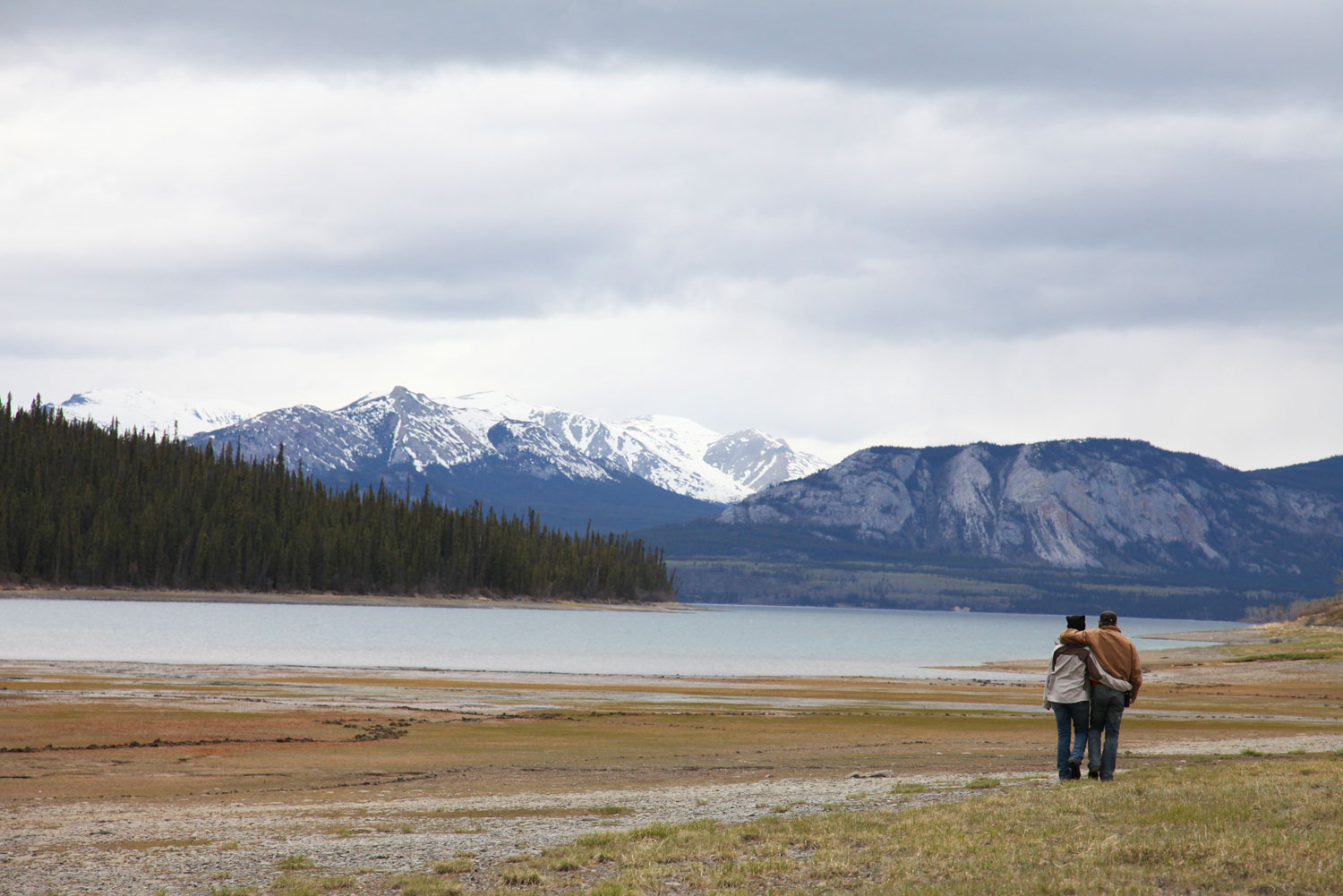 Tagish Lake in the Yukon, Canada.

In the Yukon, in the remote northern corner of Canada, Quentin Long finds the rarest of experiences, a truly pristine wilderness.

The 40-minute flight from Whitehorse to Tagish Lake is quite simply awesome.

This southern stretch of the great Yukon wilderness is an enormous network of interconnected lakes which are majestic when viewed from a float plane.

It’s an astonishing place that shares many similarities with the Australian Outback.

Although, it is probably closer to the conventional concept of beauty than the Outback; lush dense green forests that stretch further than imaginable, interspersed with deep blue and aquamarine lakes and steep granite mountain peaks dusted with snow.

Flying over the terrain the light and colours are far less harsh, severe or abrasive than the Outback.

I am thankful to be here while spring gives way to summer, because there is light.

Its location in the far north brings long harsh winters, which are accompanied by several months of darkness. And then in all that blackness, the northern lights turn on and there is another seductive string to the Yukon bow.

But the winter chill is never far away. In the week I spend in the Yukon, the frosty spring is giving way to a rather nippy summer with temperatures averaging around seven degrees, reaching a positively balmy 13 or 14 in the middle of the day.

But the real highlight of the dawning summer is each day, you welcome an extra seven more minutes of sunlight than the day before.

An extra seven minutes of sunlight A DAY! That’s a lot of light and time for me to slowly and surely be seduced by the Yukon.

The beauty is so damn bloody beautiful it is like a drug. By this stage of the year, the euphoria of huge-scale picture perfect nature is only interrupted by two hours of twilight every day. It’s a somnambular ecstasy.

Immersed in the wilderness

My ‘bush pilot’ Gerd is a typical Yukoner – ‘not from round these parts’. Arriving in the northern wilderness territory more than 20 years ago from his native Germany, he told me on the flight “I just love it and couldn’t leave, it’s the best place to live on earth.”

Swooping in to land at the lake, a little cluster of log cabins appears hidden in the spruce trees. It looks like a settlers’ camp from the air and has that pioneering wilderness feel throughout.

As we motor to the beach, the lodge owners – a mid-30s Swiss German couple named Gebbi and Sarah – are waiting to greet us.

Comfortably seated at the lodge’s communal table with a cup of tea and homemade slice, Gerd waves at Gebbi and Sarah, and by way of introduction says, “These guys are relationship counsellors between you and the wilderness.”

They are not wearing cardigans or peering at me over half glasses. It seems modern day ‘wilderness counsellors’ wear jeans, a fleece and walking boots.

Gebbi, Sarah and I return to the lakeside to farewell Gerd who, with a wing tip, disappears behind one of the mountains… and it’s just us.

No roads, no cars, TV or mobile phone. It’s us and the bears, wolves, caribou, moose, porcupines, beavers, eagles, salmon, and other arctic lake fish I have never heard of, but will certainly get to know.

The air is still and smells supremely fresh; a mix of brisk slightly piney mountain air and the margianlly flinty aroma of ice from the freezer. It’s the smell of… purity.

For many people this is a scary moment as it dawns on them that there is no easy way out. Tagish town is about 30 kilometres away and you would undoubtedly become bear or wolf dinner if, in an attack of agoraphobia, you decided to make a run for it.

I love the solitude and the feeling that I am sharing an experience with relatively few.

The lodge is fantasy made into reality; a golden timber central log cabin surrounded by four smaller one-bedroom huts with cute pitched roofs and short verandahs.

The logs, cut from the surrounding forest, have that beautiful haphazard inconsistency that signals high-quality handcrafted workmanship.

The wisps of smoke drifting from the central lodge chimney all day are like a big neon sign amongst the spruce trees screaming – “Warm, Cosy and Safe”.

Safe is kind of important out here. “All a bear sees is slow moving protein,” Gebbi tells me as he demonstrates how to use the bear spray before we head out for a short walk.

Bear spotting on the glassy lake

To explore deeper into this isolated world, Sarah and Gebbi take me on a day tour of the lake.

It is ridiculously glassy and calm and – instead of the navy blue colour from the previous day – a deep velvety black, thanks to the grey overcast day.

The mountain reflections are so perfect I almost suffer spatial disorientation and can’t be entirely sure that I am not upside down.

Around the first bend in the river Gebbi stops the throttle dead and the boat lurches to a stop casting ripples around us. On the far side of the bay, a black bear is ambling along the foreshore.

“It’s probably a male who has just woken up. The males are the first to appear and then the females and their cubs come later.” Gebbi says.

As far as a first bear spotting experience goes, it’s pretty special. At about 70 metres away the bear’s gait and snouting under rocks makes me smile. This bear has probably not seen more than a dozen people in its life.

We continue on and cross the border into BC for a spot of fishing. Sarah points out a white bald eagle nest in the top of a black spruce tree with two little fluffballs peaking their downy heads above the stick parapet.

This vivid wilderness is everywhere, you just need time to get your wildlife eyes. Back at the lodge walking to the boat that morning, a porcupine had scurried across my pathway like a pedestrian before slowing down to a sedate shuffle when safely in the confines of the forest.

Gebbi and Sarah point out feeding moose on the mountain hills throughout the days. After a while, the wildlife is positively teeming.

To make the wilderness experience as authentic as possible, we have to catch our dinner – although lunch is packed on the boat to make sure we don’t starve… I wonder, had they seen me fish before?

Gebbi takes us to one of his secret fishing spots and with the aid of his fish finder locates Lake Trout dinner. I want to use the rod but he insists on using the more efficient down rigger attached to the back of the boat (what boaties call the stern).

This early in the summer the down rigger is the only option, as the fish will be on the bottom of the lake. The Lake Trout strikes on the fifth pass and Gebbi pulls dinner on board.

But lunch is our next meal. We unload a camp table and chairs at a stunning secret beach. Sarah puts my bushman skills to shame with a roaring fire in minutes. BBQ lunch is simple and in such a stunning setting, it feels like a privilege.

I do eventually get to cast a line after lunch. A small tributary near the beach happens to be the home of the Grayling for only a couple of weeks a year.

The timing is great and we spend a good hour catching, releasing and generally annoying the cute fish with winged dorsal fins.

Like our Outback, the Yukon is synonymous with the larrikin, tough and wild-spirited pioneering personalities. While our drovers, explorers and shearers are the Outback’s icons, the trappers, gold rushers and fur traders are the Yukon’s icons.

They lived in sparse huts that are not only still standing, but often used as hunting and fishing lodges today.

Wandering around a small trapper lodge on the lake shore, I see caribou tracks across the flat lake bed mixed with enormous grizzly and wolf tracks. The size of the prints are dinner-plate huge.

From the safety of the boat whizzing up the lake back to the lodge I contemplate the enormity of the beasts who owned the tracks.

Inside the heated cabin I am, for the billionth time that day, in awe of the Yukon bush and its people. I have been immersed in wilderness, that is so obviously pristine, without fear… and with a healthy dose of comfort.

The bush doesn’t get any better than hearty home-cooked meals, a glass of wine by the fire and a big warm cabin with fluffy bed to retire to.

It’s not luxury – the long drop outhouse has to be negotiated, there is no ensuite and the food is satisfying, however by no means gourmet.

But the great Tagish experience relegates these trivial discomforts to their rightful place.

The value here is the truly pristine wilderness, which comes oh so naturally.

Tagish Wilderness Lodge
Lake Tagish, Yukon +1 867 332 2113; tagishwildernesslodge.com
The lodge is open for a summer and winter season.
Winter activities include northern lights viewing, dog sledding, ice fishing and snow shoeing.
You can even organise a dogsled arrival from Tagish.

A basic package is a three-night stay for $782 including all meals and boat transfers from Tagish.
Excursions, guided experiences and alcohol are additional.
Float plane transfers from Whitehorse should be booked with Gebbi and Sarah who use Alpine Aviation. alpineaviationyukon.com

It’s a privilege to experience such seriously pristine wilderness, and even better, in such comfort.

The outhouses can be a little chilly in the middle of the night.

The weather is arctic so pack accordingly, layer upon layer.

The water is literally deathly cold so don’t think you can have a swim… two minutes in the water and death is probable.