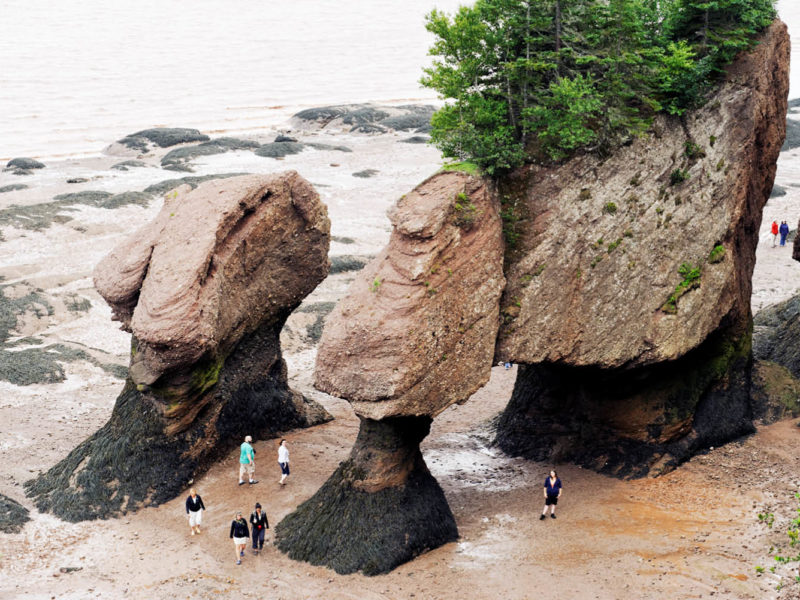 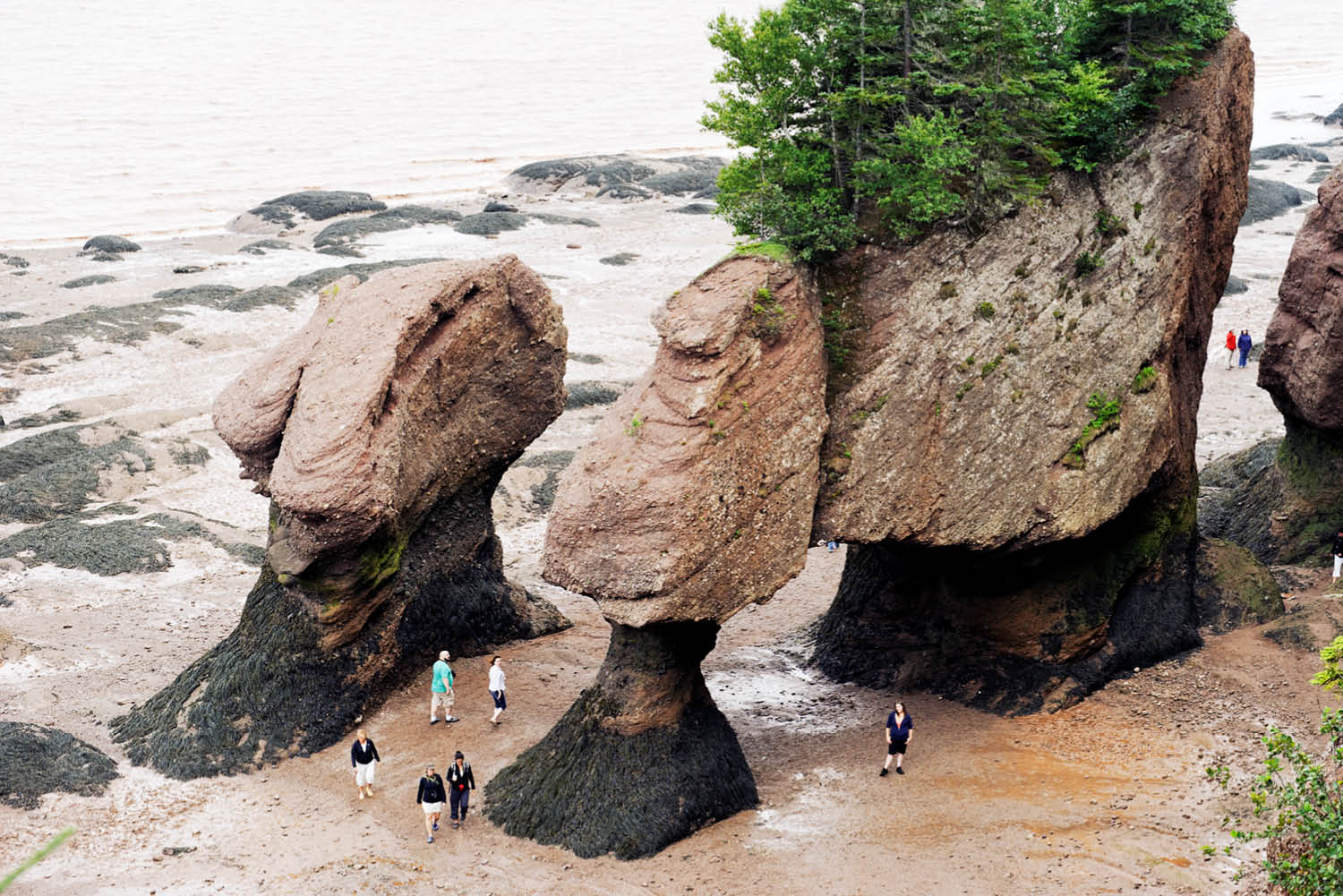 The incredible flower-pot formations of Hopewell Rocks. Here, you can walk on the ocean floor during high tide.

Stretching around the Bay of Fundy, the east Canadian province of New Brunswick lives and breathes a seafaring life. Lara Picone unveils just a few of the reasons why this undiscovered region is fast becoming a must-visit.

I am standing in a spot where, just a few hours ago, I would have been submerged under metres of seawater. But the water is not here. It has up and left as though it had a prior engagement elsewhere. In its place are throngs of tourists strolling the ocean floor, posing for photos where once fish would have been swimming.

Towering above are bizarre sculptural formations. Strange, triangular pillars sporting hairdos of fir and spruce. They remind me of the floating mountains in Avatar, but they remain anchored to the ocean floor by their wave-worn pedestals, some of which are covered in a shagpile of seaweed.

Walking on the ocean floor is a non-negotiable experience on a road trip through Canada’s Atlantic province of New Brunswick. But it’s not the only highlight you’ll encounter in this region that seems blessed with an over-abundance of natural beauty, from stunning hikes to seaside towns.

But back to the aforementioned formations affectionately known as ‘flowerpots’. These are a highlight of the natural phenomenon that is the Bay of Fundy and its monstrous tides. The tides can reach up to 15 metres, expelling and swelling with 160 billion tonnes of seawater twice a day, making them the highest tides on earth.

At Hopewell Rocks the might of the legendary tides are, arguably, more obvious than anywhere else. You can even experience both high and low tides in the one day, if you plan it right. As the water returns, hop into a kayak and paddle about the base of the formations, then, once they’ve receded, stroll the caves and ‘roots’ of the flowerpots. It’s a little like poking about in someone’s house while they’ve gone out. There’s a voyeuristic thrill of being somewhere you can’t usually go; well, not without scuba gear, at least.

Hopewell Rocks is open seasonally from mid-May to mid-October, so be sure to check the season dates of the park before you leave, and you’ll want to know the timetable of the tides, too.

On your hike at Fundy National Park

Once you’ve walked the ocean floor, it’s time to point those hiking boots toward the forest floor. The Fundy National Park offers more than 100 kilometres of trails for the outdoor enthusiast, with varied hikes to suit anyone’s stamina.

There are trails that take you by the beautiful Point Wolfe (The Shiphaven Trail), beneath a canopy of 200-year-old sugar maples (Maple Grove Trail), and to the base of thundering waterfalls where, in summer, you’re likely to see hikers stripping down to their bathing suits to refresh in the cool, pristine waters. The Dickson Falls Trail is the most popular trail in the park (perhaps because it only takes 30 minutes?), weaving you through Fundy shore scenery to its highlight: the most photographed waterfall in the park.

If you’re looking for a slightly more robust walk, hit the Laverty Falls Trail, which takes about two hours to complete. Once you reach the falls, find a suitably smooth boulder and produce a sticky bun from your backpack, which you had the foresight to purchase at Kelly’s Bake Shop in the nearby town of Alma, and enjoy the sound of the rushing water as you nibble at the cinnamon-sprinkled treat. Of course, the calories are entirely justified by the 5km-return hike.

In summer, the trails are full of happy hikers and their dogs (yep, dogs are allowed in the park), giving the jubilant, ruddy-faced salutations of nature-buzzed walkers as they pass. But, as with any foray into the forest, jubilance can dissolve quickly if you’ve been negligent in your preparations, so make sure you have enough food, water, and appropriate clothing, let someone know where you’re going, and take any rubbish out with you. Give yourself enough time to fully enjoy the park and arrange accommodation nearby so you needn’t rush off. Such is the beauty of the Fundy National Park that no matter how much time you allocate, leaving will always tug on the heartstrings. Still, New Brunswick holds other gems to lure you onwards.

The not-so-underground revival of Saint John

Full of expectation, I draw back the curtains of my waterfront hotel room in St John and see… absolutely nothing. A heavy fog has descended on New Brunswick’s historic port city. It looks so impenetrable you might need a scythe to cut a path through it. I know there’s a harbour out there somewhere, complete with cranes and ships, but it’s been consumed by the hungry fog. It’s simply absent; not even vague shapes can be discerned, as if everything from beyond the window glass is shrouded in an invisibility cloak.

Despite its completeness, the fog lends romance to this city on the Bay of Fundy. When the fog eventually lifts its heavy skirts and walks off, the grand buildings below are revealed. Not to be confused with the city of St John’s in Newfoundland, St John (minus the possessive ‘s’) is an architectural treasure seated at the mouth of the St John River. After a devastating fire in 1877 reduced much of the city to ashes, the population galvanised and rebuilt, thanks in no small part to Irish labourers. The history of this loyalist city built by the wealth of its shipbuilding and lumber trades is palpable as you stroll the streets of Uptown St John.

Something else is palpable, too. A new chapter in the city’s history is clearly taking root. One led not by loyalists or labourers but by locals with a love for their city and a desire to share it. In this often wind-whipped and chilly port, its citizens know that creating a lively culture indoors is the best way to reinvent.

Along Grannon and Canterbury streets, among the designer furniture stores, hipster barbers, and creative agencies, stylish watering holes invite you to shelter from the elements and settle in for good food and a pint or two.

I’m seated at the bar of the cosy but very cool Port City Royal as mixologist Eric Scouten chats about foraging in forests, the St John humidity, and his baby daughter, as if we’re old friends. The menu is authentic but lifted to a cleaner, more modern palate and includes a rarity in the Atlantic Provinces… an actual salad!

There’s an almost-Melbourne vibe to the flourishing hospitality scene in St John. From the intimate whisky bar Hopscotch to the chilled beer-hall vibe of hipster hangout Picaroons General Store and the shelter-from-the-world ambiance of Happinez Wine Bar, you could spend a good day or two sampling a city on the turn from plain-cold to downright cool.

Were you to ask a Hollywood filmmaker to manufacture the perfect North American town, I imagine it’d look much like Saint Andrews in New Brunswick. In fact, strolling Water Street you almost feel as though you’re an extra on The Truman Show, such is the perfection of the sweet shopfronts and beautifully maintained buildings. Take a detour up a side street toward the very fine Algonquin Resort and the illusion remains intact with immaculate homes that span architectural styles from Georgian to Queen Anne and Norman Farmhouse.

The real showpiece, of course, is the Algonquin Resort. Overlooking the town below, the sprawling Tudor-style 1880 building was tenderly restored to the tune of $30 million between 2012 and 2014. Naturally, the hotel’s golf course is a major drawcard, but it’s the private beach, Katy’s Cove, which opened in 1907, that gives the resort a little of its bygone era charm.

If you’re plush enough to stay at the Algonquin, it can require a herculean effort to will oneself outside the grounds, as you can very easily lose days flitting between the pool, the spa, Katy’s Cove, and the excellent restaurant. However, sacrifice a poolside cocktail or two to explore the seaside town and you’ll be glad you did. After all, Saint Andrews was recently voted the Best Destination in Canada by USA Today. Judging by the amount of Americans ambling the waterfront, the accolade is a living and breathing truism.

Once you’ve tallied some hours pottering the homewares stores on Water Street, join a whale-watching tour, then head to the highly regarded Rossmount Inn for dinner (you’ll need to book in advance). Plan a step back in time to drive across to the historic Ministers Island, a part-time island accessed only at low tide between 8.30am and 1.30pm. This historic estate was once the summer home of Sir William Van Horne, the president of the Canadian Pacific Railway, and remains incredibly well preserved today.

With the highlights of New Brunswick in your wake, the next stretch of your Atlantic Provinces road trip awaits. Make a promise to yourself to return to idyllic Saint Andrews one day, and set a course for Prince Edward Island because the Maritimes have much more to reveal yet. 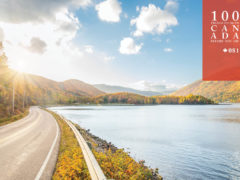 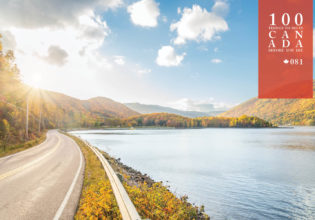