The northern lights of Manchester 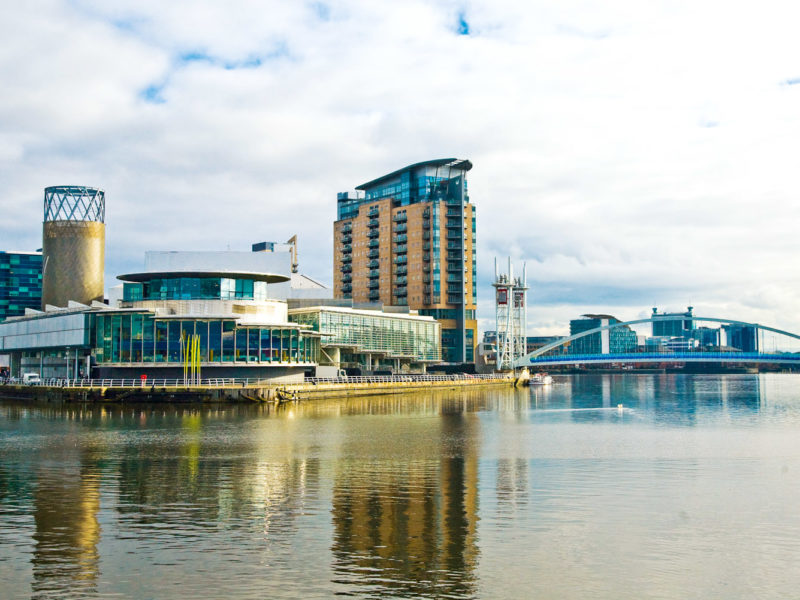 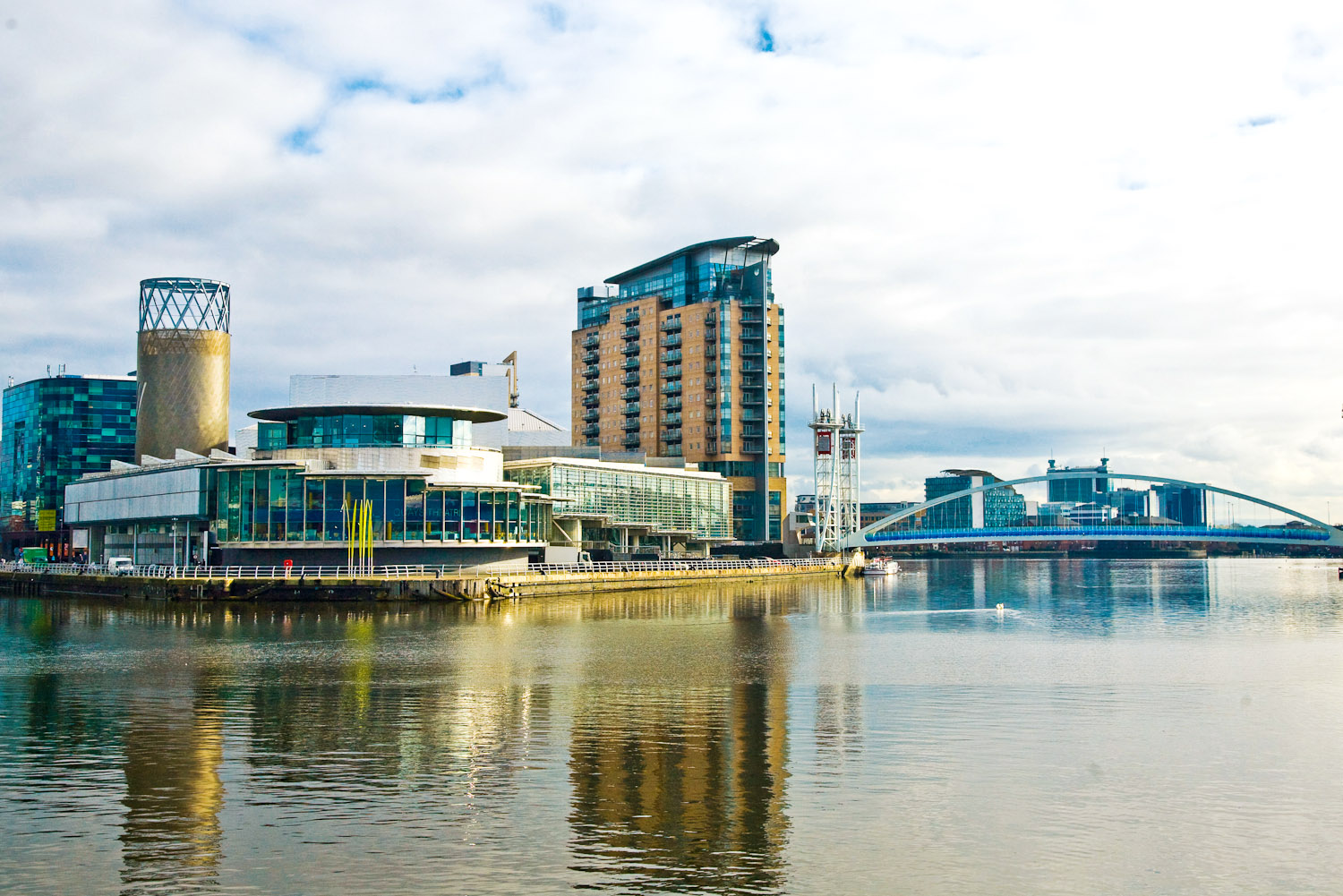 Looking across the River Irwell, Manchester.

Boasting funky new urbane redevelopments, centuries of history and a few half-decent football teams, Manchester has definitely outgrown its dour industrial past. Andrew Marshall sees the city’s colour, culture and cool from the back of a cab.

Welcome to Manchester,” says taxi driver and tour guide John Consterdine, as I hop into the back of his classic-looking black cab outside Victoria Station, one crisp February morning.

“We have a lot to see today. In fact, I will be taking you on a 2000-year journey from Roman times, through the medieval and industrial periods, then bang up-to-date with Media City and some music, football and stunning architecture thrown in for good measure.”

John gets the tour underway by pointing out a few places of interest in the vicinity of Victoria Station, including the National Football Museum (containing over 140,000 items of football memorabilia), the Arndale Centre on Market Street (the second busiest shopping street in the country after London’s Oxford Street), the Printworks (once the largest printworks in Europe and now repurposed as a popular entertainment complex) and one of Europe’s most sustainable buildings at One Angel Square.

Fifty-two-year-old John is Manchester’s only qualified green badge guide and black cab driver and was awarded the ‘Tourism Star of the Year’ at the Manchester Tourism Awards in 2013, no less.

He has a natural charm and a genuine passion for the city where he grew up, lives and works.

“There are two things that people generally assume about taxi drivers: they know the city like the back of their hand and are not easily lost for words. I’m proud to say that both of these are true of me,” he says with a smile. “Some people have this preconceived idea of Manchester as a grim northern city but this couldn’t be further from the truth. I want to show visitors the different aspects of Manchester and how they mesh together to make it whole.”

Our first port of call is Chetham’s Library, situated in the medieval quarter just a stone’s throw from Victoria Station.

Chetham’s was founded in 1653, making it the oldest free public reference library in the English-speaking world.

It was the meeting place of Karl Marx and Friedrich Engels when Marx visited Manchester during the mid-1800s, and it’s fascinating to view the economics books that Marx was reading at the time and to sit at the window table where Marx and Engels would chat.

Next on the schedule is the trendy Northern Quarter, where John points out his favourite watering holes like the Hare & Hounds and The Millstone.

“These are typical Manchester pubs where you bump into your mates after work,” he says. “And when it comes to food, I’m a regular at Williams Sandwich Bar: it serves brilliant homemade soups, especially the pea and ham.”

Since it was rejuvenated in the 1980s the Northern Quarter has been Manchester’s alternative music, fashion and café culture hub.

The main artery, Oldham Street, is where the pick of the establishments are located such as the legendary Afflecks Palace, a sprawling emporium bursting with retro and vintage fashion; the Vinyl Exchange (dealing in second-hand records and CDs); and the Night & Day Café where booze is served in teapots and live music happens most nights of the week.

From the Northern Quarter we drive to Portland Street, just off Piccadilly Gardens, to the top level of a high-rise car park to view one of Manchester’s premier architectural buildings – the Watts Warehouse built in the mid-1800s for S & J Watts. Known as the ‘Queen of Manchester Warehouses’, it once housed the largest wholesale drapery business in the city and people came here from all over the globe to place orders for cotton goods.

Each of the five storeys of the building is constructed in a different style from Italian Renaissance, Elizabethan, French Renaissance and Flemish with roof pavilions featuring large Gothic wheel windows.

The Grade II-listed building narrowly avoided demolition in 1972, and today thrives as the Britannia Hotel, retaining many of its original features like the balconied stairway.

Only a few minutes walk from here is the Gay Village and Chinatown, which give Manchester a friendly and international flavour. And further afield is the Midland Hotel, a great place for afternoon tea, where, John explains, Mr Rolls met Mr Royce. “And the rest is history.”

Back in the cab, I ask John how he made the transition from taxi driver to tour guide.

“It was a natural progression really,” he says. “I noticed my taxi customers asking questions about various places as we travelled around, so I found myself buying books and reading up on the city so I could provide some answers. I also did a course and learnt about Manchester’s importance in world history when it comes to areas like free trade, the canal system and the Industrial Revolution.”

Next we drive down King Street – formerly the centre of the north-west banking industry and now progressively dominated by upmarket restaurants and designer stores like Liam Gallagher’s Pretty Green and Rio Ferdinand’s Rosso Restaurant & Bar – to arrive at Castlefield, the industrial and Roman heart of Manchester.

This fascinating inner-city conservation area located at the south-west end of Deansgate is home to the Roman-era fort of Mamucium (which gave the city its name), the terminus of the Bridgewater Canal (the world’s first industrial canal opened in 1761), and the world’s first passenger railway, which terminated here in 1830 at Liverpool Road railway station.

Ancoats is another significant first. Hailed as the world’s first industrial suburb, with its concentration of mill buildings (including the oldest steam-powered mills in the world), it is an important landmark in the history of the Industrial Revolution, when Manchester became known as ‘Cottonopolis’.

For many years from the late 1700s onwards, Ancoats was a thriving industrial area until suffering an economic decline in the 1930s due to a slump in the cotton industry.

In the last couple of decades there’s been substantial regeneration at Ancoats with many of the great mills converted into apartments and offices.

John mentions that the popular BBC series Dragon’s Den is filmed here, and shows me the ‘Peeps’, a series of peep holes into some of the buildings that provide glimpses into the past, including a mill interior that has been closed up since the Second World War.

We stop for lunch at the nearby Crusty Cob, a favourite among taxi drivers, where John regularly brings his tour clients. Given Manchester has two of the leading teams in England, it’s not surprising that the next stop on the tour is all about football.

At Eastlands I wander around Manchester City’s impressive Etihad Stadium soaking up the atmosphere.

Currently under development on derelict land adjoining the stadium is the Etihad Campus, which, when completed, will be one of the most expensive sporting complexes on the planet.

This ultra-modern, state-of-the-art football and training facility will consist of 16 football pitches (some with different types of surface to replicate pitches of other teams), a 7000-capacity stadium for youth team matches, a new sports centre and a hotel.

From Eastlands, it’s back to the city centre for something a bit more highbrow, The University of Manchester.

This top research and learning facility dates back to 1824 and 25 Nobel Prize winners have worked or studied here: it’s where the nuclear atom was split by Ernest Rutherford in 1917 and the first stored computer was run in 1948.

The university is also home to Manchester Museum which is definitely worth a visit (entry is free) with dinosaurs, Egyptian mummies and live animals on show.

The great footballing triumvirate of Best, Law and Charlton watch over the famous stadium in bronze statue form; tours are available or you can stock up on the latest team shirt at the club megastore.

My tour draws to a close at Salford’s The Quays, Manchester’s new waterfront destination featuring an eclectic mix of businesses and interest spots, from the BBC and ITV at Media City to the L.S Lowry museum displaying works of the painter, famous for depicting scenes of northern industrial life.

We take a lift to the rooftop of a nearby building where, with outstretched arms, John proudly announces: “This is my city – just look at that for a view.”

I take in the 360-degree panorama as he points out some of Manchester’s classic landmarks: Strangeways Prison, Manchester Ship Canal, Old Trafford, the Imperial War Museum and the new Coronation Street set.

It’s a fitting finale, a top-of-the-town view delivered by a top-notch guy.

John Consterdine from Manchester Taxi Tours (manchestertaxitours.co.uk) offers two-, three- and four-hour tours, but can also custom-make a tour for you depending on your interests.

Head to visitmanchester.com for more on the city.