Where to stay in London The breathtaking view from the Sky Lobby on level 35 of the Shangri La Hotel at the Shard.

From blow-the-budget to sensible and wallet-friendly, these are the best places to stay in London.

Our picks in Covent Garden, Soho and Leicester Square Berner’s Tavern is the ornamental and spacious restaurant housed in the London Edition.

Great boutique and buzzy hotel for a lively stay in London.

Check out the International Traveller anonymous review of the London Edition. The London Edition is housed in an old Fitzrovia Mansion. The hotel is a partnership between the godfather of boutique hotels Ian Schrager and Marriott Intrnational. A ‘medium’ room at Dean St Townhouse is very reasonable, clean and cosy. The decor is highly functional, comfortable but not boring. Just don’t trip over the bath in the middle of the night. From £255.

You have to give Dean St its dues; it is honest in room descriptions from ‘tiny’ to ‘small’, ‘medium’ and then ‘bigger’.

‘Tiny’ also means ‘tiny rate’ in a very comfortable, clean and well-appointed room in the heart of Soho. Perfect.

Check out the International Traveller anonymous review of the Dean St Townhouse. The lobby of the Dean St Townhouse. The hotel was formed form merging two Georgian Townhouses with 39 rooms of various sizes; ‘tiny’ to ‘bigger’.

Our picks in Mayfair, Marylebone and Westminster A suite at the lively secret bolthole of London, the Fox Club.

A secret, incredibly well-positioned intimate bolthole, perfect for those who love being close to the action – and for whom  a nightcap at midnight is mandatory.
With just nine rooms, the décor is understated and the rooms are London-sized, but being mid-priced means the Fox Club is a bit of a gem. A guest room at the family run Goring Hotel. You will have to like green for this room.

No. 97 of our 100 best Hotels and Resorts in the World, and English from its bootstraps up, the Goring is not only famous for Kate Middleton’s prenuptial slumber but a royal favourite and a true luxury in a grand and spacious garden. The Connaught was completely overhauled in a $150m refurbishment in 2007 reopening in 2008. 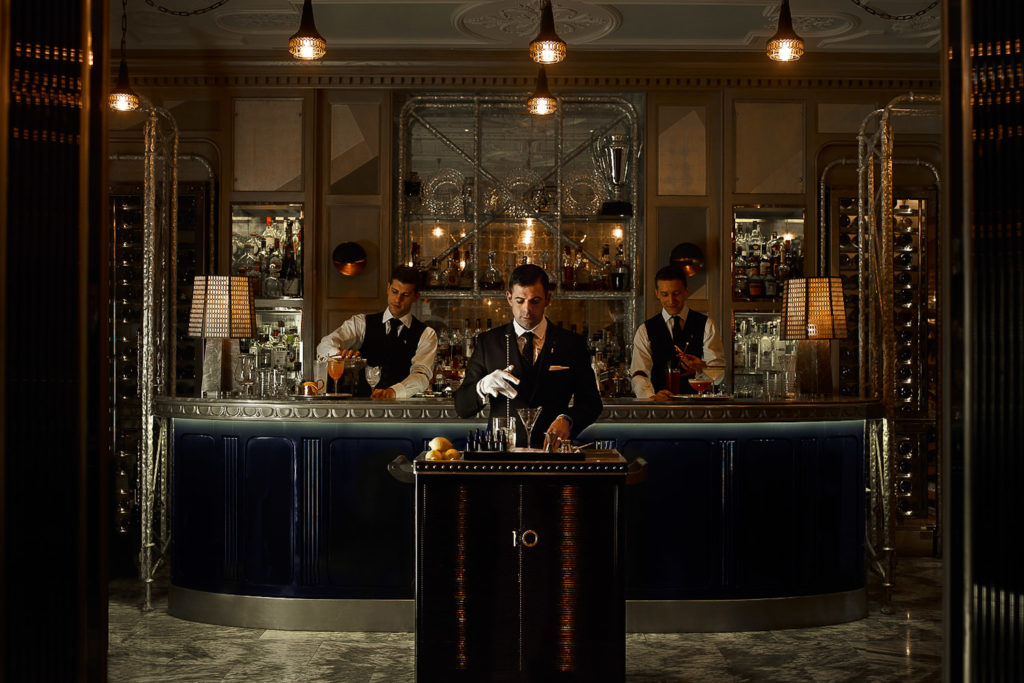 The Connaught Bar is one of the highlights of the grand old master of English Hotels.

No. 43 of our 100 best Hotels and Resorts in the World and extensively overhauled in 2009, the country house retreat made way for sleek and understated, and some might say a little too unremarkable for such an icon.

The bars are a huge drawcard for a pre-dinner sip and giggle or a nightcap and canoodle.

Our pick in South Kensington, Knightsbridge and Chelsea

Charming is often misinterpreted for doily-and-chintz hell but, in this case, it means exactly that – lovely in an inoffensive way but with decent flair and character so not ugly, not boring but just right.
With a middle-of-the-road price tag, it’s perfect for shoppers who want to max out the credit card on King’s Road rather than hotel rooms.

Our picks in Southbank and Waterloo

Shangri-La Hotel at the Shard The breathtaking view from the Sky Lobby on level 35 of the Shangri La Hotel at the Shard. Not even the Queen can wake up with such stunning views of London as guests at the Shangri la at the Shard.

Serene with spectacular views of the city and rivers, this is a great occasion hotel.

Check out the International Traveller anonymous review of Shangri-La Hotel at The Shard.

Think ‘pay for everything as you go’ but incredibly cheap for a clean room and bed and a roof over your head.

If you think ‘midnight is an early time to head to sleep’, then this is your place. (Note: it’s called Tune Hotel Westminster but is on the south side of the river.)

More hotels in Southbank and Waterloo

Our picks in City, Holborn, Clerkenwell and Shoreditch

A bakery and a hotel are not the most natural of bedmates – who wants their hotelier sneaking around at 3am downstairs? But then again, waking up to the smell of fresh cakes, breads and croissants? Yes please.
This is the affordable surprise package in a city of overblown prices and second mortgage rates. The cheap and chic stay for the young at heart, The Hoxton A standard double at the Hoxton. Design savvy and a little squeezy but at this price tag well worth it.

Promotional rates for a quid aside, this is a cheap and chic design-led hotel within gobbing distance of Spitalfields markets (geddit – gobbing distance) as well as Old Street, Brick Lane and all things hipster nightlife in Shoreditch. Relax in the lobby at the Hoxton.