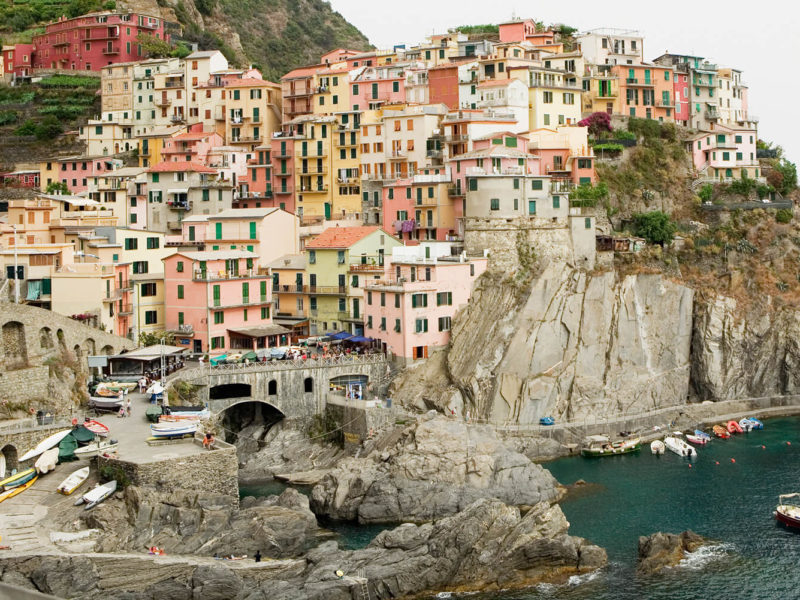 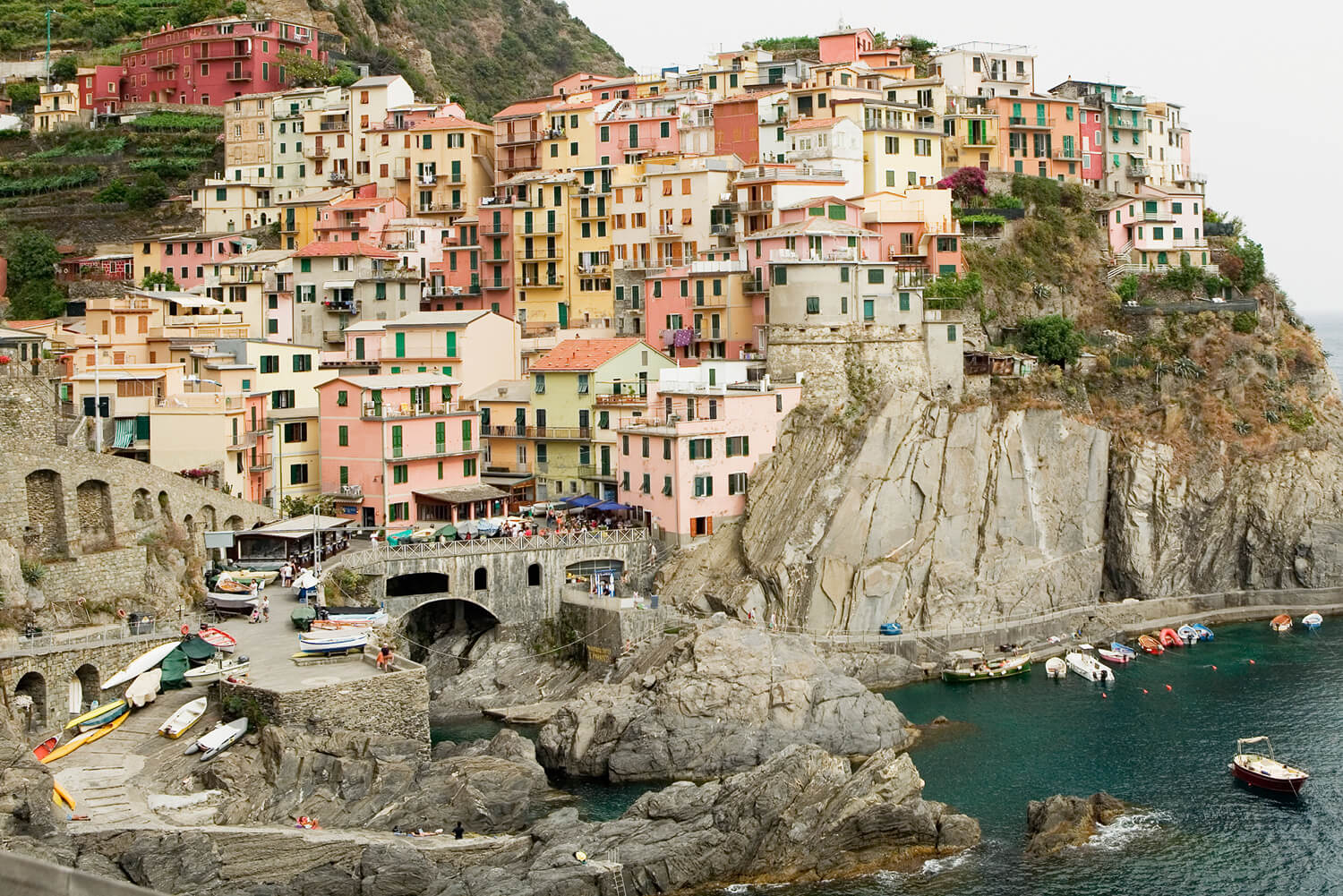 Manarola, one of Liguria's famous Cinque Terre towns, has candy-hued, cliff-bugging buildings typical of the region

Eschew the Tuscan countryside villa for a home in the hills of Liguria, a stone’s throw from the region’s coastal superstars, to truly experience the simple life in Italy. Writes Quentin Long.

While a villa in Tuscany is a fine thing, a B&B just over the border in the Ligurian hills with magnificent views – and not far from the jaw-dropping coastline dubbed the Italian Riviera – is perhaps even finer.

Living not like a local but with locals is the genuine dolce vita.

We are in search of our own slice of the sweet life as we leave the freeway just after Carrara, an hour and a quarter out of Florence, and begin an ascent that would make the peloton of the Giro pause for thought.

Every hairpin bend helps to create a sense of anticipation. What are we going to find at the end of our climb?

The GPS becomes a little confused by some classic Italian road planning; a forked road presents the quandary of both prongs having the same name, Via Marciano. Welcome to the quirky nuances of local life in Liguria.

Naturally we venture along the wrong Via Marciano until our little Fiat 500 ends up on a dirt road where we are one small wheel width away from a fast descent.

After a call to our hosts, we correct ourselves and head along the right Via Marciano, and continue to climb.

Arriving around one more bend, parting yet more picturesque olive groves and vineyards, we arrive at Casa Colleverde.

An unpretentious abode, it sits snugly on the hill surrounded by the greenery of small shrubs and trees (Casa Colleverde directly translates as ‘house on the green hill’), and looks out to stunning vistas of hilltop villages and the great, endless expanse of the azure Mediterranean.

Simon and Carmelo greet us cheerily from the top of the garden stairs, guiding us into the open-plan kitchen and plying us with a chilled glass of wine.

The house is a stylishly modern light-filled home, scattered with pieces collected during the couple’s travels, making for a cosy milieu: an ornate and grand chandelier hangs over the main stairwell; a print of Michelangelo’s David’s face with red overprint is a feature in the dining room; African art pieces are dotted in nooks and crannies throughout.

Before the second glass of crisp local white is poured, Simon has us organised; dinner reservations at a few local haunts he knows we will love and some time at a private beach club is booked.

And that’s it. There’s nothing more for us to do but head to the pool.

The early summer sun is unseasonably hot; fading the Ligurian countryside into a bleached version of itself.

Everything slows down in this heat. Except for the swallows.

They dart energetically overhead and then surreptitiously dive to scoop a beakful of water from the surface of the pool, occasionally coming so close I instinctively duck.

To the right of me, about 500 metres as the crow flies, is the village of Castelnuovo Magra.

It sits like a crown atop a limestone pillar that rises from the valley floor.

The bell tower of St Mary Magdalene church and the tower of the Bishop’s Palace stand at opposite ends of the village; their stout defiance reminding onlookers that this village has survived more than 700 years of human pettiness.

The village of Nicola is a similar distance to the left, perched atop its own slender column of limestone.

Each of the houses in the town are colourfully painted, made more striking by the terracotta roof tiles so synonymous with Italy and the faded green olive and bay trees surrounding the village.

In the distance the Magra River snakes its way towards the Mediterranean Sea just north of the port of Carrara, where for centuries the world’s most sought-after rock – white marble – has begun its worldwide journey.

Our fellow guests are two couples from the Netherlands: Anne, an actress from Amsterdam who tells enthralling tales of flying to Athens to assist refugees, and her partner Dan, a successful surgeon; and Claire and Frank who are deliriously happy in their second marriage.

Simon’s generosity with Limoncello guarantees the conversation flows into the morning hours.

The next day we head to the Eco del Mare Night and Day Beach Club, just south of La Spezia in Lerici, the hangout for the well-heeled in these unpretentious parts.

The beach is typically Mediterranean, sandy and pebbly.

The restaurant under a thatched roof and with driftwood furniture is chic and simple, like the club itself.

It is such a different experience to Australian beach days, luxuriating in the curious local concept of making beaches exclusive and private.

Twenty minutes down the road, the stunning towns of the Cinque Terre offer up more Mediterranean magic.

Living with locals allows us to indulge in the real essence of living like a local; not in the affectatious way many big hotels peddle ‘local experiences’ these days, but in a genuine, humble way.

We spend lazy days moving at the same considered pace as our Ligurian neighbours and eat at excellent restaurants populated solely by locals from the surrounding towns and villages.

Ristorante da Fiorella in Nicola is a Ligurian delight; nothing but local produce, as you would expect in Italy, the birthplace of slow food.

En route to the simple unadorned restaurant we pass the vineyard where the wine we will drink later is grown.

The menu makes no concession to out-of-towners looking for the pasta and gelato cliché.

Instead the mixed antipasti is classic, the frutti del mare a delicately translucent collection of local seafood given a zesty tang with a squeeze of lemon (local, of course).

In Castelnuovo Magra, Trattoria Armanda is another authentic find.

Dining alfresco, with views to the Magra and the sea, the menu is slightly more sophisticated: tagliatelle with truffles, stuffed veal and gnocchi with pesto. It is Liguria in a meal.

Dessert is goat’s milk ice-cream with orange sugar and an olive oil emulsion.

This wasn’t a caricature of the idyllic Italian life that visitors are desperate to consume, no matter if it is delivered in the most unauthentic way, but the real thing, as lived by locals every day.

– Emirates flies to Bologna via Dubai from Sydney, Melbourne, Perth, Adelaide and Brisbane; it also offers two-stop routes to Pisa via Dubai that connect to local carriers in Europe.

– Merrion Charles is a globally renowned private travel consultant specialising in Italy and in particular villas; positioned to help you discover the insider’s Italy.

Want to get the Insider’s secrets to the Mediterranean? Check out Insider’s Secrets: Lucio Galletto of LUCIO’S restaurant, Sydney