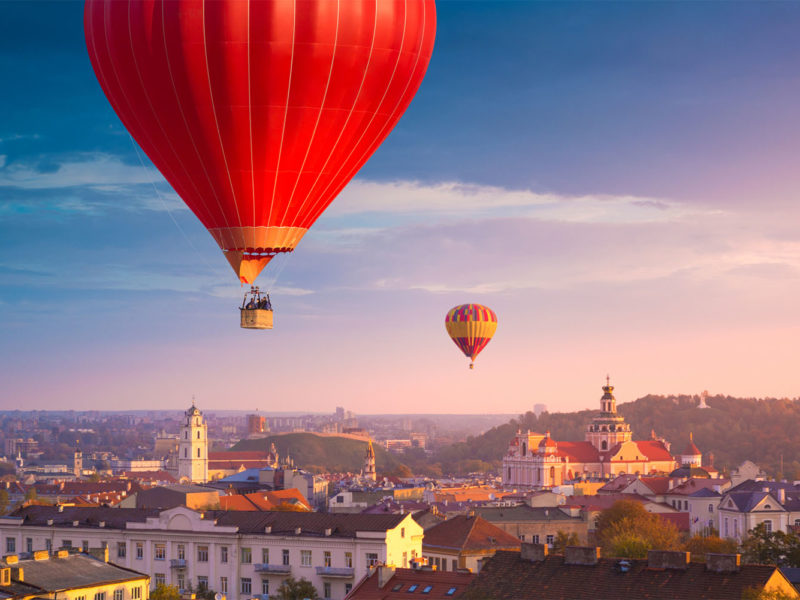 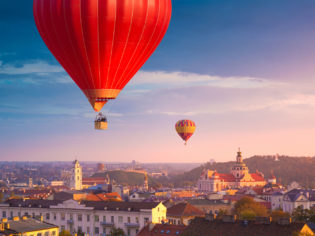 The capital of Lithuania has shrugged off its dowdy Soviet cloak and transformed into a modern vibrant mecca for artists, entrepreneurs and techies.

It markets itself as the G-spot of Europe: ‘Nobody knows where it is, but when you find it, it’s amazing.’

Explore what makes this Baltic city so pleasurable.

Located in a block of flats, the Backstage Cafe is the best secret coffee place in Vilnius. It’s notoriously difficult to find so you may be the only tourist mixing it with the locals. Backstage Cafe was started in 2017 by a couple of coffee-loving photographers (and their dog) in their home studio. It has since been transformed into a hip, exposed-brick minimalist space that still manages to feel like home. 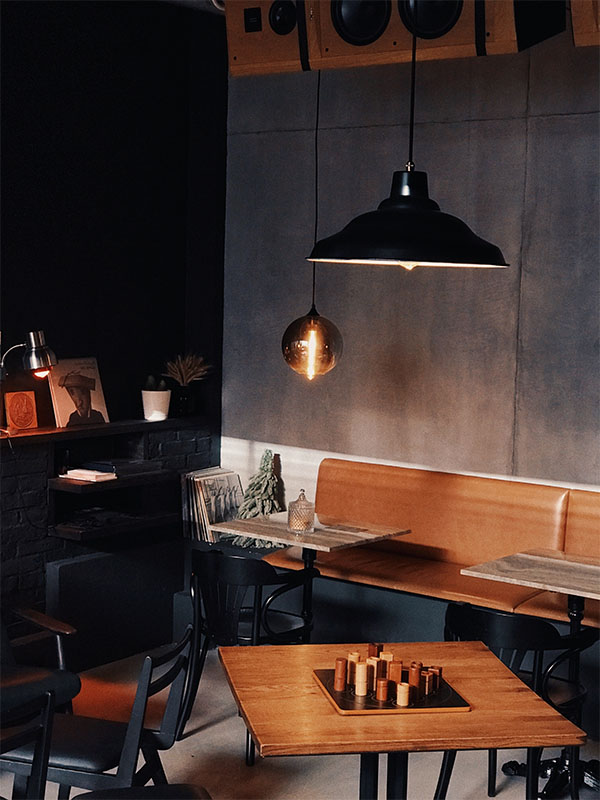 Backstage Cafe is the best secret coffee place in Vilnius

Meet on the steps of the Town Hall for the Yellow Vilnius Free Walking Tour of the Old Town. For the next two and a half hours immerse yourself in the colourful stories and tragic history of Vilnius told by young professional guides who proudly share their knowledge and hometown secret spots. Tours are technically free but tipping your guide at the end is encouraged; the amount you give is up to you.

The walking tour ends at Cathedral Square by the stunning neoclassical Cathedral Basilica. Before leaving the square, be sure to find the small ‘miracle’ (stebuklas) tile locals say was the starting point of the Baltic Way. (In 1989, about two million people joined hands to form a human chain stretching for 600 kilometres connecting the three Baltic capitals – Vilnius, Riga and Tallinn – and marking the beginning of the end of Soviet occupation of the Baltic States.) Urban legend has it that the power of this tile is so great that if you step on it and turn around three times, your wish will come true. Perhaps it won’t be as momentous as regime change, but give it a go anyway. 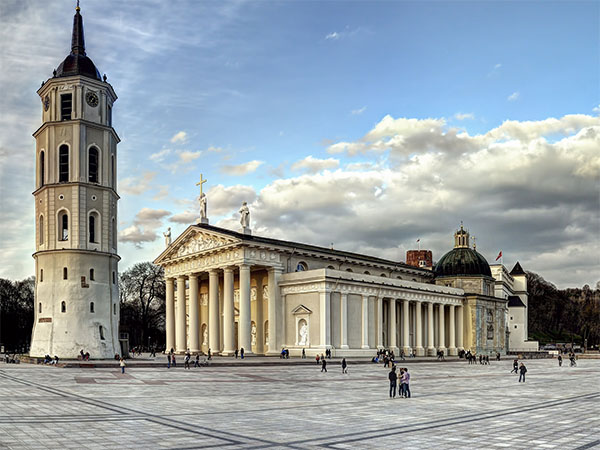 Take a walk around the Cathedral Basilica

Depending on the size of your appetite, stop for lunch at one of the many good restaurant options close to Cathedral Square.

For a sobering reminder of what humans are capable of inflicting on fellow humans, head west along Gedimino Avenue to visit the Museum of Occupations and Freedom Fights (KGB Museum). This former gymnasium was the headquarters of the Gestapo during the Nazi occupation of Lithuania in 1941 and then used by the Soviet Secret Police (KGB) when the Nazis left in 1944. The upper two floors of the museum document what day-to-day life was like in Soviet Lithuania. The prison cells and execution and torture chambers are in the basement, exactly as they were left when KGB officers made a hasty retreat back to Russia in 1991.

After the horror of the KGB Museum, it’s time to sweeten things up a bit.

Walk south down Vilniaus Street for afternoon tea at Sugamour. It’s popular with Instagrammers because of the visually stunning backdrop of bright-red painted columns, red outdoor umbrellas and climbing red roses. Step inside to order one of the intricate cakes or edible works of art. Weather permitting, get an outside table and watch all the pretty people strike the right pose.

A quick walk north-east along Dominikonu Street will bring you to Vilnius University and St John’s Bell Tower. The top of the tower is the perfect place to get a bird’s-eye view of the orange roofs of the medieval Old Town, a UNESCO World Heritage site since 1994. You can take the lift most of the way but you’ll need to climb an old winding wooden staircase to get to the top.

Lithuanian cuisine is all about the potato. And rye bread. For a taste of traditional Lithuanian cuisine, head to Etno Dvaras. Try the wild mushroom soup served in a rye bread bowl, or, another Lithuanian staple, fluorescent-pink beetroot soup with new potatoes.

The bars and clubs of Vilnius are mostly clustered around Vilniaus Street. Head there for a nightcap and to sample some of Lithuania’s craft beers. Alaus Biblioteka or Alchemikas Cocktail Bar are good options. 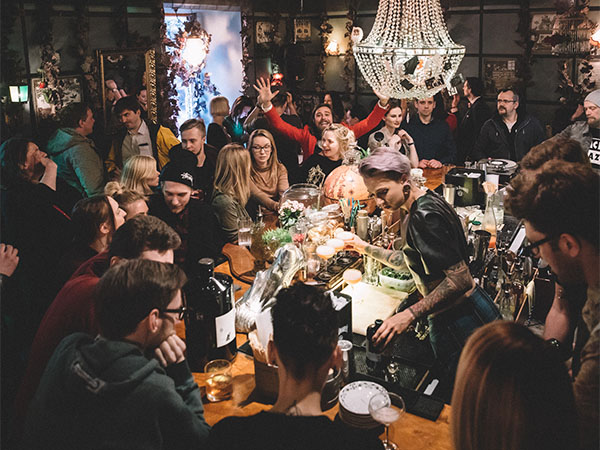 Retreat to the four-star boutique Artagonist Art Hotel, right in the heart of the Old Town. The hotel building dates back to the 15th century but has been extensively renovated. Walk through the unassuming facade of this gorgeous hotel and you’re greeted by an explosion of colour from the massive street art-style portrait behind the sculptural front desk. Each of the 34 rooms has been individually decorated with intriguing pieces of modern art by contemporary Lithuanian artists and designers. 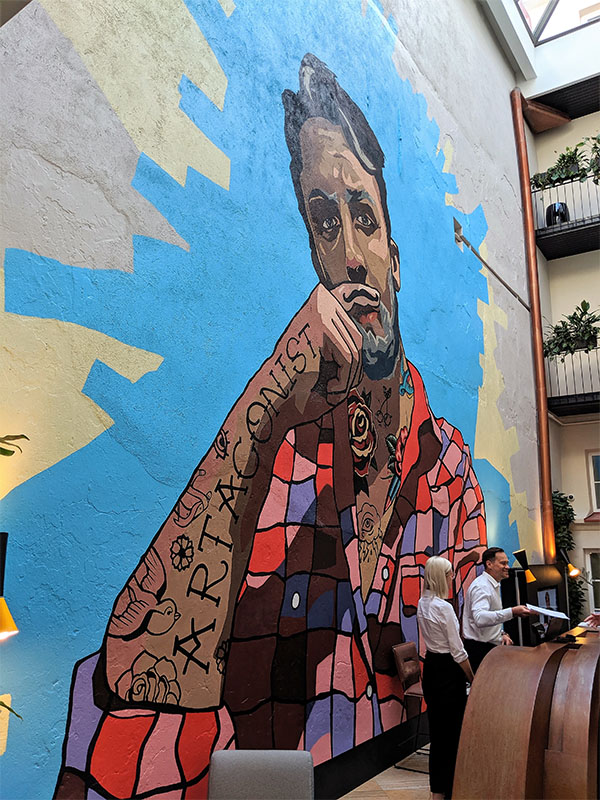 Breakfast is included in the room rate at Artagonist Art Hotel so venture underground to the restaurant in the original vaulted basement where the chef will whip up your eggs to order.

Just around the corner from your hotel is a little hidden gem called Literatų Street. The walls of this winding alley are covered in quirky tiles and plaques paying tribute to Lithuanian writers and poets. Follow this street further until you spot the 15th-century Gothic masterpiece of St Anne’s Church. It’s affectionately known as ‘the burning church’ because the deep red bricks of the spires look like they’re on fire.

Cross the bridge over the Vilnelė River and you’ll be crossing the border into the mind-tripping Republic of Užupis. It has its own bizarre constitution, flag and currency. A group of free-spirited bohemian artists and intellectuals moved into what was once a seedy and dangerous neighbourhood and declared it an independent nation on 1 April 1997. Art is everything and ever-changing in Užupis. Wander the streets and you’ll see that fun and inclusivity are what it’s all about. Look for the soaring Angel of Užupis, the fertile Užupis Art Incubator and the Užupis Constitution Wall, where the 41 Articles of the constitution have been translated into more than 50 languages and engraved onto mirrored panels.

Stop for lunch at the Uzupio Kavine, a restaurant/bar overlooking the river. You’ll see a small sculpture of the Mermaid of Užupis sitting on a ledge in the wall just above the water. Don’t stare at her for too long or you may fall for her charms and never wish to leave Užupis, or so the legend goes.

The Baltic region has one of the largest deposits of amber in the world and street vendors sell golden amber jewellery by the bucketload. But how do you know if it’s real or fake? Take a tour of the Amber Museum and Gallery on Mykolo Street to find out.

Before the Second World War and the Nazi invasion, Vilnius was called ‘Jerusalem of the North’ because of its thriving Jewish community. A new mural project called Walls that Remember is bringing back to life some of the inhabitants of the Jewish quarter. Walk the old narrow streets and you might come across a haunting wall painting of an old sage, a merchant or a couple of young boys selling newspapers.

Sunset is the best time to visit the Gates of Dawn, the only surviving gate of the defensive city wall built in the 1500s. If you time it right you’ll see the sun hitting the golden shrine of the Blessed Virgin Mary. 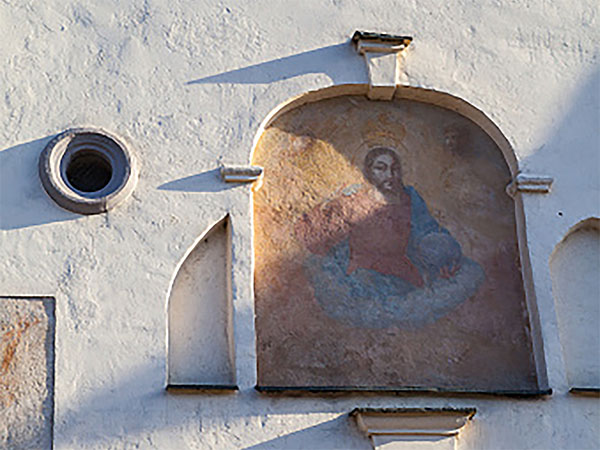 Sunset is the best time to visit the Gates of Dawn

Finish your stay in Vilnius by dining in one of its best restaurants – Amandus, located at Artagonist Art Hotel. Head chef Deivydas Praspaliauskas is regularly voted among the top chefs in Lithuania. Opt for the tasting menu and be blown away by how good modern Lithuanian cuisine can be. IT 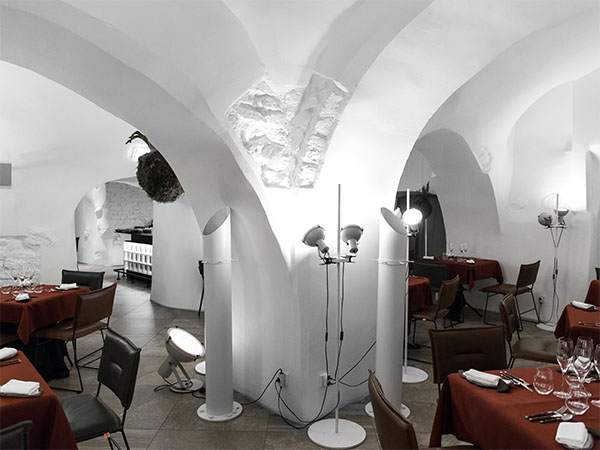 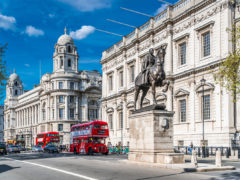 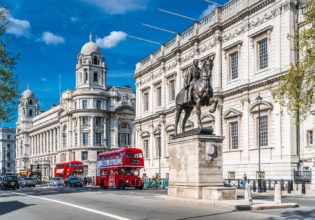 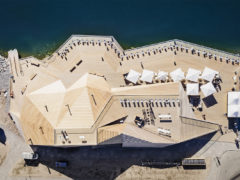 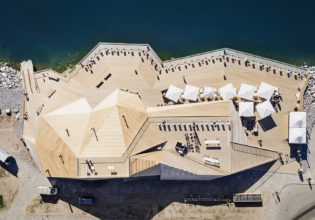 In Finnish culture, there exists a phrase - “Saunassa ollaan kuin kirkossa” - with a rough English translation of “one should behave in the saun... 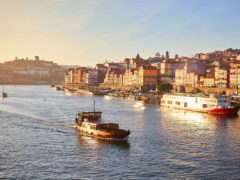 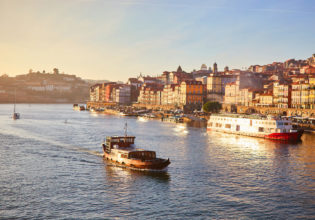 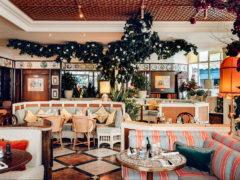 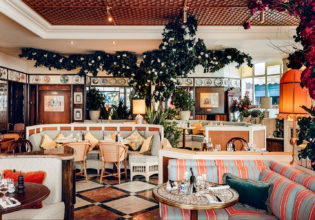 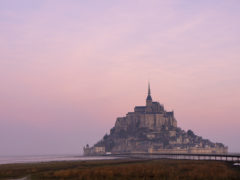 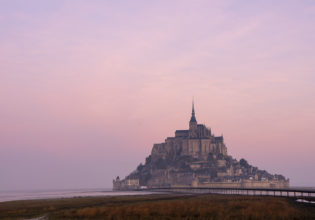 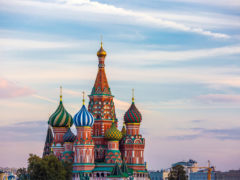