Everything to know aboutShopping in Vietnam

Clamouring markets filled with the smell of barbecued pork and shiny malls which serve Vietnam’s emerging middle class. Stalls groaning with durian, mangosteen and mangoes and rails of brightly coloured silks flapping in the steamy breeze. Stalls of roses in Dalat and pottery painted with delicate designs that nod to imperial China.

Shopping in Vietnam can provide colourful, interesting lessons into the country’s history and culture… plus you’ll come away with a suitcase groaning with great value souvenirs.

Remember not to buy antiques. Vietnam has very strict regulations on exporting antiques and most of what is on sale will be replicas, or could be stolen. If you’re unsure, ask the seller for a certificate of authenticity. 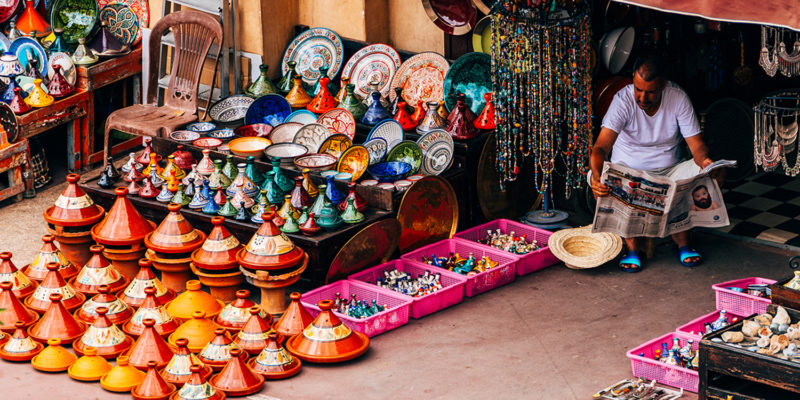 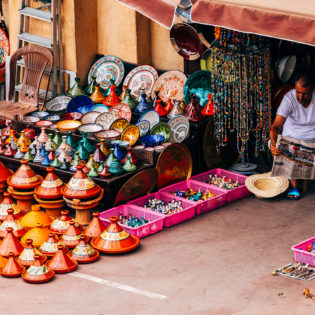 10 tips on how to haggle

Around the world bargaining is just a part of everyday transactions, but perfecting this art depends on what country you...

No guide to shopping in Vietnam would be complete without a section on haggling. Aside from in supermarkets and Western-style shopping centres, prices in Vietnam are almost always negotiable, so it’s definitely worth asking if you feel like something is too expensive. Learning a few words in Vietnamese  will go a long way, even if it’s as simple as ‘chào’ (hi).

Of course, you don’t want to look too interested, otherwise the seller will drive up the price. Practice your poker face and be prepared to walk away, remembering that many of the shops sell the same products.

While haggling can be fun once you get the hang of it, bear in mind that retail is someone’s livelihood. The average take-home salary of a Vietnamese worker is around $215 a month, and often less for people who live in the country. Generally, starting the bargaining at 50% then ending up paying 70% of the asking price is a fair deal for both of you and you’ll be leaving the shop with broad smiles and a new souvenir.

On a side note, don’t ask a price before 9am and then walk away without bargaining. Locals are very superstitious and believe that this means they will be condemned to bad business for the rest of the day.

Best things to buy in Vietnam

From exquisite tapestries embroidered with human hair to collages of painstakingly painted rice, Vietnam’s many ancient handicrafts mean there are no shortage of quirky, beautiful treasures to bring home. However, as Vietnam has an emerging economy, you can also buy things such as clothes, electrical items and jewellery for a fraction of the price.

In terms of fashion, international designer labels will cost much the same as they would anywhere else but unbranded clothes at local markets can cost just a few dollars. There is a large market for convincing fakes, but the quality can be questionable. If you want to change your luck, make sure you test zips and buckles a few times before you buy and don’t get too attached! Enjoy flaunting that Chanel bag while it lasts.

Vietnam was a major stop on the Silk Route and has a long, proud history of tailoring. Tailored items start at just $30, with suits and silk dresses costing around $143 each. Remember to factor in two to three days to get your item just right, as they rarely come out perfect on the first go and you’ll typically need three fittings.

If you’re looking to buy silk and learn more about how it’s made, head to Van Phuc Silk Village on the outskirts of Hanoi. Hanoi Goldenhands offers half-day tours.

Best cities to shop in Vietnam 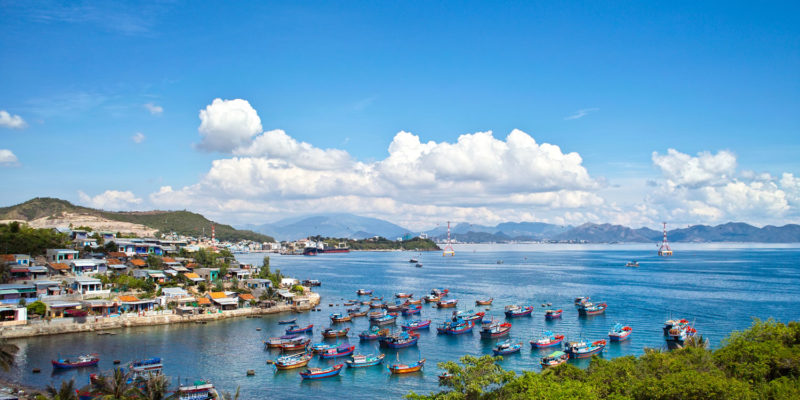 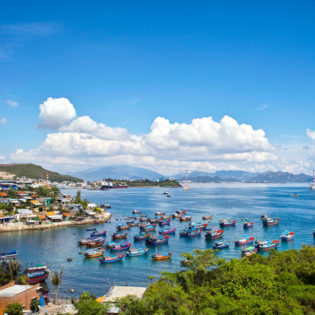 With a sweeping crescent beach and world-class diving on the doorstep, Nha Trang also boasts an abundance of bars, templ...

While you’ll find goodies such as bamboo furniture and ceramics being made by hand in breathtaking rural areas such as Mai Chau, if you’re after serious shopping, the cities are the place to go.

Interestingly, down to geography as well as a complicated colonial history, many cities have developed their own speciality products. Therefore, the best city to shop in Vietnam depends on what exactly you’re looking for.

A fascinating blend of French and Chinese colonial influence, Vietnam’s humming capital is a shopper’s paradise.

Markets such as Đồng Xuân are filled with kitsch Communist propaganda posters which make fun, lightweight souvenirs, while also telling the tale of the regime which has controlled Vietnam since 1930.

Soak up the city’s 1000 years of history in the maze-like Old Quarter. Each street has a different speciality. Hang Gai is overflowing with silk, Cau Go is a trove of women’s clothing accessories, Hang Hom is the home of bamboo crafts and Hang Can is filled with beautiful stationary.

Also worth checking out is Huu La La, which hand-embroidered dresses and blouses for women and little ones.

The centre of Vietnam’s commerce, Ho Chi Minh is a sprawling megacity on the banks of the Saigon river which boasts a dynamic tangle of leafy colonial avenues and towering skyscrapers.

You’ll find a wealth of air conditioned shopping malls which make the perfect place to escape the aggressive heat. Takashimaya is a gleaming cube filled with international brands, while Aeon Mall Tan Phu has a futuristic Japanese vibe and offers free shuttle buses and childcare.

Take a delicious bit of the city’s colonial past at Marou Chocolate. Founded by two Frenchmen, Samuel Maruta and Vincent Mourou, it was the first bean to bar maker in Asia and cacao grown in the misty highlands of Vietnam.

For a complete guide of the city’s teeming markets and key handicrafts, take a shopping scooter tour.

Your guide will be able to point out local specialities and help with haggling.

Colourful, characterful Hoi An has to be Vietnam’s prettiest town. Sure, the 15th century buildings and curvaceous bridges arching over the Thu Bon River estuary are all part of its appeal, but its charm is cemented by a huge quantity of colourful boutiques.

Once a major stop for silk merchants, today this heritage can be felt in the number of shops selling beautiful silk lanterns, which look like clusters of rainbow-coloured glow worms and make excellent-value gifts. Check out Sedge Ware Workshop on Le Hong Phong St and Nguyen Boi Lam Lantern at 97 Tran Phu.

Hoi An is the only place in Vietnam where you can order something to be tailored and it will literally be ready overnight – although of course it’s fairer on the people making the clothes if you can give them more time.

There are more than 400 tailors to choose from. Bebe is one of the most well-established, having been going for nearly 20 years and boasting a team of more than 160, while Yaly offers an extremely professional service.

A high rise party town clinging to a magnificent swathe of sand in the south of the country, Nha Trang’s shopping scene is largely defined by its geography.

Head to Dam Market for souvenirs, or for a more authentic experience get up early for a street food breakfast at Xoi Moi Market.

With a long coastline and 19 islands, it’s no surprise that Nha Trang is famous for seafood. Binh Tan and Xom Moi are filled with exotic fish, many of which have been caught by local fishermen that morning.

The area is also famous for natural pearls. Find your perfect keep sake at Long Beach Pearl or Saigon Pearl.

A tranquil, sleepy city on the banks of the Perfume River, Hue still basks in the glories of its imperial past. Its shopping scene is also steeped in tradition and it’s one of the best places in the country to buy handicrafts.

In rice paddies across Vietnam, you’ll see workers wearing wide-brimmed conical hats to protect them from the sun and rain. In Phu Cam, a traditional village on the outskirts of Hue, you can see locals weaving them from palm leaves. Many also have poems woven into them, which you can only see when you hold them up to the light.

Another very traditional product from the area is Cajeput oil, which is made from the cajeput and paperbark trees. Locals use it to treat everything from colds to skin problems and you can buy a bottle at CungDinhVy Da Store.

A fairly new addition to Vietnam’s traveller scene, this seaside resort is located on a peninsular that’s lapped by the ocean on three sides. It’s one of the biggest offshore oil fields in the country and the shopping scene reflects the town’s cosmopolitan vibe.

Imperial Plaza is a collection of luxury boutiques in a magnificent building that is worth the trip alone.

Just behind the Imperial Hotel, Vung Tau Night Market is an atmospheric place for a stroll followed by a cheap dinner at a roadside stall. The air is filled with the smell of barbequing seafood, while local children play on fairground rides and hawkers peddle everything from cheap clothes to jewellery.