Cruising in New Caledonia: from Orphelinat Bay to the open ocean 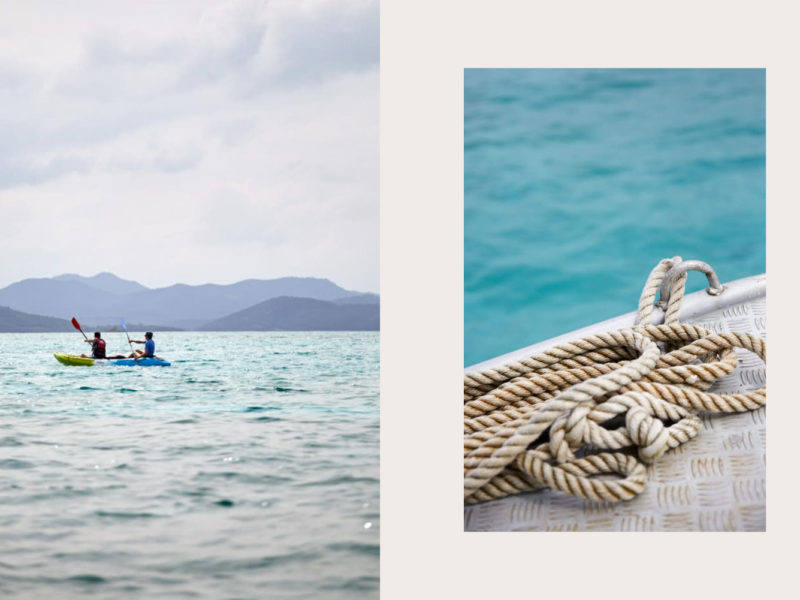 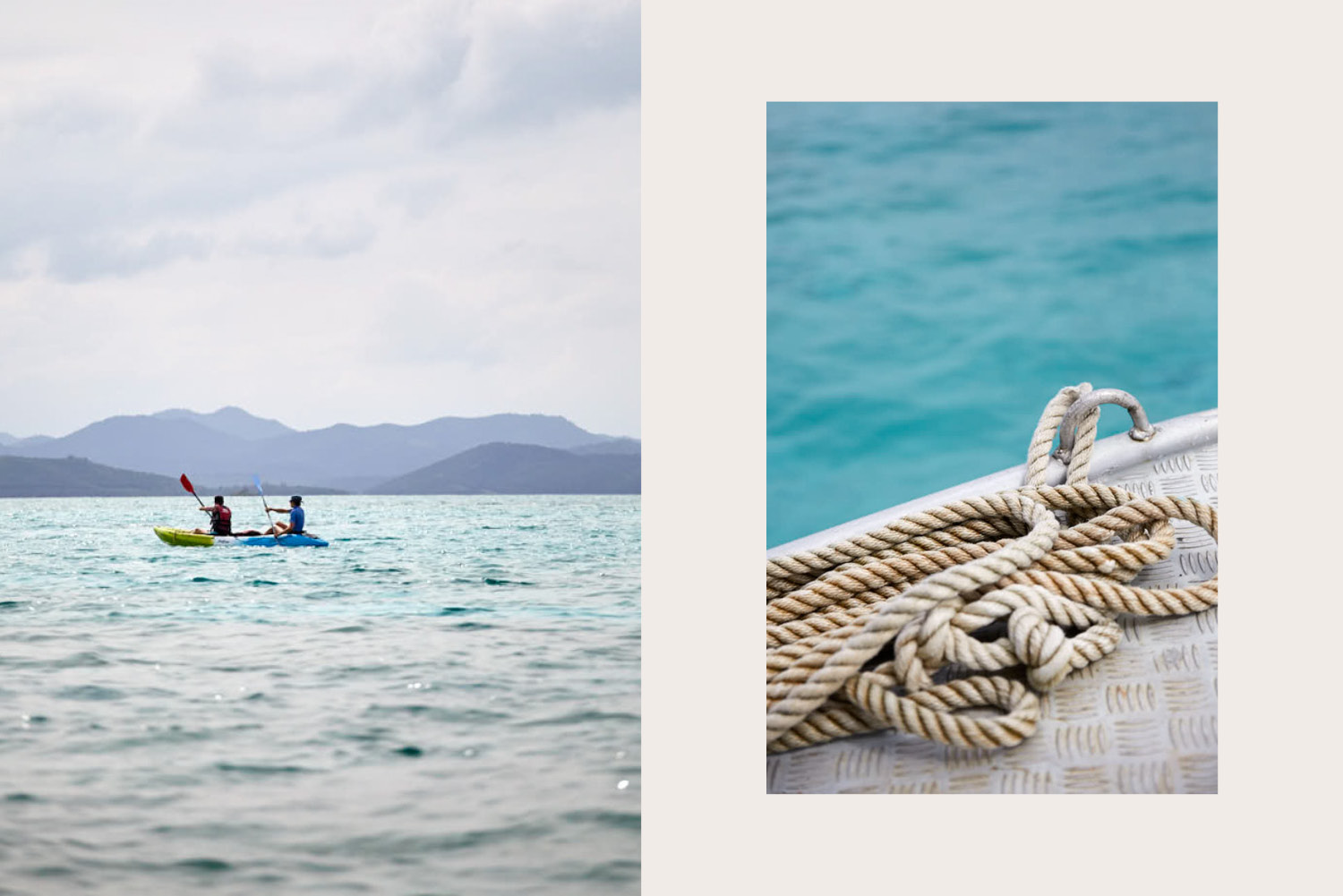 From left to right: There are many activities on or under the water. Drip dry onboard after a snorkel (photo: Nicky Ryan).

| This Article was created in partnership with New Caledonia Tourism |

I am sitting on the trampoline netting at the front of a sleek catamaran as we cruise from Noumea’s Orphelinat Bay towards the open ocean. The sun beats down but the flick of sea spray is refreshing. Beside me are Nicola, a Caledonian chef at a secondary school outside the city; and Florence, a government employee from Tahiti. The two friends have done similar trips on this vessel twice before and come back for more. Nicola loves his job; he tells me the ingredients here – in particular the organic meats – are among the finest anywhere. This morning, though, the world of work seems far away. We are bound for a day of island-hopping, swimming, snorkeling and good food and drink in glorious weather, which I’m informed is standard for New Caledonia.

The outing began at 9am when Captain Cyrille Cottica and his skipper welcomed us aboard the 13-metre Persée – gleaming white with red accents – at Noumea’s Port Brunelet. The pair are friendly and relaxed, and the latter really knows his way around a French press. He prepared coffee and large fresh-baked chocolate croissants for us to enjoy on the deck while Cyrille charted a course towards our first stop: Îlot Signal, 8.1 nautical miles away.

New Caledonia comprises hundreds of islands and islets with pristine white-sand beaches facing a phenomenal 24,000 km² lagoon, 15,000 km² of which is World Heritage listed. Lying opposite Dumbea Passage, the tiny Signal – French for “marker” – was long ago chosen as a sea-mark for vessels heading for Noumea. A tall coral limestone column still stands there.

After a short journey we arrive, weigh anchor and take a motorboat to the islet.

It is a family-friendly idyll: groups of adults chat on the sand while children skip under the trees or do handstands and cartwheels in the shallows. Cyrille guides us through the dry woodland. The ground is thorny in places and we didn’t bring our shoes, but the sand is soft and fine like cake flour. A stiff and constant breeze greets us as we exit the scrub onto the beach, where driftwood, pale shells and the bleached bones of coral make a carpet underfoot. Large nests sit on the bare branches of trees, and birds are everywhere; Cyrille points out the Sterne huppée (greater crested tern), Sterne diamant (black-naped tern) and large white egret. Seagulls and a flock of Noddi noir, a black seabird, crowd the wooden jetty. He shows us a striped sea snake curled in a hole in the sand and picks some salty leaves of pourpier (purslane) for us to try; we’re told it’s good for salads.

Cyrille is from Vosges in France, in the mountains near the German border. He’s worked on sailboats in New Caledonia for nine years and has no plans to leave. “It’s a very good life,” he says, gesturing around. I see what he means.

After our walk it’s time to hit the water. I’ve found the ocean temperature in New Caledonia to be reliably delightful. Snorkel in place, I encounter clouds of tiny silver fish moving in unison, and my first starfish (bright orange with black rings).

After our swim we drip-dry in the sunshine on the Persée. Cyrille offers us bottles of Havannah, a Caledonian amber ale. My limbs are thrumming happily. This is pure relaxation: the feeling you get after vigorous exercise, or a really good massage.

Our second and final stop will be Île Larégnère, but first, lunch. We sit down to generous plates of fresh, tender tuna tartare with a salad of lettuce, tomato, cucumber, boiled egg, onion and sesame seeds. It’s dressed in zingy vinaigrette with a squeeze of lime. The meal is tasty and light but filling, and I’m impressed that it came out of such a tiny kitchen. “We have good jobs!” the skipper says with a laugh. For dessert there’s a glossy tart topped with island fresh apricot, grapes, apple, raspberry, kiwi fruit, banana and cream. I am stuffed, but manage a bite. The fruit is a sensational counterpoint to the buttery pastry.

Cyrille brings out wildlife books and tells us about the animals we can expect to encounter around Larégnère. “It’s very good for white pointers, blacktip sharks, and turtles,” he says. “They sleep in the nests on the reef. You can see.” He lies his head on his hand like a turtle at rest.

Later, we are anchored near the pretty little island in the late-afternoon light. My fellow travellers opt to sun themselves on the deck but I can’t resist one last swim. Back in the welcoming waters of the reef, I spy a blue-striped fish and decide he will be my unwitting guide for today’s final stint of aquatic voyeurism. He darts around the vivid coral, leading us towards the reef’s edge. I really want to spot a turtle before my time is up. Almost immediately, I see a distinctive shape near the sandy sea floor: a large turtle is flapping its flippers just a few metres away from me. It is soon joined by two more and they swim together gracefully.

I follow them until I remember the waiting boat. I tread water and watch as the trio disappears into the haze. The cruise back to the mainland will be sun-drenched, lazy and lovely but, right now, I am content. In this moment, I am buoyant. Another standard for New Caledonia it seems.

Here are some more ways to make a splash in New Caledonia.

The Lindéraliques are dramatic, towering black karstic limestone rocks jutting out of the ocean off Hienghène, on the east coast of Grand Terre’s Northern Province. The sole example of this kind of rock in New Caledonia, their appearance here is a mystery. The Sphinx and the Poule Couveuse (Broody Hen) – marvellous formations with tribal significance – in particular have become beloved national symbols. Check them out via single or double kayak on a tour with Nord Adventure.

The beautiful Îlot Hienga, also off the coast of Hienghène, is half nature reserve, half fisherman’s hot spot and all South Pacific islet paradise. On one of Babou Côté Ocean’s half-day trips you can take a one-hour walk around the islet to see the lush vegetation, much of which has been used as medicine or food by tribespeople. There’s even more to discover underwater, though: grab your snorkel to see brilliant butterflyfish, angelfish and Moorish idols. There are also exceptional scuba diving experiences in the area.

A glass-bottom boat ride in Bourail, on Grand Terre’s west coast, is the perfect way to explore the lagoon without even having to put your swimmers on. The crystal-clear waters here are home to colourful coral gardens teeming with marine life, and you’ll have a front-row seat when green turtles and rays swim right under the boat. If you do decide to take a dip, look out for the local colony of clownfish, who snuggle into finger coral in one of the cutest examples of symbiosis you’ll see anywhere.