The ultimate Tahiti itinerary for the starry-eyed traveller 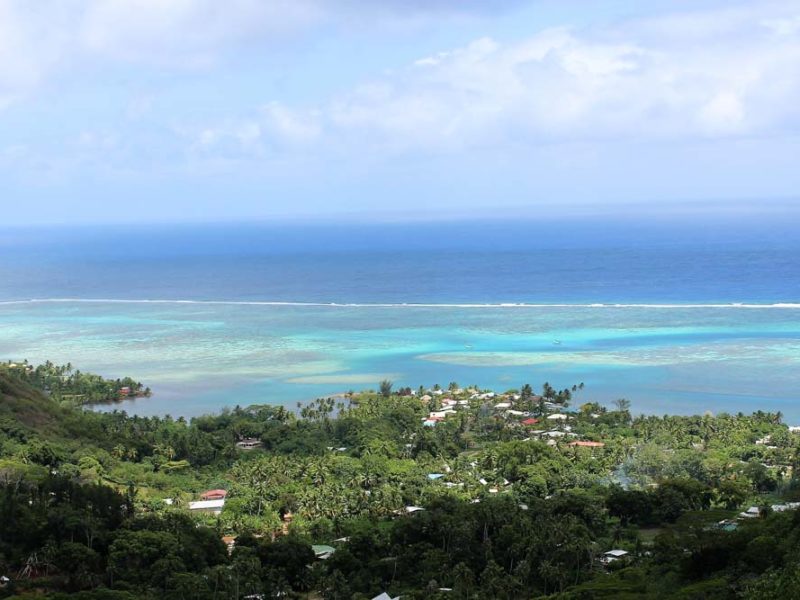 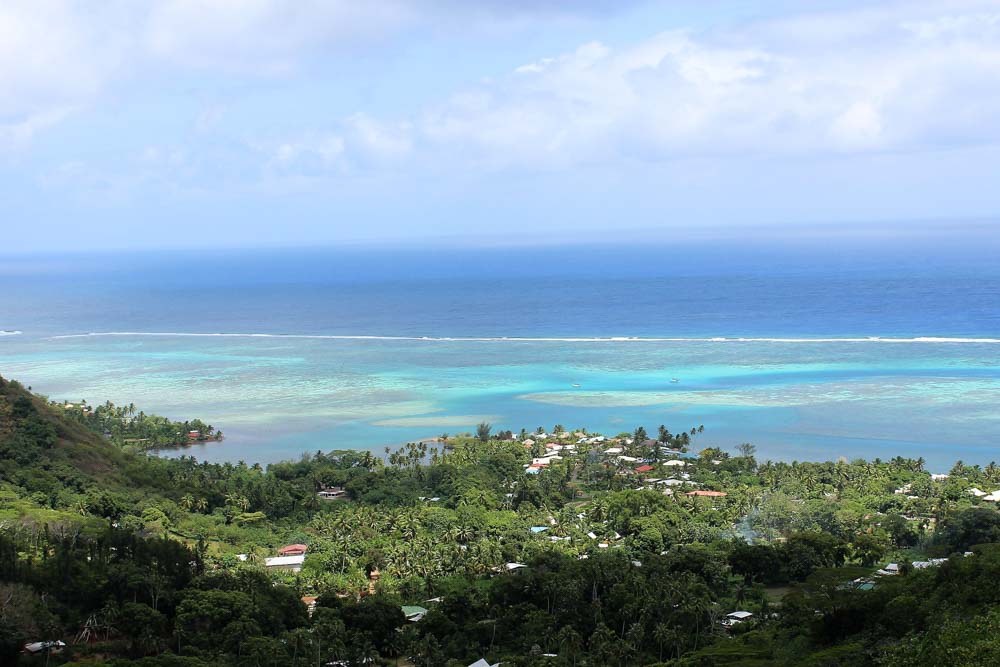 The magical view out to sea from Magic Mountain (photo: Leigh-Ann Pow).

There’s a portion of the Pacific where stereotypes are inadequate; where the water is bluer than can be described and the sand whiter than white. Words by Leigh-Ann Pow.

There’s a fundamental problem with fantasies. They are just so hard to live up to. Take somewhere like Tahiti for example. There are myriad stereotypes attached to this cluster of islands floating in the South Pacific.

It’s a paradise on Earth of pure white sandy beaches and bluer than blue waters; it is filled with golden-skinned locals wearing fragrant tropical flowers behind their ears; it’s a fecund oasis groaning with fish and pineapples and mangoes and coconuts. You get the picture.

Given the chance to experience it for myself, I was prepared to be disappointed (devastated even) by the reality. Nowhere could be that idyllic, that otherworldly perfect.

Except that maybe it could.

Its not a quick trip to Tahiti, but it’s worth it.

It takes an investment of time to get to Tahiti, the cluster of islands that collectively makes up French Polynesia (to give it its official name), including Tahiti itself, Bora Bora, Moorea, Huahine, Raiatea, Taha’a, and Rangiroa (there are actually 118 islands in total, of which 40 are more or less populated).

You first need to fly three hours to Auckland, followed by a five-hour flight on Air Tahiti Nui over the International Date Line into Papeete, the capital. By the time I land, effectively a day before I departed thanks to the date line crossing, the inky black of late evening obscures the island scenery outside the window.

But the humid air that hugs me as I step off the plane, and the ubiquitous lei of fragrant local flowers that is draped around my neck by my gracious, smiling greeting party, assuage my craving for a stereotypical tropical arrival.

Waking the next day I take in the water views beyond my hotel balcony, fill my lungs with humid air and listen to the sound of early morning bird song. I still haven’t reached my ultimate destination – the island of Moorea, 17 kilometres west of Tahiti – but this is a pretty impressive pit-stop on the way.

A few hours later I am at the ferry port, preparing to make the 30-minute journey to Moorea, which can be glimpsed, hazy and green on the horizon. As the hulking boat heads out through a channel in the reef that surrounds much of the island, I get my first real glimpse of blue water. I am a huge fan of blue, being a water sign myself, but this blue really does take my breath away momentarily. It is so deep, so lush, so unlike anything I imagined existed in nature.

Moorea is truly a little slice of heaven on earth

The port on Moorea is a bustling little proposition of smiling, raven-haired locals (many with flowers tucked behind their ears, and intricate traditional body art decorating their limbs) and visitors. It takes just a few minutes until I am on the road to the Sofitel Moorea Ia Ora Beach Resort Hotel, my base for the next few days.

As I take in the scene outside the bus window, I see neat little houses lining the road, many of their gardens abundant with flowering bushes and fruit trees groaning under the weight of seductively ripe mangoes and papaya. Dogs laze on lawns, stupefied by the midday heat. This gentle panorama of domesticity is contrasted against the dense green mountains that reach a peak in the middle of the island.

There are roughly 18,000 people living on Moorea, made up largely of Polynesians, with some French ex-pats and Chinese. The hotel is an oasis of island chic melded with a French sensibility.

There is a mix of thatched garden, lagoon-view and over-water bungalows (a prerequisite in these parts and another delightful stereotype that more than lives up to the hype), all of which are sleek and spacious and offer up lovely views. I stay inside only long enough to drop my bags and pull on my swimmers; the focus here is outside not inside.

The rest of the afternoon is spent reclining on white sand in the perfect shadow of a palm tree, occasionally dipping into the shallow aqua blue waters that lap gently on the shore, the ferocity of the ocean dissipated by the reef that can be seen just under the horizon in the distance, a thin, silent line of white seafoam.

What to do when it rains in Tahiti: swim with sharks and stingrays

The next morning, after a breakfast of pineapple and mango, with a zingy fresh juice shot to add extra energy for the day ahead, I head off through a low, ominous cloud haze to take a boat trip to swim with sharks and stingrays, and eventually wash up on an uninhabited motu for lunch.

The rain is pelting through the open sides of the boat as we head out with the jovial local guide Siki offering a prayer to the gods for clear skies to come.

I’m not completely convinced, but half an hour later the rain clears and the sun starts to cast irresistible patterns on the water. The colour shifts and changes according to the topography of the lagoon: the deeper the water, the deeper the blue.

Siki keeps up a constant and entertaining narrative of jokes and local knowledge as we forge ahead. When we eventually come to a stop, the water is shallow and clear, all the better to see the stingrays and sleek, blacktip reef sharks just below the surface. Lowering myself into the water goes against everything I have been taught about avoiding close quarters contact with sharks, but Siki does this every other day and he still has all his digits intact.

Stingrays glide under my feet, while the sharks keep a respectful distance, as wary of us as we are of them. Before too long we are powering forward again, coming to a stop off a small island apparently populated only by chickens and a loan ginger cat. As Siki and his crew set up a beach picnic, I comb the sand for shells and bleached white coral.

Lunch affords me my first opportunity to taste the local specialty of Tahiti, poisson cru. Siki shows us his method of creation – everyone has their favourite way of constructing the dish, he tells us – washing the raw red tuna in salted water, adding ample lime juice to cure the fish and squeezing coconut milk from freshly desiccated flesh. The result is unctuous, fresh and flavoursome.

The journey back to our hotel is languid and restful, watching the scenery drift by and the light change as the sun starts its slow descent into afternoon.

Back at the resort I gravitate back to the beach, followed by dinner in K restaurant, the delicious fine dining option where my meal is accompanied by graceful dancers softly telling time-honoured tales with their hands against the backdrop of Tahiti, which twinkles and sparkles in the distance.

Having concentrated my attention solely on the water for days, it is time to venture into the green heart of the island’s interior to get a more well-rounded feel for the place. This journey is undertaken with another tour guide heavy on cheeky humour and local facts.

Francky Franck is a French ex-pat who first came to Tahiti during his time in the French army (the other choices were Algeria or Africa), and returned to live permanently here 12 years ago.

He takes us to a tropical farm high up on a hillside, where he explains the health-giving benefits of the fruits grown there, and tells us about the labour intensive pollination process required to produce the vanilla beans (it’s done by hand, which is why they are so expensive).

After this we bump our way up Magic Mountain, a vertiginous climb that eventually affords stunning views of the lagoon and reef below. We finish with a drive through one of the island’s many pineapple plantations.

The whole expedition takes just a few hours – Moorea is only 134 square kilometres in all, but the scenery is picture perfect, an unspoilt tropical ideal. I only realise why later: there are no overhead powerlines on Moorea blighting the views and spoiling the simpler-times mystique of the island. Powerlines are buried underground (a benefit of the government money coming in from France), and even the mobile phone towers are hidden, delightfully disguised as palm trees.

My last morning on Moorea is spent in the water again, this time snorkelling with sea scooters just shy of the reef with a member of the Sofitel’s aquatic centre team. While the water surface is choppy given the close proximity to the might of the Pacific Ocean, below the surface is a peaceful, slow-motion world of kaleidoscopic fish and coral.

The journey back to the beach should take less than an hour, but there is so much to wonder at that time becomes irrelevant. Wading from the warm waters onto the hot sand, I have seen another fantasy shifted into reality. I now know that there are places on earth that are totally idyllic and otherworldly perfect, and Moorea is one of them.

The details: Tahiti and Moorea

Staying there:  Sofitel Moorea Ia Ora Beach Resort Hotel is a five-star tropical haven with a French heart, including an annual festival of cheese that sees around 400 kilograms and 130 varieties flown in from France!

For bookings and further information, visit Tahiti Tourisme at tahititourisme.com.au.

Around the World on a Private Qantas 747

Visit 6 fascinating destinations in 18 days travelling aboard a privately chartered Qantas 747. Fully inclusive once in a lifetime trip.

Around the World on a Private Qantas 747

Visit 6 fascinating destinations in 18 days travelling aboard a privately chartered Qantas 747. Fully inclusive once in a lifetime trip.

Five amazing Tahitian islands you need to know about

The Islands of Tahiti are where paradisiacal stereotypes are met and exceeded, and the best way to see it all is by island-hopping across this collec...

Why you need to visit Huahine, French Polynesia – now

Welcome to South Pacific gem, Huahine in French Polynesia. Where is it and how to get there Huahine is approximately 180 kilometres north-west of Ta...

Eight things we didn’t expect from Tahiti, but absolutely love

Tahiti might be known as a honeymooner’s paradise, but there’s plenty more to French Polynesia than overwater bungalows and celebrity sightings......