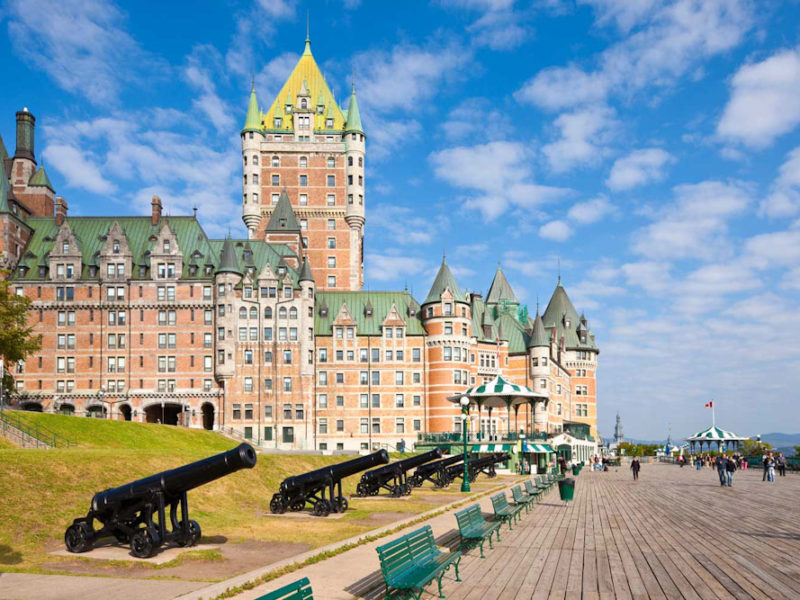 Chateau Frontenac overlooks the Terrasse Dufferin, a lovely terrace for pedestrians to stroll along with views of the Lawrence River.

With fortified walls, cobblestone streets and a fairytale chateau overlooking it all, Quebec City is like a slice of Europe on the banks of the mighty St. Lawrence River; this is our Undiscovered Quebec City Guide. By Adam Bisby.

Few vistas in North America can compare to that of the Chateau Frontenac towering over the parks, gardens, ancient stone fortifications and cobblestone squares of the Old City.

There’s no shortage of style here, either: The quartier Petit Champlain is filled with boutiques that would feel right at home in Paris, Rue Saint-Paul is famous for its antique shops, and Rue du Trésor hosts an open-air art gallery.

Then there’s the world’s third-largest pre-Lent extravaganza, the Quebec Winter Carnival, which puts a unique snowy spin on revelry that rivals that in Rio or New Orleans.

With so much to keep visitors busy in Old Quebec’s core, you don’t have to stroll far to feel like you’re off the beaten track.

Take Le Domaine de Maizerets: The spacious, pretty park on the north side of the St. Charles River offers 11 kilometres of walking, snowshoeing and cross-country ski trails, as well as a lush arboretum and the Château Ango des Maizerets, a 16th-century mansion built by the French.

Yet it’s rarely, if ever, crowded.

Likewise, with history hogging the spotlight, more modern diversions tend to get overshadowed.

A prime example is the Quebec Fine Arts Museum. Despite the fact that it’s located smack dab in the middle of the Plains of Abraham – more on that shortly – the newly enlarged celebration of Quebecois creativity often offers a quiet, contemplative escape from the hustle and bustle surrounding the Chateau.

Perched above Lower Town next to the Chateau Frontenac, this expansive pedestrian promenade provides peerless views of the St. Lawrence River and its opposite bank.

In summer, street performers strum and juggle around its ornate black and white pavilions, while in winter it provides the pushing-off point for a toboggan ride like no other. (Read on for more on that.)

One of the most telling twist in Canadian history took place on September 13, 1759, when British troops commanded by General James Wolfe defeated French forces on the rolling expanse of pastureland known as the Plains of Abraham.

These days, the plains are part of Battlefields Park, which also encompasses an interpretive centre, dozens of historic artillery pieces, and three brooding Martello towers.

The site’s allure, however, isn’t just historic, as it hosts outdoor concerts and festivals galore. ccbn-nbc.gc.ca

North America’s only fortified city north of Mexico is home to centuries-old walls, gates and ramparts that stretch for nearly five kilometres.

Guided tours of the fortifications explore the city’s intricate defence system and offer a unique soldier’s-eye view of town.

Most visitors only ever see the neighbouring city of Levis from a distance, but a regular car ferry makes the trip across the St. Lawrence, providing superb views of the rocky Diamond Cape upon which the Chateau Frontenac sits.

With its home province being the world’s largest producer of maple syrup, it’s hardly surprising that many local restaurants incorporate the sweet sap into their menus.

To sample this sugary goodness at the source, head to one of the many Sugar Shacks in the area, such as the Cabane à Sucre Leclerc and the Érablière du Lac-Beauport (read more about sugar shacks here).

Just west of the Old City, the ultra-modern Aquarium du Québec features more than 10,000 species of mammal, reptile, fish and other aquatic fauna native to North America and the Arctic.

Highlights include the polar bears and seals in the Arctic enclosures – safely separated, of course – as well as the enormous ‘Ocean’ basin visitors can admire from underneath.

It takes a truly adventurous soul to spend the night atop a slab of ice.

A three-lane toboggan chute has descended the Terrasse Dufferin since the winter of 1884. Riders reach speeds of up to 70 kilometres per hour as they hurtle down solo or in groups of two to four.

Located in the fortified Place D’Youville, the Palais Montcalm concert hall is famous for its world-class acoustics and Casavant organ, as well as for eclectic programming that includes everything from classical and jazz to world music, blues and folk.

Lower Town is just that: set at the base of the Diamond Cape, this historic district is linked to the Terrasse Dufferin above, via a short funicular railway.

With the bustling Place Royale at its heart, Lower Town unabashedly embraces its French roots, with bustling bistros lining the cobblestone streets and ornate churches like Notre-Dame-des-Victoires rising over the rooftops.

On the opposite side of the Cape, the neighbouring districts of Saint-Jean-Baptiste and Saint-Roch are famous among foodies, shoppers and visitors looking for cocktails and dancing after dark.

Canada’s most recognisable mascot, the Bonhomme de Neige, gets the Quebec Winter Carnival started with an exuberant parade each February, and the city follows suit with everything from dogsled and canoe races across the icy St. Lawrence to group snow baths and pancake breakfasts.

Quebec City regularly appears on global top-10 Christmas destination lists, with the Chateau Frontenac draped in lights and garland every cobblestone street decked out in its holiday best.

There are also dozens of concerts and parades, as well as a German-themed Christmas Fair selling crafts and holiday cuisine.

What do you get when you take a dramatic stretch of the St. Lawrence River’s north shore, rugged mountains that are part of a World Biosphere Reserve, and add $350 million in tourism investment?

Cirque du Soleil co-founder Daniel Gauthier has made it his dream to turn the Charlevoix region north-east of Quebec City into a tourism hot spot, and so far, so good.

There’s a foodie-friendly railway to the base of Le Massif ski resort and beyond, the riverside Casino de Charlevoix, and the spa treatments, top-tier golf and general sumptuousness of the neighbouring Fairmont Le Manoir Richelieu resort.

Family: Hotel Universel – Located in the suburb of St. Foy, this modern property features a tropical-themed indoor pool and spa.

Corsaire microbrewery: Follow up a ferry trip to Levis with a flight of beer and an overflowing charcuterie board.

Bachir: Diners seeking a break from the ubiquitous French fare will love Lebanese dishes like shish tawook and house-made baklava. 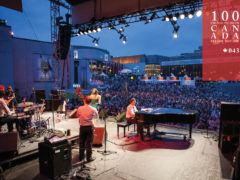 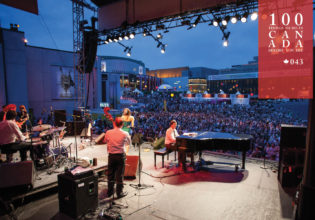 Become a hep cat at one of the world's greatest music festivals. Here’s what you need out of a vacation: meet new people, experience new things and... 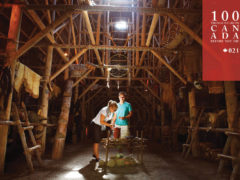 Go back in time with the First People in a traditional Canadian longhouse. (more…)...

The world's second-largest French-speaking city is No. 1 when it comes to fun, thanks to the vibrant club and dining scenes, and its well-earned statu... 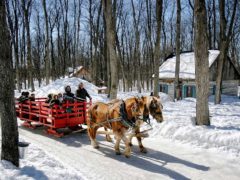 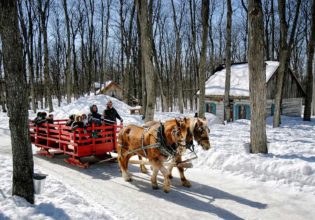