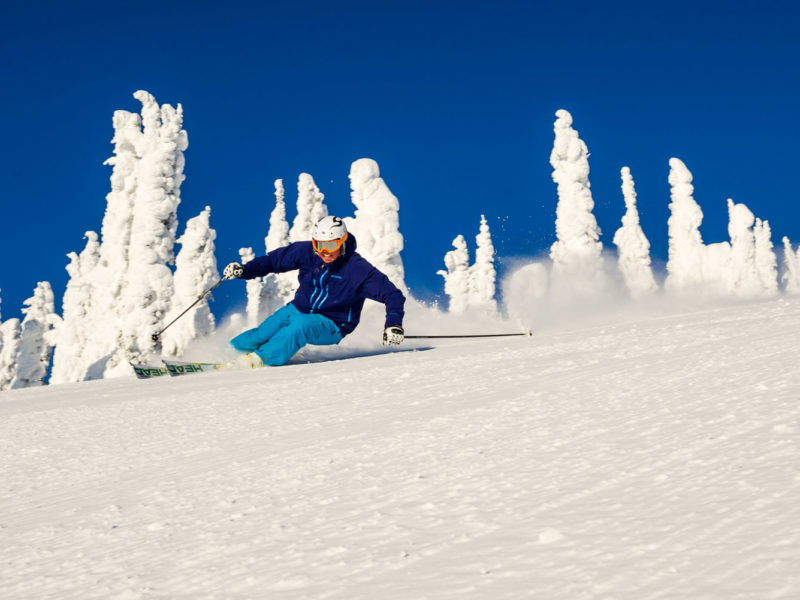 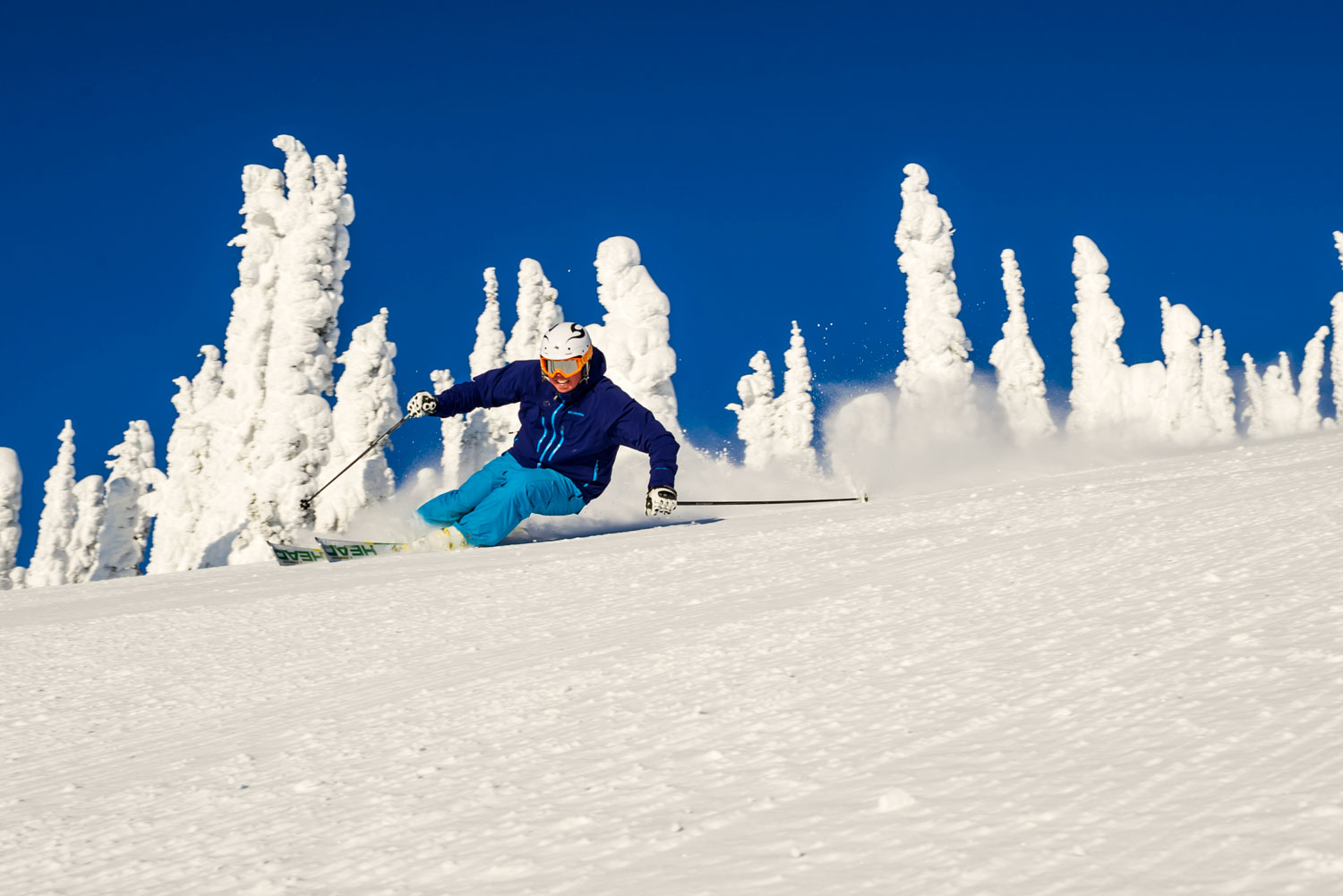 Skiing the Snow Ghosts at Big White. By Andrew Jay

Mix mountains of snow with thousands of slopeside condos, abundant child-friendly amenities and a superb ski school, and you’ve got a recipe for ski-holiday success.

This resort’s tagline – “It’s the Snow” – only tells part of the story. Granted, it’s a very significant part: Big White Mountain, the highest summit of British Columbia’s rolling Okanagan Highland, receives an average of nearly eight metres of snow each year, with the 2015–16 season topping 10 metres.

This isn’t just any snow, mind you. This is the Okanagan region’s famously fluffy champagne powder, which locals call ‘hero snow’ because it turns beginners into superstars.

Indeed, many hills would be content to rest on laurels as snowy as these, but not Big White. With beds for 17,000-plus guests, it offers more ski-in/ski-out lodging than any other mountain resort in Canada.

The ski and snowboard school is world class, resort amenities are smart and tasteful, and the 15 lifts serve 145 trails that encompass every type of terrain imaginable.

Then, when the sun sets, Western Canada’s largest expanse of night-skiing takes over, with more illuminated vertical than anywhere in North America.

Jerry Seinfeld once quipped that “there’s no such thing as fun for the whole family”, which goes to show that the comedian had never been to Big White.

This is a family mountain first and foremost, with everything from the steep, cliff-ringed Parachute Bowl to cruisy powder-choked glades for mum and dad, an expansive (and selfie-friendly) terrain park for teens, and cartoon-themed runs for the little ones.

As for something the entire brood will appreciate, the ski school’s ‘door-to-ski’ shuttle service collects young pupils in the morning and drops them off in the afternoon. Bet you can taste that leisurely, uninterrupted coffee already.

1. Take the Alpine T-bar to check out the otherworldly ‘snow ghosts’ that haunt the gentle uppermost sections of Big White’s two peaks. These fantastic figures are actually the snow-encrusted tops of evergreen trees.

2. Ski the Ogopogo. This new trail is littered with colourful gates that mimic the serpentine body of the Okanagan’s mythical lake creature for which the run is named. The intermediate tree run is also great fun for adults – just don’t be surprised when Junior boasts about getting to the tail first.

3. Sample Tabletop S’mores at the Globe Cafe and Tapas Bar: toast giant marshmallows on a table-top fire pit, dip them in rich chocolate ganache, and then sandwich the lot between graham crackers for a decadent DIY dessert.

Local secrets you should know

Seeing it for yourself always trumps just hearing about it, so why not have a local show you around the slopes?

If your idea of a winter wonderland involves sleigh bells and snuggling under blankets, two unique dining packages fit the bill. Both begin in a sleigh pulled by a pair of Clydesdale horses.

Beyond skiing and boarding, there are plenty of thrilling ways to earn that sleigh-ride feast. A case in point is the 18-metre ice-climbing tower in Happy Valley Adventure Park, where you can also go tubing and ice skating.

Then again, do you really need a reason to pamper yourself? You’ve earned this holiday, so you might want to make the luxurious Elevation Village Spa your first stop. Two village locations offer treatments including massages, facials and nail care.

Big White’s family focus means it is relatively quiet after the sun sets.

For fantastic views of those sunsets – not to mention the best grown-up hot chocolate anywhere – head to the enormous patio at Sessions Taphouse & Grill, which is just off the aptly named Perfection run.

There are exceptions to the mellow vibe. Take Snowshoe Sam’s; repeatedly touted by the ski media as one of North America’s best resort bars, it hosts DJs and live bands, and is famous for its flaming “Gunbarrel Coffee” that’s poured down the barrel of an antique shotgun.

Most named trails are flanked by meticulously thinned wooded slopes that deliver some of the best, and most forgiving, glade skiing on Earth.

There’s no better way for intermediates to take their skills into the snowy greenery.

With a six-person chairlift and a quadruple one both serving the main village, and with the 13 other lifts bringing Big White’s total uphill capacity to 28,000 schussers per hour, getting up to the sublime Flagpole Glades is as effortless as gliding through them on a powder day.

Slopeside kitchenette and loft rooms with essential ski amenities such as an outdoor hot tub and equipment storage.

Multilevel condos are just steps from the slopes and the village centre.
All units feature gas fireplaces, private hot tubs and heated garages.

Head to our extensive guide to exploring Canada.