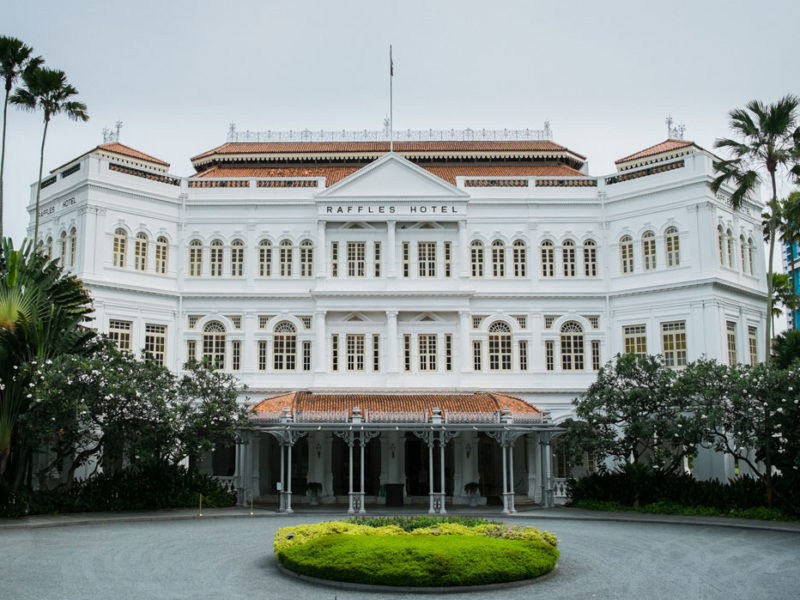 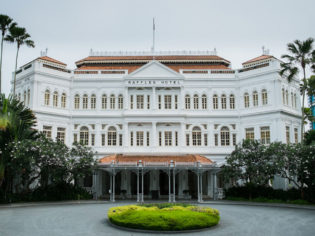 One of the world’s key transit hubs – and an interesting place to visit in itself – Singapore offers a huge array of choices in terms of resorts, hotels and guest houses to stay.

Here’s our list of the top 10 hotels in Singapore (in no particular order) to make choosing your next stay in this eclectic city-state a breeze.”

An icon of the island city state, this grand old dame has undergone a multi-million dollar refurbishment that has made it even more sparkly and luxurious than before. 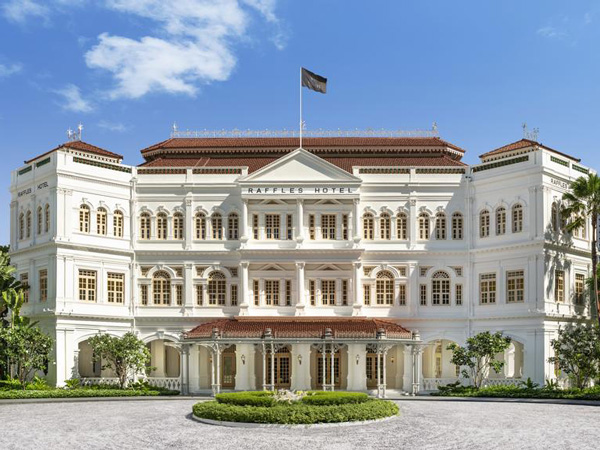 This 49-room boutique hotel represents the Asian wellness brand’s first urban property, but there is no compromise in style or focus.

Made up of a row of heritage shop houses in the bustling Duxton neighbourhood, the décor throughout comes courtesy of London-based designer Anouska Hempel, whose eclectic style runs riot here, with antique opium beds in suites, vintage Bakelite phones, pops of yellow throughout and the luminous Pearl Suite, rendered in crisp white, which must keep housekeeping on their toes.

As for wellbeing, there’s a resident Traditional Chinese Medicine physician, morning and evening herbal shots, healthy dining options, organic mattresses, Tibetan singing bowls in every room (and a giant one in the lobby) and a raft of sustainable initiatives and practices. 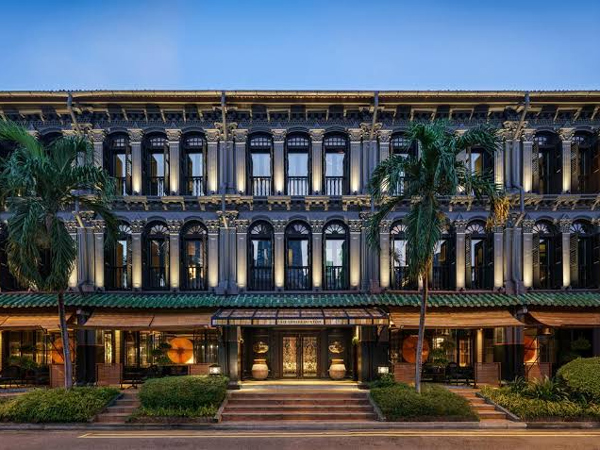 Located in the frenetic Chinatown neighbourhood, this budget boutique hotel is a fun, well-priced accommodation option.

The façade of the row of six shop houses it inhabits sets the tone for the theme throughout, painted as it is in a classic black and white palette.

The lobby has a retro Eero Aarnio ball chair (black and white, of course) built into the wall and a front desk manned by young and knowledgeable staff; upstairs, the rooms are small but very functional, with comfortable beds, complimentary toiletries and yet more black and white decor. There’s no on-site restaurant, but the surrounding streets are filled with dining options. 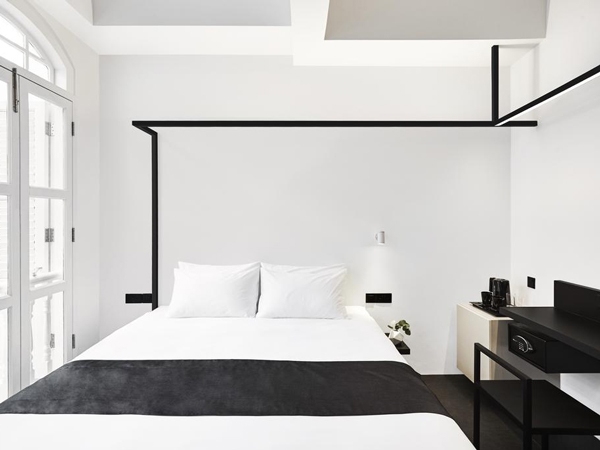 Hotel Mono is designed in a classic black and white palette.

Walking into the lobby of the Conrad Centennial Singapore (past the staggering amount of luxury cars parked outside) can be a little off putting: it’s a bit dated in a ‘too-much-early-90s-marble-and-gold’ kind of way. But rest assured that the property has done the right thing by its guests, spending recent refurbishment budgets on the rooms and suites instead.

Unlike downstairs, these are a study in restive modern Asian style, with lots of clean lines and beige-on-brown hues and clever in-built banquet seating providing ample rest and relax options (something many five star hotels miss the mark on). The floor to ceiling windows flood the space with light during the day and offer up stunning night views of the twinkling lights of the city skyline. 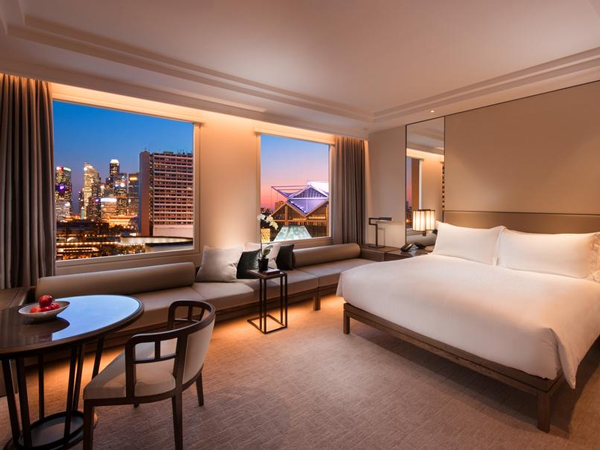 This ultra-luxurious resort on the island of Sentosa has played host to President Donald Trump and North Korea’s Supreme Leader Kim Jong Un, but you definitely shouldn’t hold that against it!

Set in over 12 hectares of lush grounds (complete with roaming peacocks), each of Capella Singapore’s rooms and suites have a sophisticated modern Asian style and come with the kind of touches that push it to next level luxe: Aesop products, private plunge pools, open-air baths, complimentary mini bar.

The Sunday buffet brunch in The Knolls is famous, with locals flocking for the plentiful food (including a desserts table groaning under the weight of fanciful confections) and roaming entertainers. 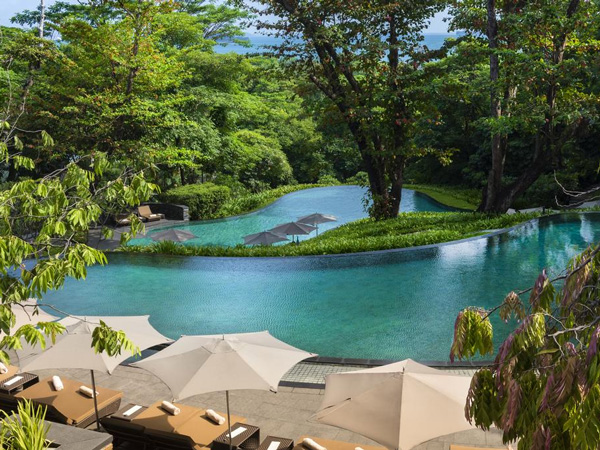 Capella Singapore is a luxury resort on the island of Sentosa.

Sitting on the Singapore River at Robertson Quay, The Warehouse Hotel’s colourful history includes stints as an opium den and a disco before being reinvented as a sleek design hotel.

Occupying three former warehouses built in the late 19th century, entering the lofty lobby from the tropical heat is transformative, as is the delicious hibiscus cordial preferred as a welcome drink.

The discreet front desk is manned by immaculately styled staff and there is a bar, which gets seriously schmoozy after dark, and the excellent Po restaurant serving chef Willin Low’s mod-Sin cuisine. The 37 rooms are a study in understated industrial chic, all muted colours, exposed brick, wood and metal. 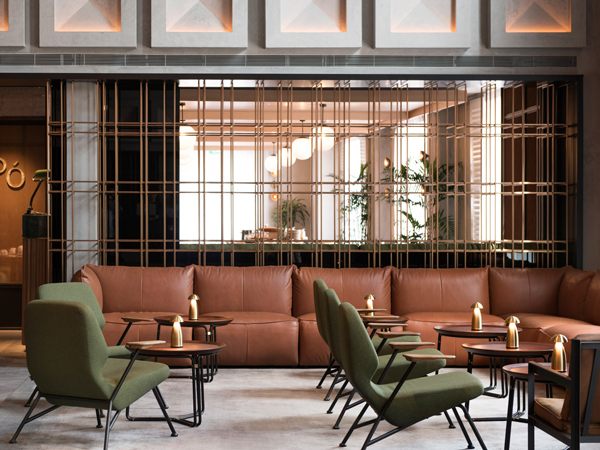 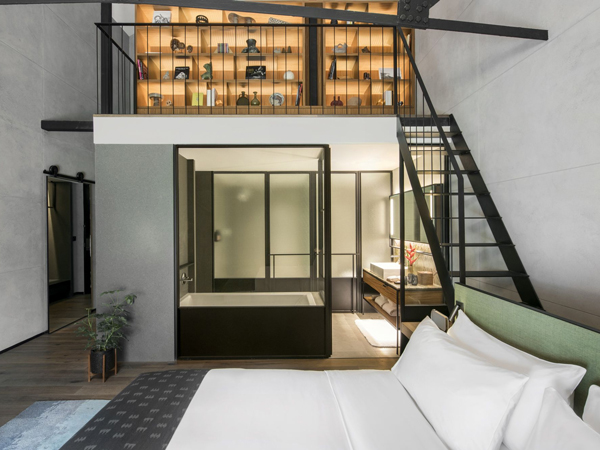 Inside the rooms at The Warehouse Hotel.

The other landmark hotel in town is The Fullerton, with its imposing columns and gracious hospitality.

The former General Post Office was built in the neo-classical style 1923 and gazetted as a national monument in 2015; it offers up 400 rooms and suite which tilt towards elegant rather than edgy, a choice of restaurants and bars and a sexy pool area that is a lot more appealing to lounge in than the headline grabbing (and perpetually packed) pool at the top of Marina Bay Sands. 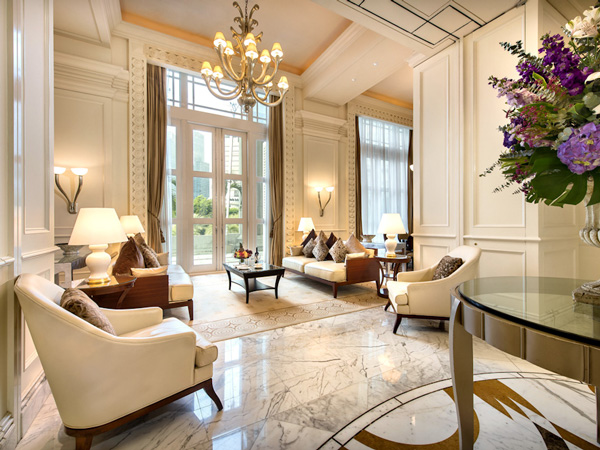 The grand living room of the marble-floored Presidential Suite in the Fullerton Hotel, Singapore.

This 155-room hotel, spread across the neo-classical-style Capital Building (built in 1930, it was once a busy cinema) and the Venetian renaissance Stamford House (circa 1904, formerly a department store), was a long time in the making: the restoration and refurbishment undertaken by Pritzker-prize winning architect Richard Meier took years.

Now finished and fabulous, the space has a sophisticated feel, with the stylish rooms melding contemporary décor with heritage features and the public areas like The Bar at 15 Stamford possessing a sexy, club-like feel with lots of butter-soft leather banquets and low, moody lighting.

Whether you choose to stay or not, book a table at 15 Stamford by Alvin Leung; the blue-haired, three Michelin-starred chef’s flavours are as exuberant as he is (the day we encounter him he is wearing high top sneakers covered in vicious metal studs). 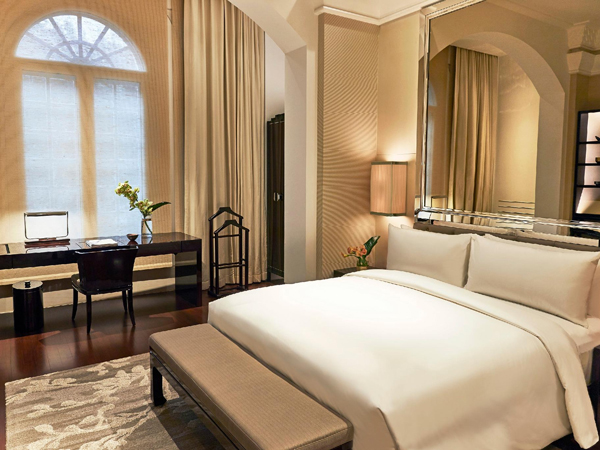 Singapore prides itself on being a city within a garden, and the arresting Parkroyal at Pickering is a perfect example of how architecture is embracing this principle.

Designed by Singapore-based firm WOHA Architects, which is known for incorporating greenery into its building designs, the exterior of this hotel within a garden is a curvaceous series of layered sky gardens spilling over with lush tropical plants, flowers and palm trees that link the low rise glass and metal towers housing the 367 rooms and suites.

The design reaches its zenith at the fifth floor where a tropical oasis of plantings engulf the infinity pool and pod-like cabanas. 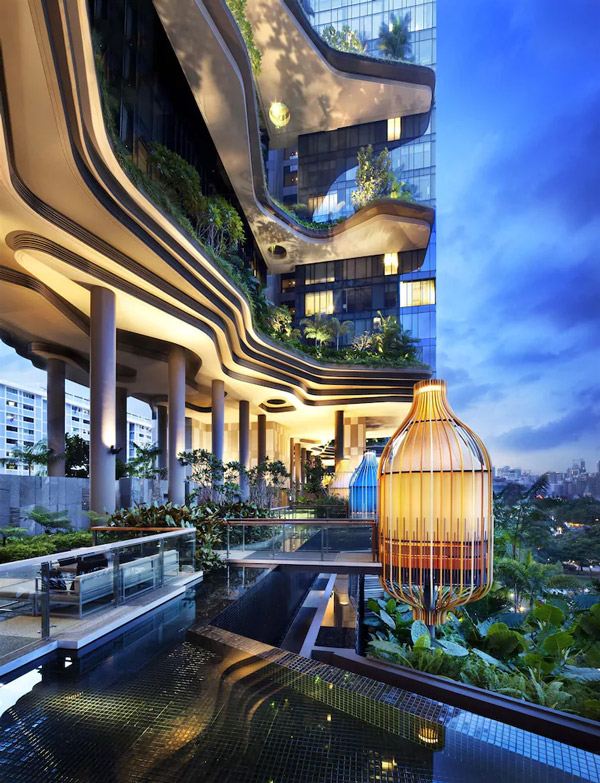 A tropical oasis of plantings engulf the infinity pool and pod-like cabanas at the Parkroyal on Pickering.

The neighbourhood of Katong is slightly removed from the hustle and bustle, but it makes up for lack of proximity with local charm.

The Indigo brand is all about tapping into the local vibe of its location, and here that means lots of references to the colourful Peranakan traditions and architecture that still proliferate in the area.

The hotel incorporates the old Joo Chiat Police Station (now the site of the hotel’s restaurant, Baba Chews), as well as a new build tower that houses 131 rooms, which are decorated with exuberant splashes of colour, patterned tiles and wall murals of local street scenes.

The showers in the bathrooms look out through floor to ceiling windows that offer up views across the tightly packed terracotta-tiled rooftops while you are working up a lather; shrinking violets can get the same outlook from the rooftop infinity pool.

Cute touches like finding traditional sweets and children’s games in the rooms and illustrated maps of neighbourhood walks at reception make this a charming stay. 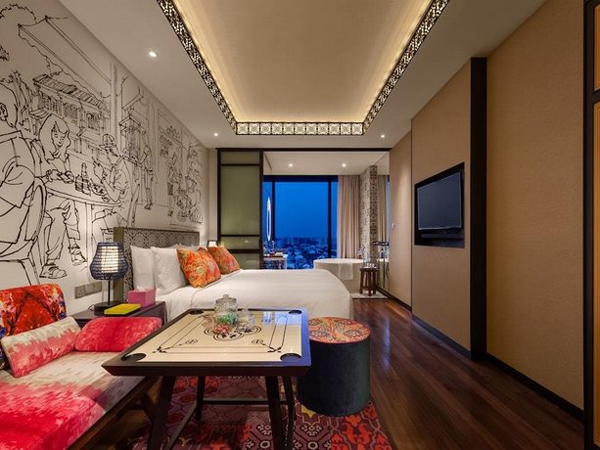 Hotel Indigo Singapore Katong captures the local vibe of its location in its design.

For more travel tips read our guide to Singapore here. 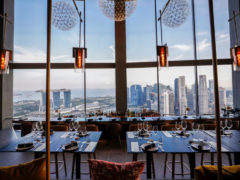 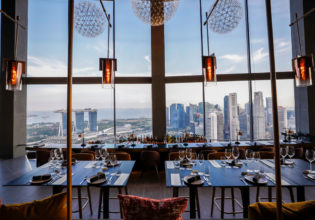 Swissôtel: A Swiss touch in the tropics

The lush, tropical sophistication of Singapore may feel a lifetime away from chic Swiss luxury and warm hospitality, but when they all come together, ... 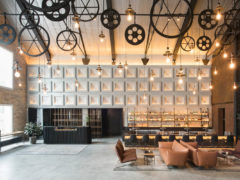 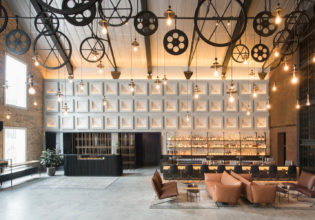 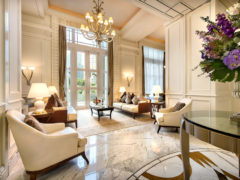 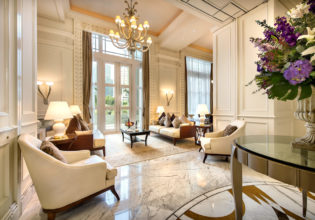 Behind the Fullerton Hotel's stately edifice, there is more to this Singapore icon than  just stylish rooms, exceptional food and a convenient locati... 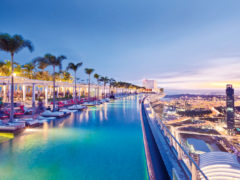 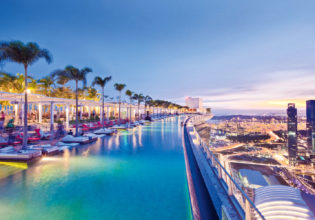 Marina Bay Sands in Singapore was voted as having the best hotel pool in International Traveller's Readers' Choice Awards 2015. (more…)...