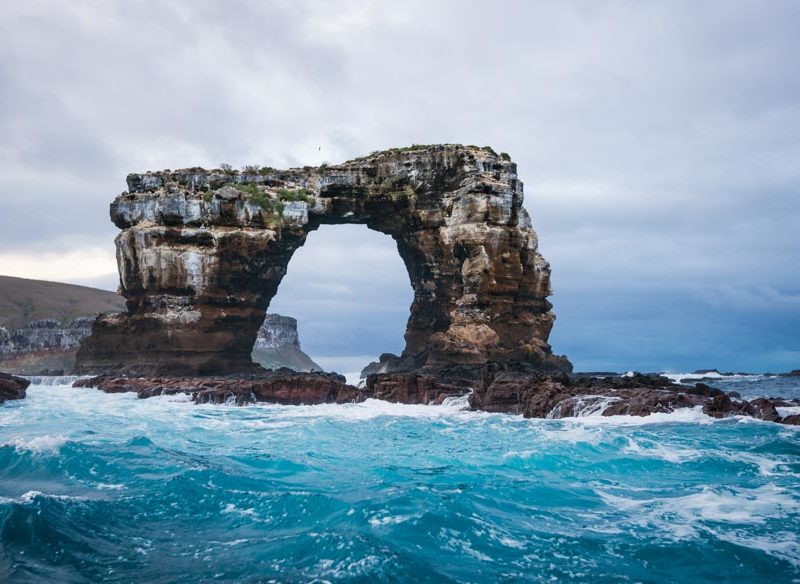 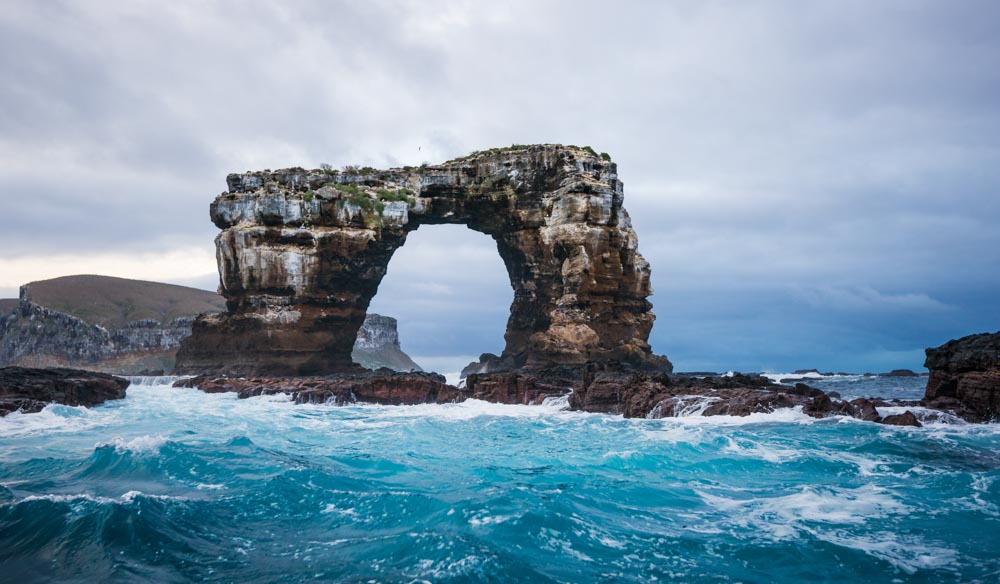 Darwin's Arch is hit by waves; in the distance lies Darwin island, named after Charles Darwin and among the smallest in the Galapagos archipelago.

Leave the bucket-list brigade far behind on a boat trip through the mesmerising Galapagos Islands.

They’re here. But then, I knew they would be. There’s your number one problem with a bucket-list destination, right there: bucket-list travellers. They’re like moths to a flame.

They’re crowding me now at San Cristobal airport, their cameras knocking me in my solar plexus, hydration hoses dangling from their brand-spanking-new Kathmandu backpacks, flicking my arms like hungry mosquitoes. They’re a water-resistant, lightweight Gore-Tex army. 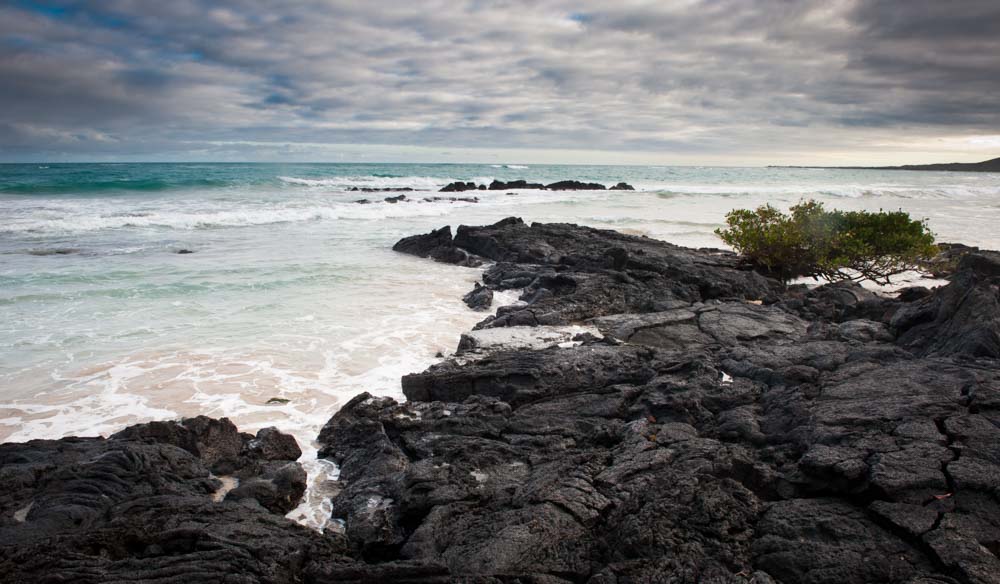 The jagged volcanic landscape of the Galapagos.

They talk loudly too, but then there’s so much to tell. Anticipation is heavy in the air, like humidity. After all, just on the other side of the immigration man with the Inspector Clouseau moustache, there’s a world of crazy-looking animals created, surely, with Instagram in mind.

A flotilla of tourist boats – more than half the visitors to the Galapagos will travel by boat at some stage of their journey – will ensure cyberspace records another bucket-list inclusion being ticked efficiently off the list. Done! 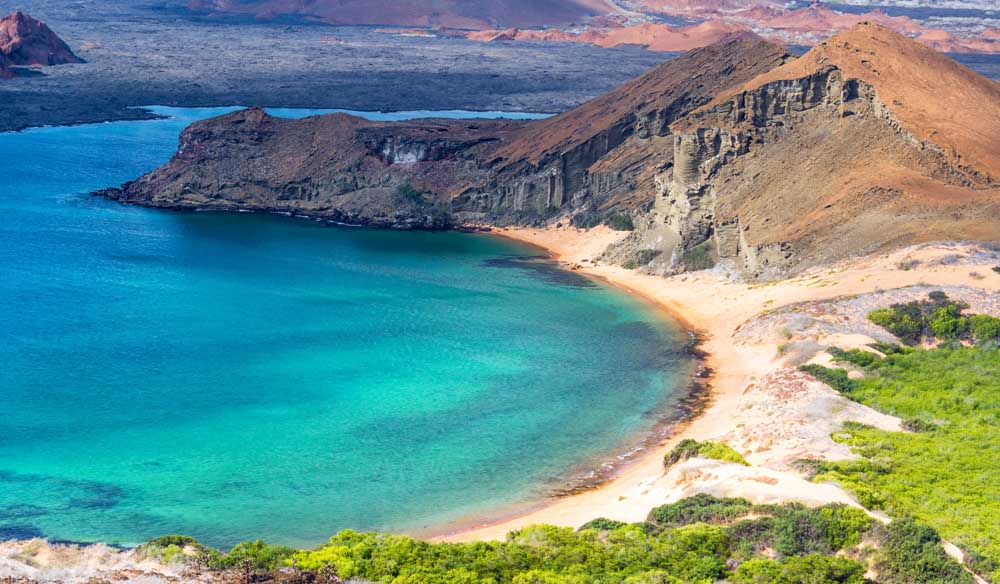 But this is not my first rodeo. Bucket-list destinations, I’ve discovered through trial and error, must be approached with a very carefully planned strategy. You want them to live up to all the hype, don’t you? Who wants to be a witness to a deity worshipped half to death? 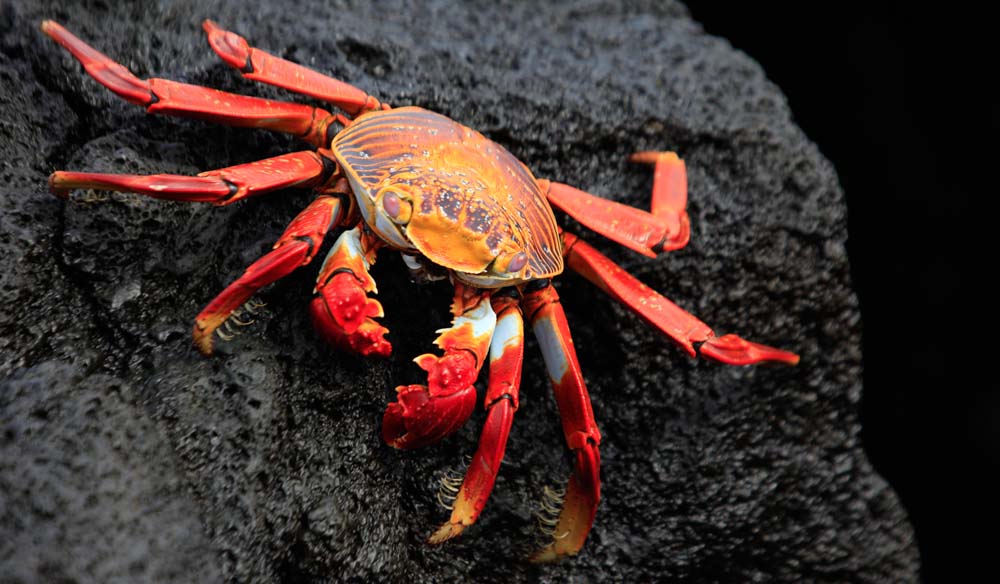 Sally Lightfoot Crab on the Bartolome Island in the Galapagos.

That’s precisely why I’m stepping aboard a Zodiac in San Cristobal’s tiny harbour, just 10 minutes’ drive from the airport. It’s taking me to the MV Origin, a shiny blue ship furthest from the shore that offers up space for just 20 guests (with 14 crew). There’s a bar on the top sundeck, a bubbling jacuzzi on the back deck and floor-to-ceiling windows in my cabin so, even when I’m reclining, there’s not a chance I’ll miss a single creature across the whole Galapagos.

The MV Origin offers two routes – I’ve opted for the Southern and Central Galapagos program, which will take me across five islands of the group on a journey of eight days and seven nights. 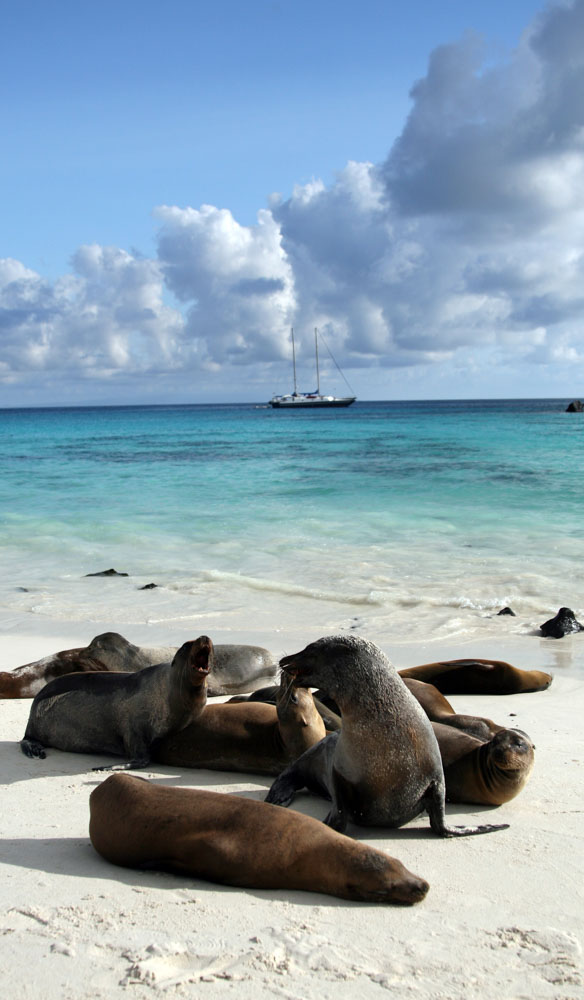 Sea lions are sprawled out on the concrete jetty in the mid-morning sunshine like itinerants sleeping off a big night; on the ride out to the Origin, metre-long frigate birds bombard the blue waters around us hunting fish, and a pod of five dolphins surf the bow waves of our Zodiac like they’re part of the free extras offered, along with the open bar. The sun’s shining high above and the bucket-listers are still at the harbour buying T-shirts with giant tortoises on them and spare memory cards. From my lofty position here on the top deck, with cool towel on forehead and welcoming cocktail in hand, everything looks exactly as it should. 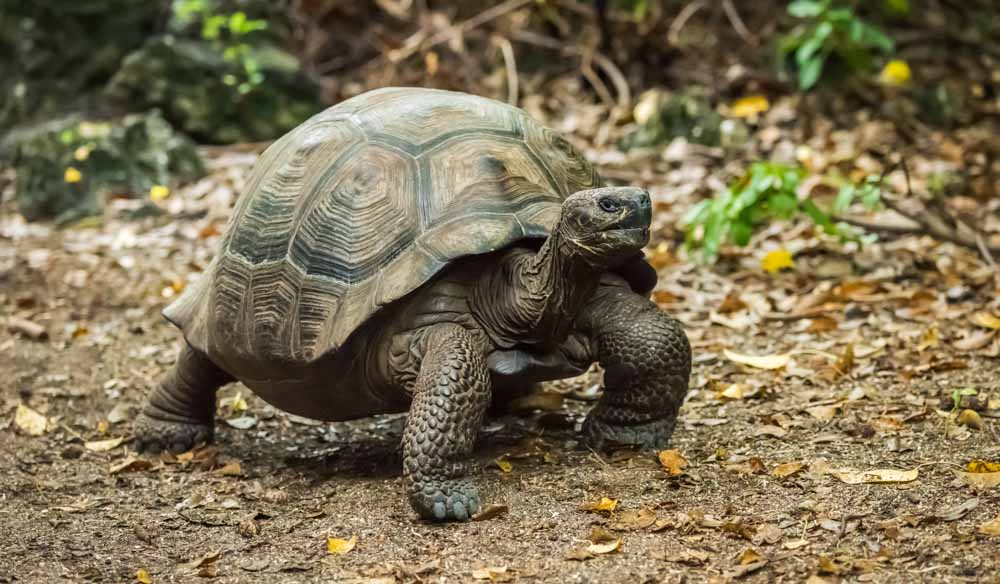 A Galapagos giant tortoise strolls though its day.

The Galapagos are one of the world’s most romanticised island groups. Ever since Charles Darwin ventured here in 1835 and used his observations of the islands’ extraordinary endemic animals to formulate his theory of evolution (which he based on natural selection of animal and plant species), the Galapagos have been cast as practically mythological. They sit in 45,000 square kilometres of Pacific Ocean straddling the equator, almost 1000 kilometres from the nearest landmass (Ecuador, to which they belong). This kind of isolation once made the Galapagos an ideal hideout for the planet’s most notorious pirates but these days, ironically, it’s what attracts travellers by the planeload: over 180,000 will make it here this year.

And yet, despite these ever-increasing numbers, within hours of stowing away aboard the good ship MV Origin, I feel blissfully lost at sea. As we leave the bustling port of San Cristobal behind us, with its lunar-like volcanic landscape devoid of almost any vegetation at all, not a single boat follows. A warm northerly breeze sweeps across the decks, I scan the horizon and see nothing but sea, and I feel the kind of anticipation only a voyage by sea can bring on. 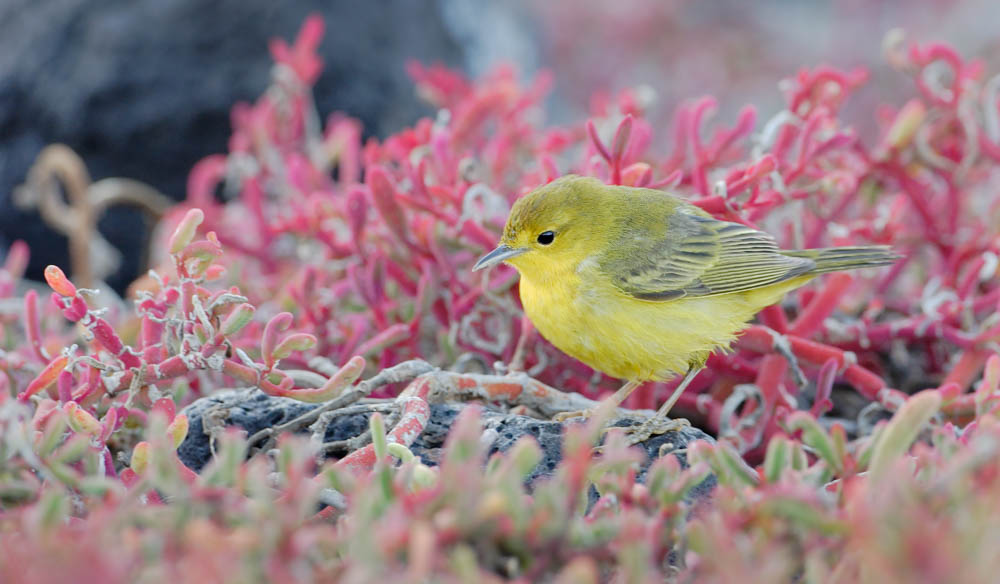 It still comes as quite a shock, however, when a pod of transient orcas rushes at us as we start our voyage to the island of Española. One moment the sea is as blue as the sky above, the next it’s a mess of black and white, as creatures the width and length of transit buses come right up under the ship, surfacing just beside us. Our guide, naturalist Peter Freire, says that this sort of thing is what we should be ready for here in these islands he was raised on. “I tell photographers, you don’t need the big zooms; here, the animals come closer than you’ve ever seen before.”

As we arrive at Punta Suarez on Española, we step over marine and land iguanas battling over the placenta of a just-born sea lion. Beside them, blue-footed boobies perform the world’s most elaborate courtship ritual. When I snorkel in the afternoon, sea lions somersault over the top of me, and Galapagos and black-tipped reef sharks touch my legs as they fish the waters beside me. Later, as we walk across a barren ridgeline above a stunning white coral beach, great frigates fly right in among our group as they attack the nests of red-footed boobies, trying to steal the fish they caught to feed their young. I feel less an observer and more a part of the lives of these creatures; in fact, in a week, the only creatures that seem bothered by my trespassing at all are the rare pink flamingos I glimpse on the island of Bartolomé. 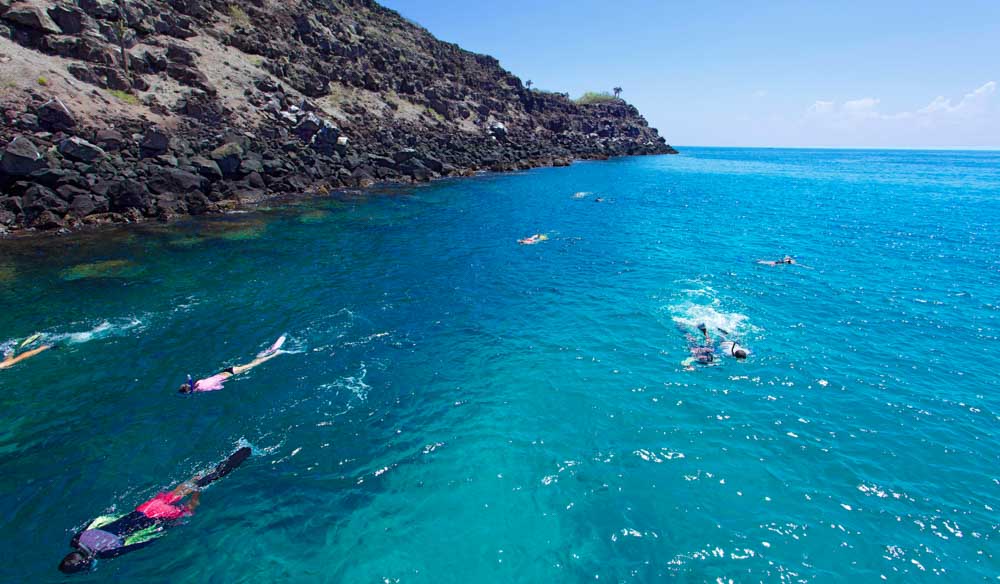 Swimming brings you even closer to the Galapagos’ unafraid sea fauna.

But while so much is written of the vast numbers of rare creatures that inhabit the Galapagos, far less is known of the islands’ physical attributes. With their stilted vegetation and sharp volcanic landscape, the Galapagos Islands are no clichéd tropical paradise, yet warm blue water laps onto a thousand hidden bays of perfect white-sand beaches where few visitors ever step.

On my second day at sea, I take a paddleboard over the top of rainbow-coloured coral at Gardner Bay as eagle rays and green turtles swim beneath. I paddle to a long beach, where I sit for an hour as reef sharks, turtles and rays pass me by, just a metre or so from the shore. 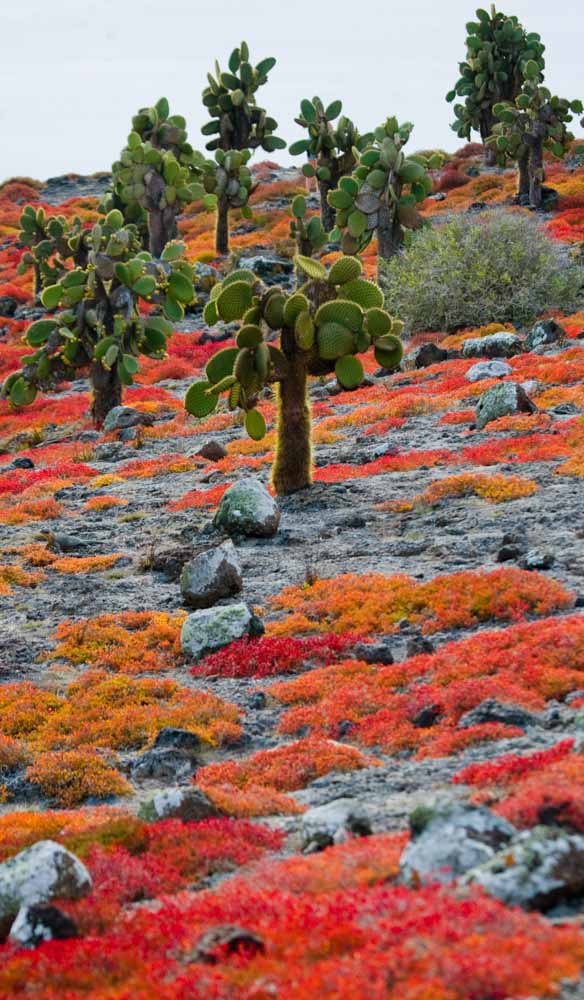 Some of the Galapagos’ most famed visitors were less than flattering in their observations of the island group. Darwin himself noted: “The country is compared to what one might expect the cultivated parts of the infernal regions to be”. But I find the harsh outlines of these islands captivating. One afternoon we climb right to the top of a volcanic caldera, and look down across ancient lava flows to an isolated blue-water bay. On another, I stand atop a paddleboard and ride through sea caves created by volcanic eruptions millions of years ago.

I like that we do most of our steaming by night. Each morning I wake to a weird and wonderful new world at anchorage. Small cruises bring on a certain kind of selfishness, and in the Galapagos I think it’s accentuated – when I see another boat, its presence grates on me. I’m really not happy again until they’ve moved on. Even on my own boat I start to crave the sanctity of dawn, when I walk to the sundeck with a cup of tea to watch the stars fade out high above me. Here, I’m free from small talk, with only the creatures of the sea feeding below me for company. And it’s mine, all mine. 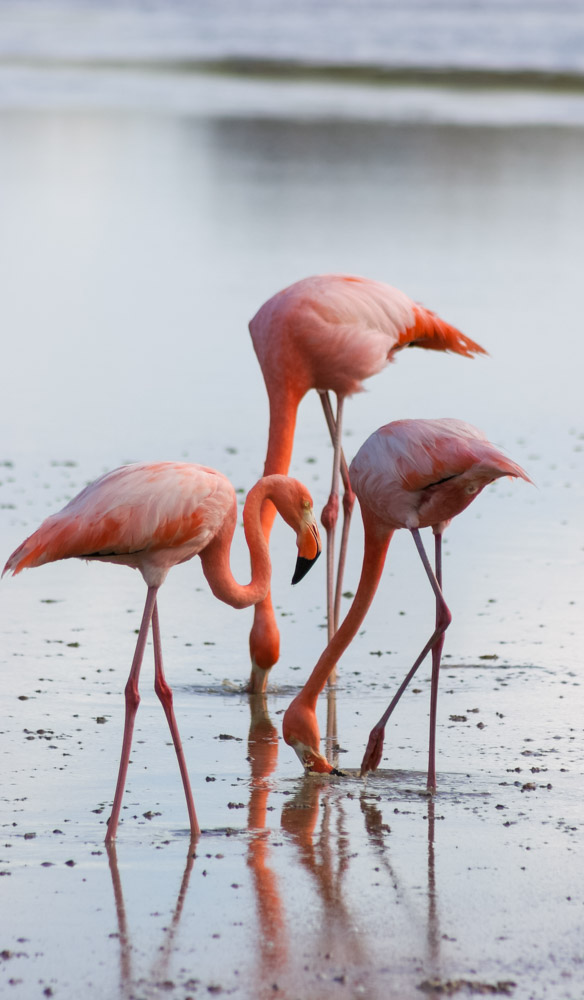 The rare flamingos of Bartolome.

While each shore excursion reveals islands of rare creatures, I find myself looking forward more and more each day to returning to the ship. It has become my whole world, and I like the sense of security that comes with shrinking my existence down to these sturdy slabs of timber and fibreglass set on an open ocean. After each dinner, I retreat to the top deck to watch the stars shoot the whole way across the night sky.

Though we have an itinerary, life at sea follows far less rigid timeframes, with activities revolving around the sun rising and setting. We visit quaint fishing townships sprinkled throughout the Galapagos (only 25,000 people live here), but largely, life revolves almost entirely around the moods of the ocean. 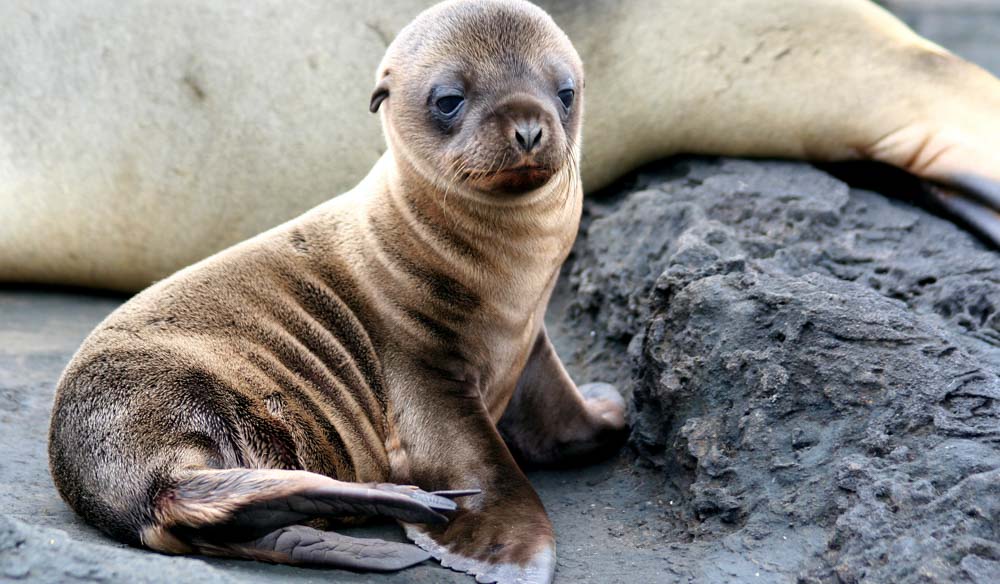 And then it’s done, and I’m deposited back to the queues at San Cristobal airport with lungs full of salty air. The window seats are all gone, claimed by the bucket-list brigade, and the flight is delayed two hours from Quito, but I find I care less now about any of that.

In my mind, the wind’s still blowing across the deck and the sun’s still streaming down on my face; and I know the creatures captured on my memory cards aren’t nearly as important as a mind cleansed by the infinity of all that ocean.

Fly to the Galapagos Island from Australia with either LATAM or QANTAS, via Santiago. Latin America specialist Chimu Adventures offers a range of Galapagos trips and can also create tailor-made itineraries including international flights from Australia, transfers and trips on the MV Origin.

The MV Origin runs two seven-night itineraries – the Southern and Central Route, and the Western and Northern Route – departing every Sunday year-round from San Cristobal island. All visitors to the Galapagos must pay a US$100 Galapagos entrance fee, which you can pay on arrival. The US dollar is the official currency of the Galapagos Islands.