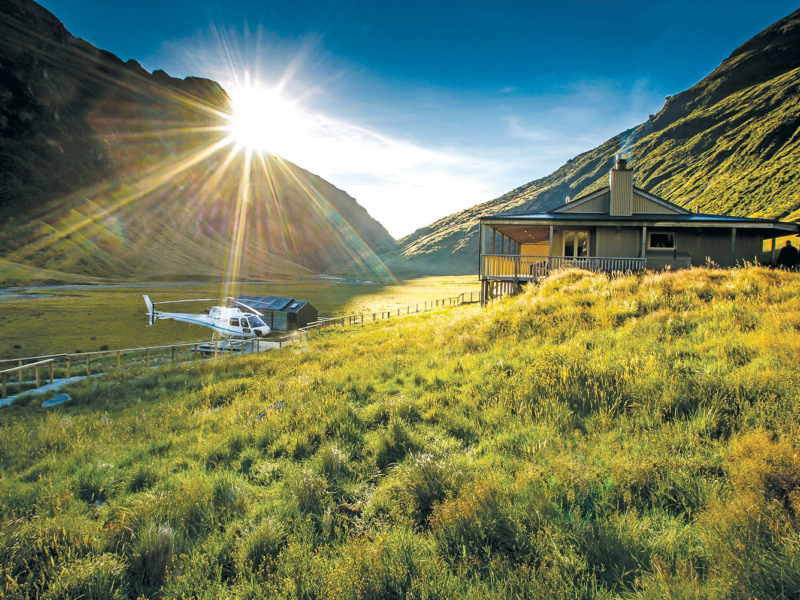 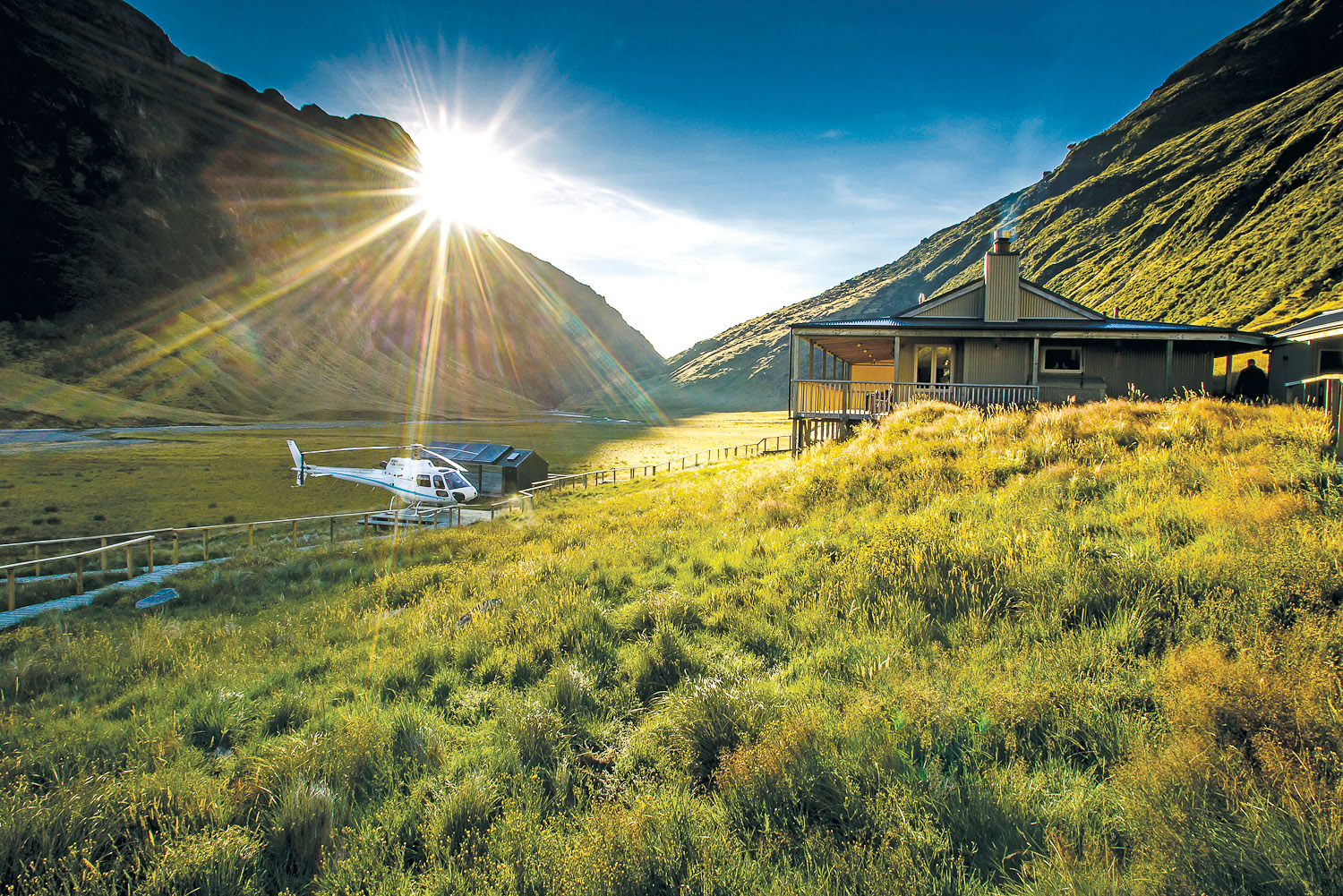 Whether you fancy fishing, heli-skiing, hunting or top-notch food and wine, Minaret Station in NZ’s remote Southern Alps may just be the ultimate adventure money can buy. By Alissa Jenkins

As a travel journalist, in a profession where you are routinely shown the best of a destination, it takes a special assignment to be lauded one of the best days of my career. This, however, is one of those days.

It begins like any other; in a bed. Well, more like a king-sized cloud with a possum fur throw strewn across it.

I’m in one of four guest chalets on Minaret Station – a 20,000-hectare helicopter-only-accessible property set at the head of a glacial valley on the western shores of Lake Wanaka.

Stunning to look at but tough to farm, many failed to domesticate this rugged alpine backcountry until aviation entrepreneur Sir Tim Wallis took on the challenge in the 1960s, shaping it into the family owned and run sheep-deer-and-cattle farm it is today.

A more recent addition to the business, however, is its corrugated-iron chalets, positioned in the heart of the station. But with no road access, every single timber plank, pipe and pillow had to be choppered in. Quite the feat when you consider the details, from heated towel rails and cosy woollen rugs to an outdoor hot tub to soak up the mountain views.

Leaving my chalet for a breakfast of poached eggs and hot coffee in the nearby Alpine Lodge, our host Anna explains how Sir Wallis’s four sons now run the multifaceted family business: one brother manages the station’s farming and trading, two brothers run helicopter services, while third-in-line Matt Wallis is Minaret’s tourism manager, overseeing everything from the accommodation to the various heli tours available.

Yes, heli tours. It seems a family chopper or two prove not only handy for farming, but for showing travellers world-class heli-skiing, fishing and hunting locations that’d be otherwise unreachable in the Southern Alps.

As Matt lifts heavy eskies into our helicopter’s storage compartment, he reminisces about growing up in New Zealand’s high country. “Jumping in a heli was like a city kid getting on a train – it was a part of day-to-day life,” he says, squeezing in the last backpack. “As a kid from about nine years old, Dad would drop me off somewhere on the property in the morning, then pick me up from the same spot in the evening. I’d spend the day on my own swimming, hunting and exploring – it’s an extraordinary upbringing that rural kids get in New Zealand.”

Once packed our party of six, including Matt and his best friend (and our pilot) Dougal, piles into the helicopter. This will be our sole mode of transport for the day.

Seated, belted and tuned into the aircraft’s intercom, our heli propels upwards, veering slowly over the chalets, before boosting down the valley and over Minaret Peaks.

Early morning light streams across the mountains, casting a shadow of the chopper on grassy slopes below. The further we fly across Mount Aspiring National Park, the thicker patches of snow become until all peaks are iced in a smooth blanket of white, like a freshly-opened tub of ice-cream.

“See how the snow looks quite dirty on the slope over to the right?” Matt asks through the headset, pointing to a bluff. “The dark lines are ash that has settled on the snow, caused by Australian bushfires or volcanic eruptions in South America, blown across to here.”

As we cross the Barrier Range, the spine of the Southern Alps, we enter into the northern reaches of Fiordland National Park. Navigating around jagged cliff faces and through patchy fog, Dougal delicately settles the helicopter on a flat surface atop Tutoko Glacier.

There are over 3000 glaciers that glisten across New Zealand, most of which have formed around the tail-end of the South Island.

Once the heli doors open, a gusty and blindingly white countryside awaits. Aside from Mount Tutuko peaking up in the background, this otherworldly landscape resembles more photoshoot backdrop than New Zealand wilderness.

Further down as the glacier steepens, deep crevasses can be seen dissecting the icy crust. But with today’s unusually thick fog blocking the rest of the view, we swiftly depart south for our next pitstop. And it’s a beauty.

Going by the name of Lake Erskine, the peacock-blue centrepiece is merely freshly melted snow that has trickled down Mount Tutriko. Surrounded by craggy mountain faces, it’s here that we encounter the only other helicopter (piloted by Matt’s brother Nick), let alone travellers, that we see all day.

“By showing people this region’s most exclusive places, we want guests to not have to see another tourist during their stay, so it feels like you have it all to yourself,” says Matt, soaking up the sun as we lounge on bankside boulders. “That way, you get a real sense of just how remote and secluded we are.”

Secluded indeed. Though Matt remains tight-lipped about names, there have been a number of well-known personalities from around the world who have lapped up the privacy and isolation that Minaret offers. So much so that when one particular A-lister visited Minaret, New Zealand gossip magazines complained that the star must not have arrived in the country after all.

En route to the next stop we circle around Sutherland Waterfall – the tallest waterfall in the southern hemisphere at 843 metres, pass through deep green valleys of Lord of the Rings magnitude and fly over a seal sanctuary off Yates Point where chubby pups frolic in the protected shallows.

Once landed on a desolate beach 24 kilometres north of the South Island’s famed Milford Sound, Matt performs a quick costume change before launching into the choppy Tasman to catch our seafood lunch. Meanwhile, the rest of us recline on the sedimentary rocks that litter the beach, sipping wine and eating cheese.

“What’s the name of this beach?” I ask Dougal, pen poised.

“Jeez, I reckon it doesn’t have one,” he says, adjusting his cap branded Alpine Helicopters (the aviation sister business to Minaret Station). Given over half of New Zealand’s South Island is protected national park, Dougal explains there’s countless locations along the Fiordland coastline without an official title. “This area hasn’t changed much since European settlement, besides the damage done by possums that were introduced,” he adds.

A bottle and a half of sauvignon blanc later, Matt emerges with six crayfish and a butterfish. By now we’re due for a scenery change.

Back in the chopper we propel up the Pyke River Valley, passing over rocky crests stacked together like a neighbourhood of peak-roofed cottages. Then, nestled among the eastern slopes of the Barrier Range, a patch of glimmering blue appears that we settle beside: Lake Lochnagar.

Overlooking a grassy ridge, the lake is lined by glistening slivers of schist rock, which make for perfect skimming stones. While we polish off what wine remains in the eskies, Matt and Dougal whip out bowls of fruit, fresh salads and frying pans to cook the just-caught sea fare, as though Mary Poppins left her bag of tricks in the helicopter.

So just how much does one of the best days of my career cost?

Almost $9000 for the customised private charter, which, as Matt stresses, is tailored to daily conditions and every group’s interests.

Where?
A 15-minute helicopter flight to Wanaka

How much?
Chalets from $1807 a night (exc. transfer); minaretstation.com

How to get there
Air New Zealand operates daily flights to New Zealand from Sydney, Melbourne, Brisbane and Perth.
airnewzealand.com.au