How to have the best White Christmas in Canada 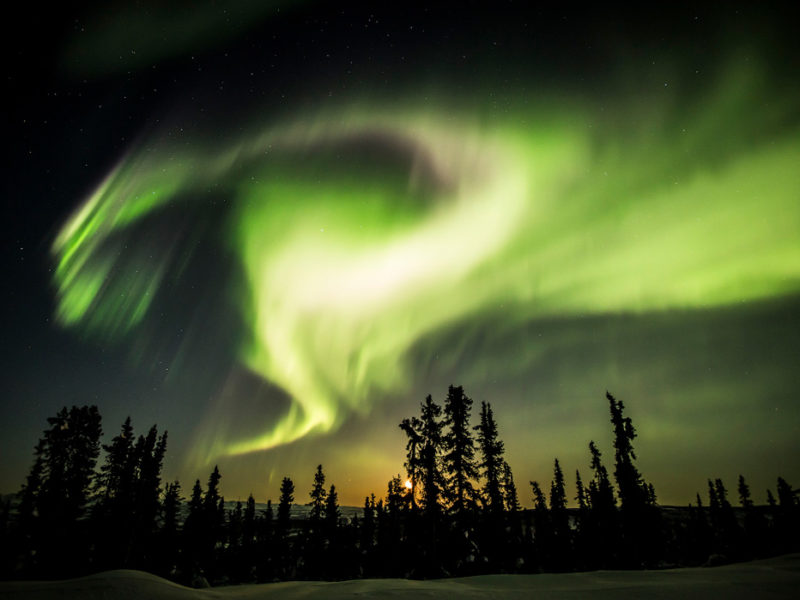 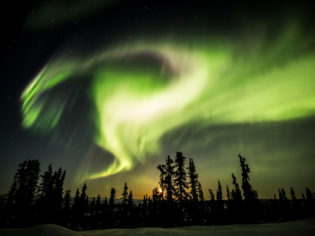 The beautiful swirl of the Aurora Borealis.

With snowflakes and sleigh bells, ski slopes and skating rinks, Canada is the ultimate holiday destination for a white Christmas.

Ski with Santa in Whistler

Don your best Santa suit (or Mrs Claus) and hit the slopes.

You don’t have to go to the North Pole to get into the Yuletide spirit with jolly Saint Nick. He’s just over at British Columbia’s world-renowned Whistler Blackcomb ski resort. In fact, if you head there the week before December 25, you’ll get to meet plenty of Santa ‘trainees’, who’ll be skiing and snowboarding down the slopes as part of Santa Day. The annual event takes place the Saturday before Christmas, and the first 100 people to arrive in full Santa or Mrs Claus attire get a free day lift ticket. To be involved, arrive at Garibaldi Lift Company, at the base of Whistler Mountain, in your full Santa-esque ensemble.

The day officially kicks off the holiday season in the resort and is a great way to start your ultimate white Christmas holiday in Canada.

It’s been hailed “the world’s best skating rink”, and when you arrive at Lake Louise in Alberta, it’s easy to see why. Location is everything – the frozen lake sits glistening on the doorstep of the enchanting Fairmont Chateau Lake Louise, with the Rocky Mountains as a backdrop. Add a castle made of ice bricks, and hot cups of cocoa to warm the soul, and you’ve got one memorable Christmas experience.

Skating is available from mid-December to mid-April, and skates can be rented from The Fairmont.

Ride in a horse-drawn sleigh in Sun Peaks

Ride in a horse-drawn sleigh in Sun Peaks.

Explore one of Canada’s most popular family-friendly ski resorts, Sun Peaks, while huddled under a blanket on a horse-drawn sleigh. Gentle draft horses take passengers on daytime, sunset and evening tours through the village, and into the open for views of the surrounding valley and mountains.

Go mushing in the Yukon

Go mushing in the Yukon with your very own team of huskies.

Prepare to get your heart racing on a quintessential Canadian adventure, with your very own team of huskies. At Sky High Wilderness Ranch in Yukon Territory, you can learn how to mush through a winter wilderness. As the dogs pull you down narrow, snowy tracks and around pine trees, you’ll discover just how much they love to run, and how addictive dog sledding can be.

It’s a great hands-on activity for intrepid couples and kids alike, as you learn how to communicate with the dogs and steer the sleds, and about the important role dog sledding has played in Canada’s northern communities.

Sleeping in a room made of ice isn’t as crazy as it sounds when it looks like the suites on offer at Canada’s famous Hotel de Glace. Just 10 minutes from downtown Quebec City, this ice hotel is the stuff of snow bunny dreams. A popular spot for weddings, it’s the perfect place for couples to rekindle their romance in its 44 rooms and suites, some with ice sculptures and even fireplaces. Kids will feel like they’ve escaped to their very own Narnia – it’s a fantastical Christmas experience they’ll cherish for years to come.

It’s worth extending your Christmas holiday into January just to experience the magic of the hotel. The hotel is open between January until the end of March.

Ride The Canadian train through the stunning valleys of British Columbia.

The Canadian train travels from Vancouver all the way to Toronto, but the best leg of the journey is undoubtedly through the stunning valleys of British Columbia.

Visit in winter and you’ll find it difficult to draw yourself away from the glass-domed viewing carriages. You’ll spend hours watching frozen waterfalls, aqua lakes and mountain peaks pass your window. All up, you’ll spend about 19 hours on board, disembarking in the pretty mountain village of Jasper, Alberta, where you can hire skis and head to Marmot Basin resort.

Join traditional Christmas carolers among hundreds of fairy lights in the ever-popular Butchart Gardens on Vancouver Island. During December, the gardens undergo a festive transformation, with Twelve Days of Christmas displays that feature two turtle doves, three French hens, and, well, you get the picture. Adding to the festive cheer, children are encouraged to exchange homemade paper snowflakes for a hot chocolate in the coffee shop.

The Magic of Christmas theme runs throughout December.

Quebec City is aglow with Christmas lights from the beginning of December, making it a magical place to explore at night. Go on a self-guided walking tour (don’t forget to pack some warm boots), stopping at Notre-Dame-des-Victoires in Place Royale. Make sure you also wander down Rue du Petit-Champlain, one of Canada’s prettiest winter streets. Young children will also be able to meet Santa in the Petit Champlain District or at Fairmont Le Chateau Frontenac, in Old Quebec. Don’t forget to check out the toboggan run on nearby Dufferin Terrace, as well.

The toboggan run is open from mid-December to mid-March.

Watch the aurora borealis in the Yukon

This cosmic experience will stun you.

A Christmas in Canada wouldn’t be complete without spending an evening watching the aurora borealis dance across the sky. The best places to view the natural light show are in Canada’s northern regions, and Yukon is one of the most accessible. For travellers short on time, Northern Tales offers one-night Northern Lights viewing experiences, about 25 minutes from Whitehorse. Couples can snuggle around a campfire as they watch greens and purples ripple above, while children can stay warm inside a heated wall tent or log cabin as they wait for the show to start.

The tours start around August and continue until April the following year.

If you like the look of a Canadian getaway, make sure you check out our Canada travel guide, so you can ensure you read up on the very best the region has to offer.

How to have an epic Whistler ski day

Shred to your heart's content at one of Canada's finest ski resorts.  (more…)...

How to have an amazing ski-free winter holiday

From snowshoeing and dog sledding to watching the Northern Lights, these ski-free activities make winter look particularly cool. A winter holiday in ...

Why Non-Skiers Will Love A Ski Resort Holiday

Gone are the days when Canadian ski resorts meant hitting the slopes and not much more. From Scandinavian spas to fondue fountains, here we reveal the...

Everything You Need To Know About Skiing In Canada

Get out those mittens and start doing your stretches, as I lay out everything you need to know for a swish down the Canadian slopes next winter. Here'...

Double black diamonds ahead! Canada’s most extreme runs can give even the experts pause for thought. 1. Hawaii Five-O – Blackcomb Mountain Whist...

Terrain parks grew up in Canada. Freestyle skiing debuted at the 1988 Winter Olympics in Calgary, and one of the first snowboarder playgrounds appeare...