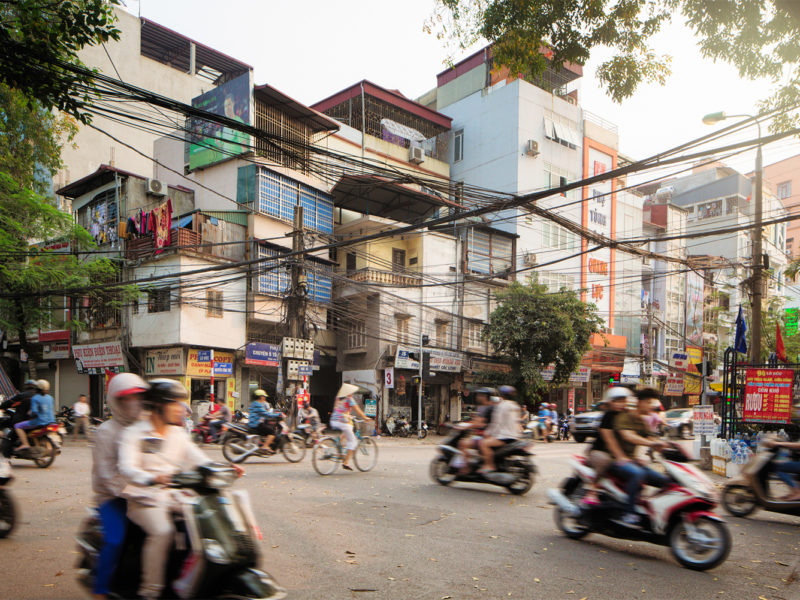 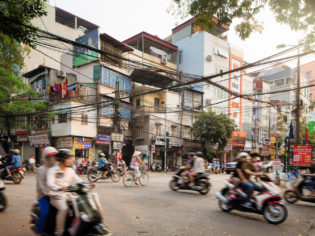 From the Colonial charm of the Old Quarter to the delectable street food begging to be devoured; Hanoi’s frenetic pace will leave you breathless and hungry for more.

Hanoi’s biggest market is set in the heart of the Old Quarter and is a rabbit warren of colour and activity.

Built by the French at the end of the 19th century, you’ll find everything from fashion to homewares, electronics and food. There are also some gorgeous traditional Vietnamese fabrics, which make a great souvenir. Having said that, the market is aimed more toward locals than tourists; a visit here can be rewarding simply for the experience alone. 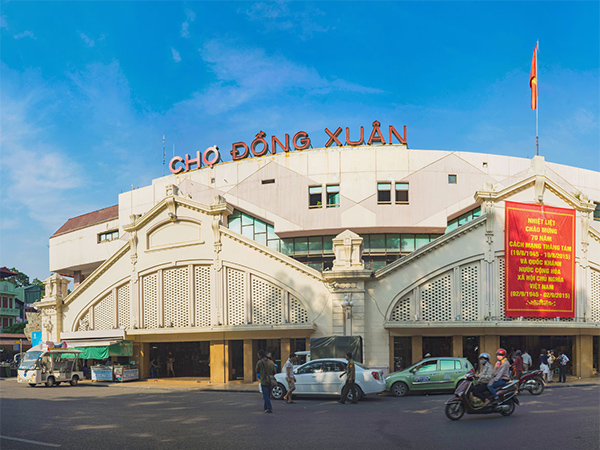 The action outside Dong Xuan Market

2. Visit the One Pillar Pagoda and the Perfume Pagoda

If you’re going to hit up two pagodas during your time in Hanoi, pick these two.

The One Pillar Pagoda is said to represent a lotus flower growing up out of the water. It is set in a beautiful, quiet garden with plenty of benches, so you can sit peacefully and drink in the surrounds.

The Perfume Pagoda is a little bit out of town, and is part of a sacred site featuring a maze of Buddhist temples set into a limestone cliff, with the Perfume Pagoda at the centre. The area itself is full of natural beauty, and is certainly worth a day trip. 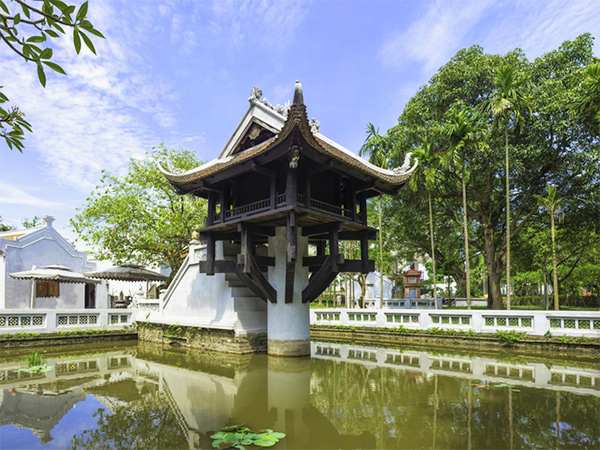 The mad traffic. The gorgeous Colonial architecture. Buddhist temples and quaint shophouses. There is nothing quite like Hanoi’s Old Quarter.

Set over a square kilometre, there is so much to explore in this beating heart of Hanoi. When you get peckish, take a break at one of the many excellent cafes and bakeries, or sample some of the delectable street food on offer from roadside vendors. There are also plenty of great bars in this area, so if you want to kick on in the evening for a bit of bar-hopping, you’ll be well looked after. 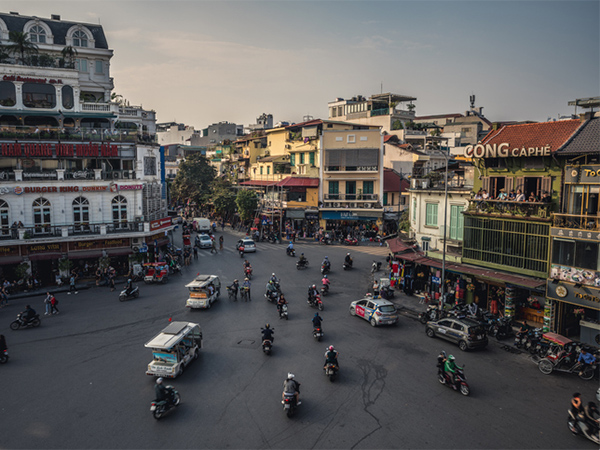 This is the final resting place of Ho Chi Minh, the beloved leader of Vietnam, known to his people as ‘Uncle Ho’. His body is preserved here in a glass case – apparently against Ho Chi Minh’s wishes, but the people wanted a monument so the popular leader could ‘live on forever’. The mausoleum, based on Lenin’s mausoleum in Russia, opened to the public in 1975. A hot tip is to get there early to avoid the queues (and the heat). Be sure to dress respectfully for your visit here. 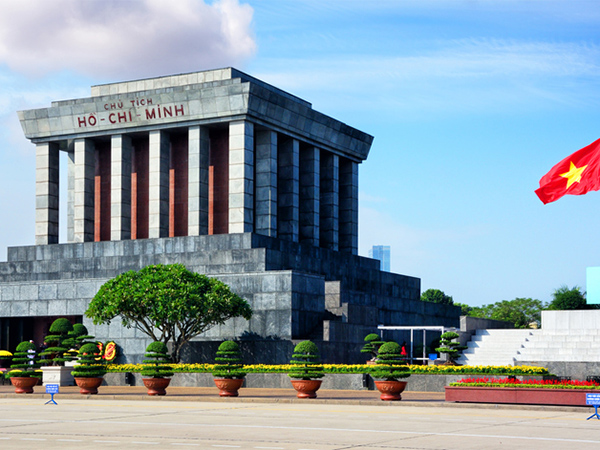 If you want to get away from the hustle and bustle of Hanoi, a walk around Hoan Kiem Lake might be just what the doctor ordered. At the centre of the lake, on a small island, is the Ngoc Son Temple. The island on which the temple is built is known as Jade Island, and is accessible by the Huc Bridge or Rising Sun Bridge. It’s a beautiful, peaceful spot to sit and watch the locals going about their day.

Modelled on Paris’ Palais Garnier, this is a spectacular neoclassical landmark in the heart of Hanoi. Featuring an Italian-made marble floor, copper chandeliers and exquisite French murals on the ceiling, this French colonial opera house took 10 years to build, and was completed in 1911. The performance space is now used for a wide range of shows – not just opera – so check out the schedule to see what’s on during your visit. 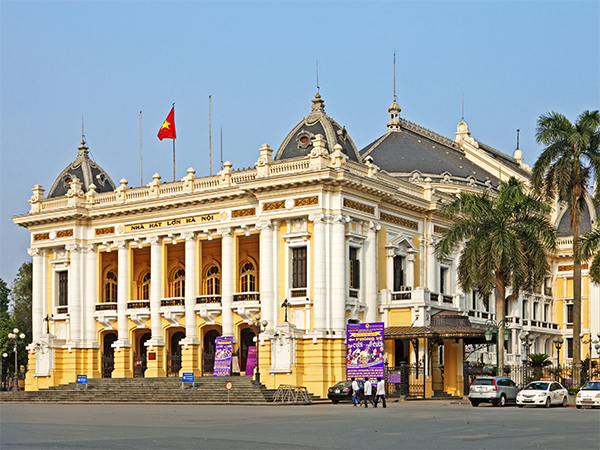 7. Do a street-food tour

One of the greatest things about travelling in Vietnam is the food. You can eat like a king for a pittance, thanks to all the magical street-food vendors. Sometimes it’s a good idea to have a local help you navigate the different delicacies on offer, and there are a number of quality food tours you can do in Hanoi. Hanoi Motorbike Street Foods runs a night-time tour made for the more adventurous traveller, while Hanoi Food on Foot is for those who prefer not to fly around on two wheels.

8. Visit the Temple of Literature

Built in 1070, this temple has a rich history of education. It is dedicated to Confucius, sages and scholars and features a number of different courtyards where study sessions and exams have taken place over the last millennium. The temple is home to the Imperial Academy, Vietnam’s very first national university. It’s a gorgeous example of traditional Vietnamese architecture and is one of the most photogenic spots in the city. Two of the courtyards boast landscaped gardens, and another is home to a large pond known as the Well of Heavenly Clarity. 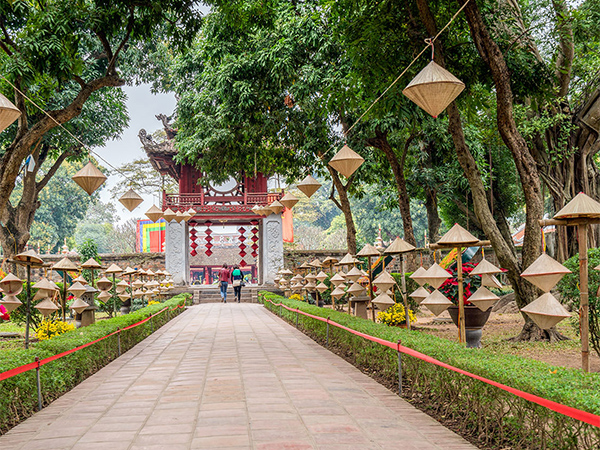 Take a stroll through the gardens at the temple of literature

9. Check out a water puppet show

The Thang Long Water Puppet Theatre displays an artform that dates back to the 11th century. It was a time when the rice paddy fields were flooded and artists performed puppet shows in waist-deep water, making it look as if the puppets were dancing on the water’s surface. Performances here are accompanied by a traditional Vietnamese orchestra. Tickets tend to sell out, so book in advance.