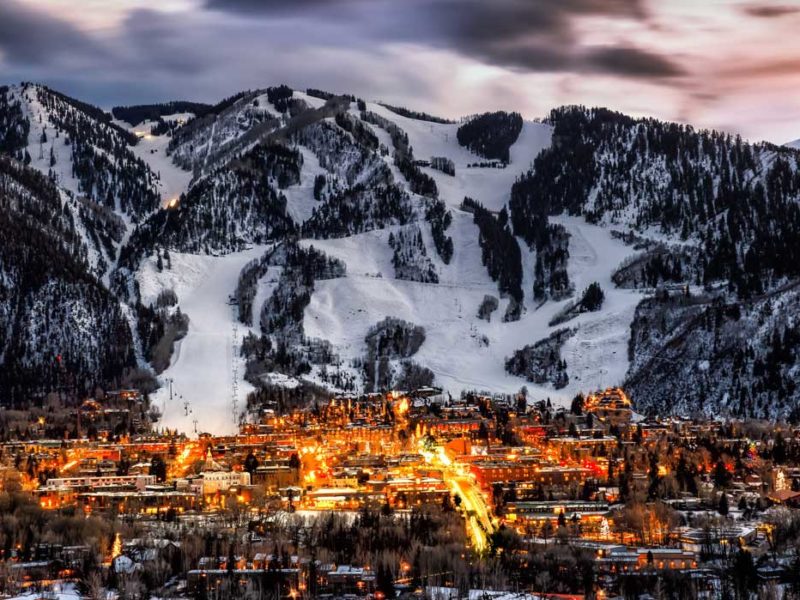 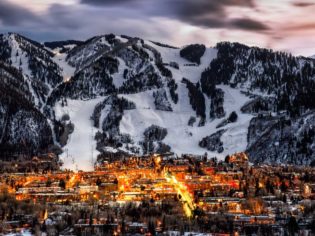 Forget movie stars and fur coats, Craig Tansley reveals that the earth’s most celebrated ski town, Aspen, is the Byron Bay of the ski world…man.

It’s Friday night in Aspen, Colorado yet its pretty, snow-covered sidewalks are cluttered with unwashed (and mildly washed) sexagenarians in every conceivable shade of tie-dye.

Thick, unruly beards threaten to burst into flames as fat, pungent-smelling doobies are passed from mouth to mouth; I’m as high as a kite just catching the backdraft.

Shakedown Street – Aspen’s most popular Grateful Dead covers band (and there’s an awful lot of them about in Colorado) – are playing at Aspen’s BellyUp Bar. It’s sold out… has been for weeks, by the time I make it through the doors the band have launched into the Dead’s classic The Music Never Stopped and three generations of die-hard fans are forcing ski-damaged limbs to bend and contort on the beer-soaked dance floor.

While Jennifer Aniston might come to Aspen every Christmas and Kevin Costner owns the fanciest house in town, the truth is it’s the dead-heads… the hippies… the counter-culturists… who rule this town. “If Jerry Garcia (Grateful Dead’s iconic guitarist) was still around and he ran for mayor no-one else would get a vote,” a dread-locked ski instructor tells me. “Aspen’s been about peace, love and rock’n’roll since the ‘60s,” Nina Gabianelli from the Aspen Historical Society says. “Long skis, short relationships, that’s what founded this town.”

Aspen long ago earned its stripes as the star-spotting capital of the skiing world, but at its heart, it’s just a rainbow village in the Rocky Mountains that John Denver loved to sing about (just think: Byron Bay covered in snow).

For every designer store selling $30,000 fur coats, there’s a dark and dusty cowboy bar serving ice-cold $2.50 American beer and 45c buffalo wings; or a thrift store selling the kind of ski gear Aniston probably wore as a kid. “In Aspen, you either have three homes or three jobs,” town historian Tom Egan says. “Most of us fall into the latter category and the rest fly in and out in their private jets and keep out of our way.”

In many ways, Aspen’s past mirrors that of our own rainbow icons, Nimbin and Byron Bay. Formerly the domain of God-fearing ranchers, Aspen lay siege to hippies and counter-culturists in the late ‘60s and early ‘70s, led by Hunter S. Thompson. In 1970 he even ran (unsuccessfully) for mayor. As the greed of the ‘80s and ‘90s threatened to turn Aspen into just another ski resort conglomerate, the hippies fought hard against developers to ensure Aspen kept its small-town vibe.

“It’s always been about the locals all in it together,” Egan says. “The same thing with Hunter, all he ever wanted was to keep Aspen for the people who wanted to come and love her. Anyone else could get the hell out of town, he’d help ‘em too.”

I’m perched on a barstool in Thompson’s old hang-out, the Woody Creek Tavern, 10 minutes drive from town. If anywhere’s the antithesis of Aspen’s sophisticated global image, it’s this place with its tattered walls and simple bar grub. 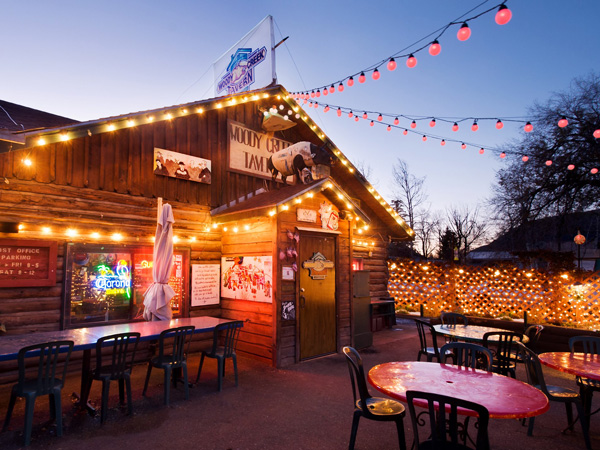 “Hunter used to sit over there,” Egan says pointing at a ghost on a bar stool. “No one really ever noticed him, it’s just like that around Aspen.”

Aspen’s full of these type of establishments. While the Caribou Club on Aspen’s East Hopkins Street charges $20,000 for life membership, across the street you can order a $2.75 chicken taco and a $2.50 beer at local hang-out, Zane’s Tavern.

Locals like to take their own form of ‘swanky to skanky’ bar tours after skiing, starting with the private jet set at hot spots like The The Terrace Room at the Little Nell, and ending up somewhere you can order a round of beers and shooters for all your buddies for less than $20.

Even on the mountains themselves, Aspen has its own unique touches. Over 50 shrines have been built all over Aspen’s four ski mountains to hippie icons like Jimi Hendrix and Jerry Garcia – devotees visit every week and restock Jerry’s marijuana needs in the afterlife.

I first fell for Aspen a decade back; having spent my childhood in Byron Bay, the parallels between the two destinations made me feel instantly at home. Like Byron Bay, it’s the kind of town you can spend a week in and know everyone’s name, provided you avoid the tourist traps.

But quite aside from the alternative ambience, it’s worth remembering Aspen is the world’s best ski destination. 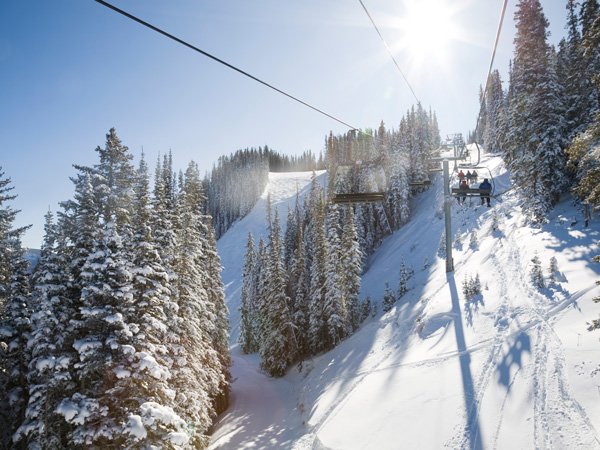 There are alpine views from every mountain on Aspen’s four ski mountains.

Built along the ridiculously pretty Roaring Fork Valley in central Colorado, Aspen is actually made up of four ski resorts, all available on the one ski ticket. Skiers can access Aspen Mountain, Aspen Highlands, Snowmass and family-friendly Buttermilk Mountain, all located within a short (free) bus ride of each other.

What this means is every type of skier is catered for, Buttermilk Mountain is the United States’ best beginner mountain, Snowmass has the most vertical metres descent in the entire US, while Aspen’s backcountry terrain offers some of the most challenging skiing on earth (the Highland Bowl at Highlands is one of the world’s most famous inbound ski challenges).

Aspen might have the best après ski scene both on its ski mountains and in its rustic little mining town, but it’s the all-natural pleasures in Aspen that really make the place. One night I shun every one of the town’s 50 plus cafes, bars and restaurants and hike all the way up to the top of Aspen Mountain.

Nothing but a full moon lights my way as I ride freshly-groomed corduroy snow all the way back down.

“There’s a Ute Indian saying (the first inhabitants of Aspen) that warns if you stay overnight here you’ll never be able to leave,” a long-time local tells me one night at Little Annie’s.

“There’s a whole town of us that are cursed. They’ll only get us out of here in wooden boxes.”

Qantas flies to LA daily from Sydney, Melbourne and Brisbane then connect directly to Aspen with American Airlines.

The best snow can fall between late December and mid-March, although spring conditions in late March and throughout April mean you’ll beat the crowds and get more sunshine. Avoid school holidays and President’s Day Weekend. 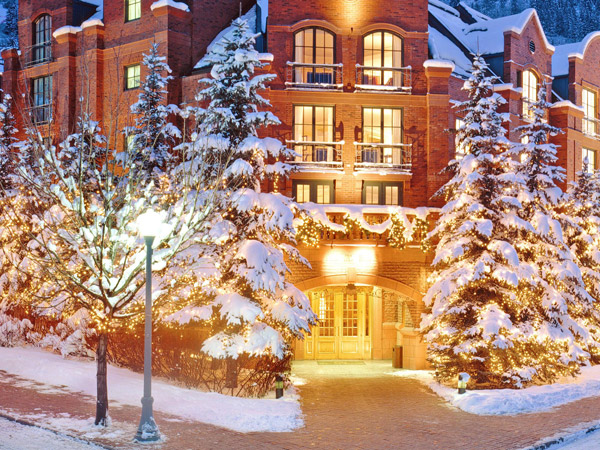 Located right at the bottom of Aspen Mountain, St Regis is one of Aspen’s most exclusive resorts and is located within easy walking distance of all of Aspen’s shops, restaurants and entertainment. There are 179 rooms and suites looking out across the slopes or town.

Aspen’s residential Vietnamese restaurant is Bamboo Bear. Opened from Thursdays to Tuesdays and only closing up early if the food runs out. Their pho is cheap, warm and flavourful, which is perfect for when you just get off the slopes. Side it with a serving of fried spring rolls and you won’t even reach $20.

Sample the fusion dishes of one of the world’s top Japanese chefs – Nobu Matsuhisa – set within a quaint Victorian house with one of Aspen’s coolest bar settings. Visiting celebs can be found here, but there’s no pretence.

Have the most riotous lunch available in any ski resort in America within the Bavarian craziness of Cloud Nine on top of Aspen Highlands.

Check out Aspen’s hippie history – especially the legendary ‘Aspen University’ (which specialised in joint rolling and beer drinking) at the Aspen Historical Society.

Experience the best snow anywhere in Aspen on a snowcat powder tour on Aspen Mountain.

The best thing about

Nowhere offers such diverse skiing experiences with endless après ski opportunities quite like Aspen, and the best thing is Aspen is as much for you as it is for Paris Hilton. 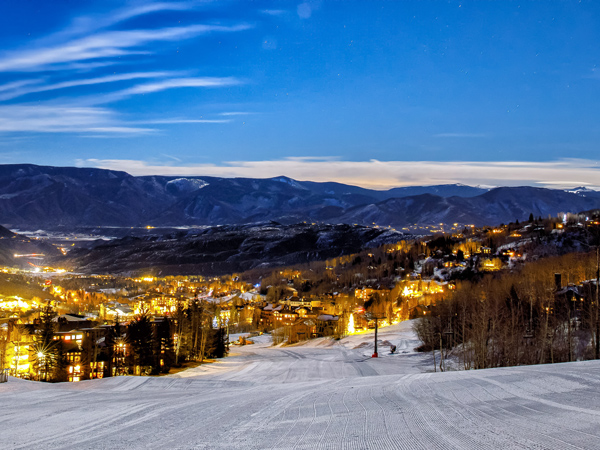 The city skyline of Aspen is magical.

The worst thing about

Like anywhere in the States, you’ll be sweating on tipping procedures from the moment you arrive. Keep a fist-full of dollars handy.

1. Check out the Aspen Daily News – it’s free and lets you know about upcoming events as well as providing an insight into everyday Aspen life.

2. Go green and take the free buses that circle town to each ski mountain every 15 minutes.

3. Don’t get too paranoid about security – locals leave skis out overnight and only lock their doors in summer to keep bears out.

4. Be careful in the backcountry – only go there if you are an expert skier or have a guide.

Heading out to Colorado? Check out our ultimate travel guide on this great Middle American state. 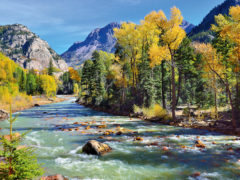 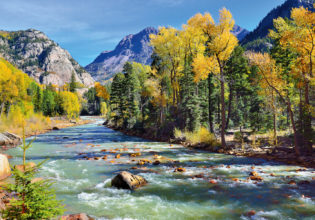 Aspen in summer – is it even better than in winter?

While it’s a playground for the rich and famous in winter, Aspen is just as good, if not better, in summer (and early autumn too). Maybe I should h...