Inside Disney's Pandora - The World of Avatar attraction 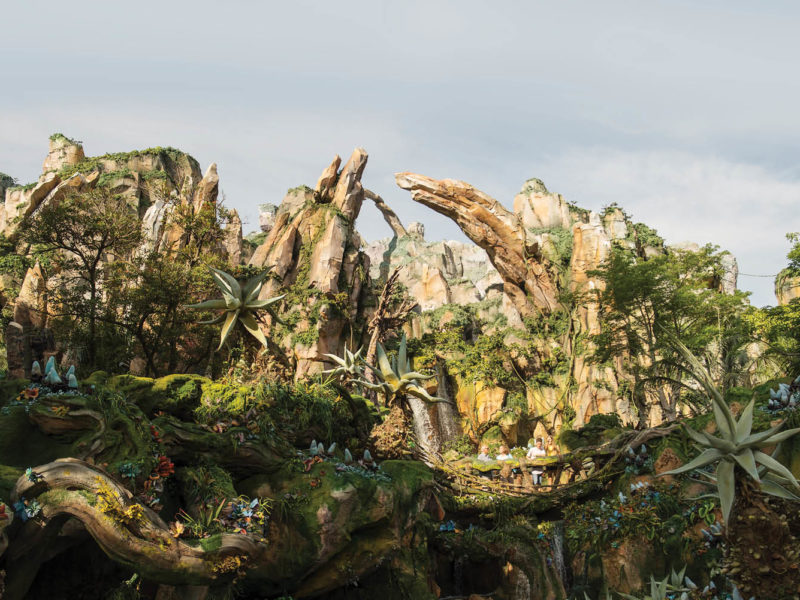 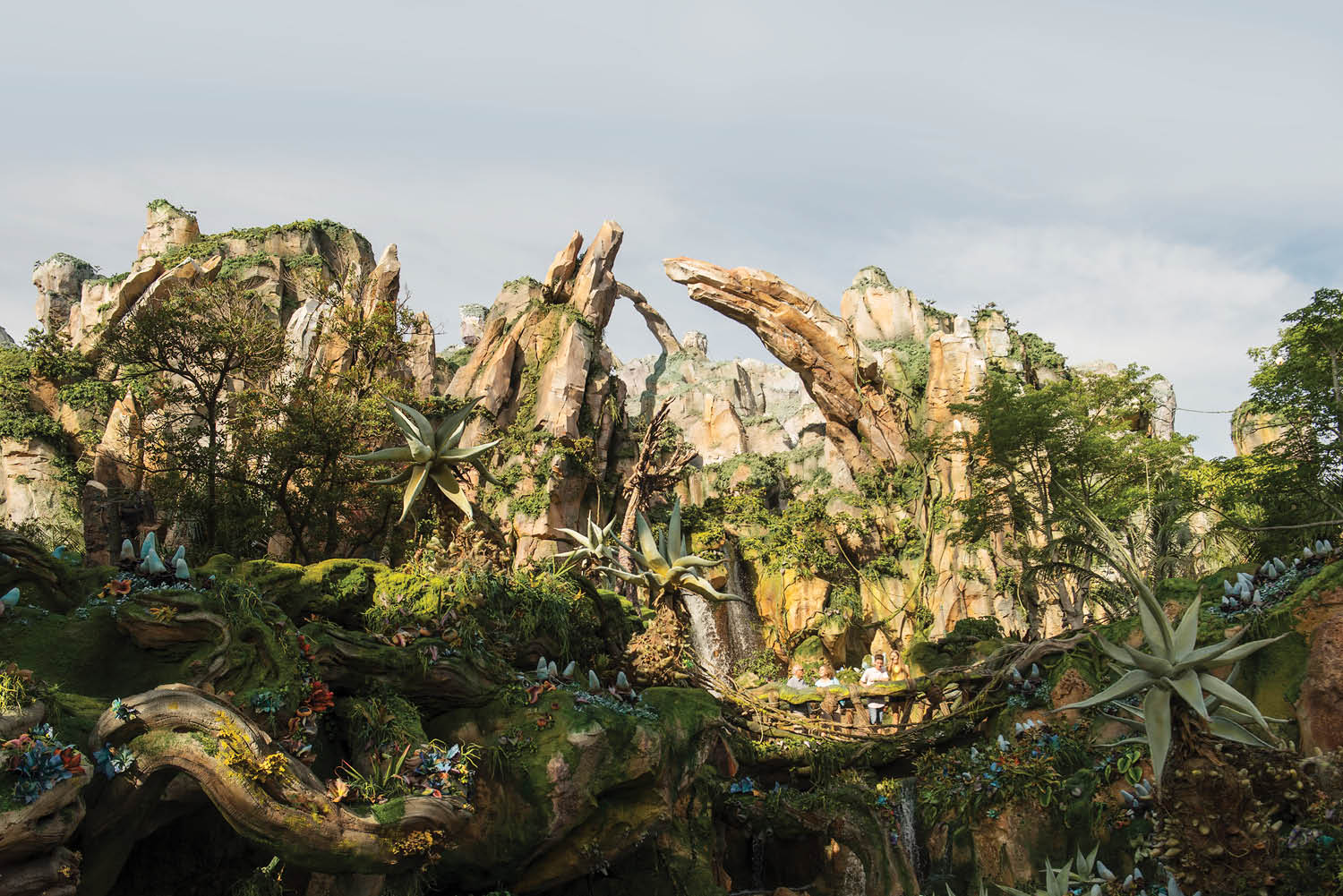 Peculiar rock formations lead the way to Flight of Passage.

an unmissable experience for fans of the film and non-fans alike, finds Daniel Down.

It has to be something special when you can’t stop thinking about what you’ve just experienced and want to do it again and again. Walt Disney World Resort’s new attraction Flight of Passage, which sends you soaring back into the colourful world of Pandora from James Cameron’s Avatar, stays with you, like your brain has been tricked into thinking it’s all utterly real; a bit like a vivid dream, which is how Cameron first conceived of this paradisiacal alien setting when he was just 19. I was lucky enough to attend the opening of Pandora – The World of Avatar, and was eager to make my way through the sprawling new corner of Disney’s Animal Kingdom Theme Park to see how far thrill rides have come; like the 2009 movie, Flight of Passage utilises state of the art technology to help suspend disbelief.

You make your way there past exotic, alien plants cunningly positioned around real tropical varieties to create the feel of an alien jungle, passing right under the floating Hallelujah Mountains from the film, which dominate the skyline. The entrance to Flight of Passage is at the base of some mountains that, using some trick of perspective, appear to stretch off for miles. The path weaves its way into the rock; you’re heading up here to ride a banshee, a beautifully patterned, colourful flying beast from the movie. An engaging narrative is drip-fed along the way, something Disney has become a master at, building anticipation for what’s to come using Hollywood-grade effects and props, taking you on a journey through iconic aspects of the world of Pandora. It’s easy to see why Disney makes the distinction that these are ‘attractions’ as opposed to ‘rides’, such is the level of experience leading up to the actual event.

Even if you’re not a huge fan of the film, you can’t fail to be impressed with what Disney’s team of creative geniuses, the Imagineers, have accomplished here. You pass through caves with displays of rock art depicting the banshees and their cultural significance to the indigenous Na’vi, a rite of passage that Jake Sully (played by Sam Worthington) must undertake in the film.

Before long you enter a night-time forest, lit with the glow of bioluminescent plants. In a clearing there’s a research facility, the concrete, steel and glass of the futuristic lab forming a stark contrast with the tangled roots of the forest. Your path meanders around a central work station and I was able to follow the progress of scientists’ experiments – their hand-written notes and futuristic displays showing the results of tests on organic matter, the Imagineers’ wizardry bringing it to life as a series of black, fluid blobs moving around glass containers. It’s a conservation centre, from which scientists are learning how to safeguard Pandora’s ecology. Another turn and you come across one of the Na’vi avatars – a 9ft-tall blue humanoid in a transparent tank awaiting a human host; it’s an impressive feat of animatronics, moving as if in a deep sleep.

A leap of faith

Through a series of airlock-like chambers and following a briefing by one of the scientists, you enter the banshee-flying test room – you’re here to help the scientists study the Na’vi’s cultural ties to the banshee. You take your seat on a saddle, 3D specs on and you’re locked in place – but in front of you there’s nothing but a steel wall a metre or so away. Then the unthinkable happens: pops of light fizz in my vision and I’m suddenly blasting head first down a colourful tunnel like the psychedelic end sequence of 2001: A Space Odyssey… my mind has been downloaded into a Na’vi avatar astride a banshee. Gone is the steel wall; my field of view is now the gloriously lush landscape of Pandora rendered in 3D, and between my legs I can literally feel the banshee breathing deeply, in and out.

Without warning the beast leaps over the cliff edge, plummeting into the depths, I scream as wind blasts past my face and somehow I can feel a G-force. My banshee swoops upwards just before hitting the jungle canopy and we’re cruising, gazing out over a busy paradise of wildlife: herds of beasts, birdlife and Na’vi hunters cheering my passage as I soar overhead. Above a plain full of grazing animals I can smell the grass; this is a 4D experience akin to Disney’s Soarin’ attraction where various smells are applied to heighten your journey. I also realise that the rate of my banshee’s breathing is changing depending on whether it’s gliding or beating its wings hard to gain altitude.

Soon we’re heading out to sea, and as we fly low over the waves a cool breeze washes over me and I can smell the sea salt and feel spray from the waves dotting my face. Huge whale-like creatures break the surface right in front of my ride and I, forcing me to laugh out loud before we avoid them by flying down the tube of a breaking wave; the closest I will come to experiencing surfing in a perfect pipeline.

It’s exhilarating stuff and I barely have time to process what’s happening before we’re soaring back up into the mountains and being attacked by one of the apex predators, a massive winged beast known as a Toruk. We evade its clutches by taking shelter in a cave, beautifully lit by various glowing fungi. It’s here that we finally come to a stop and there’s a still moment where all I can feel is the breathing of my banshee as seeds from the Na’vi’s Tree of Souls, like airborne jellyfish, float around.

My ride takes me on one last cruise through the valleys and forests before, panting heavily, coming to a rest to allow me to admire the sun setting. I feel myself breathing hard too.

It’s been a long wait for Cameron’s sequel to Avatar, but fans and non-fans alike should head here in the meantime and experience something completely out of this world. Just as the characters in the film are able to download their minds into the titular avatar bodies to explore an alien paradise, so Disney has been able to capture that same magic and send you to a place of wild imagination.

Flight of Passage is a serious adrenalin rush, but there’s a more sedate experience to be had in Pandora – The World of Avatar. Na’vi River Journey takes you into the night-time setting of Pandora: you board a boat and cruise through jungle, which becomes awash with ethereal greens and blues coming from countless bioluminescent plants. Kids will love spotting wildlife among the trees and the feet of monkey-like animals skittering across leaves overhead. You’ll also come face to face with the 9ft-tall form of the Na’vi’s Shaman of Songs, a spiritual leader singing and dancing. It’s an incredibly lifelike animatronic spectacle; you’ll be doing several takes to figure out how it’s all done.

With a script overseen by the Guardians movies’ director James Gunn, Guardians of the Galaxy – Mission: BREAKOUT! is a triumph of storytelling and...