Is Calgary Stampede really the ‘greatest show on earth’? 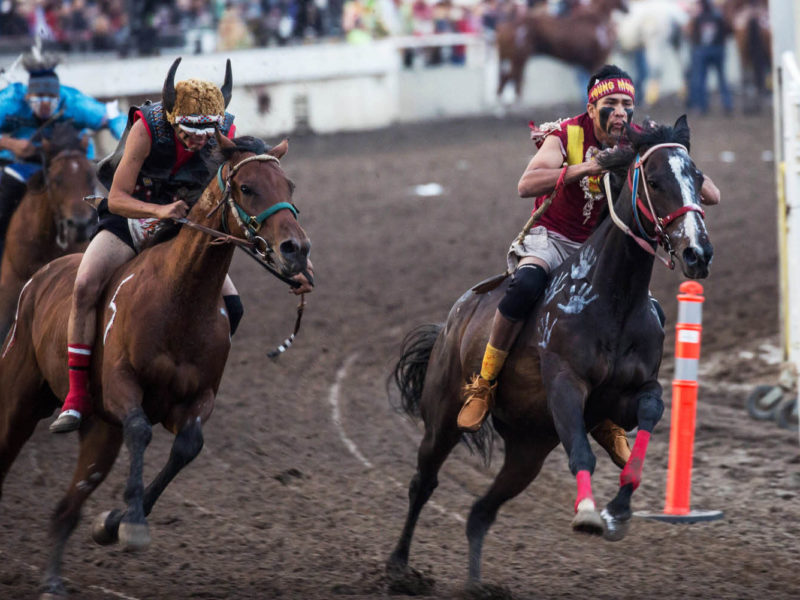 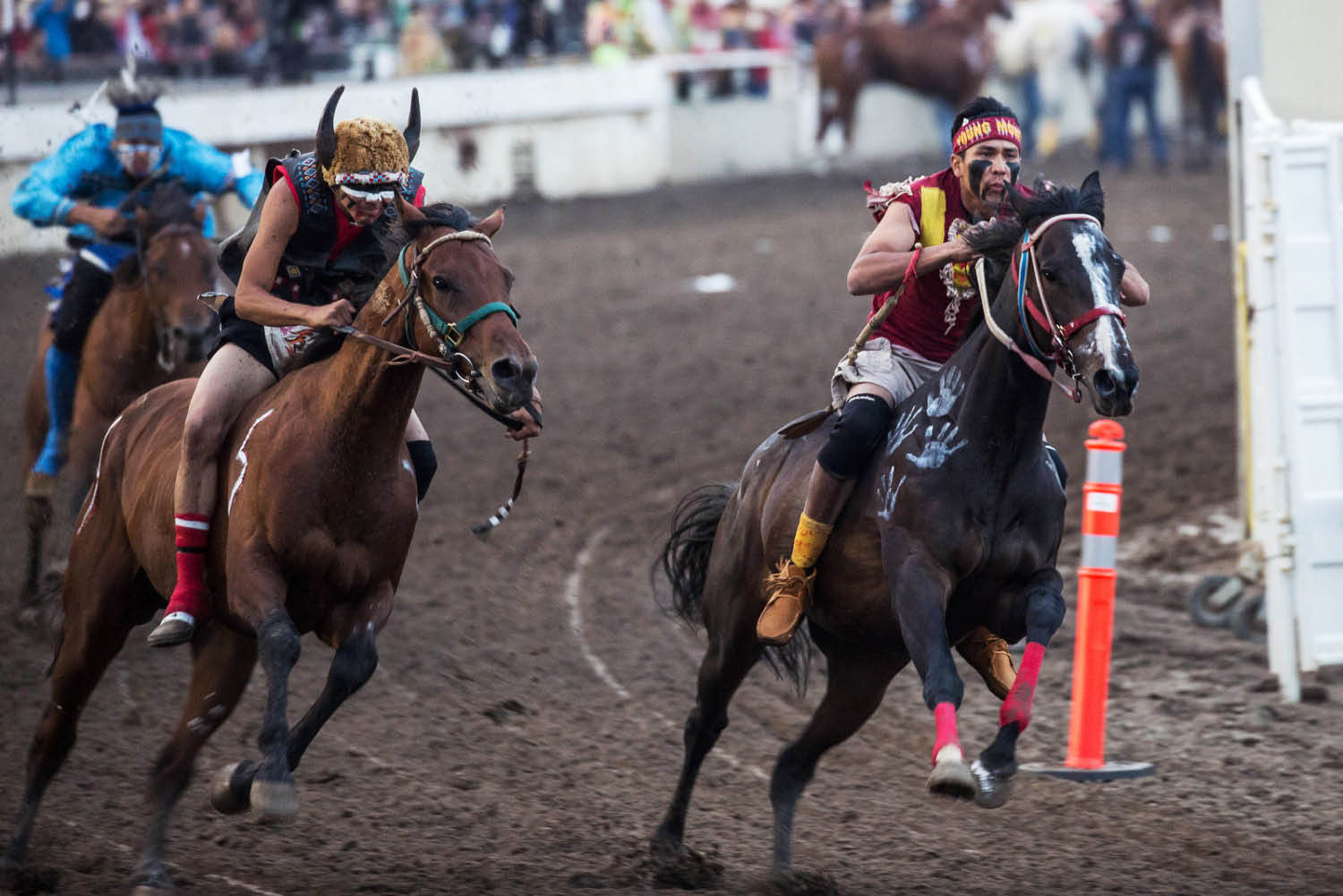 With Canada’s Calgary Stampede done and dusted for another year, we sent a daughter and dad duo to scope out it lived up to the hype, with some surprising results, admits Alissa Jenkins.

For all intents and purposes, my father and I couldn’t be further apart on your usual travel demographic spectrum. Him being the type of grey-bearded bloke you might expect to come out of rural New South Wales, complete with farming roots and a penchant for road tripping around Australia in a 4WD, rather than suffering through an international flight.

Myself on the other hand, a female millennial with a decorated passport, am largely a product of a generation best associated with Instagram, veganism, and avocado-binging. So, finding a destination that united our travel interests was a challenge at best. But as we discussed the potential places that this daughter-dad duo could amicably explore, one stood above the rest, topped in a Stetson hat. Cue, Calgary Stampede.

Taking place every July in Calgary, Alberta (almost 1000 kilometres east of Vancouver), the epicentre of Canada’s oil industry plays host to what’s been billed as ‘the greatest outdoor show on earth’. What started as a humble country fair back in 1886, organised by the Calgary and District Agricultural Society to encourage farmers and ranchers from eastern Canada to move west, has since exploded into a 10-day entertainment extravaganza, attracting over one million people from around the globe every year.

Despite earning the city nicknames like ‘Cowtown’ and ‘Texas North’, it’s an event that promises to go beyond glorifying cowboy life and western culture, with a large chunk of Stampeders having never stepped foot on a farm. Pappa Jenkins, mind you, does not slot into this category.

“The chuck wagons, I’m most looking forward to the chuck wagons,” he professes on our first morning in town, scoffing down free pancakes, served with a side of pulled pork. (Hot tip: As part of the Stampede festivities, the Calgary community bands together to offer a full calendar of free pancake breakfasts across the city, hosted by various businesses and organisations).

“And the usual rodeo events, I imagine there’ll be some good horses,” he adds. Feigning enthusiasm for equine breeding and rodeo events that to be frank, a question mark looms over in terms of animal welfare, my focus turns to hopeful visions of broad-shouldered cowboys and overflowing beers, neither of which are of interest to father dearest. This could be a long day.

Shuffling through the Stampede Park entrance alongside hundreds of others, the air is thick with mid-summer heat, brewing excitement, and the smell of deep-fried everything. We wander down rows of food stalls, promising crispy chicken feet, clam chowder poutine, to bacon-wrapped hotdogs slathered in mac’n’cheese, past clusters of gut-busting thrill rides, as well as a village of teepees, where we learn about the traditions of the Plains Indians. By the time we reach the iconic Stampede Grandstand, today’s rodeo tournament is due to begin.

Kicked off with a colourful First Nations dance display, the atmosphere is electric during a performance of the Canadian national anthem — complete with actual yeee-hawwwing from the audience. Surely this is some kind of world record for the greatest congregation of checked shirts and cowboy hats?

However, the livestock and riders are only half the production. Between charismatic commentators detailing the paternal lineage of competitors (both human and otherwise), and video clips profiling riders like celebrated war heroes, there’s also a never-ending playlist of chart-topping tunes to ensure there’s never a lull throughout the entire spectacle.

Afterwards, Dad and I return to the community of food stalls to refuel on a rack of beef ribs, so sizeable they probably once belonged to a diplodocus. Partway through stuffing our sauce-covered faces we meet Bobby — a grain farmer from Lethbridge who’s also come to take time out from the Stampede frivolities, joining us on a bench seat. Living just two hours south, Bobby tells us he’s come to the Stampede every year since he was a boy, witnessing a significant growth and transformation of the event over the years.

“It’s not like them old days anymore, it was wild,” he says, tilting up his cream-coloured Stetson hat, every bit the Stampede stereotype you’d expect. “Now every little thing is under the microscope with all them animal lovers and PETA folk,” he adds. I bite my tongue. “But there were a lot of crashes, and it’s good to see so many people interested now.”

As one of the self-proclaimed “animal lovers” Bobby has mixed feelings about, I’ve certainly appreciated the presence of signs, video clips, and various other initiatives around the park that highlight the welfare of livestock on show. It’s a fine line holding true to tradition whilst catering to a 2017 audience.

With evening approaching, we return to the Grandstand for the long-awaited GMC Rangeland Derby — aka the chuck wagon races. Much to Dad’s delight, this trademark event sees nine heats, 36 wagon drivers, 216 horses and their teams race around a track to snag a cool $1.15 million in prize money. But for all the horsemanship, skilled turns, and nail-biting finishes, it’s not even the highlight of the night. Once the arena is cleared of wagons and horses, a mammoth stage is hauled in, making way for the nightly TransAlta Grandstand Stage Show.

Well hot damn, neither of us expected this. Like the Super Bowl halftime show on steroids, the next two hours is spent in awe as a 400-strong cast including aerial acrobats, flame-licked tightrope walkers, gymnasts stacked on bicycles, and dance troops that could rival the opening ceremony of the 2000 Sydney Olympic Games, sparkle, swirl, and spring across the stage. Topped off with some colossal fireworks that ring in our ears for hours to come, we amble back to our accommodation, recalling the highlights from our first day.

“You know, the wagons and horses did live up to my expectations, but I think I was most impressed by everything around the rodeo,” says Dad, surprised at even himself for having paid such attention to the goings-on off the arena.

“It was just such a slick production, wasn’t it? Anyone who had no interest in rodeo could still enjoy it,” he adds. And as a someone with minimal rodeo interest, I wholeheartedly agree. Perhaps we’re not such poles apart after all.

Stampede Park, on the south-east end of downtown Calgary, Alberta.

How to get there?

From Vancouver, it’s a one-and-a-half-hour flight over the Rocky Mountains to Calgary, with WestJet or Air Canada. Alternatively, you can do the 11-hour road trip, or take the scenic VIA Rail Canada route, which includes a bus transfer from Edmonton.

Throughout Stampede, the city is alight with events from talent quests and outdoor parties to free pancakes.

Also make time to check out the Columbia Icefields, hike the Canadian Badlands Trail, or visit the Royal Tyrrell Museum of Palaeontology in Drumheller — one of several local dinosaur-digging experiences.